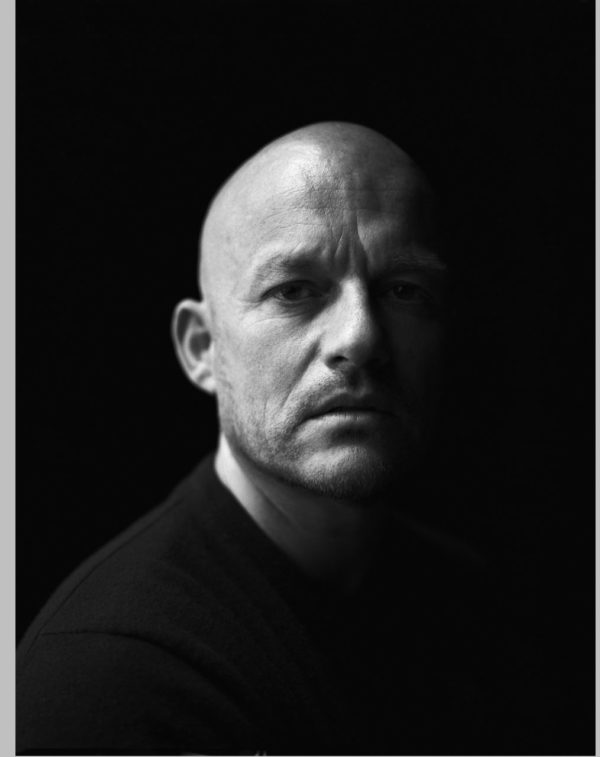 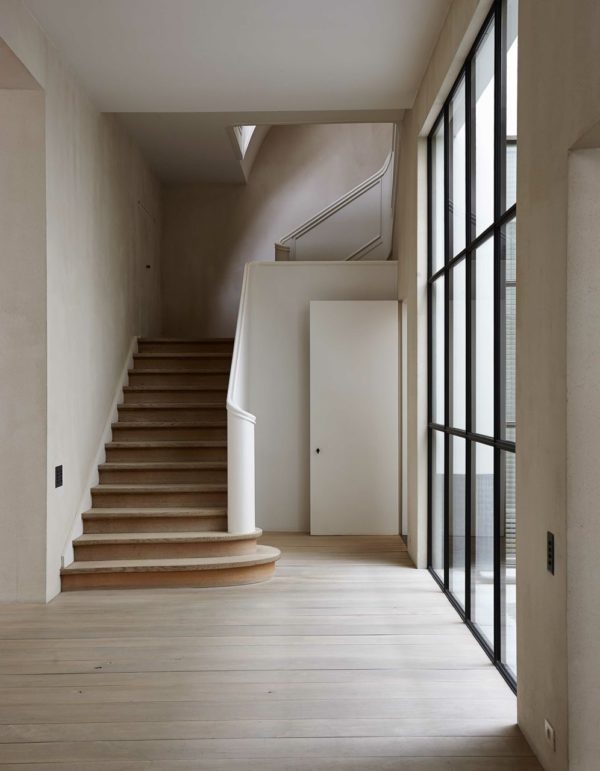 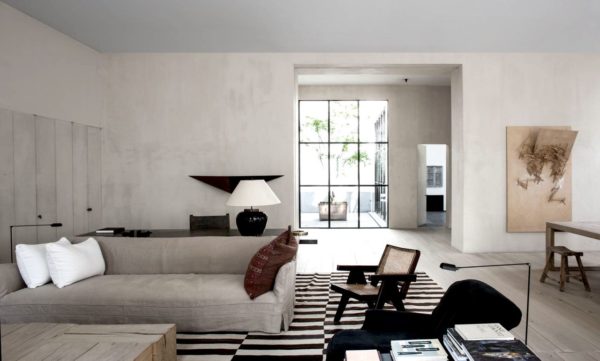 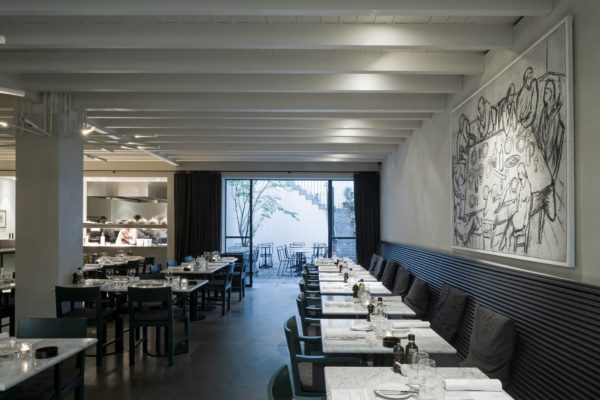 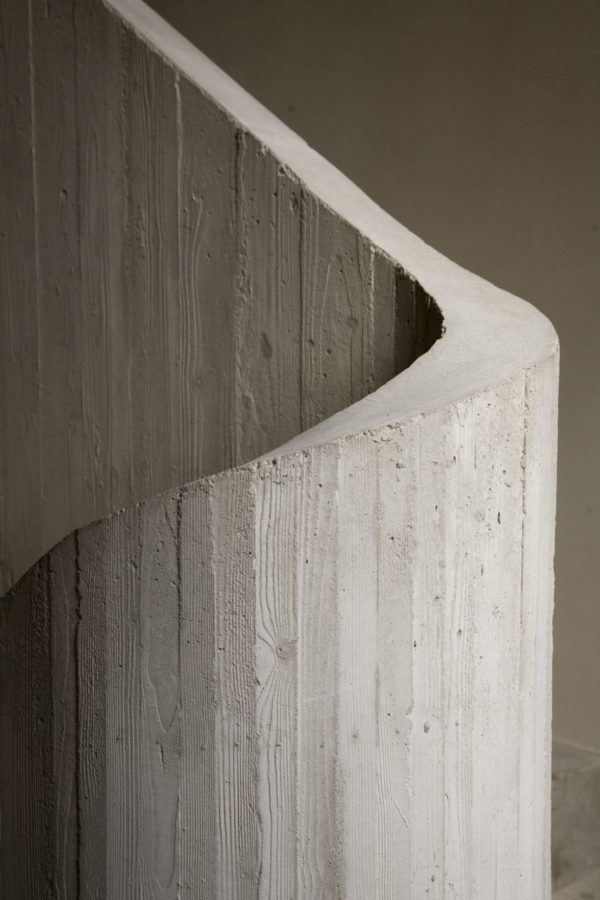 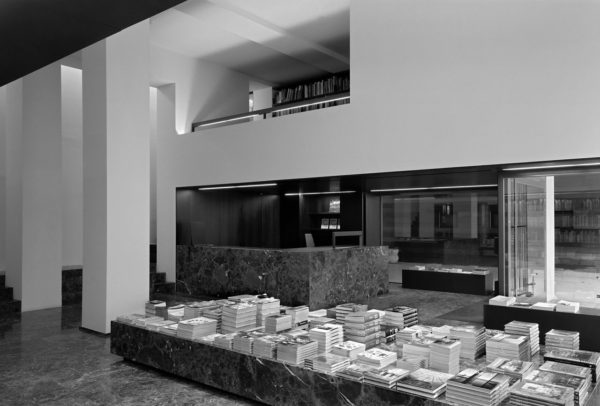 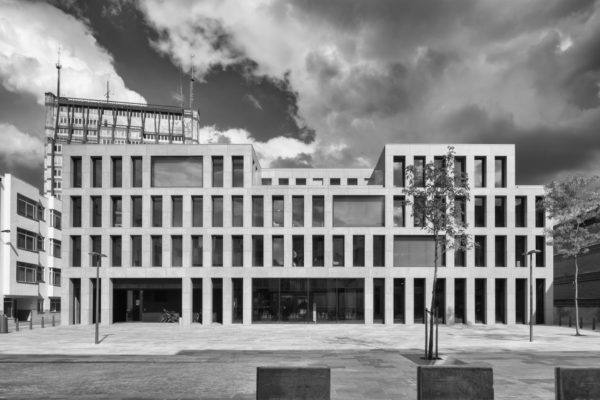 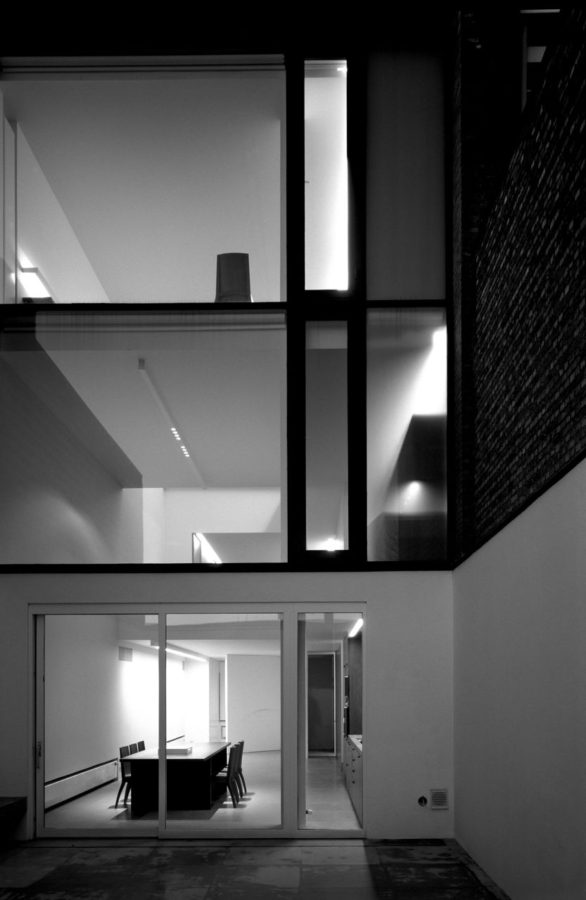 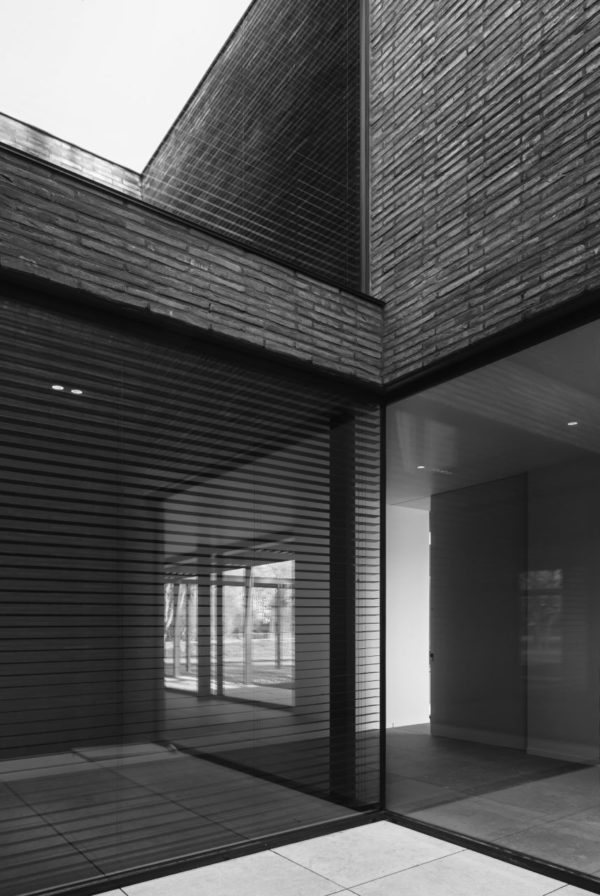 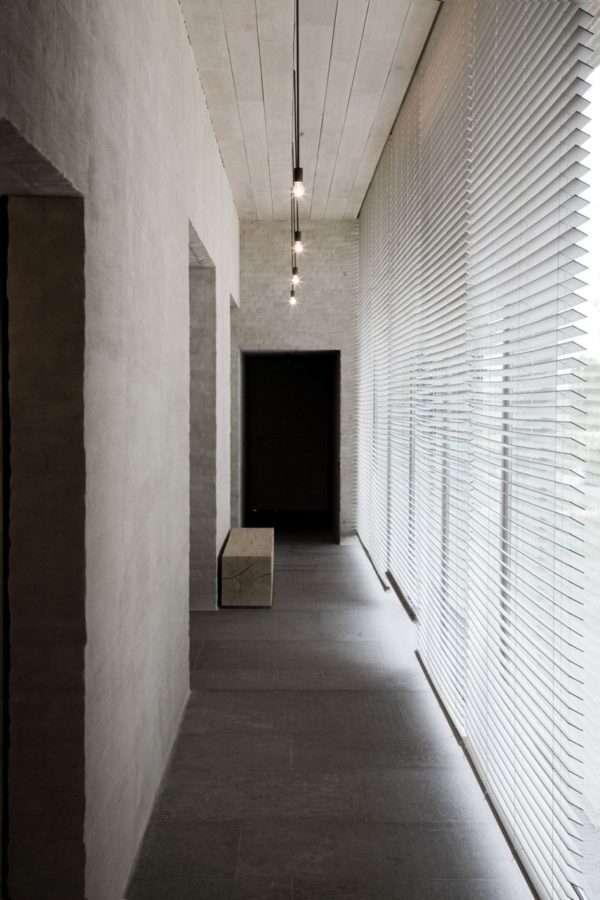 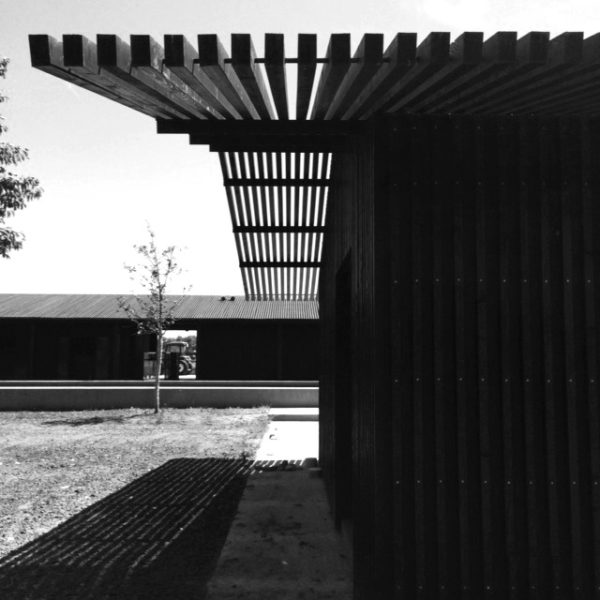 Vincent’s work is human;
it possesses many qualities
that we value in people
It is calm yet determined.
It is reliable yet surprising
It is sensual, but discreetly so.
It is sober yet spirited
In other words, it is like a good friend,
like Vincent himself.
— Ann Demeulemeester and Patrick Robyn

The day before I had dinner at Graanmarkt 13, a townhouse comprised of a restaurant, an exquisitely curated boutique, an art gallery and the owners’ apartment, which is now being converted to a one-room hotel. I noticed the gray concrete, the texture of the surfaces, the clean lines, the oversized black metal lighting. Unsurprisingly, it turned out to have been designed by Van Duysen as well.

Two weeks ago I found myself sitting across from Van Duysen in his office in the center of Antwerp, complete with the chair he has designed for B&B Italia and a wall of books (more on that later). Van Duysen, who is currently juggling multiple projects, from Riyadh to New York, seemed simultaneously tired and full of energy. His iPhone was making constant demands for attention.

When discussing his work, Van Duysen spoke with careful deliberation, often looking away as if not to be disturbed while formulating his thoughts. There was a quiet determination in his demeanor that bespoke careful attention to detail. Unlike many architects, Van Duysen considers the interior of his projects as carefully as the exterior – he can build your house and furnish it down to the most minute object. What he’s into is creating environments.

Van Duysen’s designs are sparse and unobtrusive. He has been called a minimalist, but he does not like the label. His style is more like brutalism with a soul, and it’s that fusing of the opposites that gives his work that ephemeral quality that slowly draws you in. And though some of his buildings may strike a casual viewer as cold, their richness will slowly reveal itself upon a closer look.

Van Duysen did not start out in this style. While studying architecture he also experimented with photography and performing arts. “I was not attracted to studying architecture because of its scientific or mathematical content, but because of its social creative content,” he said. “You have to see architecture in a much broader spectrum knowing that it covers life: people, cities, the world. It engages the individual person with comfort, aesthetics, functionality, and so on.”

Upon graduating in 1985, Van Duysen left Belgium for Italy, not only because of architecture, but also because of his general interest in creativity, which was exploding in Italy at the time. Postmodernism, with its characteristic mix of styles, was the order of the day.

Van Duysen ended up in Milan, collaborating with the fashion designer Cinzia Ruggeri on some furnishings. “I was 22 years old and I was really projected into this extreme world of alternative progressive thinkers. It was a very exciting time,” he said.

After that stint, Van Duysen went to work for the architect Aldo Cibic, who was starting his own practice after parting ways with Ettore Sottsass’s design firm. Whereas Sottsass was all color and visual complexity, Cibic was beginning to move towards simplification. Van Duysen was all for it.

Soon enough Van Duysen began feeling overwhelmed in Milan and longing for the calmness of Belgium. He returned to Antwerp, and in 1990 set up his own studio and began collaborating with two Belgian interior designers. One of them, Jean de Meulder, whom Van Duysen calls “the Andree Putman of Flanders,” became an influence.

A few years later, Van Duysen felt ready to do architectural work proper. His first project was his Antwerp apartment where Van Duysen could fully realize his own vision. “I was able to express what I’ve learned or experienced in the previous years,” he said. “I was more interested in spare volumes, raw materials and neutral palettes of colors, with the combination of textures, whether I was using drift wood with flax linen or rough carpets. I was into a kind of world I’ve learned through my experiences. I traveled to Morocco and the Mediterranean and was attracted to these kinds of archetypical habitats where people were creating their own places without indoctrinations, just for themselves.“

A photo of Van Duysen’s renovated loft made it into a French design magazine. In turn, the magazine made it into the hands of Ilse Crawford, the editor of Elle Decoration UK. Crawford was smitten. She contacted Van Duysen and published a major article on his apartment, calling it “Sensual Living.” The rest is history.

Crawford aptly called Van Duysen “a materials man.” When you see Van Duysen’s work, it is its sheer materiality that gives it weight. He uses texture of materials in lieu of superfluous ornamentation.

Van Duysen’s second Antwerp residence, a house that was formerly a notary’s office, is a perfect testament. I visited Van Duysen’s house the morning after our conversation at his office. The wide façade of the building, unusual for Antwerp where buildings tend to be narrow and deep, is painted white, with the back lacquered door providing the contrast.

The inside of the house is all shades of gray and charcoal and straight angles, broken up by the original spiral staircase. There is no figurative art in the house aside from a large Nan Goldin photo above Van Duysen’s bed. “Books are the best accessories,” he told me, and indeed there were books, hundreds of them, stacked in the living room, the TV room, and the floor to ceiling bookcases in the master bedroom.

There is certain simplicity in Van Duysen’s home. Instead of the living room coffee table there are four great rectangular logs of wood in Tetris formation. The floors are unfinished poplar. But this simplicity is not Spartan. The couches are plush and comfortable; the soft gray colors of the walls (Van Duysen’s favorite hue, which he calls “bone”) are warm.

What Van Duysen is after is not some kind of austere rigor, but calmness, especially in the face of the visual assault of contemporary life. “We’re living all our hectic daily lives so I think it’s important to create this contemplative, comfortable atmosphere in a house where there is a synergy between the outside and the inside,” he said. “It’s about understated, no nonsense space. On the other hand, its beauty and simplicity is surprising, emotional and very poetic, but not obvious, not tricky.“

To add to that feeling, Van Duysen often brings an organic element to his work and goes through pains to achieve a seamless interaction of a house with its surrounding environment. In his own house, there is a small courtyard that is completely taken over by a tree, and the hallway and the kitchen are anchored around it. Once you walk through the French doors of the living room you find yourself in a back yard with ivy-covered back wall and a pool.

That the richness of Van Duysen’s work lies in the choice of materials is not always immediately apparent. I did not realize, for example, that the bathtub in Van Duysen’s house (the same one is in the apartment at Graanmarkt 13) is cut from a single slab of marble. To me this seemed simultaneously more decadent and tasteful than any gilded mirror or a stuffed Chesterfield.

Van Duysen lights up when he talks about materials. “Actually, from the beginning of my career I have been very consequent in the use of my materials,” he said. “They are all natural; lots of wood, stone, even the paints I use have chalk or vegetable base. I love Belgian Bluestone. I love concrete, cement, and obviously brick, which is part of our culture. We have beautiful bricks. I don’t use artificial materials because I don’t know if they’re going to age well.”

Back at the office we talked about some influences on Van Duysen’s work. I mentioned Adolf Loos and his maxim, “Ornament is crime.” Van Duysen replied that Loos is definitely an influence, and that he kept the maxim very much in mind when he was designing the Copyright bookshop, with its floors and main book display made of marble. “Loos was my mentor when I was creating Copyright. The only ornaments we have there are the books and the marble. The marble is a beautiful natural stone that lifts up the book, but the rest of the shop is very rigorous,” said he.

Another inescapable influence is brutalism. When I mentioned it, Van Duysen got up and pulled a book out of case behind me (next to it was a large volume on Loos). It was a monograph of Juliaan Lampens, the Belgian brutalist architect, who happened to be one of Van Duysen’s teachers. “His work influenced my way of thinking,” said he, and added, “I also love Rudolf Schindler in L.A. His brutalism is wonderful.”

A bit of that influence can be seen in Van Duysen’s recently completed public project in Antwerp, the Central Youth Hostel. It is an angular structure made of Belgian Bluestone and glass. “It’s very democratic and it’s very Bauhaus, very utilitarian,” he said, describing the building. “Here I thought I really want to create this environment for the youth. There was a lot of rejection by people that were saying, ‘Why are you using black inside?’ Well, I said, black is the most beautiful neutral color that you can create as a contrast for youth. I mean most of the kids are colorful themselves, and they love it.“

Although the building is completely unlike those surrounding it, for Van Duysen this was an homage to Antwerp, a project he realized from the fundament to the roof and the stone plaza outside, and from the bunk beds to the door handles inside. He spoke of the importance of this building, because even though today seventy percent of Van Duysen’s projects are built overseas, from a residential tower in Saudi Arabia to a Calvin Klein Jeans boutique in Hong Kong unveiled this week, he remains thoroughly Belgian.

“I think it’s unbelievable, the concentration of creativity in such a small city, such a small country,” he said. “Not only in interior and architecture, but in fashion, performing arts, in plastic arts, the food culture. The beauty of it is that we know each other pretty well, but we are very individual. We’re very honest and direct in what we’re doing. And that makes our culture and country unique, and I am very proud to be a part of it.”