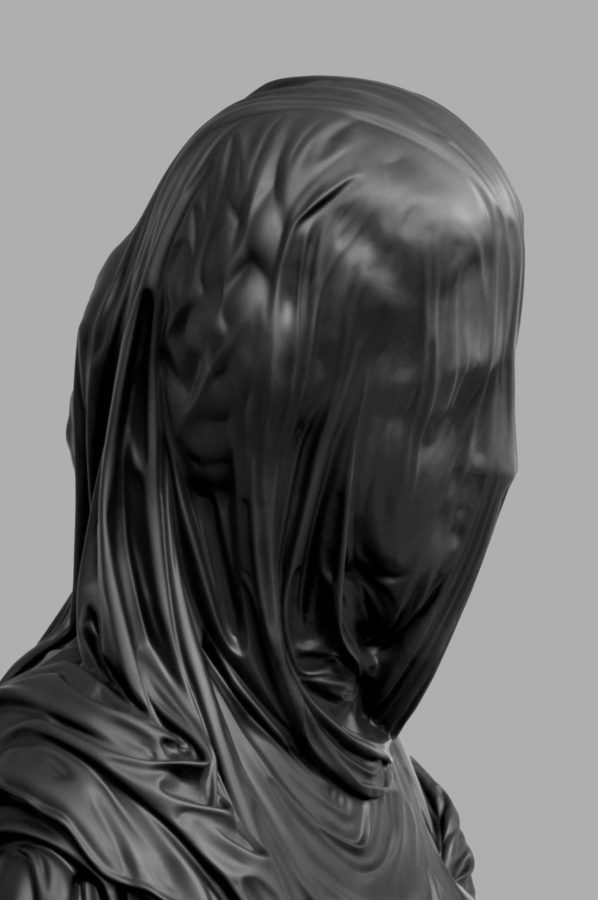 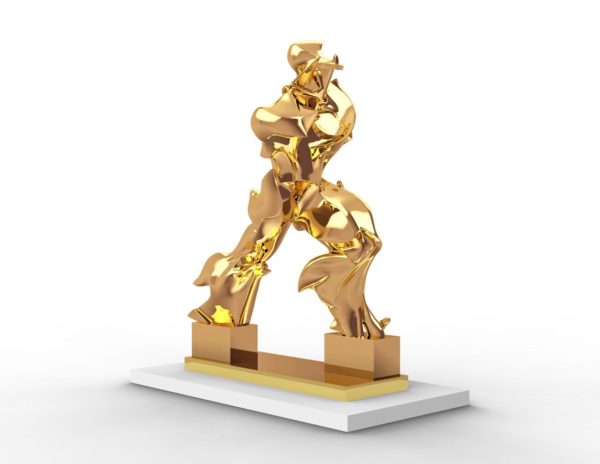 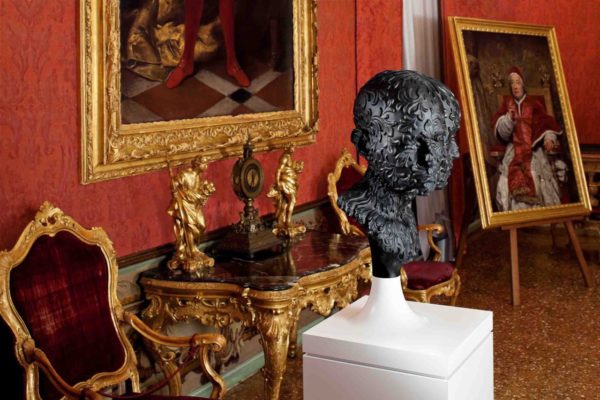 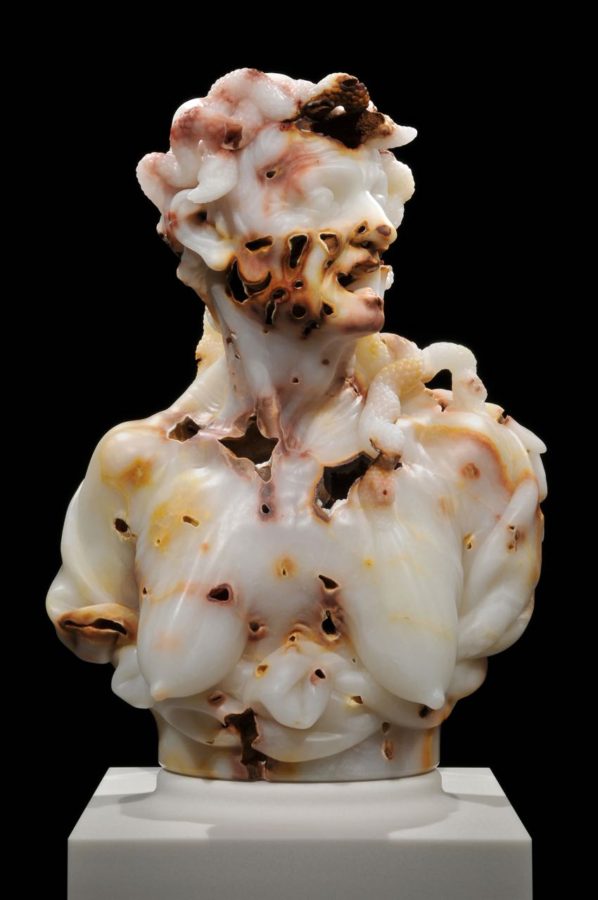 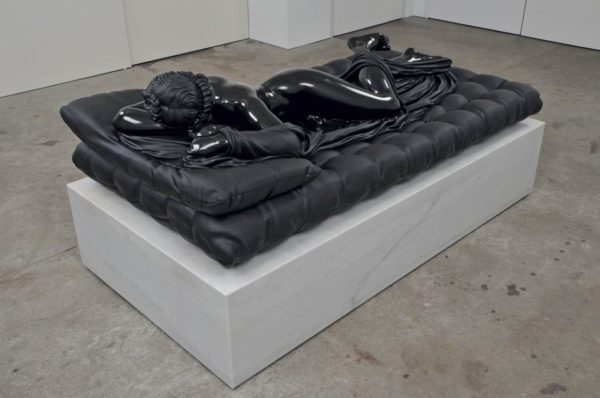 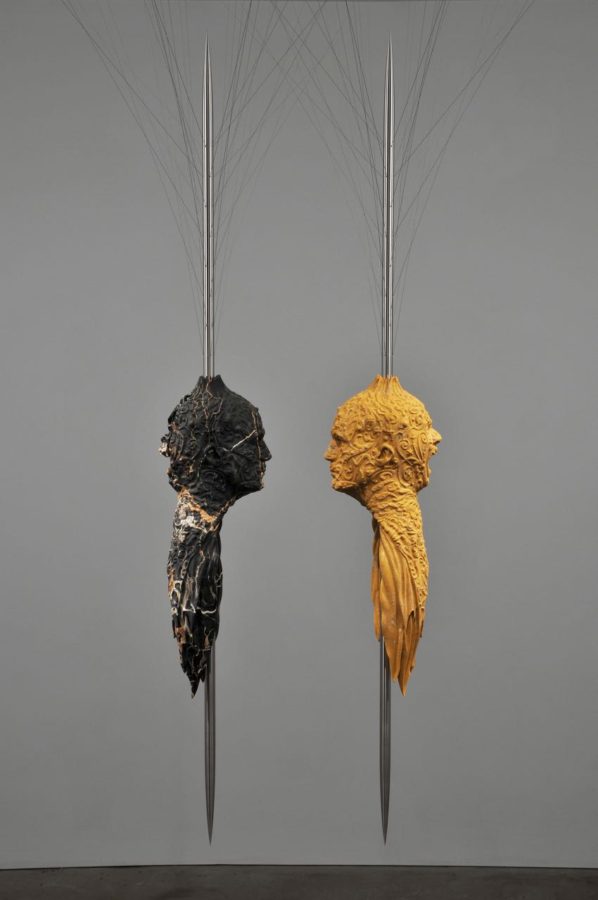 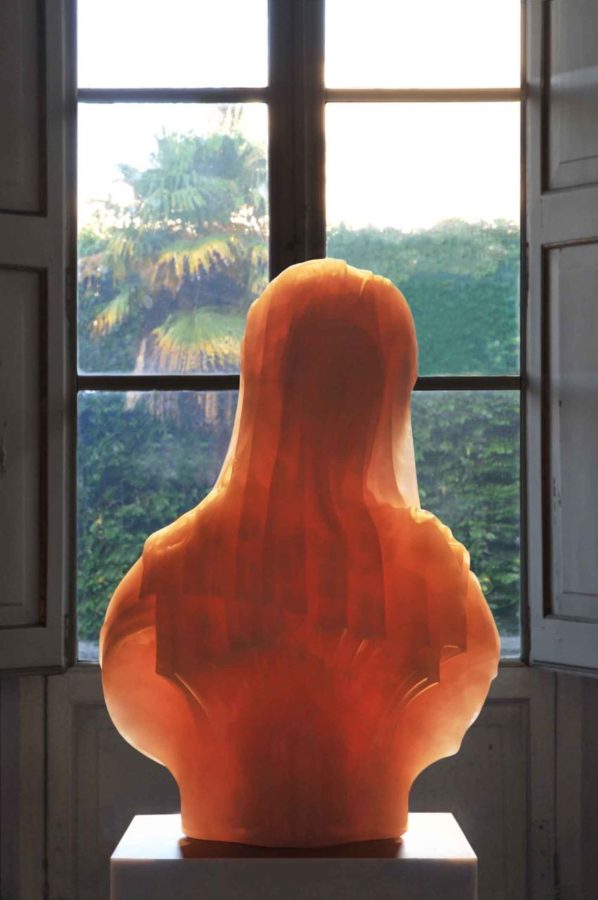 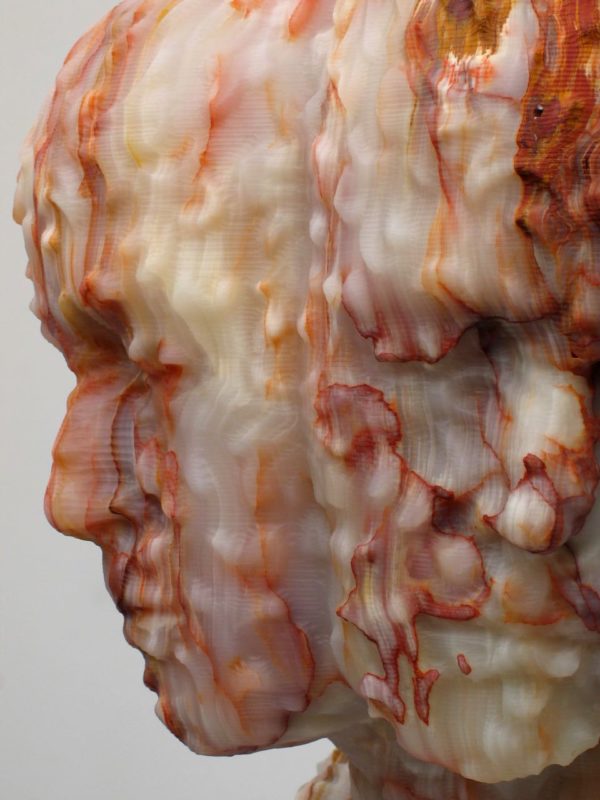 “Those are some of my first milled heads in marble,” Ball said. “I always played with scale and I like the concentration and the kind of intensity of something that wasn’t life-size. It’s almost like a distillation of reality — it’s an old Egyptian trick, I didn’t invent that. But now we want to work larger. I did one large piece, The Sleeping Hermaphrodite, which has been traveling around a lot. And it weighed a ton for the base and for the sculpture another ton. And that was barely doable here with all kinds of histrionics in this little tenement, so it was time to deal with things in a serious way. “ Hence, the need for a dedicated 3D stone-milling production facility on a world-class scale.

This exchange occurred within minutes of our studio visit with Ball. Aptly, it captures so much of what Ball and his work is about. Possessed of a fierce, relentless intellect, Ball deploys his hard-won smarts with generosity; partly because he is self-taught, but more likely because he is hyper aware of the effort required “to deal with things in a serious way.”

It was this intellectual honesty that won over European and Church officials to grant Ball access to 3D-scan sculptures in their collections on site and to return to exhibit his own works among them.

At the same time, Ball is disarming in a wide-eyed Huck Finn way like, for example, the time we revisited the studio and found Ferrari renderings personally dedicated to Ball on his assistant’s desk.

Ball had the opportunity to visit the Ferrari design offices and he sang us their praises – not as luxury goods makers, but as craftsmen. Where I saw only a luxury sports car, Ball saw the perfect curve, realized by long hours of engineering and handcraft. As an artist in whose studio time slows down and where nearly two thousand hours go into a bust after the 3D machines have done their thing, Ball delights in that curve because he knows what went into it. The author Robert Pirsig once wrote in his book “Zen and The Art of Motorcycle Maintenance” that art and technology are not far removed, because both deal with the making of things. Nowhere you could see this better than in Ball’s complete understanding of what care, pride of workmanship, and desire for excellence that goes into a Ferrari, as it does into a sculpture.

Ball let me in a bit on why he chooses to revisit classic art. “That model of the world beating a path to your door and you’re doing whatever the hell you want is a pretty late development in the history of art. Everyone was a hired gun. Sculpture especially because it is pricey to make. Stone was really hard to get. So, sculptors worked to an order. ‘I will deliver to you the allegorical figure of Envy. It will be this size. It will be in white Carrera marble. ‘ And they got the front part of it done, and they knew it was going to be on a niche, or up on a wall, so the back part wasn’t finished. I’ve looked at a lot of great works, at Roman works… they all seem unfinished to me. I just feel you can go further.”  One look at the back of a Purity by Ball and you get a sense of just how far further can be.

Ball is a self-taught Californian, a tinkerer who grew up solidly middle-class American, until he began learning art history in college, which blew his horizons wide open. He became a self-described “worshipper of all things from the past.” “But,” he continued, “I also see all the exigencies of their production, the compromises, and the terms that must have informed that.”

“There have been very few times in the history of art where somebody had the set up that enabled you to go crazy. Egyptian Amarna period portrait sculptures are exquisitely jewel-like. Some state gifts, like the things you have in the Vienna Kunsthistorisches Museum, all those crazy kunst und wunderkammer objects, those are amazingly crazy. That’s kind of what I’m going for. Even on a large scale. “

At one point Ball even likened himself to a producer, a “setter in motion” he said, so the craftsmen, both digital and hand, can push their skills to the fullest.

In this sense, Ball occupies a place in the contemporary art world that is hard to define. Some “see” only copy (“see” in quotes because they probably only ever saw a jpeg). Others see fetishized technology (if you stop reading at 3D milling machine, perhaps). I even came across reference to Ball as an artist who does not make anything (I will get back to you on that one).

There is noisy talk these days that creative work will soon go the way of certain manual labor and become extinct, like the chimneysweep. Software will henceforth produce screenplays, TV shows, journalism, architectural renderings, and clothes design. This is probably already happening for all I know. The role of human beings in this scenario is that of exercising judgment, of choosing the best from the algorithmic possibilities and perhaps tweaking it. Perhaps what the future generations will come to see as remarkable in Ball’s work is the exercise of artistic judgment. What they will miss is the self-created know-how and the daily struggles that go into Ball’s production.

That undefined space is all his own though, which is fitting for an artist who remarked to me only half-jokingly that he is only starting at the point where most other sculptors today think they have finished.

One has to delight in the fact that Ball turned to the local woodworker responsible for Donald Judd’s sculptures and to precision glass makers to help construct the display cases for Unique Forms of Continuity in Space.

Even more delightful is that the polishing for “Unique Forms” which helps render the sculptures liquid in the light rather than anime-mechanical, as we have come to know it, was done by a North Carolina man in his garage. That same man devotes most of his working hours to polishing Nascar trophies to a perfect gleam.

It was a revelation to me to learn from Ball that the various versions of Unique Forms of Continuity in Space by Umberto Boccioni that we know are posthumous castings. Where the rest of us stop and denote a masterpiece in a museum gallery, Ball sees a project waiting to be taken closer to perfection and is modest and intelligent enough to know when to include the experts in the project.

I am reminded too of remarks Kirk Varnedoe made about Donald Judd in his Mellon lectures. “There is something small-time and peculiar about the fabrication of a lot of minimalist works that suggest not industrial mass production, but old-fashioned craftsmanship. In this sense, minimalism seems to express a nostalgia for small-product America, for chopper shops and body shops or businesses that make metal door frames or install aluminum siding.” It is just this native sensibility that Ball and his studio assistants push to its furthest extreme.

And remember this, the next time you have opportunity (and I hope you do) to see a sculpture by Barry X Ball in person: by making uncompromising standards for himself and his work, he has made our, the viewers’, job easy. “I think that the viewer, collector, gallery, whoever, will never see the thousands of individual differences, the little details that we pay attention to. I just believe that cumulatively it has a buzz. That there is a vibration to an object that is made like that. That it just feels different.”

A dual-portrait, realized at 100% scale, in the rare, uniquely un-figured black  marble known as ‘Belge Noir’, exhibiting a layered ‘sfumato’ surface suffused  with miniscule opposed-diagonal fluting overlaying a coincident enveloping  foliate relief. In culmination, a glistening “Rorschach” garland – symmetrically  splashed, sharply-delineated, avian, sinister – traverses the work’s midline. The  artist-designed integral / modular base / pedestal unit, its tapering parabolic  sweep flowing into the sculpture’s glass-polished flute stem (which, in turn,  terminates in a silhouetted arboreal fringe), conceived in parallel with the  sculpture, precisely-fabricated in stainless steel, acrylic-spray-lacquered  aluminum and wood (and a variety of subsidiary materials) by a studio- coordinated consortium of disparate fabricators, is reminiscent, alternately, at its  apex, of traditional ‘socles’ and Saarinen furniture pedestals. Here, in an attempt to  reinvent and reinvigorate the sub-genre of romantic portrait sculpture, the  artist has conjoined his signature fever-pitch execution intensity and a newfound  conceptual tenderness. The resultant bilateral Janusian abstraction, created with  deep reverence for and specific focus on the history of sculpture, makes an  expansive case for the critical reconsideration of prevailing contemporary  practice, while simultaneously probing both the subject’s psychology and her  complex relationship to the artist. The stony double-surrogate captures, in soft  Galatean contravention of its obdurate materiality, a moment of poignant reflection, reflected.

A dual-portrait of the artist’s New York gallerist, realized at 85% scale, in an  exceptional specimen of dramatically-figured, exuberantly-colored translucent  onyx, selected for veination and contrasting opacity so as to differentiate the  mirrored images, exhibiting a layered surface suffused with a ‘sfumato’ overlay of  foliate relief and coincident miniscule circumferential terracing. The artist- designed integral / modular base / pedestal unit, it’s tapering parabolic sweep  flowing into the sculpture’s glass polished flute stem (which, in turn, terminates  in a silhouetted arboreal fringe), conceived in parallel with the sculpture,  precisely-fabricated in stainless steel, limestone, acrylic-spray-lacquered  aluminum and wood (and a variety of subsidiary materials) by a studio- coordinated consortium of disparate fabricators, is reminiscent, alternately, at its  apex, of traditional ‘socles’ and Saarinen furniture pedestals. Here, in an attempt  to reinvent and reinvigorate the sub-genre of romantic portrait sculpture, the  artist has conjoined his signature fever-pitch execution intensity and a newfound  conceptual tenderness. The resultant deceptively-diminutive bilaterally- symmetrical Janusian abstraction, created with deep reverence for and specific  focus on the history of sculpture, makes an expansive case for the critical  reconsideration of prevailing contemporary practice, while simultaneously  probing both the subject’s psychology and her complex relationship to the artist.  The stony double-surrogate captures, in soft Galatean contravention of its  obdurate materiality, a moment of poignant reflection, reflected.