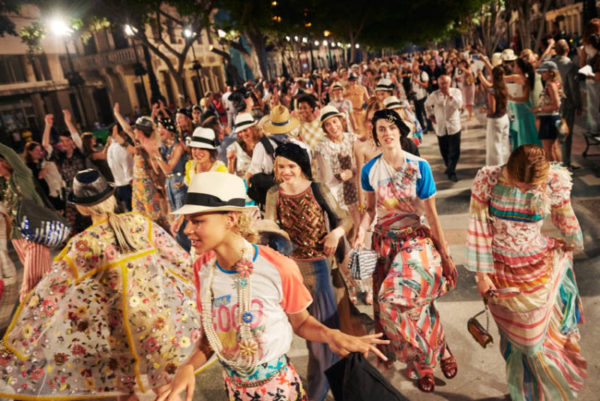 A while ago I wrote about the need for divorcing fashion from politics, and I mentioned that often fashion is incredibly tone-deaf when it comes to current events. The recent Chanel and Louis Vuitton pre-collection shows – displaying clothes for the ultra-rich in the poverty-stricken Cuba and Brazil – are only reinforcing this view. As expected, virtually no one in the fashion media – pretty much everyone who covered the events was flown in, put up in a hotel, and wined and dined by the brands – dared to speak up. The shows got overwhelmingly positive coverage, even from seasoned journalists at major newspapers who are usually not afraid to speak their mind.

Chanel staged its show in Havana, shutting down a section of the Prado boulevard, its main thoroughfare, and paid for 700 people to come see it. It was billed as a “celebration of Cuba’s cultural richness,” but few Cubans were actually allowed in – they were cordoned off behind a police line a block away. As usual, the show was reserved for the international rich and the global fashion press elite, and the whole thing had a strong whiff of neocolonialism. The dissonance between showing ultra expensive clothing, complete with a beret reminiscent of Che Guevera’s, in a country where most people struggle to find basic goods was not lost on “the natives.” Unsurprisingly, the Cuban intellectuals lashed out, “It would be hard to overturn a revolution, much less Cuba’s revolution, by closing the Prado boulevard to show off the cruise collection of a famous French brand,” wrote Sergio Gomez, a Cuban columnist. “But the way in which these events are interpreted, in the context of a process of change that will define the destiny of 11 million people, can subvert the social consensus that the country has maintained for more than half a century.”

In his review for the Business of Fashion, Tim Blanks wrote that “the fundamental incongruity of the moment was lost on no one.“ And yet, there was not a peep out of the fashion press about the aforementioned incongruity, with very few exceptions. Even then, someone like Vanessa Friedman of the New York Times – who was not flown in – refused to take Chanel to task, wondering out loud, “Who is to say those benefits do not far outweigh the moral ickiness of promoting very expensive clothes for the very few in a country where no one can buy such clothes?” Who? Well, why not you, a fashion critic for a major newspaper?

The rest of coverage was dutifully and mind-numbingly positive. Which means one of two things – either the fashion press elite are dumb or cynical. Neither option bodes well for the fashion press if it is to retain a modicum of respect.

Even Blanks wrote in the same article, “But you could also say that something the two men have in common — aside from the fact they’re both in their 80s — is the ability to imagine a world and bring it into being.” Technically you could, but just think about the differences between those worlds.

Those who are familiar with Blanks’s writing know that he is a gentle critic and his writing often demands reading between the lines. As for the rest of the fashion press, they opted out of any commentary whatsoever, simply describing what they saw and often pasting straight from Chanel’s press release in lieu of original commentary, the way Nylon magazine did. I wished to see what the usually direct Cathy Horyn would write, but no article from her appeared. The fashion press is in complete awe and fear of Lagerfeld and the Chanel marketing muscle. Has anyone from a major fashion media outlet ever written about what Chanel under Lagerfeld actually produces – finery for the haute bourgeoisie, with little to no cultural significance or meaning outside of signaling status? Has anyone called Lagerfeld out on his egotistic, “Apres moi le deluge,” approach to showing it, whether rubbing Cuba’s nose in things they can’t have, or staging a couture show as a pseudo-feminist protest in Paris? 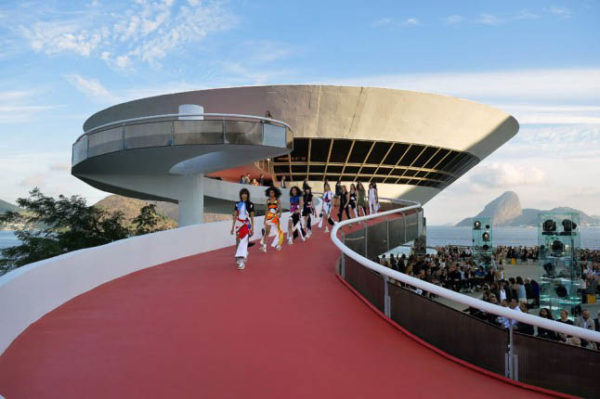 Last week’s Louis Vuitton resort show in Brazil was no better than Lagerfeld’s shameful Cuban extravaganza. Between the fresh economic crisis, the political corruption scandal that has its President, Dilma Rousseff facing impeachment, and the Zika virus, today’s Brazil hardly seems like an ideal place to show off luxury fashion. But that did not stop the company, which flew in 500 guests for the show at the Oscar Nieymeyer-designed art museum in Niteroi, next to Rio de Janeiro.

Again, the corporate brass insisted that the show was to celebrate the country and not Louis Vuitton’s ability to exist in a parallel universe, where things such as a moral compass are apparently unnecessary. “Brazil is about color, it’s about positiveness, it’s about the future, it’s about the body, it’s about a strong woman,” told Michael Burke, Vuitton’s president, to Associated Press. Tell that to the sixteen-year old girl who was gang-raped by thirty men in Brazil the day of the show. He went even further, explaining that Louis Vuitton’s magnanimity in having spent a lot of money on the show. “This was much more than a fashion show. It was about showing our love for this country, out appreciation, about giving back. Is it a humanitarian activity? No, I wouldn’t go that far. But it has a little bit of that.” Once again, capitalism rolls in to a deprived but exotic country, pays for its privilege, and leaves.

The reaction from the fashion press was predictable. Few noted the contradiction in passing, refusing to engage in meaningful analysis – Alex Fury for the Independent was a notable exception. For the most part it was either the shrugging of the shoulders, like by Eric Wilson for InStyle, or the same litany of oohing and aahing.

By now few people who know how the fashion media works are surprised or outraged. Positive coverage is often bought by brands indirectly, through advertising or sponsoring press trips, or more increasingly directly. Even the voices of the fashion columnists for major newspapers, traditionally more critical than those of the fashion magazines, seem to be muted. On the one hand, if we know that this is the status quo and fashion is just dumb, pretty, and expensive, why do we bother lamenting? But the problem is that fashion wants to be taken seriously. It wants to be art, it wants to be in museums, it wants to have meaning, and it wants to be part of the global cultural conversation. But such a conversation is impossible if the fashion press has largely been defanged. In order for fashion to be taken seriously by society, it is necessary to have a vibrant, healthy fashion press open to debate and constructive criticism. No such thing exists today.