I started StyleZeitgeist on a whim, because I wanted to find like-minded people who valued fashion for its aesthetic expression, cultural connection, and for its craft. I became a fashion fan by first being a music fan. I saw the connection between what my favorite musicians wore and their music, and I saw that both could express the way they felt about the world. I did not know that there were fashion designers who felt the same.

One day in the late 90s, I walked into Barneys in my oversized, ill-fitted perfecto and my crumpled black jeans, and for the first time I came across the work of such designers as Ann Demeulemeester, Raf Simons, Rei Kawakubo and Yohji Yamamoto. I never looked back. I had no idea who these creators were, but I knew that they had to have similar cultural affinities in order to create these clothes. Their work was the bridge between them and me. We did not speak personally – not yet – but they spoke to me through clothes. In the subsequent years the vocabulary of this language has only become richer as the likes of Undercover, Number (N)ine, and Rick Owens came along. There were also the more obscure, outside-the-system designers like Carol Christian Poell and the Carpe Diem family, and that of Boris Bidjan Saberi and Julius, among others.

At the same time I started writing about fashion. In my work, whether writing or running the forum, I have tried to stand apart from the popular image the word “fashion” implies – that shallow, materialistic, status-oriented, marketing-driven, vacuous machine. I knew there is more to fashion than that, and so did the thousands of people who have joined the forum and who have read StyleZeitgeist magazine. I hope I have succeeded more often than not.

We will have a concert by a band whose music is dear to my heart (we will reveal the name in due course), and an afterparty. We will also open a four-week pop-up shop with exclusive products from designers such as Rick Owens, Ann Demeulemeester, a special project from Undercover, Iris van Herpen, Boris Bidjan Saberi, GUIDI, m.a.+ and many more, all either specially created or customized for this pop-up. There will be art work from the tattoo artist Thomas Hooper, from the photographer Nicholas Alan Cope, and objects from the Belgian product designer Michael Verheyden.

I welcome you all. 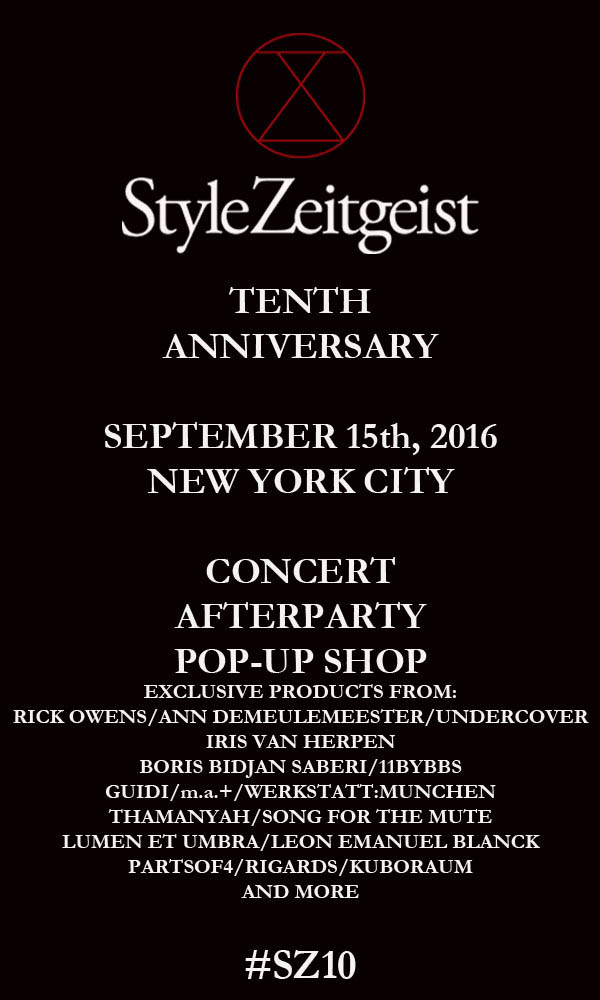