Francesca Woodman: Nothing but Herself 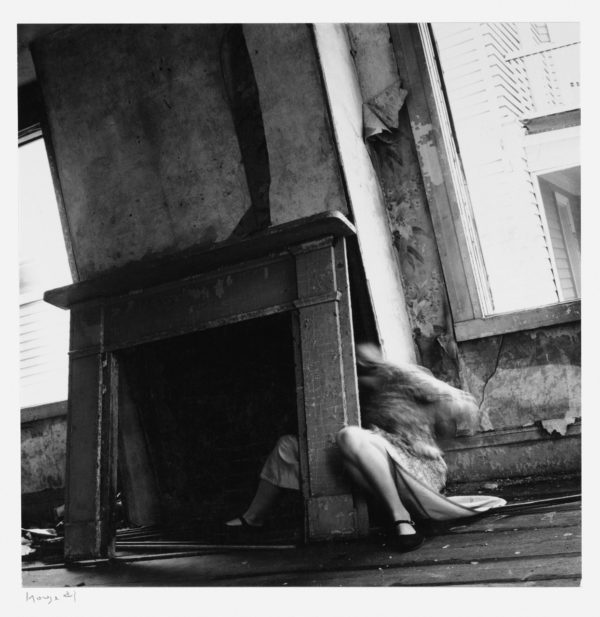 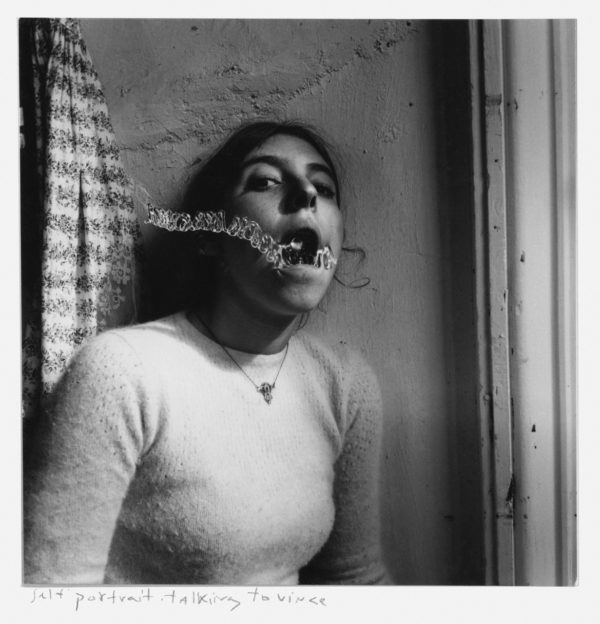 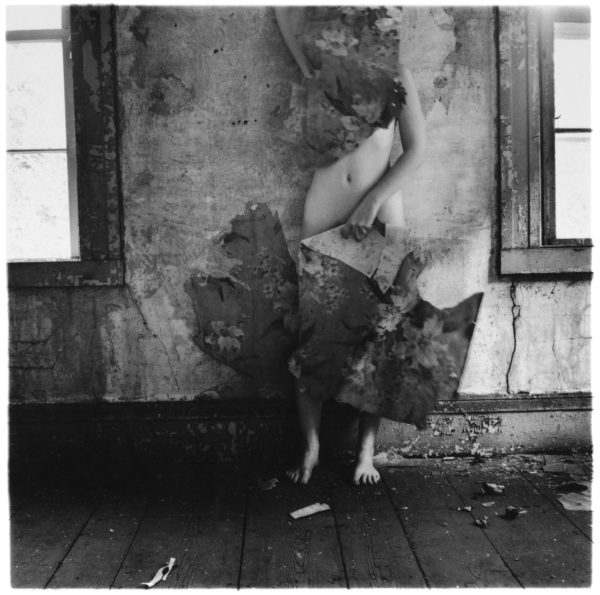 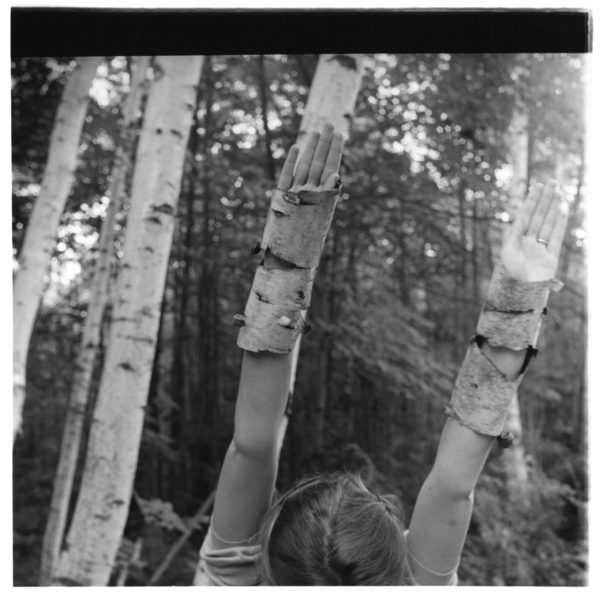 Upon parting ways with the 120 or so vintage photographs, artist books and short videos installed in the Guggenheim’s Francesca Woodman retrospective, I found myself feeling, oddly, a little more solid in my own skin.  Because these photographs emphatically exclude any sense of exterior setting, color, narrative, time, the weather even, and, in withholding anything that could be considered photographic information, they draw one in – literally, these prints are intimately sized about 5 inches square, so you’ve got to get your face into them – to focus one’s gaze on a particular young woman who, in print after print, conjures forth herself amidst natural light, scuffed wood, crackling paint and peeling wallpaper.  And she does it masterfully, each time getting to exist, just more so, in a way that only the physical, photographic print seems to have managed do for her, until she killed herself at the age of 22 in 1981 in New York City.

The show opens with an early and stunning image, “Mannequin,” shot in the RISD Nature Lab.  The photograph is of a wood–framed glass vitrine with taxidermied animals, tightly framed and shot from a downward angle. Curled up and squeezed onto the bottom shelf, lies a dressed Woodman, still as a doll.  A specimen herself, she’s become a natural object of her own photographic inquiry.  The only subject she ever needed, as it would turn out.  The arc of the show is set from this image on, as one rounds the gallery from the Providence works of 1975-78, to the 1978 “Swan Song” RISD thesis, to photographs made during her junior year in Rome, and some places in between, finally ending at the grand, beautiful caryatid figures of the 1980 “Temple” project.

Tiny, black and white, these photographs present Woodman, nine times out of ten, in an abandoned or rundown interior, her face or body smeared upon a plane of glass, seated heavily, blurred into the walls, vanishing, reappearing wrapped in plastic, her form sculptural,  often naked,  becoming an element of the interior decor herself.

At times the photographs are sun-blasted; others are lush in their infinite grays and flat light.  My favorite may have to be “On Being an Angel”  in which Woodman has photographed herself arching backwards, her overexposed, nearly upside down face in tight close-up, a disheveled interior in the background.  It is ecstatic, fiercely physical, drenched in light, and forensic: get close enough and you can make out wisps of armpit hair, glowing in the light.

Considering how often Woodman photographed herself unclothed, hardly any of the images are sexually provocative.  Those that are, are self-consciously so, and thus among the weaker images presented.  Despite her youth, there is relatively little self-pity, posturing, outward rebellion or the trying on and casting off of personas. A photograph like “Space2,” in which her body is sandwiched and concealed within torn wall paper and the stained, cracked wall, flanked on either side by the straight lines and rigid 90-degree angles of window frames and wide wood floor planks, are more hypnotic.  Crumbled plaster, paint chips, pale white ankles and bare feet.

The pictures are weakest where they become concerned with representing ideas – and when the outdoors or other people are permitted to intrude.  Instead, the amazing thing is to see how much Woodman was able to accomplish with a square format camera, natural light, her self and a few abandoned rooms.

Admittedly, it is a bit absurd to speak of “late style” with respect to an artist 20 years of age, but the large scale (life size) caryatid photos of the “Temple” series that close out the show are invested with the perfectly pared down simplicity and sense of technical mastery one has come to expect from an experienced photographer.  A lifetime’s worth of thought, struggle and craft condensed into 5 years.

Upon moving to New York City, Woodman took up fashion photography in order to combine her artistic talents with a marketable trade, and it is evident that she was a masterful stylist and stager of a body in space with a real sense for proportion, for clothing, for the play of light over a body or an object.  This talent is on display in the four  “Temple” diazotypes, a technique associated with the production of architectural blue prints involving long exposure times that renders them soft in tone, bluish black, and painterly.  When printing on a large scale Woodman would roughly and unevenly trim the prints, almost as if to counteract the artwork preciousness inherent in such large scale prints and draw your attention back to their physical attributes as objects.  They are monumental in the best sense of the term.

Leaving the exhibit I thought that it is a strange thing, to be a person occupying some space in a simple room.

All images © 2012 George and Betty Woodman