At StyleZeitgeist magazine we count the menswear editorial, “America Still Likes Me,” one of our proudest moments. Based on the Joseph Beuys’s 1974 infamous performance piece, “I like America and America Likes Me,” it was published in volume 2. We have tried to recreate everything as it was, down to the hay, the felt, and the newspapers. The gorgeous creature playing the part of the coyote is actually half-wolf, half-husky.

Beuys was an artist who paid particular attention to clothes. He considered it, especially felt, protection from the cruel world of men. We have asked some of the designers we love to provide us with garments that would reflect Beuys’s own dress and thanks to their enthusiasm we were able to pull together a beautiful selection.

One of these designers and one of the few remaining artisans of fashion, Geoffrey B. Small, has provided a heart-felt response and a detailed description of the clothes he has loaned us for the shoot, printed below.

When the people behind StyleZeitgeist Magazine asked me for some clothes to do the shoot a few months ago for a tribute to the German artist and his legendary action, I honestly had some mixed feelings. Since about 2006, I normally send nothing to magazines anymore – for a long list of reasons. But when asked if I knew anything about Beuys, and the fact that it was the people behind SZ who were asking (whom I respect very much,) I decided on this occasion, I would take the risks and send clothes for the shoot. As it turned it out, we happened to have just about exactly the right pieces to emulate what Beuys wore during his epic action, and the photos and story were beautifully executed.

Joseph Beuys’ May 1974 art performance “I Like America and America Likes Me” paved the way for a new generation of German avant-garde artists in the 1980’s including Markus Lüpertz, Georg Baselitz, Anselm Kiefer and many others. But Beuys was far more than just another “modern artist.”

A profound artist and humanitarian of Dusseldorf, he often used felt as a protective material (also lard). During WWII, he was shot down over Siberia and rescued by the locals who wrapped his frozen body in lard and felt. His intense experiences surrounding and during the second world war led him to also to become a prolific activist as well.

Beuys founded (or co-founded) the German Student Party (1967), the Organization for Direct Democracy Through Referendum (1971), the Free International University for Creativity and Interdisciplinary Research (1974), and the German Green Party Die Grünen (1980). Beuys became a pacifist (he had previously served as a German Luftwaffe piloting in World War II), was a vocal opponent of nuclear weapons and campaigned strenuously for environmental causes. He was also elected a Green Party candidate for the European Parliament.

A text from the Walker Art Museum further explains…

“Beuys’ actions were often described as intimate, autobiographical, politically charged, and intense. Actions would typically last 45 minutes to nine hours, and though his actions were not rehearsed, Beuys often created a score or “partitur” (as opposed to a script) in which he would plan the objects that would be used and the sequence of the performance. Beuys viewed each action as a new version of a basic theme and an attempt to make his philosophy more comprehensible. He also believed that the less literal the performances were, the easier it would be for the audience members to translate his message into their own lives.

Beuys traveled to the United States in 1974 and performed an action entitled ‘I like America and America Likes Me’ at the René Block Gallery in New York. The action actually began at Kennedy Airport, where friends wrapped him in felt and transported him to the gallery in an ambulance. Beuys then spent several days in a room with only a felt blanket, a flashlight, a cane that looked like a shepherd’s staff, copies of the Wall Street Journal (which were delivered daily), and a live coyote. His choice of employing a coyote was perhaps an acknowledgment of an animal that holds great spiritual significance for Native Americans, or a commentary on a country that through its Western expansion had become ‘lost’ America.”

We were honored to be invited and have some or our work included in a tribute to the German artist Joseph Beuys in the current issue of Stylezeitgeist Magazine Volume 2. The GBS NNP03, GS02N and NLWJ05 handmade trouser, shirt and waistcoat are included in the photo essay shot by Jeff P. Elstone II. Here exclusively for Stylezeitgeist, we provide a closer look at the pieces used in the iconic photo above dedicated to the artist and his legendary 1974 Art Action “I like America and America likes Me”…

The limited edition NLWJ05 special waistcoat vest is one of only 12 individually handmade pieces being made for the entire world this season. It was made exclusively from our original 19th century pattern and cut in an exquisitely fine and ultra-soft pure baby camel’s hair woolen fabric woven in Pollone Biella by the world’s oldest woolen mill still in operation today, Fratelli Piacenza 1733 Spa. The spectacular fabric was combined with special pure cotton antique floral print linings from Como, all individually hand dyed in our studios with a special process that required about 12 hours for each piece. The design also features real handmade olive wood buttons made for us in Padova, Italy, hand made besom pockets, and all hand-stitched buttonholes and extensive hand pick-stitch detailing work in luxurious pure silk Bozzolo Reale Milano Seta threads that required another two and a half hours of expert handwork for a single piece. Each piece is being hand-signed and numbered by the designer this season. 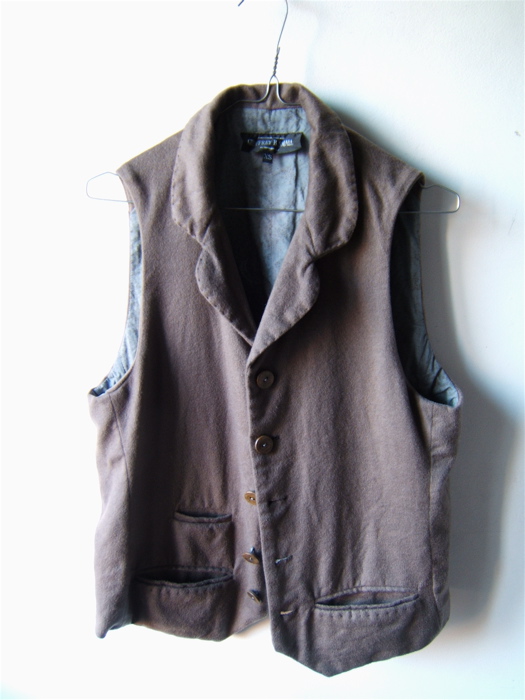 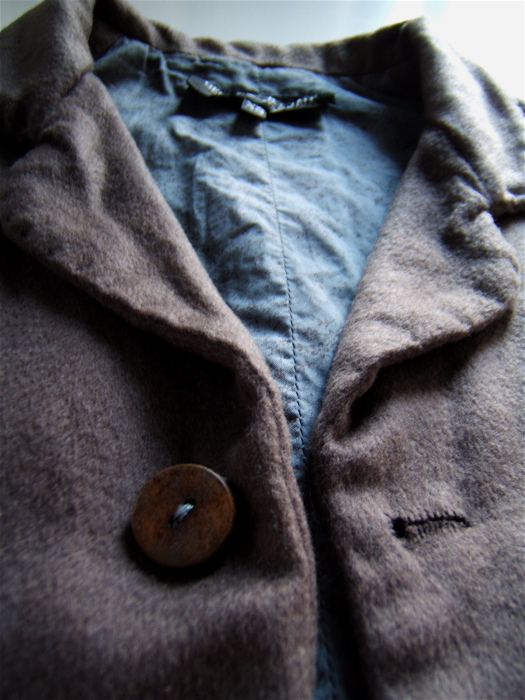 This GS02N handmade shirt design was first introduced in 2009 and has become quite a favorite among our clientele. It features a removable top collar for a true “2-in-1” design concept use for maximum investment value allowing its owner to wear the shirt as a band-collar or classic dress collar design as he or she wishes. The shirt is made using an exceptionally soft and very substantial luxurious super 120’s double-twist pure organic cotton “Venezia” shirting cloth woven for us by L. Parisotto and family in Sarcedo Italy, whom we believe, are by far and away the best cotton and linen fiber weavers of luxury fabrics actively in operation in the world today. The design features a longer proportion fit and cut from our medieval-period collections research, combined with a unique 5-button 17th century reproduction curved sleeve-cuff design, real mother-of-pearl shell buttons made in Padova, and an amazing twenty-two entirely hand-sewn buttonholes with pure silk Bozzolo Reale Seta Milan threads which require about 4 hours of painstaking expert work just to make the buttonholes alone for a single piece. The GS02N has been a commercially success for us, with some 38 pieces having been exclusively commissioned and built since 2009 in various versions of L. Parisotto’s super 120’s double-twist cotton fabric.

Only four examples have been made by hand in the world of the rare NNP03 trouser. Each pair was cut in a very special luxurious heavy medium-coating weight cashmere and wool herringbone cloth woven in Pollone Biella, Italy, by the most respected cashmere-fabric makers in the world, Fratelli Piacenza Spa. Founded in 1733, they are also the world’s oldest continuous running family-operated woolen mill. At almost 90 euros per meter wholesale, the trousers have a primary fabric cost of over 180 euros before we even begun to cut and build them in our workrooms. Upon completion of the first 11-hour hand construction phase, the piece was specially dyed by hand, with a very labor-intensive technique in our studios that requires at least 7 more hours of expert treatment work, followed by buttonhole and button detailing work and suspender construction and assemblies, resulting in a marvelous cold-weather garment that is both soft, warm, and extremely comfortable and durable. Think of the old flannel lined L.L.Bean hunting trousers but executed at an entirely different level of design, performance and aesthetics and you can begin to get an idea of what these rare super-trousers are all about.

With a goal to provide its owner at least several decades of sustainable and ethical use and wear, the piece features generous seam allowances on all major fitting seams which can provide a competent tailor, alteration capability up to 2 sizes up or down as the owner’s body sizing changes over time. The trouser also features hand stitched and taped leg hems, special hand-cut vintage recycle garment leather suspenders made by hand in our studios, special buttons in real leather, made for us in Parma Italy by Claudio and Cinzia Fontana, and real hand sewn buttonholes with pure silk Bozzolo Reale Seta Milan threads (each one requires 8-10 minutes to cut and sew). Each of the pieces were signed and numbered at Cavarzere, Venezia. 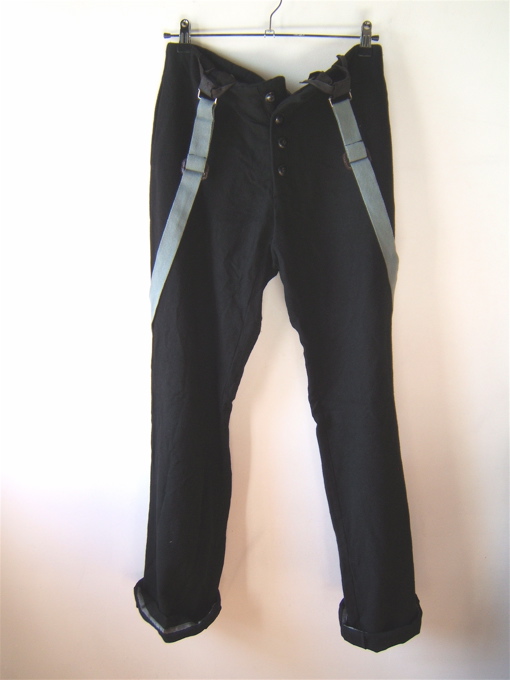 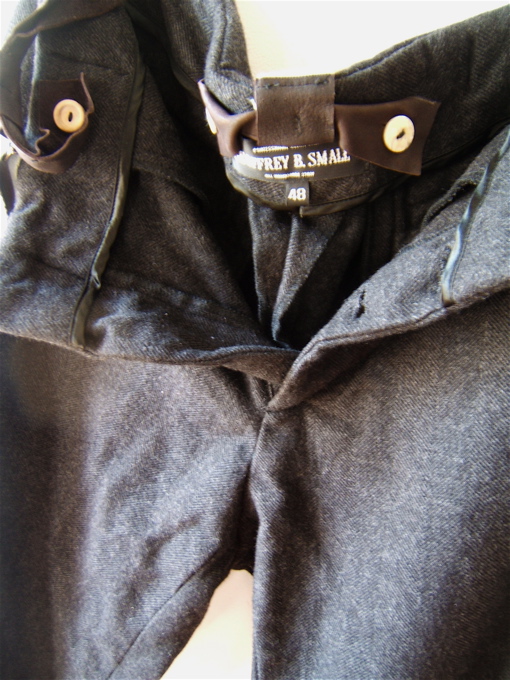 In a world where so much of both Contemporary Art and Fashion have become so dominated by big-money and other… for lack of a better word… bling-related interests, perhaps a good look at Joseph Beuys and his more-timely-than-ever body of works, could be a very refreshing, and positive thing.

Hats off to StyleZeitgeist Magazine, and everyone involved with the shoot, and with many thanks for thinking of us and inviting us to be a part of it.