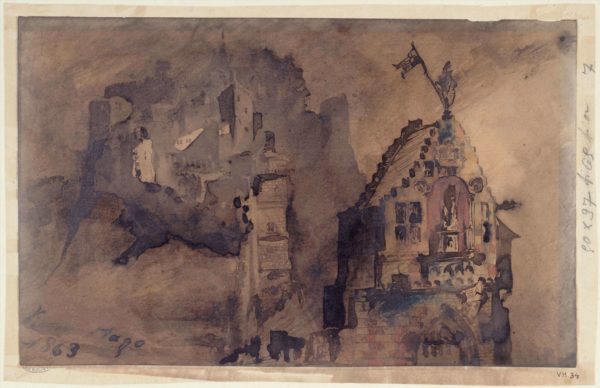 “Romanticism is a grace, celestial or infernal, that bestows us eternal stigmata.”
Charles Baudelaire

In recent years museums have paid quite a bit of attention to the dark side of human emotion, from the brilliant 2006 Czech exhibit “In Morbid Colors,” to the Alexander McQueen exhibit at the Met in New York, where McQueen’s own darkness was cloaked in an aura of romanticism by the curator Andrew Bolton, to this year’s “Death: A Self-Portrait” at the Welcomme Collection in London.

As part of the ongoing exhibition series called “Romantic Impulse,” the Stadel Museum in Frankfurt au Main, Germany recently held an exhibit called “Dark Romanticism: From Goya to Max Ernst,” which finished last month. But don’t worry if you missed it – the exhibit was accompanied by a three hundred-page catalog, published by Hatje-Cantz, that is hitting the shelves on this side of the pond (the exhibit itself will travel to Musee d’Orsay in Paris this spring).

The beautifully laid out tome traces European art from figurative painting of the late 18th Century to the Surrealist movement of the 1920s and 30s, focusing on all things sinister. That the dark can be romantic is a poignant statement, since most view darkness as negative and romanticism as positive and combining the two is fascinating, if not exactly counter-intuitive.

Why would artists spend time and effort on the seemingly vile things? One tempting explanation, especially in our therapeutic age, is that depicting the macabre is a kind of catharsis. Goya, the poster-boy of horror art, witnessed the atrocities of Napoleon’s army in Spain firsthand. Otto Dix saw his comrades gassed and torn to pieces by bombs in the trenches in World War I. And so on.

Freudian explanations aside, perhaps one can simply say that dark romanticism  bears witness to human beings doing unspeakable things. And since we cannot really explain such actions with reason, it falls on romanticism, that is on the exaggerated emotion that makes the real fantastical and the mundane unusual, to pick up the slack.

The two hundred art works combined in the book, from sketches to paintings to sculptures, are eerily gorgeous. That the macabre can be beautiful is another result of romanticism, which the authors of the multiple fine essays in the book define as the sublime, and putting it in opposition to conventional beauty.

One of the major themes of the essays in the book is how fine art paralleled and was influenced by the dark romanticism of contemporary literature. Eugene Delacroix’s paintings and lithographs based on Goethe’s Faust are impressive (Goethe himself expressed his admiration for them, while, ironically, calling Romanticism “sick”). Victor Hugo’s drawings are less remarkable, but they go well together with his own brand of despair so vividly expressed in his writing.

Dark romanticism is also sublimation of ennui, that first of the first world problems. It is no wonder that the two major proponents of such art were Charles Baudelaire and Oscar Wilde, both of whom devoted a significant role to spleen in their writing. That both were noted aesthetes speaks volumes about the beauty of melancholy and is a curious reminder that while we all may be in the gutter, some of us are looking at the stars.