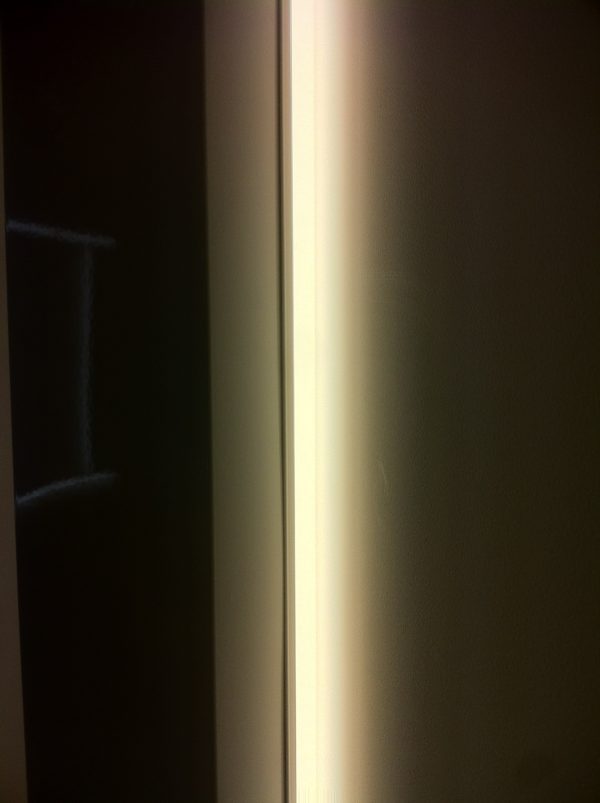 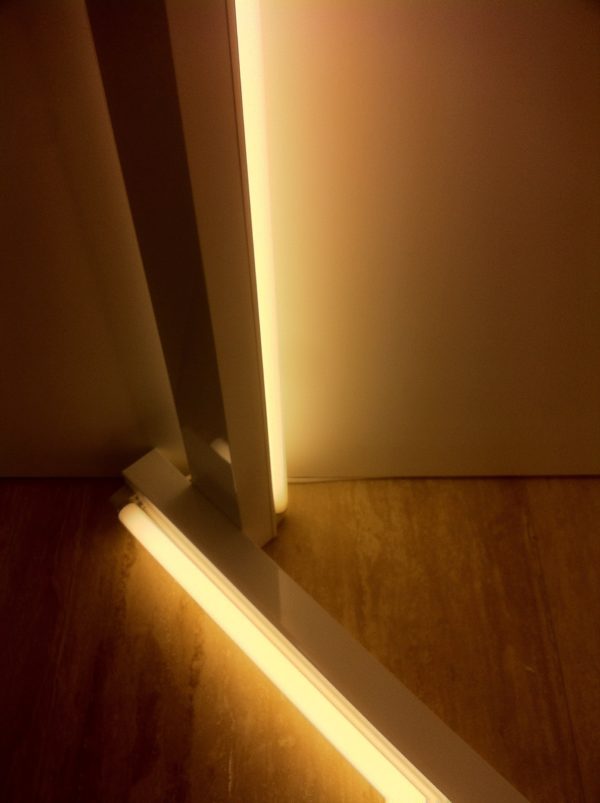 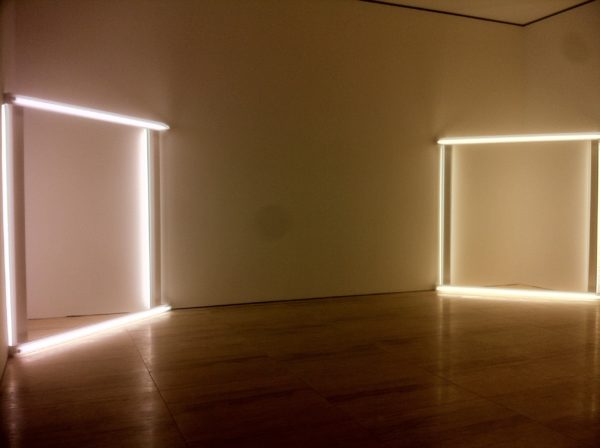 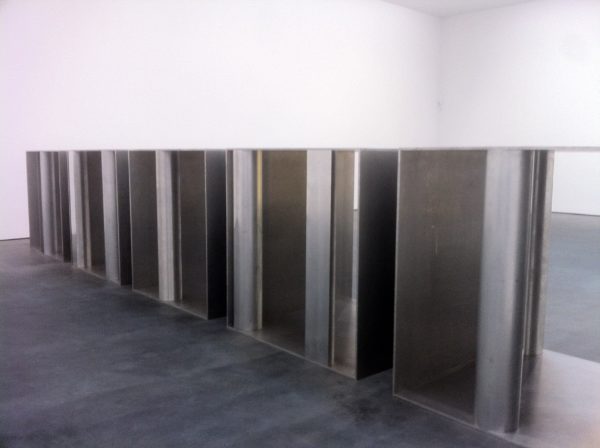 The nine grand Dan Flavin works and one big five-unit Donald Judd aluminum cube installation, now collectively up at the David Zwirner gallery on 20th Street will serve as a slap in the back of the head for anyone who thinks they’ve had enough of minimalist art.

And, as much as I want “to get” the elevating art historical language that dust-devils around these works, and American minimalism in general, the best response I have come across to date and the one most appropriate to describe this show, is Kirk Varnedoe’s clear-eyed description from his 2003 A.W. Mellon Lectures delivered at the National Gallery.  In the process of debunking the theory that the CIA actively promoted American abstract expressionism to highlight “the freedom of the individual” against Communism, Varnedoe described minimalism as follows –

“But if abstract expressionism promoted a fake Americanism, the left sees a true Americanism embedded in minimalism, with its repetitious structures, its hard-edged geometry, its dependence on large scale, its regularity, and its cold efficiency.  From this perspective, minimalism is seen as a technocratic or corporate kind of art, an art covertly about the side of American life that is all about power and production.

… As for the reading of minimalism as a coded representation of power, it seems to me that minimalism is just plain odder than that.  Judd’s metal works were not mass-produced but fabricated at a kind of mom-and-pop metal shop, Bernstein Brothers in Long Island City, using galvanized iron, stainless steel, aluminum, brass, colored Plexiglas, and the kind of translucent enamel paints used to customize Harley-Davidsons.  The results are not overpowering or impersonal; in fact they are often kind of fussy, slick, and decorative.  There is something small-time and peculiar about the fabrication of a lot of minimalist works that suggests not industrial mass production, but old -fashioned craftsmanship.  In this sense, minimalism seems to express a nostalgia for small-product America, for chopper shops and body shops or businesses that make metal door frames or install aluminum siding.”

The nine works by Flavin are each comprised of four eight-foot fluorescent tubes set in a white metal housing.  The four bulbs together form a cube.  The horizontal tubes face the viewer.  The uprights face away from the viewer.  Also, the upright tubes are set behind the horizontals; if you were making this out of Lego’s, you would snap the horizontal tubes onto the vertical ones.  The whole thing – eight-feet by eight-feet of it – is then ever so gingerly settled into a corner of the gallery space.  Nine works, nine gallery corners, nine different colors of commercially available fluorescent lighting.  If you get right up to them, you can see that that the vertical bulbs facing into the corner nearly imperceptibly touch the walls.  You cold maybe slide a sheet paper between bulb and wall.  And since these things have to be plugged in, you then note that the electrical cord ever so discreetly scoots out a couple inches from the sculpture and then runs in a perfectly fitted slot between the drywall and the gallery floor and disappears presumably to some electrical source somewhere in the gallery wall.  The look is seamless (“power and production” in baths of fluorescent color), but I figure it was a pain in the ass for somebody to install (mom-and-pop fussy).

The Judd sculpture from 1991 is comprised of five aluminum milled cubes each about as tall as a person and open on two sides.  They are lined up in a row, the open sides facing the viewer.  As one walks around their massive forms, one can see over and through the cubes but if one were to stop at the end of the row, one would look across and see a line of five aluminum square tops each separated by about a foot, a uniform view but for the random markings from their milling.

The sculpture is maddening because the brain, confronted with seriality and the semblance of pattern, invariably tries to read it, to make sense of it.  There must be some logic, you figure, to the variations in placement of the columns and whether the flat side of the column faces outward, or the hollowed curve, or what side it shows up on, and how the configuration shifted from one box to the next in the series, but a logic I did not discern.

In this sense, the gallery is correct that the Judd “cannot be comprehended in its entirety from a singular point-of-view.” Perhaps it’s best to see for yourself.

Dan Flavin and Donald Judd. At David Zwirner in New York, through March 16, 2013.

All images are courtesy of David Zwirner Gallery