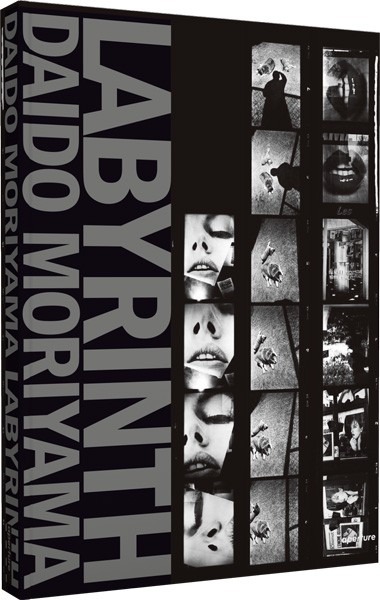 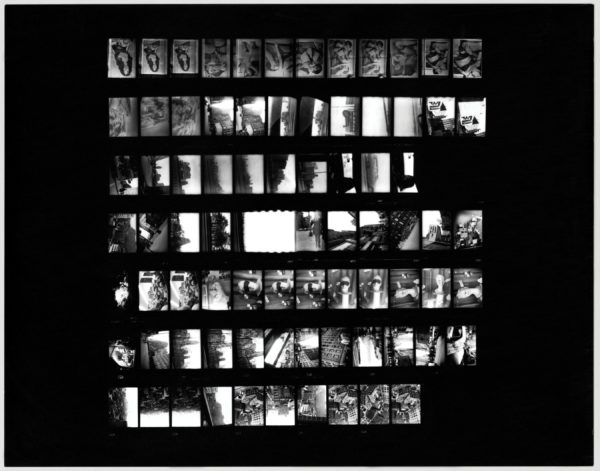 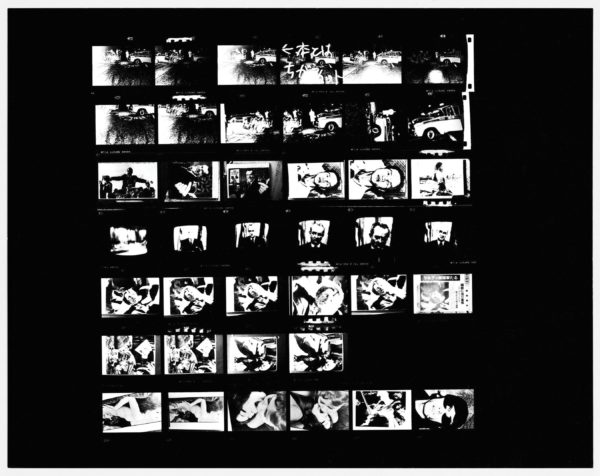 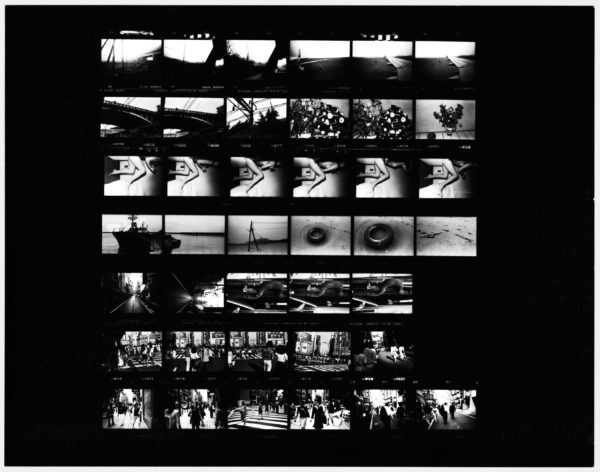 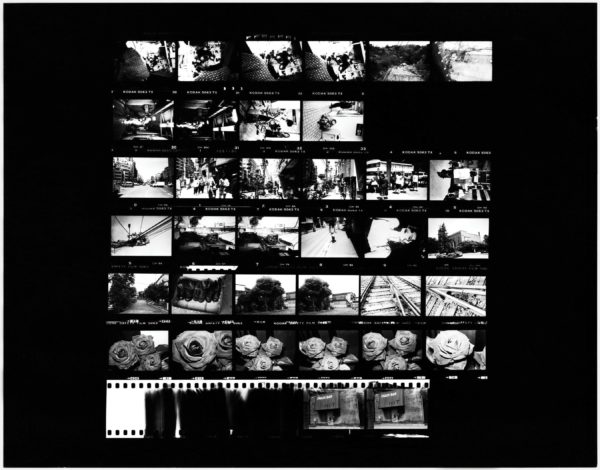 Japanese photographer Daido Moriyama is so prolific that his official website can hardly keep up: the ninety-one-book list is already out of date and omits a lot of past titles too. If we wanted to, we could bury you with book reviews for this septuagenarian artist. In this blur one particular title, Labyrinth, co-published by Akio Nagasawa Publishing and Aperture, stands out due to its genesis, production value, and content. It is a large format, well-appointed book, printed in Japan that comprises 300 pages of contact sheets that were personally selected by Moriyama from his archive from the 1960sto the present. Roughly eyeballed, it contains around 4500 images. It reeks of black ink. Oh, and you will need a magnifying glass.

While doing research for this review I came across an interview in The Guardian that a friend sent me that pinpoints why this book is more magical than Moriyama’s typical output. Moriyama relates that, “One day I was drinking coffee with my girlfriend when I caught a glimpse of her legs, which happened to be in stockings with fishnet tights over the top. I immediately started taking photographs. Most of my work, whether shot in Japan or abroad, is made on the street. I like to photograph the cities I visit and the people I encounter there. One of my best-known images, a shot of a stray dog taken in 1971, is an example of the kind of thing that catches my eye. But sometimes I want to shoot more erotically charged scenes, such as a woman in tights… The shoot was quite natural: I asked my girlfriend to make an occasional pose, but didn’t particularly direct her. I tend not to have feelings or thoughts while I work: I am completely immersed in the visual world of the subject. I took two rolls of film in under an hour, then spent three hours printing the photographs. From those, I came up with an eight-page layout for a photography magazine, arbitrarily placing the images in vertical and horizontal positions.”

The contact sheets from those two rolls – sixty-one images by my count – comprise a full spread in Labyrinth. The reader can concretely follow Moriyama in the taking of the photos, watching as he closes in (I don’t think Moriyama uses a zoom), turns the camera this way, then that, as his girlfriend crosses and re-crosses her legs and, if diligent, you could even take the next step of determining which images Moriyama ultimately selected for “final” publication and which he didn’t and, perhaps, through that back-and-forth get an insight into how he deploys his eyes, body and emotions.

An unexpected benefit of this book is also that is somewhat comprehensive. Standing on its own, Labyrinth presents known (and unknown) images from his classic photobooks and in that regard if you can only have one, you could do a lot worse than Labyrinth.

Ivan Vartanian, responsible for the US edition (as well as Moriyama’s well received “Printing” shows/performances in New York and London), generously took the time to correspond about the making of the book. Special thanks to him for his behind-the-scenes views, provided below:

“The idea to do Labyrinth happened while we were in New York for Printing Show. When he checked in to our hotel in Chelsea, Daido was mesmerized by a poster-sized print that was in the hotel lobby. It was a contact sheet from a photo-shoot with President Obama. I don’t remember the photographer’s name but the shoot was from the mid-90s and Obama was much younger in the photos. It was dynamic and Obama’s charm and ease in front of the camera was pretty clear in the sequence of frames. When Daido saw the print, he was mesmerized and said he wanted to do the same with his negative. Akio (of Akio Nagasawa Publishing) was standing there too and said, ‘Let’s do it.’ That was the origin of the book project itself. It was a mad dash to get the book ready in time for the Klein/Moriyama show at the Tate Modern.

The key point is that photography in most photobooks is a reproduction. Somewhere there exists an original and the duty of the publisher is to faithfully (capital-r) Reproduce those originals, matching them as closely as possible. In other words, the reproduction can only ever aspire to match the original print made by the photographer. As I have written in my book Japanese Photobooks of the 1960s & 70s, the plate in the book is in itself an original. So when you start out with that mindset, you are a lot freer to make use of the printing press as a photographic enlarger. Whether we are using a photocopy machine, offset printing, or silk-screening (which I have also used to “reproduce” Daido’s work), the process is the same: making use of the printing technique not as a tool but as an expression in itself. I have written and spoken about this topic a fair bit but that is the general gist of why the current flowing through Japanese photobooks in general is different in tenor from their Western counterparts. Then, of course, there are the cultural and historical differences in photography and the position of the photobook in Japan is quite different (up until recently) from how the photobook functions in the hands of Western publishers.

Even with Aperture and the preparation of this volume, there was a bit of resistance to the strict adherence to contact-sheet only layouts. They wanted to include blow-ups and full-page bleeds but Daido wasn’t interested in doing any of that. The outcome, I feel, speaks for itself. The book is quite close to Daido’s heart and unlike a lot of books that come out under his name this publication is really his edit. He composed each page of the book. You cannot get closer to the real deal than that.

Daido is a machine. But he also works in an intuitive way and when he pauses to think about something, the pause is fairly short. He’s decisive and knows how to rely on his gut to make decisions. So, from the outside, the process can seem quite automatic. But when he is editing and working, his mind is razor sharp and quick. Even still, when he told me he had done all the contact sheets just a few weeks after sitting down to the project, I was floored. I think he was surprised I was so surprised.

Even though Daido doesn’t speak any English, he has a deft feel for certain words. And his ability to title things is amazing. I think we spent several weeks mulling over the titles for Labyrinth. I gave him a whole list of options to choose from but in the end he chose something entirely different. The same was true for TKY [the book produced during the Printing Show at the Aperture Foundation] and other projects too. When I think back on it now, it feels like there was no way there could have been any other title but Labyrinth.”

The title is apt in the most literal sense. The book is a labyrinth: while paging through it for the photographs of the fishnet tights my mind and eye began to wander among the countless images to the point where I momentarily lost sight of what it was I was looking for in the first place.

At the end of that interview in The Guardian, Moriyama was asked to offer a tip to other photographers. His answer: “Take as many photographs you can: it’s the only way to train your eyes, body and emotions.” Practice what you preach.