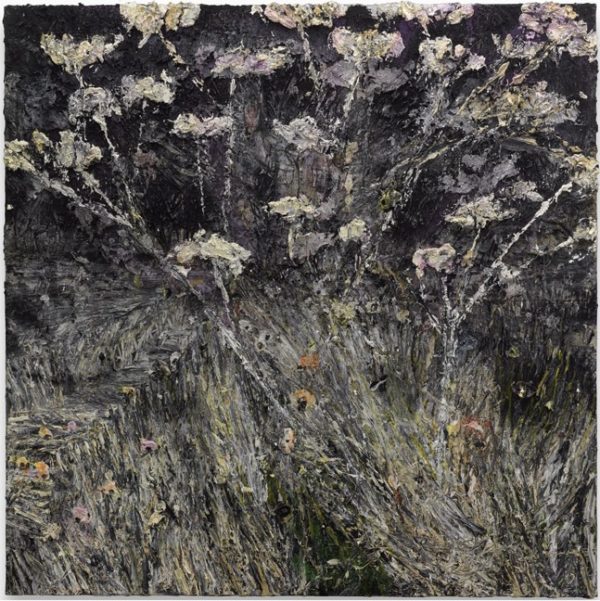 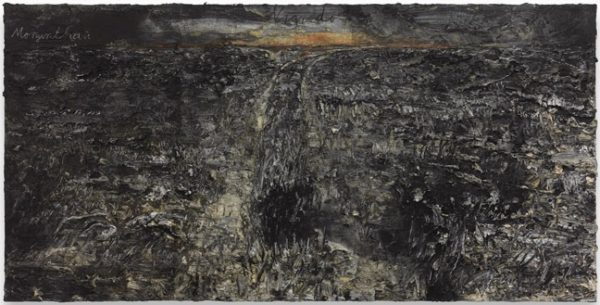 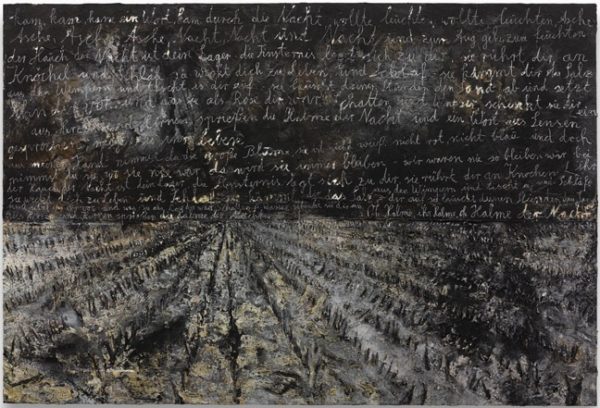 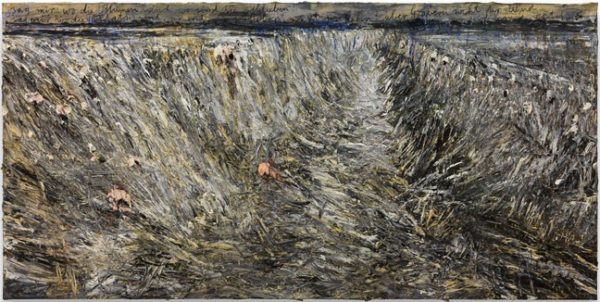 That a prominent artist today can still take up a historically serious subject has become a sort of an anomaly, as much of contemporary art seems to be stuck in the irony mode. The new exhibit by the German artist Anselm Kiefer called Morgenthau Plan, on view at the Gagosian gallery, is a cause to take a West Chelsea trip and, for once, not be disappointed.

Kiefer came of age in the devastated post-war Germany (he was born two months before the Nazis capitulated), a time when the specter of devastation and the widespread realization of what the Third Reich has wrought became an all-pervasive national tragedy. Much of Kiefer’s oeuvre reflects an almost therapeutic need to come to terms with the crimes of the previous generation of his countrymen. That he continues to do so in 2013 is a powerful statement.

For anyone deeply impressed by the war, the inevitable question of “what if” arises. In his 2004 novel, The Plot Against America, Philip Roth, a Jewish American child during WWII, imagined what America would be like if the Nazis won. But they did not, and the big question of the day for the Allies was about how to deal with Germany, the biggest, highly industrialized country in Europe that had started two devastating wars in the span of 25 years.

The American-authored Morgenthau plan called for the dismantling of the German industrial complex and turning Germany into a largely rural country incapable of engaging in modern warfare. It was partly implemented, vastly reducing German production of steel until in 1947 the Cold War became a bigger threat and America and Great Britain realized that a strong capitalist Germany is a better bet.

But what if they didn’t? Kiefer paints a bleak picture, literally. The show consists of fourteen paintings and three sculptures depicting what Germany would look like brought to its knees.

First, it is worth noting how vast Kiefer’s canvases are. The biggest work, “Von der Maas bis an die Memel, von der Etsch bis an den Belt,” comprised of four canvases, is a whopping 14.7 x 20.7 feet. The choice of scale is not arbitrary as it really pulls the viewer in. You cannot help but stare. The incredible depth of textures provides additional sense of gravity. The daubs of paint, secreted by shellac, are three-dimensional and the cracks in them provide an eerie resemblance to scarred wood bark.

Most of the paintings’ “colors” range from dirty white to pitch black via the full spectrum of grays. The paintings are fairly abstract up close, and you have to step away to see that what you are looking at is countryside, with fields and flowers. But there is nothing bucolic or pastoral about it. What you are looking at, unequivocally, is devastation.

The paintings are so technically complex that it is almost besides the point that they are actually painted over photographs. And within the vastness of Kiefer’s canvases there is plenty to be found. If you look closely at “Große Eisenfaust Deutschland, kleine Panzerfaust Deutschland (Velimir Chlebnikow)” you will see children’s faces (As Hitler was running out of troops and weapons in1945 he conscripted fifteen year olds and armed them with Panzerfausts (a rudimentary anti-tank rocket launcher) in a desperate attempt to frustrate the advance of the Red Army). In the painting that bears the same name as the exhibit a faintly outlined shadow of what looks like a defaced Hitler in his famous Nazi salute pose looks like he is trying to thwart the plan itself. If you look closely you will see a faintly marked path over which his upraised hand hovers not as a greeting but as a halting gesture.

The three sculptures that round off the exhibit are also familiar Kiefer territory, fusing the inorganic and the organic. These, too, are poignant but easy to digest and therefore less interesting. The one sculpture where a snake slithers through wilting wheat stems is too obvious in its symbolism. If one of the attractions of looking at art is search for hidden meaning, this one certainly does not help. Also superfluous are the writings on some of the paintings, not only in making the meaning more obvious, but also in detracting the viewer from taking in the formal aspects of the works. And those are masterly and worth your attention.