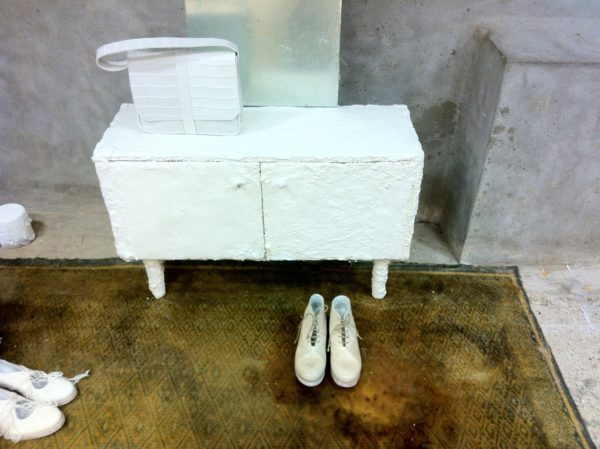 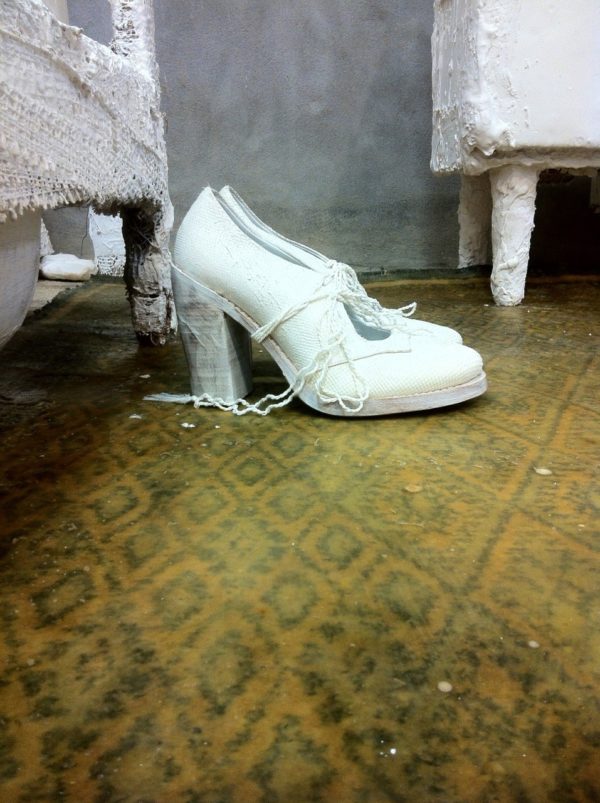 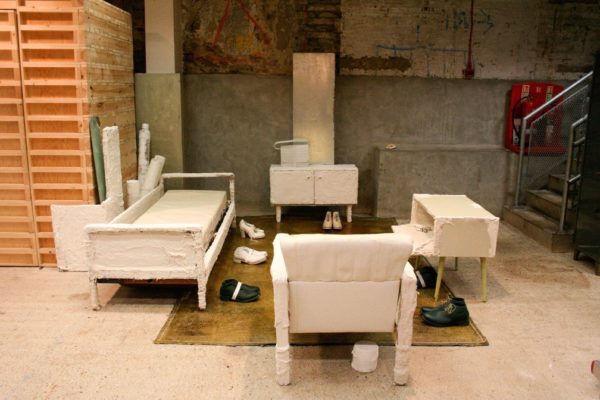 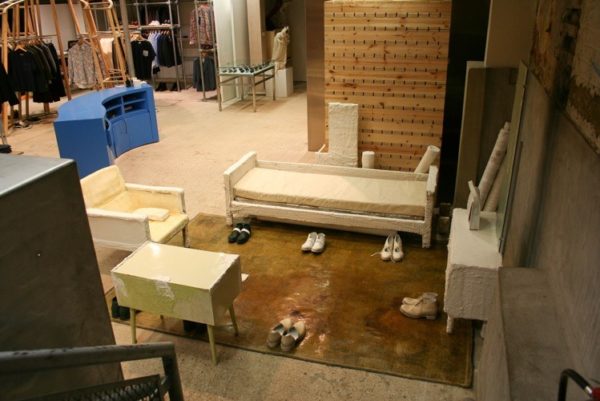 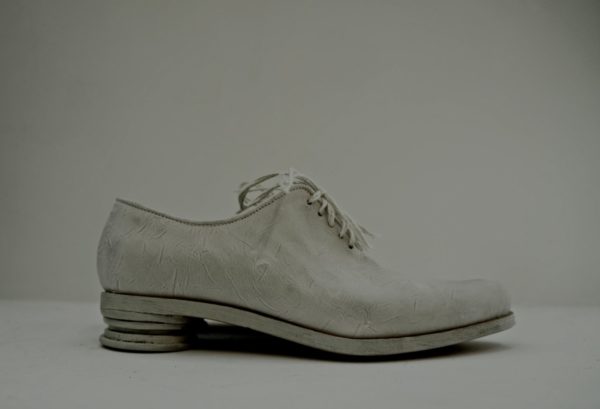 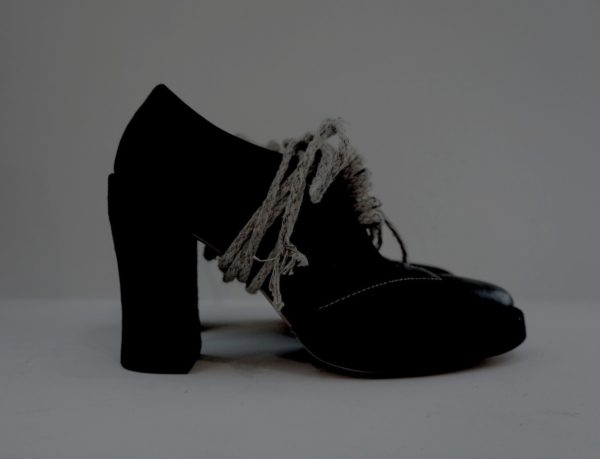 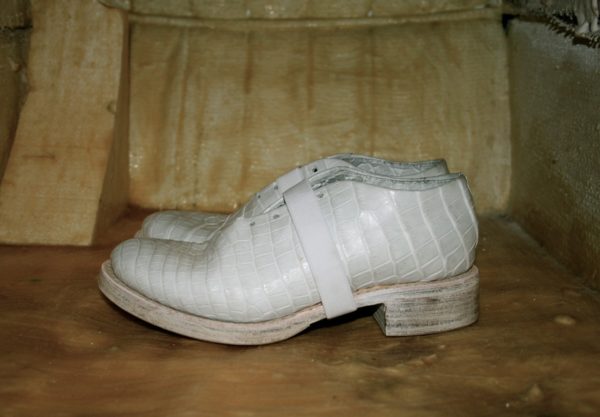 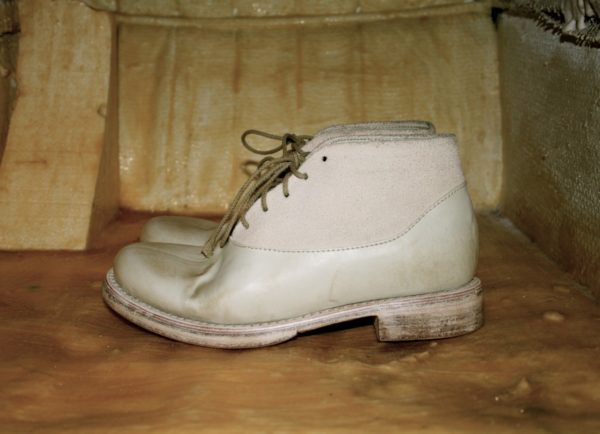 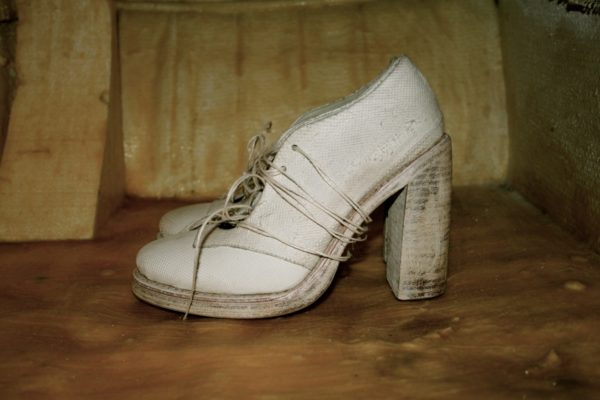 A 1970s cabinet from the German Democratic Republic with a frameless mirror on top, a low and narrow single bed, an Uzbek patterned carpet: the furnishings that fill the newly-assembled living-room in the basement of Dover Street Market are unmistakably Soviet. As someone born and raised in the USSR I immediately recognize the utilitarian shapes, yet the textures are unfamiliar: every piece is coated in a heavy mix of plaster, latex, liquid rubber and hessian that makes the objects look like ghosts of themselves. The mirror does not reflect anything, the carpet’s pattern is barely intelligible, the once-glossy wooden surface of the chest is rendered white and matt; the overall dreamlike feeling is that of stepping into the living-room of my childhood decades later, and finding everything in its old place but buried under the weight of time passed.  This is the newly opened installation by Cherevichkiotvichki, the London-based shoe label that takes inspiration in abandoned spaces, time and memory.

Victoria Andrejeva, the one-woman show behind the brand, born in Lithuania to a Jewish family with a distinctly Russian surname, insists on referring to her national identity as Soviet. Romantic nostalgia that shines through all of her collections is always paired with utilitarian minimalism and an obsession with craftsmanship. During production time Andrejeva spends weeks in the Italian factories where her shoes are hand-made. “I am involved in every step of the process; I cannot just give my drawings away and say, “Now make something out of it.” Despite being entirely self-taught she is familiar with the technical intricacies of shoemaking – she knows, for instance, how to make lasts, something that even labels with years of experience often outsource to specialists. Still, she regrets not yet being able to do everything, from leather treatment to finishing, by herself. She hopes to achieve this in the near future. But then, I muse, she will probably have no time to eat (she is already handling all design, sales, marketing, logistics and everything else herself). “I would get local people to work with me,” she replies. “I’ve always dreamt of a community-led workshop, kibbutz-style.”

Apart from creating the actual shoes Andrejeva collaborates with various artists on art pieces that accompany each collection. Unlike most fashion designers who focus on different topics each season, Andrejeva tends to develop every theme for a year, thus giving herself and the artist she works with enough time and the scope of two collections to explore the subject. This year’s theme is Abandoned Spaces. Victoria has teamed up with London-based Studio Toogood (renowned for their collaborations with Comme des Garcons and Alexander McQueen) to create the dreamy, slightly spooky time-inspired installation I saw in Dover Street Market. Last year her chosen art form was film: collections came with 3-minute shorts, written by herself, directed by award-winning Babak Jalali. The FW12-13 film features a little girl in a scarcely furnished Soviet flat in a snowbound brutalist estate block, entertaining herself by tying a rope over the neck of a rather shabby-looking teddy bear; she then takes him out for a walk, dragging him after her on a rope. One cannot shake off the feeling that behind the nostalgia, enhanced by low-fi footage style and ethereal music, lies something darker and creepier.

“They are all snippets from my own childhood,” confirms Andrejeva.  “Creepy? Well, I guess I was a lonely child – not an unhappy one, but there is a certain poignancy in my childhood memories.” It wasn’t a fancy childhood either: all Andrejeva’s relatives were factory workers. “It was ascetic, fluff-free. No Barbies, no Coca-Cola, no videos, none of the joys of globalization and consumerism.” The teddy bear episode is, in fact, a recollection of real life experience: as a little girl Victoria really wanted a puppy but her parents could not get her one; she then took to ‘walking’ her teddy around their yard instead. “People did think I was a bit weird,” she laughs.

Despite numerous references from the past, the actual collections are nothing if not modern. Although they are inspired by Soviet shoes that were made to last, someone not coming from a Soviet background would not necessarily pick up on it. They are clean and strikingly contemporary. Unlike actual Soviet shoes (that, like any ‘socialist’ object, favored functionality over beauty), they are not only comfortable and visibly durable but also flattering: stripped of tongues and laces they offer a view of the instep and thus visually elongate the leg, creating a lean, slight silhouette.  The blindingly white leather that Andrejeva is fond of turns out to be untreated bleached crocodile skin: “This is what it looks like before it gets colored or washed.” The heels and soles are hand-painted. What will happen to the paint with wear? “Nothing,” Victoria shrugs. “I mean, you will probably get stains and soil over it. But it won’t crack, it won’t come off, it will stay exactly as it is.” As much as she’s obsessed with time, Andrejeva is not particularly interested in ageing. “I never distress my shoes,” Victoria explains. “This is what the whole Abandoned Spaces idea is about: I want things to look as if they had been discovered, after years of abandonment, unused.”

I suppose this is precisely what gives me the creeps about Cherevichkiotvichki’s installation and collection. As anyone raised in the USSR I share the collective subconscious to which any abandoned space screams ‘post-disaster Chernobyl.’ I share my observation with Victoria: she certainly wasn’t thinking of death when working on the collection and the installation. “All my shoes are about my childhood: lonely, happy, preserved. When we were creating the installation my message to Studio Toogood was: it’s frozen, it’s left there, unspoilt.” The colors of the collection are green, yellow, beige and white, increasing the “frozen”, “preserved” feeling. I cannot help thinking, again, that this is what an unworn pair of shoes found on the spot of a nuclear catastrophe would look like. And I cannot help loving it: for me, just like for Dover Street Market, LN-CC, and other retailers that stock Cherevichkiotvichki, a bit of spookiness holds a certain allure.