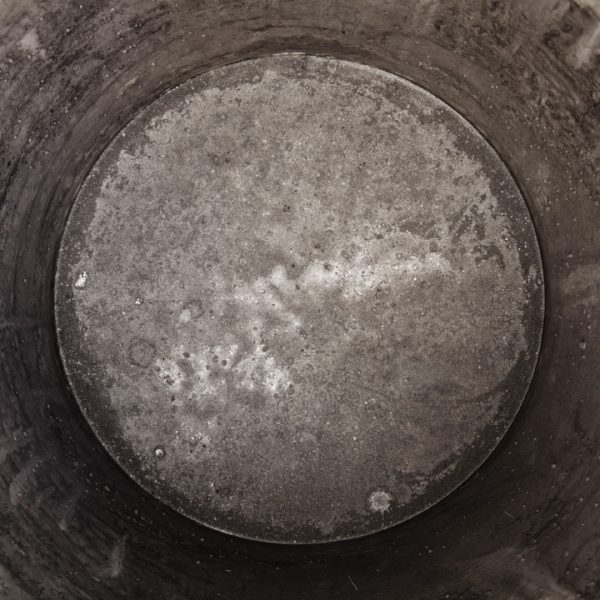 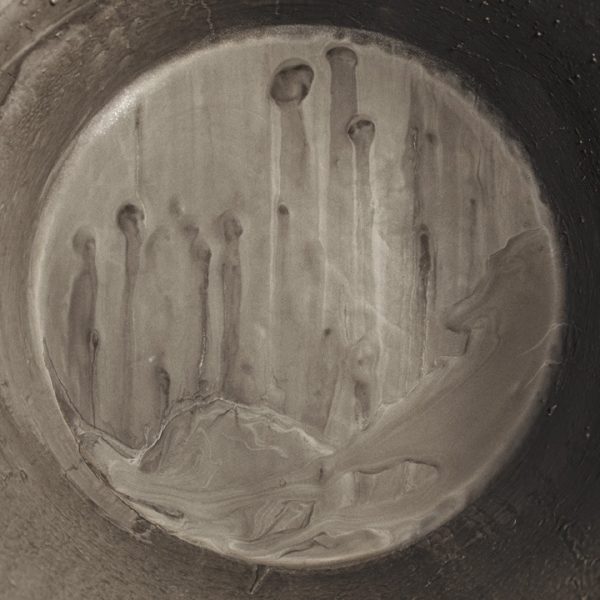 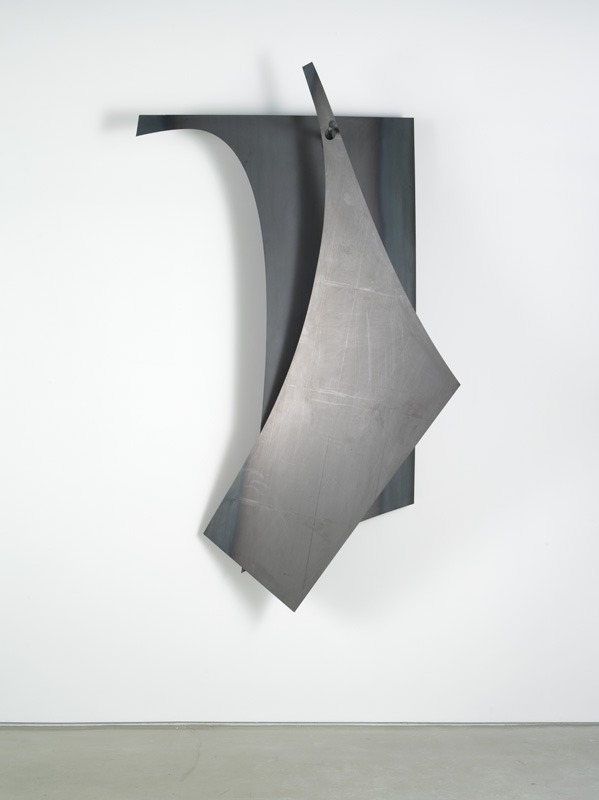 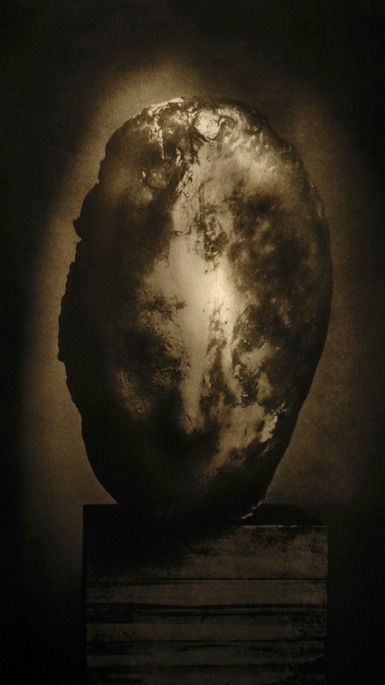 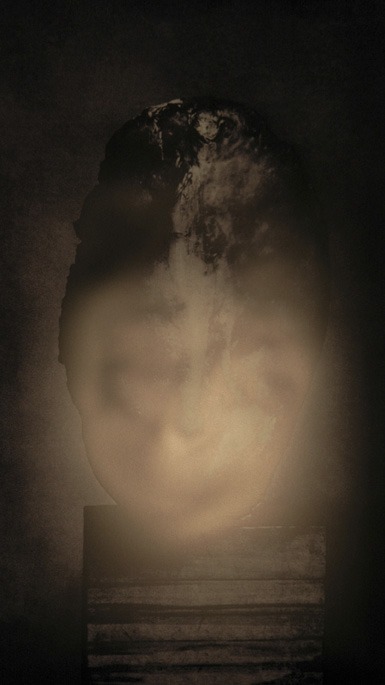 Day is Long, Erin Shirreff’s second solo show of photographs, sculptures and videos at Lisa Cooley is invigorating in that it does so well what good writing is supposed to do, namely, show not tell.  The works in this show and, really, all her shows, for Shirreff’s voice is and has been consistent and steady, unfurl at a stately pace in your mind to slowly reveal that what you see is not necessarily what you see: videos are not quite videos; photographs do not quite depict what you at first thought; and sculptures do (or do not) possess the physicality the eye and mind initially attributed them.  First, you ask yourself what am I looking at, and when the answer comes, the “what” has bent.  As noted by Jan Allen in one of the essays included in the just released and recommended first book on Shirreff, in the end you are looking at looking.

For instance, photograph No. 4, a square archival print about 20-inches square greets you in the narrow gallery entry and you will pass right by it – as I admit I did – peripherally registering it as a shot of the moon’s face, a reference to photography’s beginnings perhaps.  But, stop and look and slow down. On examination it becomes obvious that the image is not of the moon’s face.  The look and the feel of what you’ve trained yourself to recognize as the moon are there, but that’s all.  So what is it, this moon-like image in No. 4?  A photograph of a… photograph?  Of a painting?  Of something flat, or not?  I accidentally overheard the answer from one of the gallery staff at the show’s opening as she explained the photographs from this series are taken by pointing the camera lens down into the buckets and pails dotting Shirreff’s studio.  Whether these residues were detritus that happened to catch her eye or were deliberately made to be photographed, I am not sure.  What is certain is the slipperiness between the original object, the artistic presentation and the way it meets your eye and then intellect.

“Faltering expectations,” is a nifty phrase that Allen applied to Shirreff’s tactics in the catalog’s essay.  “We become of aware of perception in the face of faltering expectations, whether in the unexpected open edges of Shirreff’s cast sculptures or in the hallucinatory skittering of the ‘sun’ across the landscape in Roden Crater [an earlier video piece].”

For an artist so intently focused on looking-at-looking, she is also an accomplished maker of things. “To create Roden Crater,” Allen explained, “Shirreff took hundreds of analog photos of a single internet-sourced image, with hand held lights, different shutter adjustments and with flash: the resulting photos were then choreographed into a high-definition video animation.”  (The video initially reads like a time lapse of the sun rising and setting over Roden Crater, initially that is, until the faltering expectations loom up).

This working methodology is pretty typical of her video work: each video is stitched together in stop-motion fashion from numerous analog photos of the same source image, the only thing that moves is the light and they are silent.

A darkened gallery room in the back of Lisa Cooley is given over to the 2013 video piece Medardo Rosso, Madame X, 1896.  The way the piece was installed calls into question whether it even is a video.  On one wall of the gallery hangs what appears to be a canvas about seven feet tall, four feet across that sticks out about six-inches from the wall. The entire surface of this canvas looks to be covered by the photographic image of a sculpture, Madame X, taken by its maker, Medardo Rosso (during whose productive working days it was debated whether he or Auguste Rodin was the greatest living sculptor).  A projector hangs from the ceiling towards the back of the gallery.

Over time, light effects play out over the image.  Sometimes it glows as if lit from within.  Then it seems as if a spotlight were focused on one part or another of the image.  Other times the light grow so strong as to bleach her out almost completely.  At one point, the light takes on a reddish hue such that it turns Madame X into a molten lump.  Then, many tiny spotlights flicker over the surface like fireflies and it then fades such that the image is barely perceptible.  Repeat.  It was unclear to me the entire time whether what I was seeing was the image of Madame X printed on a canvas hung on the wall on which a program of lights was shined, dimmed and flickered from the projector or whether it was a blank white screen in the shape of a canvas on which a video was projected.  Whatever it is, it is wholly engrossing, and even if the mystery is taken out by knowing how it was made, the magic got left in.

Shirreff also currently has a show of video and film work on at the Contemporary Art Galllery, Vancouver, British Columbia (part of a tripartite Canada show) in connection with which she commented, “This will be the first time I’ve shown exclusively video, so I’m curious how will they function in a space together.  I’ve thought a lot about the pacing in each video.  They are all relatively slow, but the slowness varies – as do, like you say, their light and color qualities.  I want to create a tone in the gallery that will allow the inconsistencies to be noticed.  The process of animation in the videos is meant to draw the viewer into an experiential space, so I’ve really thought about their physical presentation: the scale of the image, how evident the equipment will be, the ambient experience in the gallery.  I’m always amazed at how we gravitate toward screens, how easily we surrender to moving images.  I love that suspension, but I also love what happens when it’s broken.”

While it might seem that any image would serve Shirreff’s purposes, I like to think her choice of subject matter for each video is finely considered.  Alessio delli Castelli in reviewing a retrospective of Rosso’s photographs of his own scultpures taken in the early 1900s wrote that, “Rosso interrupted and interfered with the photographic development process, blowing up details of the images beyond the size the negative would allow, so as to avoid that crispness he despised so much. Similarly, he boiled his bronze sculptures in water, inducing cracks and holes to form naturally, so that the finished pieces would not look perfectly polished like ‘sucked candy’, as Rosso described the work of academic sculptors, and he kept the points of fusion and the irregularities of the cast visible, in an attempt to reach the limit of what holds matter together, stopping just before the work’s solidity would be compromised irreparably. Rosso retouched his photographs to bestow them with a lack of definition, then he re-photographed them and re-printed them so that the newly captured material rested in that inexistent space between the surface of the paper and the image. The process of making images of images relates to the notion of imprints, of residues and of changing matter into light, which is the source of both its existence and of the possibility of its perception.”  A compelling dialogue between two reluctant sculptors separated by a century is quietly taking place in that darkened room in the back of the Lisa Cooley gallery.

In between the photograph, No. 4, that opens Long As Day and the back-room that closes with Medardro Rosso, Madame X, 1896, is the main Lisa Cooley gallery space containing another video piece, Strip, and several large scale sculptural installations, the Drops and the Catalogues.  And, as you can probably guess by now, you can’t quite pin those down either until have you done some looking at your own looking.