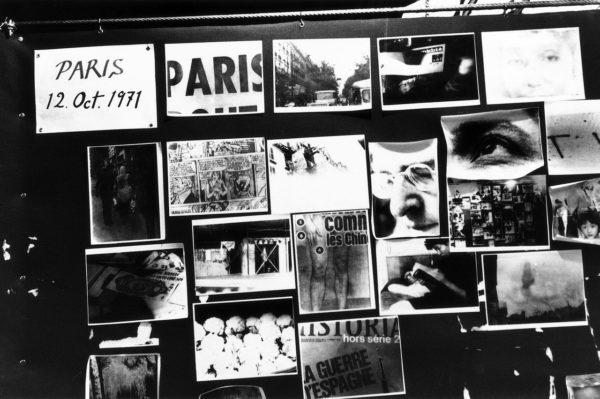 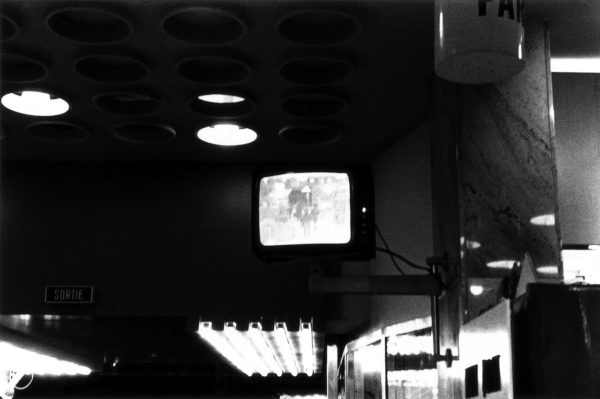 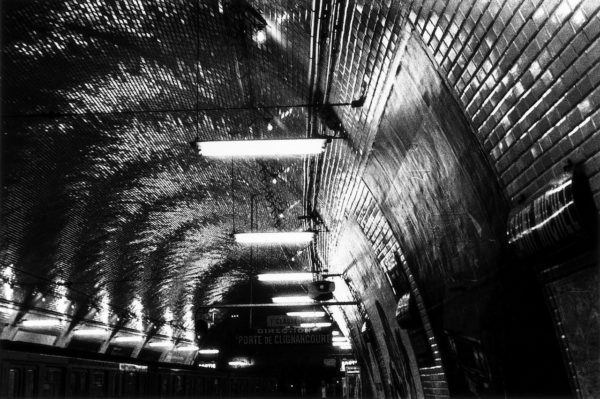 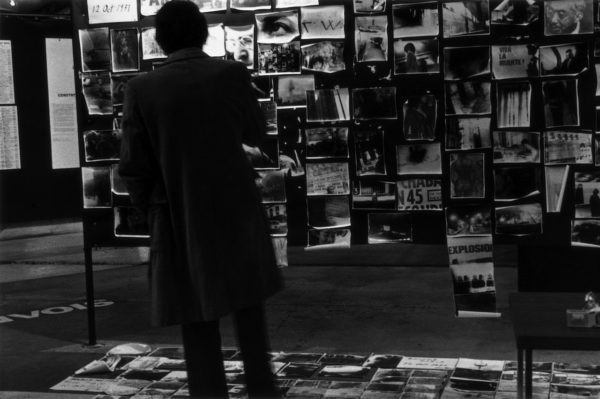 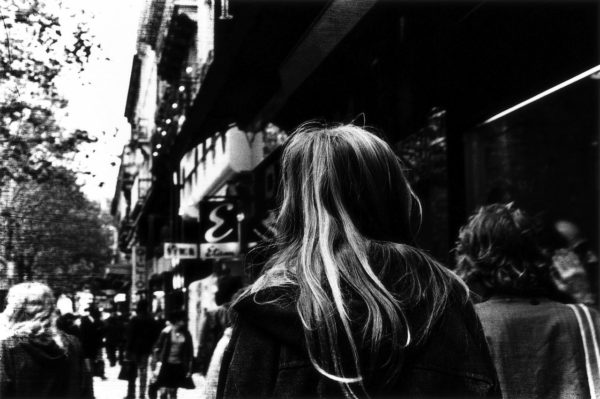 The 80 or so medium-sized, B&W photographs up at Yossi Milo Gallery by Provoke founder Takuma Nakahira in his first solo US show may initially read as street photography but what “Circulation: Date, Place, Events” really amounts to is an exercise in intellectual honesty, and a brutal one at that.

The prints on view were selected from negatives created by Nakahira during the Seventh Paris Biennale held in the autumn of 1971.  When Nakahira was invited to participate he was in an intellectual rut after the publication of his classic photo book “For a Language to Come” (a rut documented with Daido Moriyama in his 1972 classic, “Farewell Photography”).  As he describes it in “Photography, a Single Day’s Actuality,” one of his essays reprinted in the book “Circulation: Date, Place, Events”

“I felt hesitant with the idea of bringing photographs taken in Japan all the way to Paris as finished works of art.  For me it seemed meaningless to try and force photography into the reductive framework of an ‘individual’ work of art, as if to plaster it with my flimsy assertions and ‘concepts.’  I rejected the expression of my own ‘concepts’ and ideas in the form of a work of art…  Thus, to put it concretely, I set myself to photograph, develop, and exhibit nothing but the Paris that I was living and experiencing.  My project “Circulation: Date, Place, Events” was born from this motivation.  Every day I would go out into the streets of Paris from my hotel.  I would watch television, read newspapers and magazines, watch the people passing by, look at other artists’ works at the Biennale venue, and watch the people there looking at these works.  I would capture all of these things on film, develop them the same day, make enlargements, and put them up for display that evening, often with the photographic prints still wet from the washing process…”

Ultimately, Nakahira produced around 1500 photographs at the clip of 200 a day.  His laundry list is quite accurate as to the images captured: it is the lived and experienced Paris of sidewalk views from the hotel window, subway tiles, coffee cups, torn posters and rain puddles.  Some of the photographs are of his booth at the Paris Biennale and you can see how casually and roughly he treated the prints, pinned to the walls, edges curling, and lined them up on the floor when he ran out of wall space.

The temptation for us as contemporary viewers is to see in Nakahira’s project a premonition of the Instagram soaked world that we now inhabit but that is, at best, a case of coming to the right result for the wrong reason.

“What my work expressed was not merely the mountain of photographs which were displayed and accumulated, but it encompassed the entire range of near-futile activities from taking the photographs, developing them, rushing to the venue out in the suburbs (I encountered a Paris subway strike, so I had to take a taxi or even hitchhike just to make it to the venue), and exhibiting them.  It was thus a representation of something which very closely approximated the gratuitousness and purposelessness of our individual everyday lives.”

Nakahira’s essays on photography make for compelling, withering, at times depressing, examinations of what photographs mean and what it means (if anything) to make photographs.  “And,” as the folks at the gallery added, “what is even better is that he puts these ideas into practice.”  While his Paris 1971 project presents as utterly contemporary, Nakahira also cuts an old-fashioned figure with his visceral, manifesto-like critical pronouncements on photography and his scary willingness to follow his thoughts to whatever logical conclusion they may lead.  Nakahira glimpsed a way out of his rut in this Paris project and he soon followed it to its extreme conclusion of producing super-clean color photographs of mundane subject matter (chickens, scraggly flowers, gravel) in the pursuit of a radical objectivity that would irreparably sever him as an author from the individual photograph.  This is the desire to completely eradicate the person, let alone personal meaning (and it required, of course, the physical destruction of most of his negatives and prints up to that point).

His language and life have a Dostoevskian cast.  Often he will intrude upon his writings with, “forgive me if I have become quite emotional,” or “all this will be a bit personal.”  The opening sentence to “the Exhaustion of Contemporary Art: My Participation in the Seventh Paris Biennale,” reads: “The moment I stepped foot in the Seventh Paris Biennale on the afternoon of September 28th, I was assailed by an overwhelming sensation of hollowness which can only be described as a kind of despair.”  There were also breakdowns and permanent memory loss.

In reading the background essays for Circulation: Date, Place, Events I was glad to see that among the other Japanese artists selected to exhibit in Paris were Koji Enokura, Susumu Koshimizu and Katsuro Yoshida  — Mono-ha artists – and on reflection grouping Circulation: Date, Place, Events  with them makes sense.  To paraphrase curator Simon Groom, if “Mono-ha replaced the idea of the artist as creator, constructing images that reflected a pre-existing idea, in favour of the ground zero of art itself: the materials and the viewer’s experience of them,” then it is not farfetched to see in Nakahira the same contemporaneous urge to get to the ground zero of photography itself.

Critic Akihito Yasumi explains this well:  “In the dialogue with Moriyama mentioned above, Nakahira also repeatedly talked about ‘date’ and ‘place.’  With these terms, Nakahira stressed the impossibility of universal ‘art’ or ‘concepts,’ and as a result, stated that a photographer should ‘absolutely reject anything transcendental,’ to instead situate themselves within the ‘drift mediated by date and place.’  The concrete methodology offered to demonstrate this stance was, ‘to take a photograph each day like an observational diary.’”

The following passage near the end of his recent essay on reflecting on Eugene Atget “Looking at the City or, the Look From the City” sums up his hopes and fears on photography today.  It is as good a place as any as to why Nakahira should matter to you and why Yossi Milo Gallery should be commended on mounting this show and why you should consider spending time with his photobooks if you are unable to see  the prints in person (or even if you are).

“Photography ‘as art’ will be placed in the hands of a privileged few. And at the same time, this sort of art-photography will become increasingly divorced from reality and history, and in proportion, acquire an increasingly ‘sacred’ character. However, these few will not be able to obtain the potentiality that photography has by its very nature, to expand our perceptions, and to lay the world bare (precisely in the way that Atget’s photographs do). On the contrary, it is certain that the intrinsic function of photography will been grasped by the masses more strongly than in recent photography, contingent upon the development of film technologies. I said the masses. This does not refer to the “amateurs,” the bad imitators of the “authors” of the day. These “amateurs” are the colossal reserve army of “authors.” They just carry out the bad extended reproduction of the aesthetics and images brandished by the “author.” The masses I refer to precisely indicate the anonymous masses. It is within the specificity of photography’s intrinsic nature, for which it matters not who took the photograph but how it reveals the world, that photography will be evaluated and at the same time will acquire its true anonymity. The anonymity I speak of can only be achieved from within this kind of historical flow.”