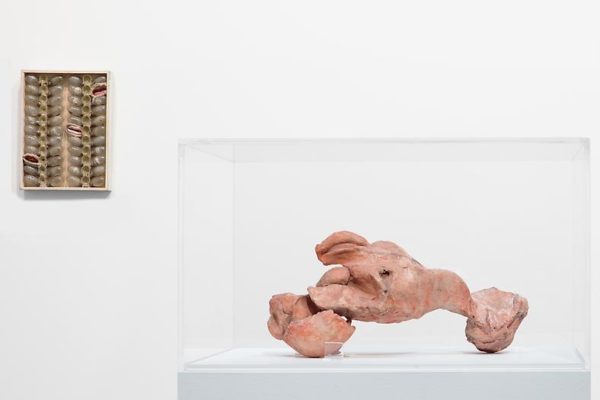 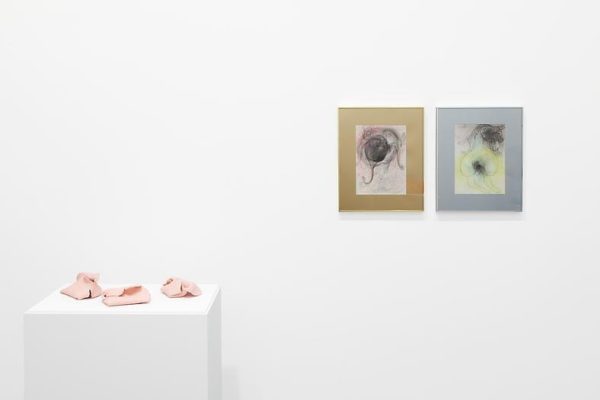 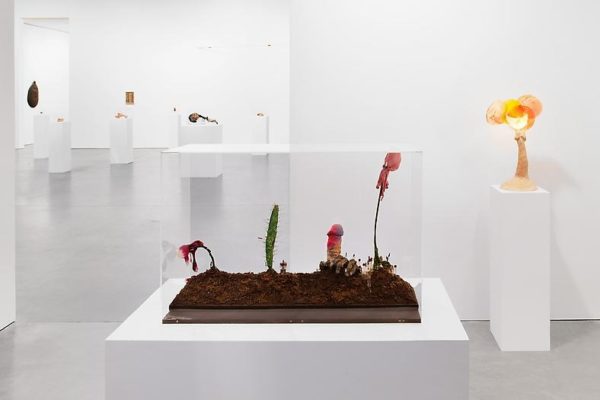 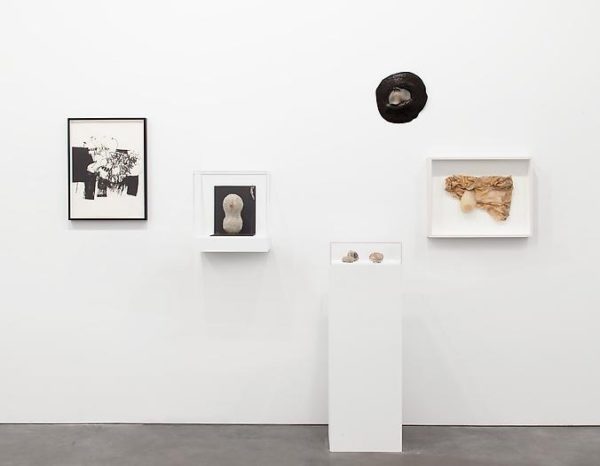 The tag, “historically important,” typically indicates that to get interpretive mileage out of the show you will need a hefty dose of background — biographical and art historical.  What makes this show remarkable is that each artwork on display while indeed historically important is still able to command attention and speak for itself, background knowledge or not.  That said, to spend some time and learn about each of the exhibited artists only serves to make the work all the more hard-hitting (Szapocznikow survived Nazi ghettos and concentration camps, being one example).

The exhibited works are pretty small and the installation compact.  They are inexplicably riveting each and every one.  Before you know it, you find yourself drawn along from vitrine to wall to vitrine, each work pulling you ever so nearer, repulsed, enthralled and in a bit of awe as to how the hell, by what technique, was this stuff made (and conserved).

The thinking behind the title, “Counter Forms,” and the artistic voices presented therein is set forth in the well-argued and informative release:

“Theirs was an art of bodily traces: repeatedly, obstinately, Kudo, Szapocznikow, Thek and Wilke made forms that were by turns gangly and awkward or strangely elegant, and often involving body casting or references to the body through material agglutinations of new and experimental materials of their day, including latex, resin, and poured polyurethane. The results were resolutely handmade with a charged immediacy and an aesthetic and conceptual volatility to them that far outweighed their often diminutive, human scale. Penises float in resin or sprout from buckets, delicate folds of terracotta conjure orifices both inviting and dangerous, while latex lips, butts, noses, and chins offer themselves as curious indexical traces of real bodies, figuratively dismembered. As biting as they are unexpectedly humorous, they were provocations to much sculpture being made at the time.”

“Intractable, unsettling, one could call them ‘counter forms’: decidedly not formalist exercises and yet not totally amorphous either—forms they are. In their embodied intimacy and sexual candor and in their anti-heroic stance, they offered their own uncanny riposte to the commercial imagery of Pop art, the pure geometry or industrial facture of so much Minimalism and the dry, immaterial practices of Conceptual art. Kudo, Szapocznikow, Thek and Wilke’s works spoke of the flipside of their contemporary moment’s lust for idealized commodity objects and, with it, any naively optimistic view of reality or its sexual politics. They dared to make an art so questioning that it would allow its maker ‘to doubt everything completely’ as Kudo once wrote; an art that was imperfect, built from ‘awkward objects,’ as Szapocznikow called hers; or, in Wilke’s words ‘an art close to laughter, making love, (or) shaking hands,’ and which brought, as Thek explained, ‘the raw human fleshy characteristics back to the art’ against the period’s ‘enormous tendency toward the minimal, the non-emotional, the anti-emotional even.’”