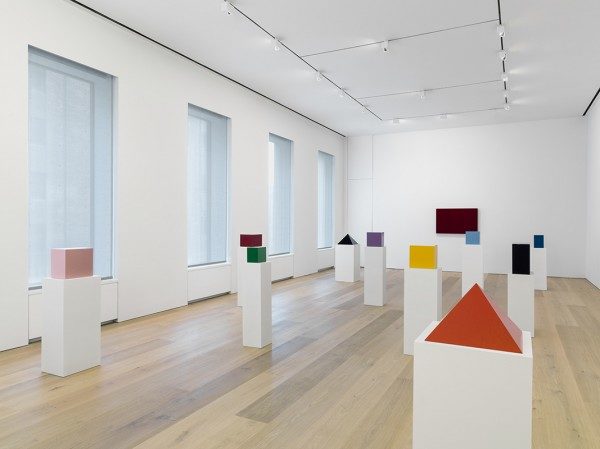 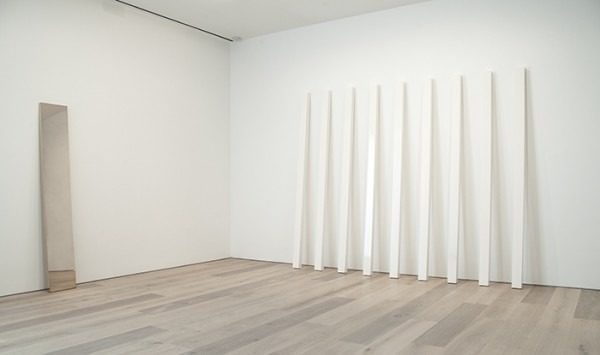 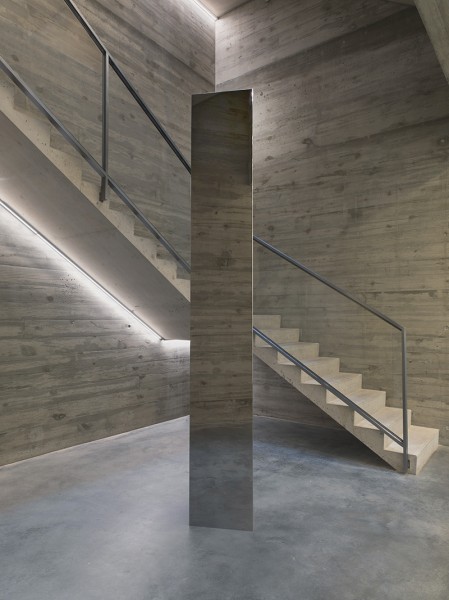 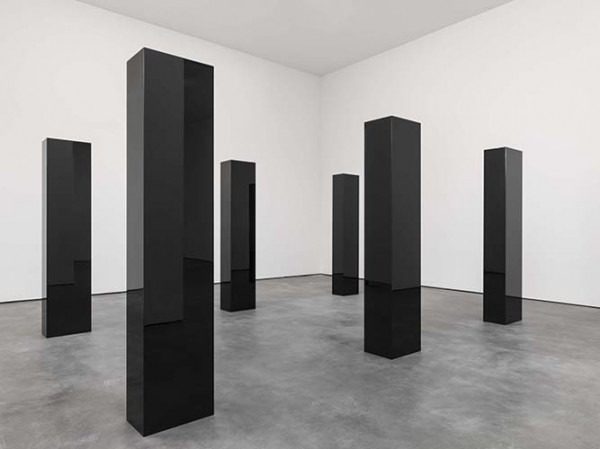 My knowledge of the west coast minimalist sculptor John McCracken prior to entering the museum-grade retrospective at David Zwirner’s 20th street outpost was limited to a handful of reproductions in art history books and the apocryphal story that his work had inspired the monolith in Stanley Kubrick’s 2001: A Space Odyssey.  I entered the show wanting to like it, figured I wouldn’t, and left with a renewed sense of what color, form, light and mass could be in the right hands.

The show covers both the ground and second floors of the gallery with the stronger – because slighter and more intimate – work on the upper floors.  For those like me who were not overly familiar with McCracken’s work, the monolith in 2001: A Space Odyssey is not an inaccurate image to hold in your head.  His language was that of square-edged plinths, bigger than a person but not imposing, narrow planks leaned up against the wall, sometimes in series, and crystalloid forms.  The planks were a breakthrough made in the mid 1960s that McCracken continued to work through and with for the remainder of his career.

As the gallery notes, “Highlights from the exhibition include a room-size installation of six monumentally scaled black columns, a layout introduced by the artist in his sketchbook in the early 1970s, but first produced and shown at David Zwirner in 2006; as well as an adjacent room containing stainless steel sculptures from 2011, which are polished to produce such a high degree of reflectivity that they seem translucent and camouflaged, bordering on invisibility as they reflect their surroundings.”  It’s no joke what McCracken managed to achieve with his surfaces: transparent one moment, then solid, dissolving into reflections the next, it is eye-popping that such biggish things can be fugitive and featherweight. (A gentleman by the name of David Behringer has really captured the high gloss and fleeting nature of the sculptures here).

It was all the more impressive to later read in the New York Times obituary for McCracken (2011) that he did not — as his contemporaries were known to do — contract out to fabricators but rather “made most of his work by hand, sanding and polishing his enamel, lacquer or resin surfaces until their colors achieved a flawless and reflective perfection.”

The small-to-medium geometric pedestal sculptures and two wall pieces (paintings really, I suppose) from the 1960s and 1970s occupying the second floor at first solicit a shrug (e.g. cherry red pyramid on a white pedestal).  However, being experienced after the heftier work on the first floor, they quickly fatten in the eye and their formal economy and inhumanly perfect surfaces come across as masterful.  By the time I walked out of that room they made perfect sense as objects in the world.

Around the corner along the hallway were drawings and jottings casually framed in Plexiglas.  One typewritten page pretty much summed it up:

I think of color as being the structural material I use to build the forms I am interested in.  The fact that in another sense I use plywood, fiberglass, and lacquer as structural materials is of less importance.  I have found that a certain range of mainly primary and secondary colors and a certain combination of color intensity and transparency and surface finish provide me with the expressive means I want, at least for the present.

All images are courtesy David Zwirner Gallery, New York and copyright of the Estate of John McCracken.