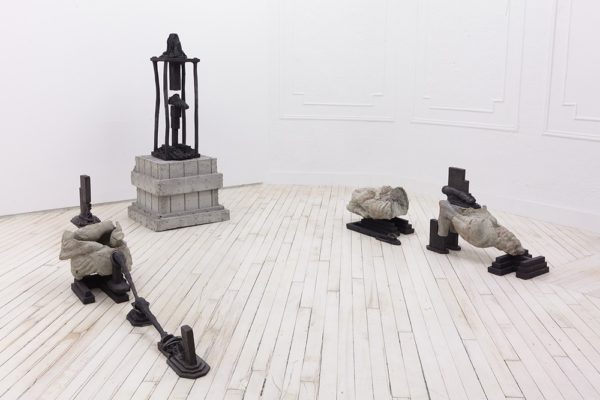 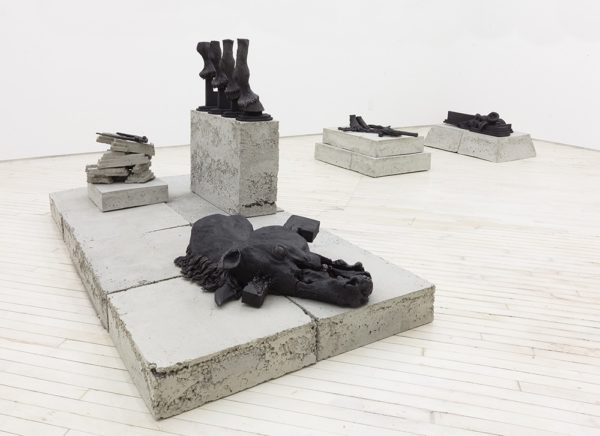 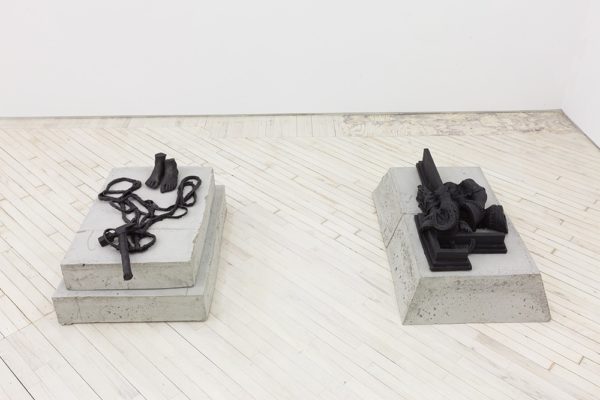 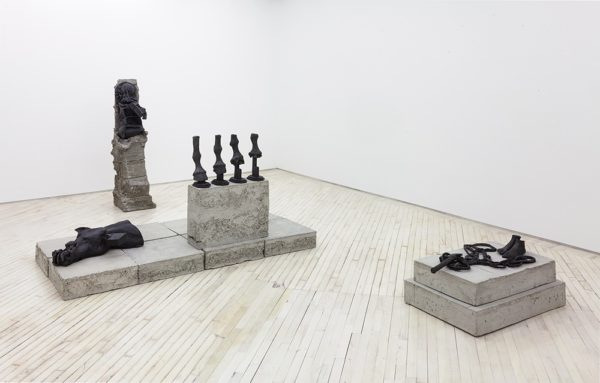 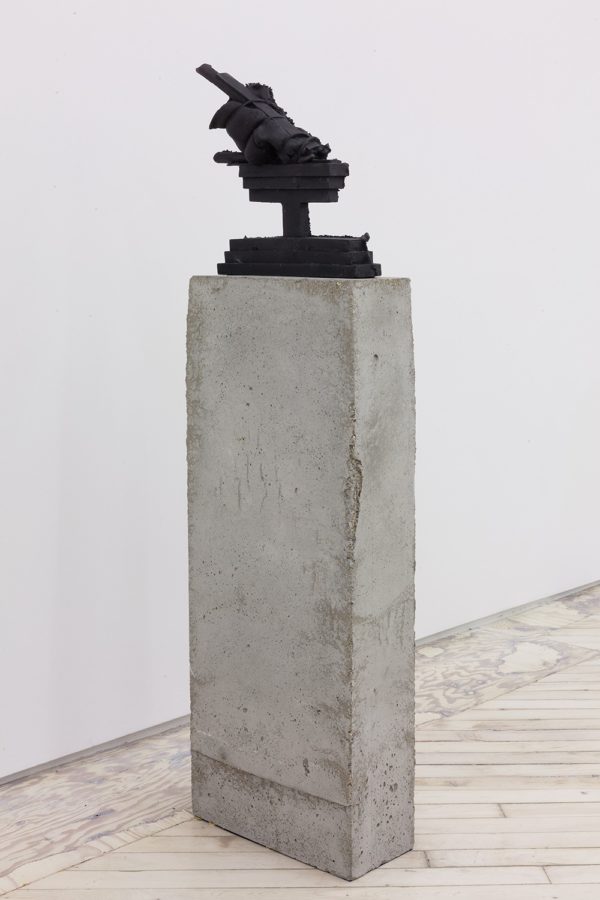 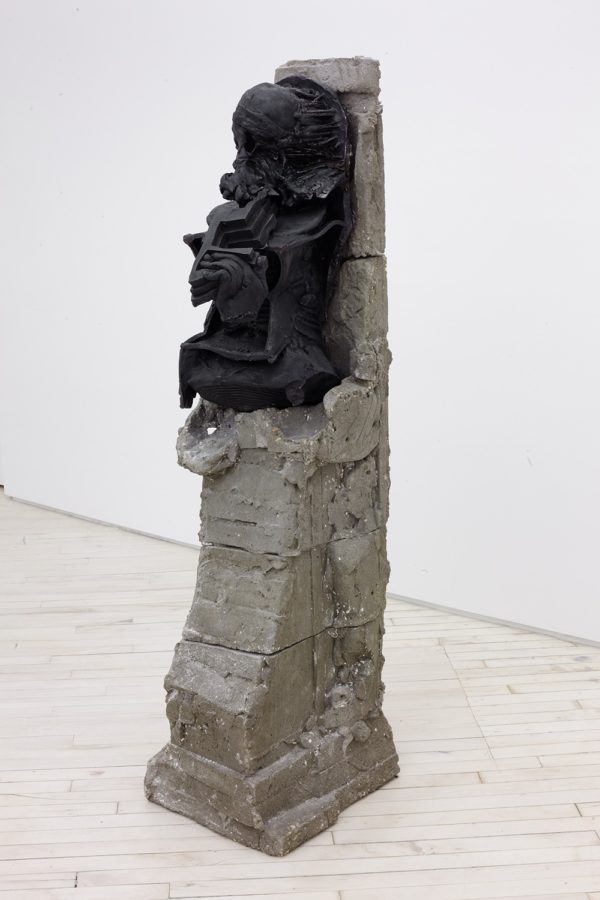 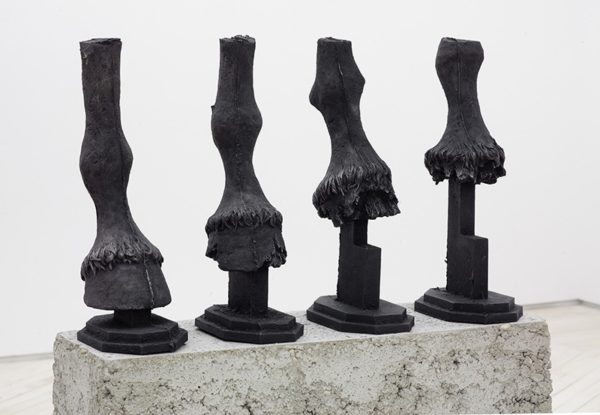 It’s often revelatory and requires a bit of self-discipline to step into a contemporary art gallery and take in the show without having first resorted to the gallery release to get one’s bearings.  It’s revelatory because, every so often, the intellectual and emotional tenor of the art at hand is transparent and immediate without the guiding voice of the gallery release.  It’s also somewhat unfair because it’s not saying anything new to note that the nature of the game in much contemporary art is the intellectual context in which the artwork was created and within which it was intended to be contemplated.

I played this private game of going in blind to Lionel Maunz’s solo show of eight sculptures entitled Deluge at Bureau in the Lower East Side and the result was a happy one.

The sculptures gave the initial impression of embodying was the violence inherent in the collision of the horse-drawn age with the mechanical (think pulverizing objects, like a locomotives).

The pieces are comprised of natural colored concrete bases and plinths on which are set forth a mutilated horse head, four hooves in varying states of decay, the severed feet of a child, assorted and (to me) unidentifiable tools, and disturbing organic forms set cheek-to-cheek against oppressive and severe architectural ones (railroad ties, perhaps).  All of these forms were cast in mute, black iron.  The sculptures are human scale with the largest, The Deluge, coming in at 43x44x89 inches.

Together, the array served as a blunt and nasty reminder that this is what we are talking about when we toss about concepts such as “horsepower:” it’s not an innocent term.  It is instead shorthand for the crude and brutal harnessing of power in the name of calculated efficiency.

So, it turned out I got the emotional tenor of the work but, on circling back to read the gallery release, the context of the work was not a critique of the industrial past but rather an impassioned conversation with a painting, The Deluge, by early Renaissance artist Paolo Uccello.  The gallery release presents Maunz’s proposal through a wonderful interview with Gabrielle Giattino, the owner and director of Bureau.  (It also thoughtfully provides a reproduction of The Deluge, a painting I was not familiar with.)

As Maunz explained it…

LM: In Uccello’s work perspective is a geometric barbarity. Narrative and figuration are both incidental to this unrelenting principle of linear constraint which in this painting forms a frame within which cruelties are acted out. In the fresco you have the Ark, which frames both sides of the painting in tapering walls of a trapezoid. On the left, we see action taking place during the flood, showing desperate situations of violence. On the right, are scenes from after the flood: the ground littered by bloated, dying bodies. The Ark walls frame the scene, making it an interior. It’s a reversal which situates all the violence inside the Ark, not as a place of salvation but as a tomb.

I’ve been obsessed with this Uccello painting since I first saw it in reproduction, and got a chance to see it in person in 1999. What excites me about it is the conversion of fear to violence: a coalescing of terror into this desperate spasm of ruin. I look at the fresco and want to agitate, to exacerbate it, to ensure that nothing is spared.

Further into the interview he makes an observation, perfectly and simply perceived, that, “In Uccello’s painting there is a drowning man clutching at Noah’s ankles. One thing I hate about this painting is the central figure of Noah praying, thanking god for his salvation. I thought to substitute Noah for the Saturnian figure reveling in the cataclysm. Which is also me. One of the pieces in my show is an inversion of this scene: a foot crushing a hand, pushing it down, ending rather than saving.”

The funny thing is, though this all may sound unrelentingly mean and depressing, the show is shot through with a feeling of warmth somehow, for you, for me.  And while, by reading this, you have deprived yourself of the opportunity of going in blind to this show, it probably doesn’t matter, because in the end its voice is fierce enough that you will walk out enervated but happy anyway.

LIONEL MAUNZ DELUGE  At Bureau in New York through February 9, 2014.

All images appear courtesy of the artist and Bureau, New York.