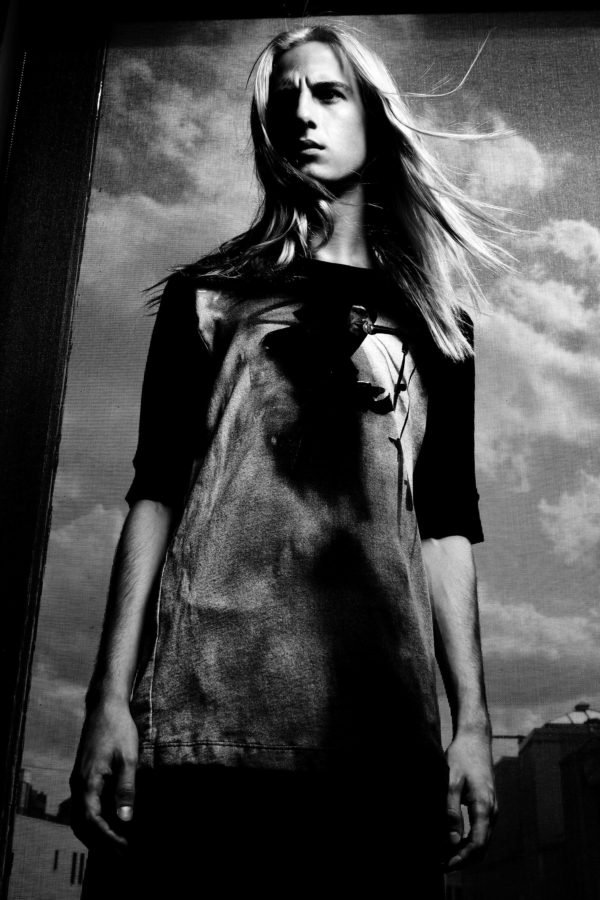 “I had been a fan of Alexandre’s work since the Cloak days and was excited about his new label. I wanted to work with him for a photo/video shoot which we had never approached a designer about before,” said Eisold. “Amy Lee and I were revisiting Russian suprematism, about to tour Russia and working with the Russian director Slava Tsukerman. Plokhov seemed like the missing link.”

Plokhov, in turn, said, “I have been a fan of Cold Cave since I heard Love Comes Close. It was a great album that really stood out in the utter singularity of its sound and worldview. I really liked how the synths sounded both ‘dancey’ and sinister at the same time. Similarly, Wesley’s voice projected both power and yearning. Being an unapologetic post-punk/goth/dark wave aficionado I was instantly hooked.”

Eisold met Plokhov through a mutual friend. They instantly hit it off and got together whenever they happened to be in the same place (Plokhov is based in New York and Cold Cave in Los Angeles). At some point, Plokhov floated the collaboration idea. “Alexandre had just done these beautiful graphic tees for a collection with a printmaker who makes the Givenchy shirts, and we just received  photos of us performing in Russia that really captured the essence of the statement, ‘To the suprematist, objects are meaningless, the significance is feeling.’ After all, it’s just a t-shirt, but it means much more,” said Eisold.

“Wesley gave me a fan’s photo taken at Cold Cave’s  concert in Moscow. It was absolutely perfect,” Plokhov added. “I have always been a fan of old Sisters of Mercy t-shirts — the way they projected the band’s essence without explaining anything. I wanted to do something like that for a long time – this was my chance. So we came up with a 360 degree wraparound, reversed negative image with the band’s logo placed at the center back neck. There is no band name, just the image — absolutely minimal (only white pigment was used for printing), yet perfectly complete. And of course, it only comes in black because, in my humble opinion, band tees must never come in any other color.”

The shirt will be available this season at:

Patron of The New in New York

The Serpentine in Toronto