The Morgan Library & Museum: A Dialogue with Nature & Sky Studies 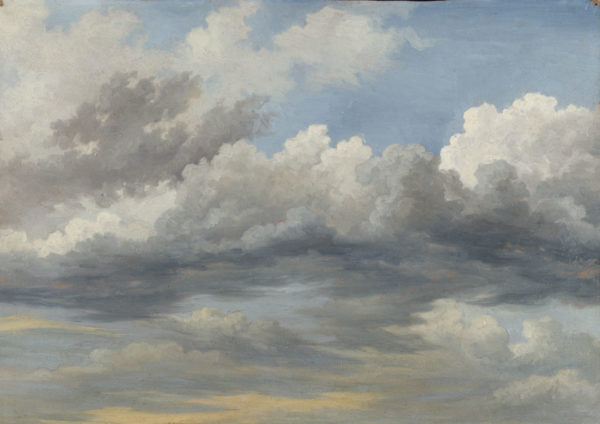 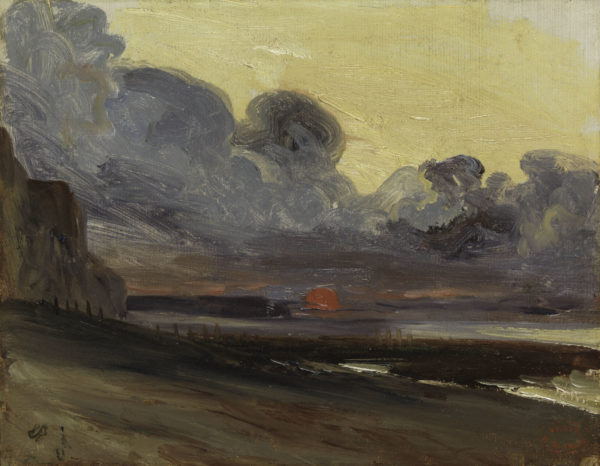 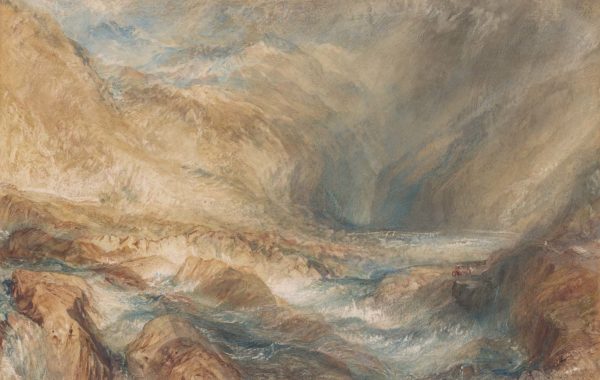 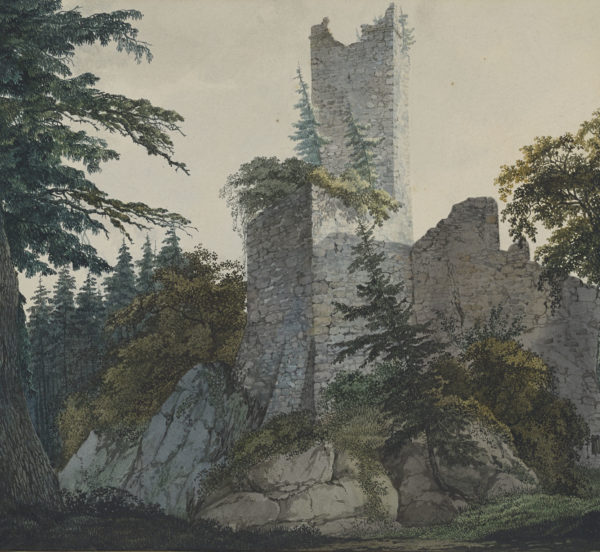 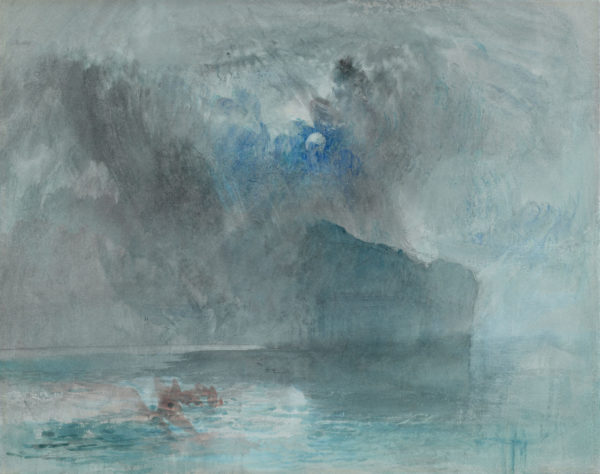 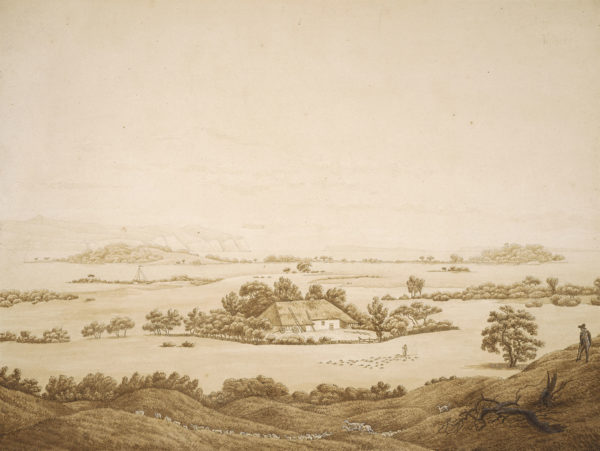 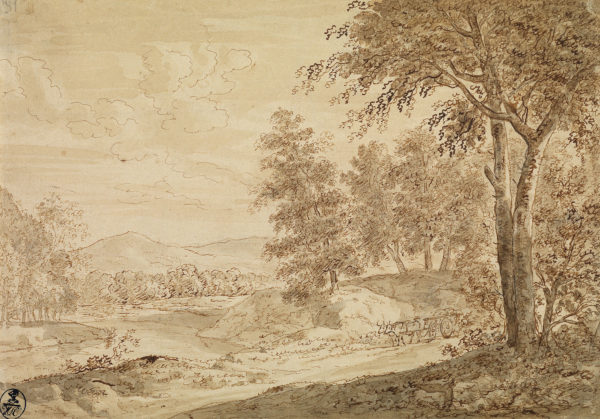 It is a happy thing that in the Morgan Library & Museum, in the heart of Manhattan, you can have the place – and the art — so to yourself as to actually hear your footfalls on the gallery floors.

For a small museum begun as the personal library of financier Pierpont Morgan and principally dedicated to drawings, manuscripts and books, the Morgan punches well above its weight class and in that respect it deserves to be thronged but lucky for us it isn’t.

Currently up at the Morgan are two somewhat related shows of landscape drawings, “A Dialogue with Nature: Romantic Landscapes from Britain and Germany,” and oil sketches of skies and clouds, “Sky Studies: Oil Sketches from the Thaw Collection.”

In all, the fifty or so works on display are old (from the first half of the 1800s), small (the largest could be carried under your arm), made with modest materials and (chiefly) in the open air, and, aside from a handful of marquee names (Thomas Gainsborough, J.M.W. Turner, Caspar David Friedrich), are from the hands of British and Northern European artists known only to professionals of art history.

That said it is hard to formulate why these two shows feel so fresh, bristling, alive and relevant. They – a what, an eight by ten inch oil on cardboard “Cloud Study” dashed off in1830s Scandinavia, a British cottage and cow in inky washes — somehow charm you to death.

This is attributable to the Morgan’s eye for quality, yes, but also because it manages to do what the novelist Orhan Pamuk says small museums do well:

“My favorite museums tend to be small, the kind that showcase the inventiveness and the life stories of private individuals. Though I admire national museums like the Louvre or the British Museum, when I’m traveling and whenever I set foot in a new city, the first places I rush to see are not these institutions that fill me with a sense of the power of the state and of the history of its people, but those that will allow me to experience the private world and the vision of a passionate individual. I have so much respect for the efforts of those creative people who devoted the final decades of their lives to the task of turning their homes and their studios into museums for the public to visit after their deaths. These small museums are usually hidden on side streets just outside the center of large Western cities. They have the power to make us rediscover a feeling that the big national museums, looking more and more like fun-filled shopping malls with each passing day, can no longer make us feel, and that we have begun to forget. Museums must not confine themselves to showing us pictures and objects from the past; they must also convey the ambiance of the lost time from which those objects have come to us. And this can only happen through personal stories.”

In fact, bookishness rather than journalism seems the better approach to capturing the special quality of these two shows. (For a solid, descriptive treatment, see here and here).   Not one to reinvent the wheel, and poorly at that, I leave you with this extended quote from “My Struggle: Book 1” by Karl Ove Knausgaard:

“… It was a book about Constable I had just bought. Mostly oil sketches, studies of clouds, countryside, sea.

I didn’t need to do anymore than let my eyes skim over them before I was moved to tears. So great was the impression some of the pictures made on me. Others left me cold. That was my only parameter with art, the feelings it aroused. The feeling of inexhaustibility. The feeling of beauty. The feeling of presence. All compressed into such acute moments that sometimes they could be difficult to endure. And quite inexplicable. For if I studied the picture that made the greatest impression, on oil sketch of a cloud formation from September 6, 1822, there was nothing there that could explain the strength of my feelings. At the top, a patch of blue sky. Beneath, whitish mist. Then the rolling clouds. White where the sunlight struck them, pale-green in the least shadowy parts, deep-green and almost black where they were at their densest and the sun was farther away. Blue, white, turquoise, greenish-black. That was all. The text describing the picture said Constable had painted it at Hampstead at noon, and that a certain Mr. Wilcox had doubted the accuracy of the date as there was another sketch made on the same day between twelve o’clock and one that showed quite a different, more rain-laden sky, an argument which was rendered invalid by London weather reports for this day, as they could easily have described the cloud cover in both pictures.

I had studied history of art and was used to describing and analyzing art. But what I never wrote about, and this is all that matters, was the experience of it. Not just because I couldn’t, but also because the feelings the pictures evoked in me went against everything I had learned about what art was and what it was for. So I kept it to myself. I wandered around the Nationalgalleri in Stockholm or the Nasjonalgalleri in Oslo or the National Gallery in London and looked. There was a kind of freedom about this. I didn’t need to justify my feelings, there was no one to whom I had to answer and no case to answer. Freedom, but not peace, for even though the pictures were supposed to be idylls, such as Claude’s archaic landscapes, I was always unsettled when I left them because what they possessed, the core of their being, was inexhaustibility and what that wrought in me was a kind of desire. I can’t explain it any better than that. A desire to be inside the inexhaustibility. That is how I felt this night as well. I sat leafing through the Constable book for almost an hour. I kept flicking back to the picture of the greenish clouds, every time it called forth the same emotions in me. It was if two different forms of reflection rose and fell in my consciousness, one with its thoughts and reasoning, the other with its feelings and impressions, which, even though they were juxtaposed, excluded each other’s insights. It was a fantastic picture, it filled me with all the feelings that fantastic pictures do, but when I had to explain why, what constituted the ‘fantastic,’ I was at a loss to do so. The picture made my insides tremble, but for what? There were plenty of clouds around. There were plenty of colors around. There were enough particular historical moments. There were also plenty of combinations of all three. Contemporary art, in other words, the art in which principle ought to be of relevance to me, did not consider the feelings a work of art generated as valuable. Feelings were of inferior value, or perhaps even an undesirable by-product, a kind of waste product, or at best, malleable material, open to manipulation. Naturalistic depictions of reality had no value either, but were viewed as naïve and a stage of development that had been superseded long ago. There was not much meaning left in that. But the moment I focused my gaze on the painting again all my reasoning vanished in the surge of energy and beauty that arose in me. Yes, yes, yes, I heard. That’s where it is. That’s where I have to go. But what was it I had said yes to? Where was it I had to go?”

Sky Studies: Oil Sketches from the Thaw Collection, through December 28, 2014.

A Dialogue with Nature: Romantic Landscapes from Britain and Germany, through September 7, 2014.

Both at The Morgan Library & Museum Madison Avenue at 36th Street, New York.

1, 2 & 3 courtesy The Thaw Collection, jointly owned by the Metropolitan Museum of Art and the Morgan Library & Museum; gift of Eugene Thaw, 2009

6 & 8 courtesy of The Courtald Gallery