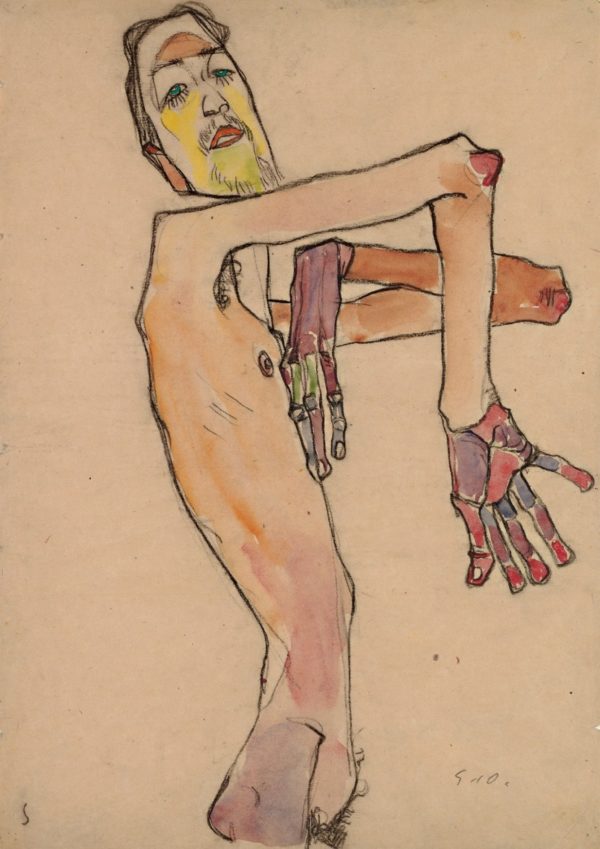 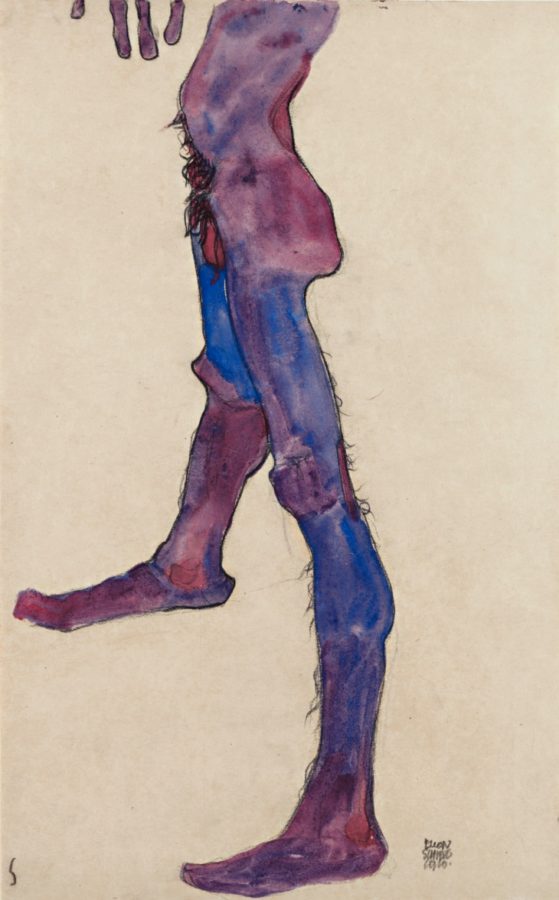 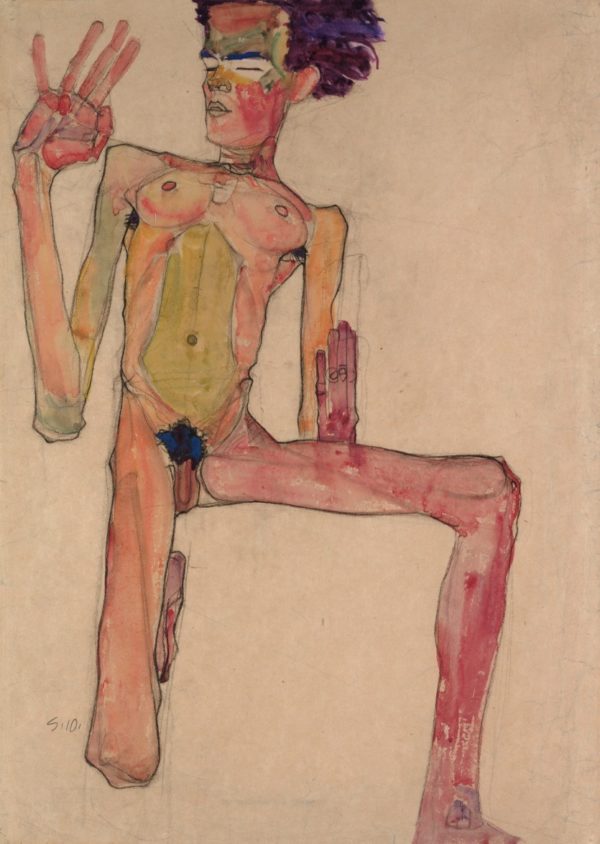 ‘Tis a Schiele season. In New York one can head to Neue Gallery for a glimpse of what the Austrian modernist painter Egon Schiele made out of clothed bodies.

Meanwhile, in Zurich’s Kunsthaus, there is another show where Schiele’s work is displayed alongside that of YBA Jenny Saville’s, exploring their common approach to the naked body. The nudes continue in London’s Courtauld Gallery.

Some nudes are nuder than others. Egon Schiele’s certainly are. In fact, some art theorists probably wouldn’t classify them as nudes at all: women, men, children and infants in his work appear just plain naked.

As Lynda Nead argues in her seminal book Female Nude: Art, Obscenity and Sexuality: “The forms, conventions and poses of art have worked metaphorically to shore up the body – to seal orifices and to prevent marginal matter from transgressing the boundary dividing the inside of the body and the outside”.

She goes on to cite art historian Kenneth Clark on the difference between nude and naked: “It is a distinction between bodies deprived of clothes, ‘huddled and defenceless’, and the body ‘clothed’ in art: the nude is the body re-formed rather than deformed, ‘balanced, prosperous and confident’”.

Schiele’s work certainly doesn’t shore up the bodies it depicts. Orifices are not just left unsealed but, where possible, accentuated – with bright red, in most cases. Marginal matter is not prevented from transgressing any boundaries – on the contrary, some of the figures look as if they are barely carved out of the garments that surround them.

Schiele’s bodies are nothing if not huddled and defenceless, and as far as possible from balanced (cue: his favourite unnatural, wildly uncomfortable poses) or prosperous (they are, for the most part, emaciated).

There is nothing pleasant or pacifying about them. In short, they are not quite the artistic nudes an art lover routinely sees in a gallery, let alone in WWI-era Vienna where the artist was working.

The exhibition that has opened in Courtauld Gallery focuses exclusively on Schiele’s nudes and showcases around 40 drawings. According to the curator Dr. Barnaby Wright, the medium of drawing was particularly important for Schiele because it allowed him to explore subject matter that otherwise would have been tricky to tackle: a drawing is, usually, only a study in form; it’s not meant to be loaded with as much meaning as a painting, and nor is it treated as seriously.

Thus, one of the drawings of Schiele’s wife Edith, Reclining Nude (1917), has her genitals exposed, whereas the subsequent painting has them covered, albeit in a provocative way. Most of Schiele’s drawings, however, are coloured: he would sketch them in charcoal or pencil from a sitter and leave them on the side for a while, then come back with watercolours and spend more time on the colouring than he did on the drawing itself.

It represents most key motifs of Schiele’s nudes: a woman lifting her skirt or pulling down her dress to reveal her, often rouged, genitals and nipples (although missing are some of the ruder versions where she opens her labia); self-portraits as a martyr – twisted, skeletal, apparently tormented and often surrounded by a halo; two barely clothed women sharing an embrace; cryptic, arcane hand gestures inspired by mime and cabaret artist Erwin Osen, who was Schiele’s great friend for a while (until he stole some of Schiele’s materials and the two fell out); cropped off heads and obscured faces that force the viewer to concentrate on body and pose; convulsive rhythms, distorted poses and a sense of urgency.

In his talk at the opening Wright remarked that Schiele was inspired by photographs of hysterical patients that were widely circulated by the media at the time, as well as by early pornographic imagery. His work references high and low culture alike. No wonder a recent New York Times article referred to it as “punk before punk.”

Another article, published around ten years ago, questioned whether his art would be considered paedophilic by today’s standards: a valid concern, given modern-day puritanism, and certainly one that would have been understood by the Austrian authorities that in 1912 briefly imprisoned Schiele on the grounds of violations of decency and morality. Punk indeed.

The exhibition is chronological and traces Schiele’s drawings from 1910, which is thought to be his breakthrough year, to 1918, the year of his untimely death. Halfway through, in 1914-15, around the time of the breakup with his lover Wally Neuzil and marriage to respectable Edith Harms, his style changes: the eroticism and urgency remain, but the distortion, convulsions and deathliness are gone; lines grow smoother; sinister purples, hues and blacks give way to a more joyful palette.

According to Wright, by that time he was becoming an established artist, rather than an outcast: he had a small but faithful coterie of collectors that bought primarily his most expressive nudes; he was able to show even his most explicit pieces publicly in the galleries of Vienna and Munich; production community Wiener Werkstatte, which had previously rejected his drawings as lacking in the fluidity necessary for the Arts and Crafts movement, started reproducing his work on postcards, and state museums started buying it. He did away with delinquent youths as sitters and was now hiring professional models.

It looked like Schiele was about to become one of the most prominent artists of his time, but it wasn’t to be: in 1918 he died of Spanish flu at the age of 28, three days after the death of his pregnant wife of the same cause. The last crayon drawing in the exhibition, Woman in Boots with Raised Skirt, is that of her, done a few months before her illness.

It is a pity that there are hardly any early, pre-1910 drawings in the show that would allow us to see Schiele’s approach to the nude before he found his unique style (there is a study from 1909, frankly undistinguishable from the works of Schiele’s mentor Klimt).

But it’s an even greater pity that there are no post-1918 drawings – something clearly beyond the curator’s control! – because upon leaving the exhibition one cannot help wondering how Schiele’s vision of the naked body would have developed had he made it out of his twenties.