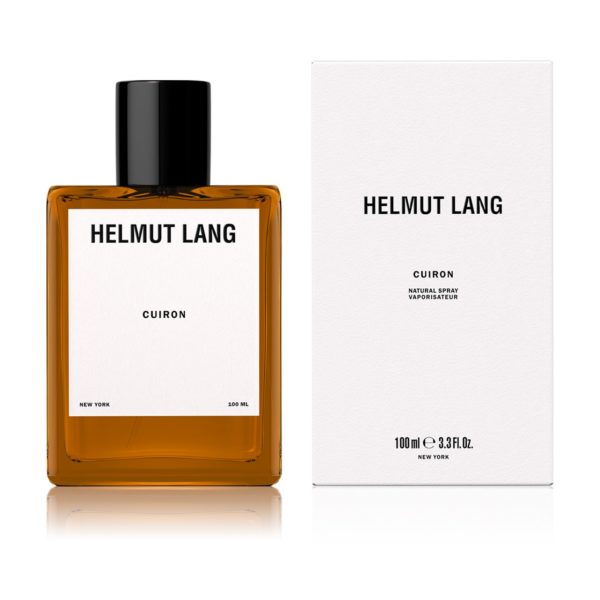 When Helmut Lang came out with a perfume duo in 2000 and followed up by a third one in 2002, it was one of those rare fashion moments that occurs when an independent designer with a cult following translates his vision to another medium, thereby expanding his world.

Who can forget (and by who, I mean those over 35 and really interested in fashion) the iconic ad campaigns on New York’s taxis or the long narrow SoHo store opposite Lang’s flagship where you could only by those three products, the very definition of minimalism?

When the perfumes were discontinued after Lang’s departure, collectors hoarded what they had and the scents fetched a pretty penny on the secondary market. This month, however, the current Helmut Lang brand re-released all three scents at once, so you can stop playing Gollum with your stash.

Last week I went to sample the scents at the Helmut Lang shop on Mercer St. in SoHo. As I approached the boutique I was greeted with a row of flat screens in its window advertising the relaunched scents.

I walked in, and I admit that my heart skipped a bit at the site of the familiar bottles, its basic rectangular shapes, the white labels, and the sans serif font. If ornament is crime, as Adolf Loos once proclaimed, here was the evidence.

Years passed since I have last smelled the HL scents, and I don’t claim to having had a Proustian madeleine moment in the shop, but all three smelled alluring, and the company states that all scents are released in their original, unaltered formulation.

The duo of Eau de Cologne and Eau de Parfum have the same notes, with top notes of lavender, rosemary, artemisia and orange tree, middle notes of jasmine, rose, heliotrope, and lily of the valley, and with dry down notes of virginian cedar wood, Indian sandalwood, vanilla, musk, and amber. The Eau de Parfum is more concentrated, and therefore a bit heavier and muskier. Which is not saying much, as both scents are bright and easy to process.

The third scent, Cuiron, is more subtle, contrary to what you might expect from a scent named after leather. Usually, I find leather scents to be off-putting because of their very nature, but Curion’s leather notes are really understated. The top notes of bergamot, Italian mandarin, and pink peppercorn offset them nicely. For those of you who are into the nitty gritty – the middle notes on Cuiron are cassia and carrot seed oils, and the dry down notes are olibanum, labdanum, cedar wood oil, ambrette seed absolute and suede accord. The result is actually a quite cold, in the best sense of the word, scent that does not send you into olfactory overdrive.

Helmut Lang perfumes available now at select Helmut Lang boutiques in the US and at www.helmutlang.com
European release is slated for October 31st.