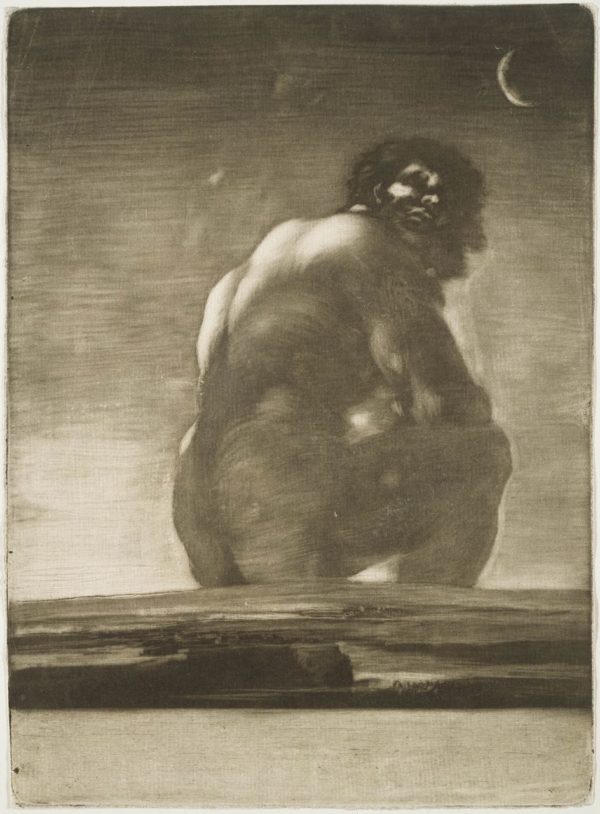 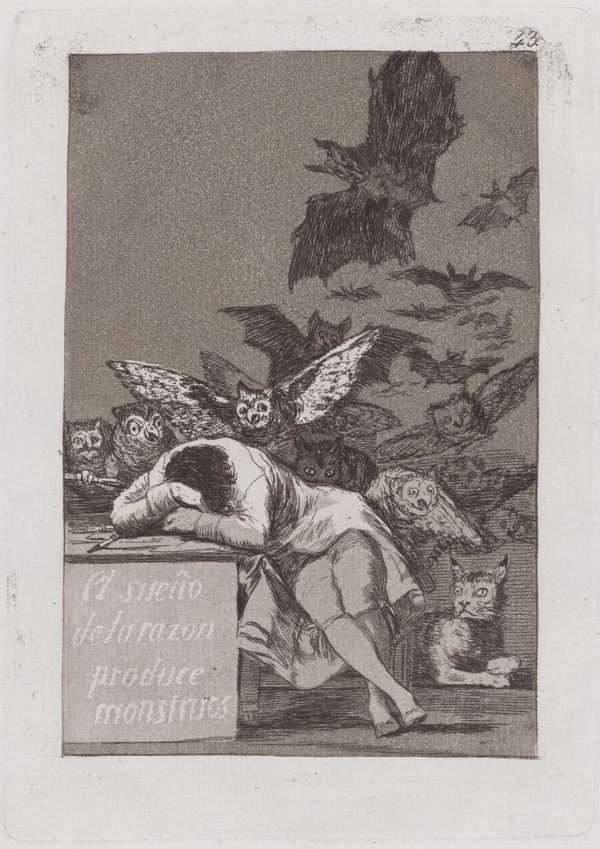 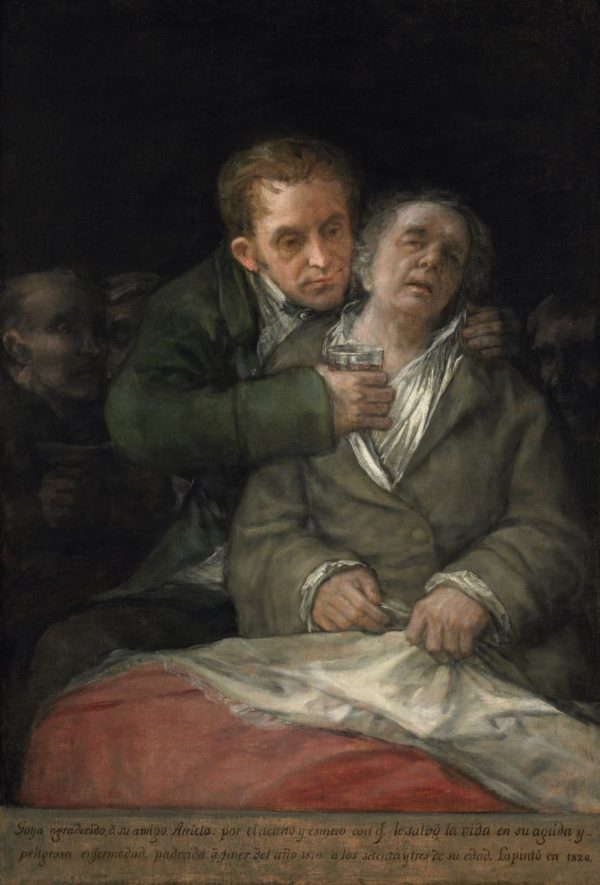 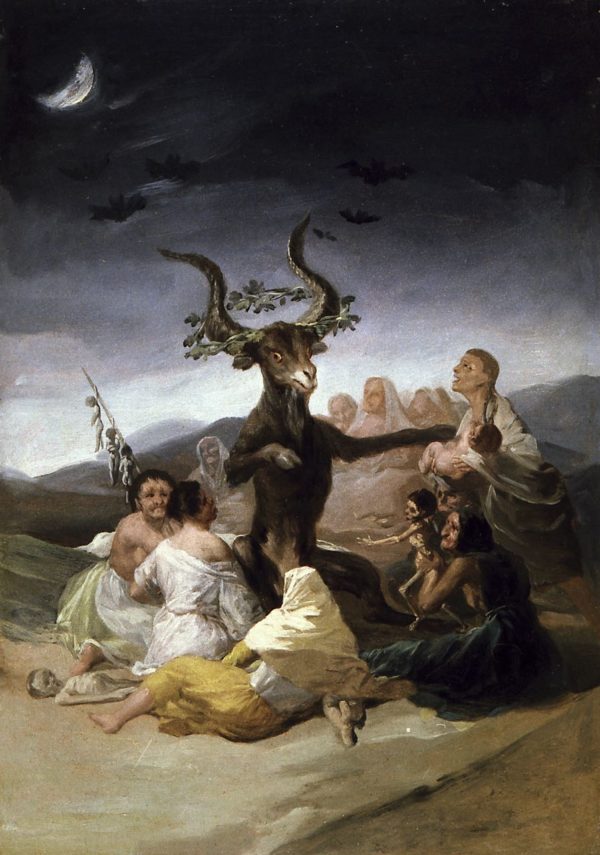 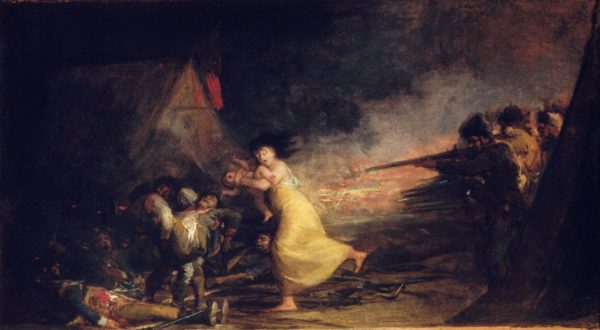 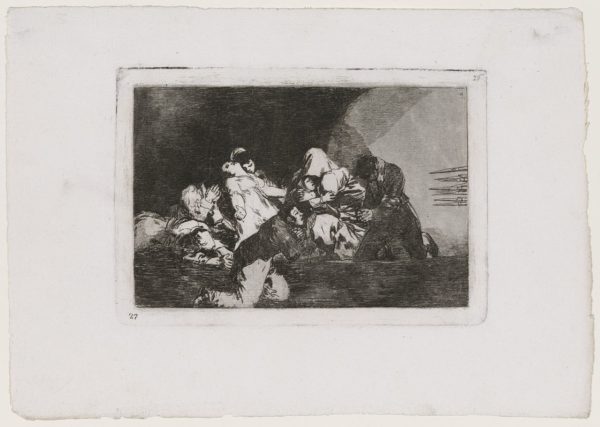 If by mixing works from different periods and media the curators of Boston’s Museum of Fine Arts exhibit Goya: Order and Disorder strived for their viewers to appreciate the artist’s versatility, their efforts have surpassed their mark.

With 170 paintings, prints, and drawings occupying eight thematically categorized rooms, the display is diverse and comprehensive. In fact, the exhibit showcases Francisco Goya’s range of traditional court portraiture, whimsical prints, and etchings depicting the devastating effects of war so expertly that it makes you wonder how such multifacetedness can stem from one artist.

In the first room, themed “Goya Looks at Himself,” the viewer is met with a number of self-portraits. While the dominant centerpiece is “The Family of the Infante Don Luis,” where Goya inserts himself painting, working to capture the royal family on canvas, it is the more modest self-portrait painted in 1815 which beckons attention.

The painting is cast in tones of black, white, and muted burgundy, depicting Goya as an aging man not seemingly concerned with his audience. His gaze points inward, as the absorbed eyes reveal a man who has been witness to and participant of life’s hardships.

The painting is a stark contrast to the younger, self-conscious Goya costumed in a short jacket, tight trousers, and hat, staring directly at the viewer in “Self-Portrait while Painting” (1795). Also on display is a sketch “The Sleep of Reason Produces Monsters Caprichos 43” (1997-99), where owls and bats, among other creatures, hover, encircling the sleeping artist. Compositely, the works offer glimpses into Goya as a court painter, a solitary artist, an afflicted man, and a slumberer haunted by the darkness of imagination.

While the Life Studies theme contains a number of light hearted etchings and paintings depicting relationships, such as The Parasol, the main attraction is Goya’s monumental but savage “Time (Old Women)” (1810-12).

Two grotesquely corpse-like women attired in the fashionable dresses of the day sit awkwardly on wooden chairs beneath a powerfully suspended Time with his poised to sweep broom. One of them holds a program inked with “Que tal?” translating to “How are things?” It may have been Goya’s intent to unveil the old women’s vanity, but the painting for me only evoked revulsion toward the artist, for the rendering seemed devoid of any compassion.

In “Play and Prey,” three variations of a tapestry titled Straw Mannequin (1791-93) depict four women tossing a male mannequin in a blanket. The expressions on the women’s faces are intriguing, as they are not of glee, but more of placidness. The mannequin’s cranked neck casts an ominious shadow on an otherwise playful, bucolic scene. As indicated by the theme, the male mannequin must be symbolic of prey with which the women play, although the tapestry commissioned by King Charles IV was requested to be rural and jocose.

Also in the display are oil paintings of men hunting (a favorite pastime of Goya) and bullfighting.

More depiction of bullfighting can be seen in the section called In the Balance as well where “The Agility and Audacity of Juanito Apinani in the Ring at Madrid” (1815-1816) print of a matador holding on to a vault is poised in the air atop a charging bull is displayed.

The works in this category are meant to explore balance and imbalance, politically, socially, and physically, for Goya struggled with deafness (he lost his hearing after an undetermined illness at 47), dizzy spells, and various other ailments throughout his life.

The last two sections Other Worlds, Other States, focusing on spiritual explorations, lunacy, sanity, abuses of church, and superstition, and Capturing History, depicting horrors of war, are where Goya’s most intriguing work is amassed.

Although Goya considered himself foremost a painter, his imagination was most fluid in his sketches. Most mesmerizing is the wall dedicated to etchings and aquatints titled “Disasters of War” (1810-20). With impassioned determination and an unflinching eye, Goya captures what today would a photojournalist entrenched in war. Although he combines reality and imagination in his work, the devastation the sketches convey could belong to any area where masses are tortured and slaughtered.

One of the last paintings in the exhibit included in the theme Solo Goya is Self-portrait with Doctor Arrieta with the inscription: “Goya, in gratitude to his friend Arrieta: for the compassion and care with which he saved his life during the acute and dangerous illness he suffered towards the end of the year 1819 in his seventy-third year. He painted it in 1820.”

Although the work was created as a gift in gratitude to his friend and not a memento mori, it is difficult to dismiss a fixed image for posterity in its depiction.

Prior to the portrait, Goya had been commissioned to paint another painting, also on display in the room, “The Last Communion of San José de Calasanz,” where one cannot help note similarities in both rendering of the theme and use of color.

Both contain a savior and saved, as shadowy crowds lurk in the background; both are painted in dark, somber hues with a splash of red. However, while one was a commissioned work of a dead saint, the other was a work to honor a living doctor, as well as Goya’s revival.

While in theory the painting was meant to feature Dr. Arietta, the eye is drawn to Goya’s face looking up at the heavens, clutching on to the red cloth for life, and not Arietta’s diligent, kind, and yet somewhat unfocused gaze.

If there is any gripe to be had it’s with the way the exhibit’s artwork is organized. Although I can theoretically appreciate the purpose of this reshuffled retrospective, on a visceral level, the choice in ordering Goya’s work left me with mild vertigo.

The sequence of various mediums and subjects and questionably placed pieces (an oil still life of fruit next to a sketch from the Peninsular War) left me wondering: Was this sort of organization another emblem of our times, the era of content broken up by continual bursts of variety to keep one’s attention on point?

To an extent, it was. And it was effective, as it made the passage from one wall to another, one room to the next, unpredictable and exciting. But although I left the exhibit with a far greater knowledge and curiosity about Goya, the exhibit, in turn, left me with an uncomfortably scattered impression of his life’s work.

All images courtesy of Museum of Fine Arts, Boston