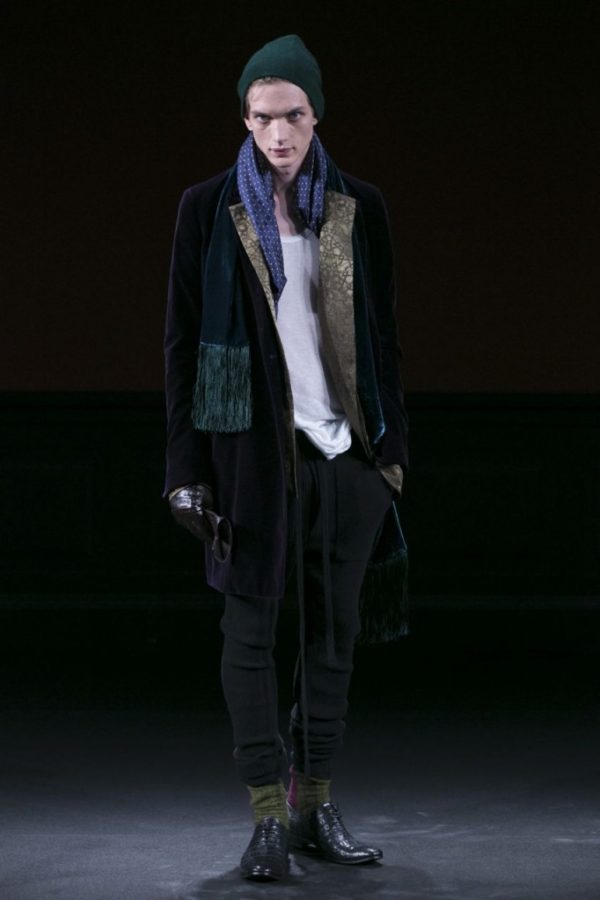 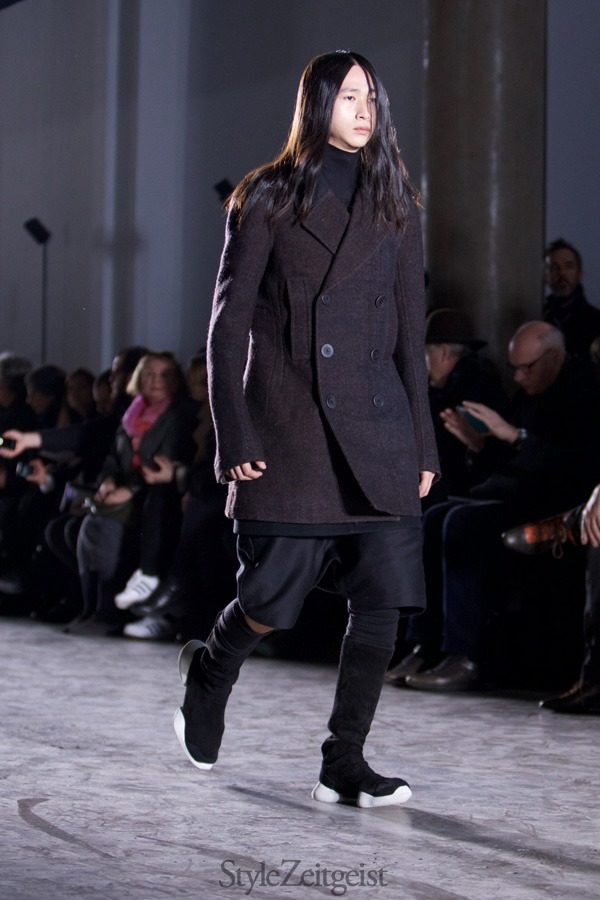 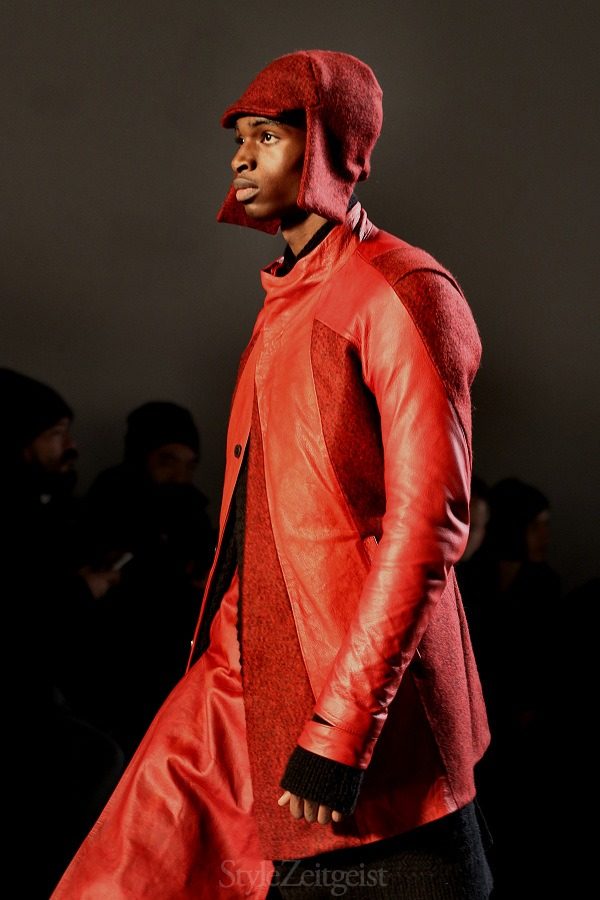 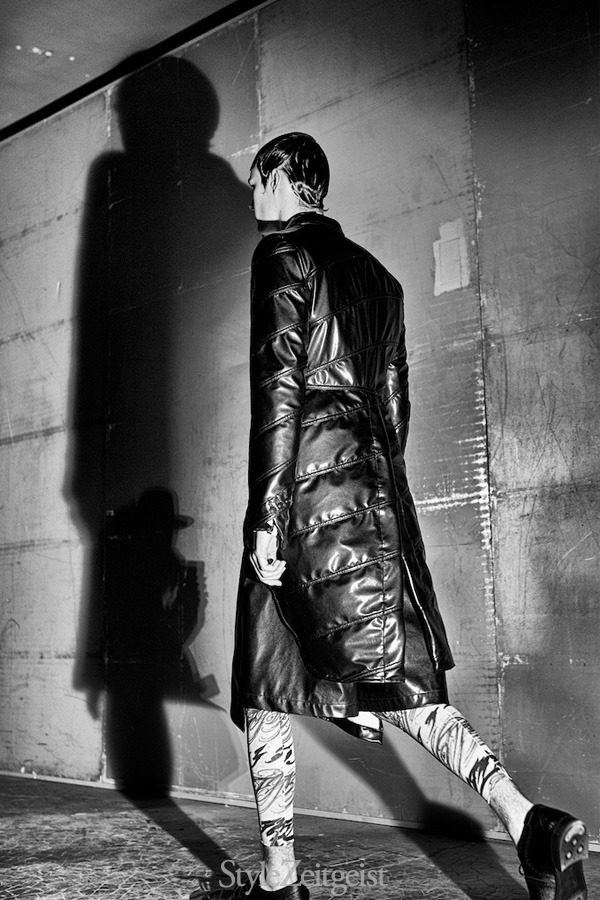 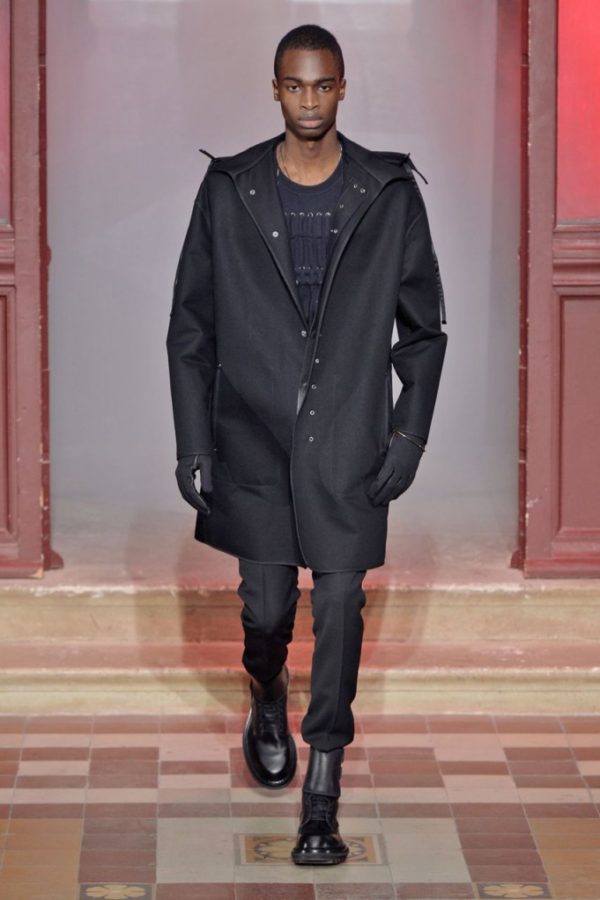 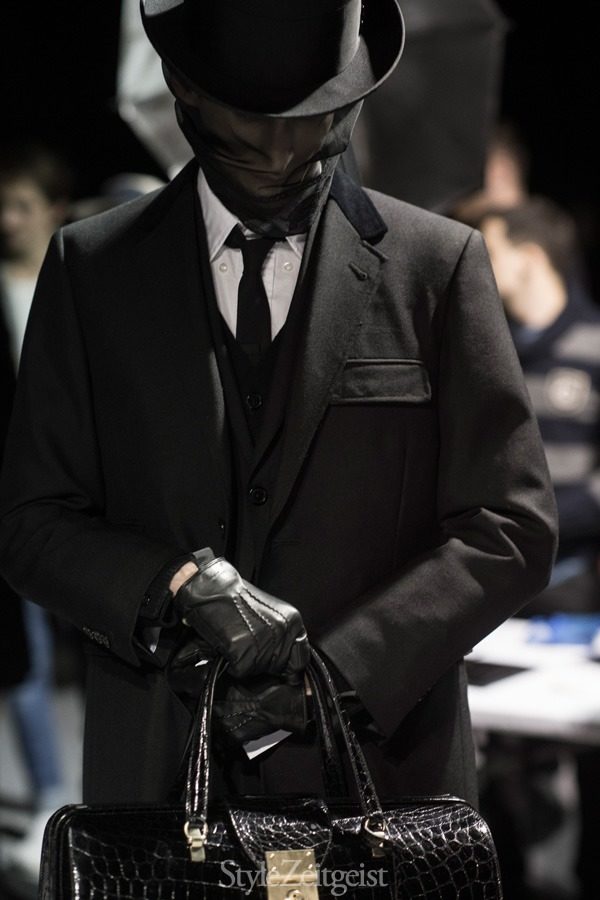 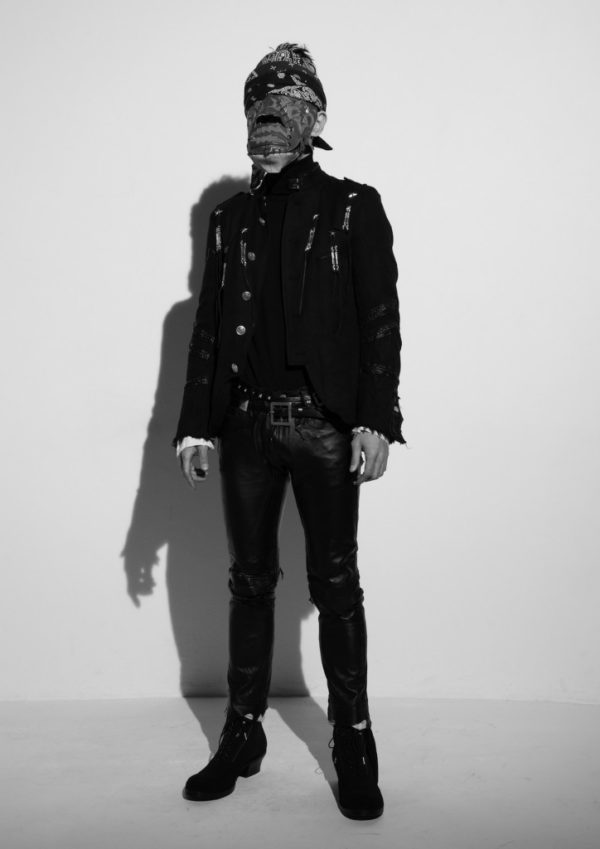 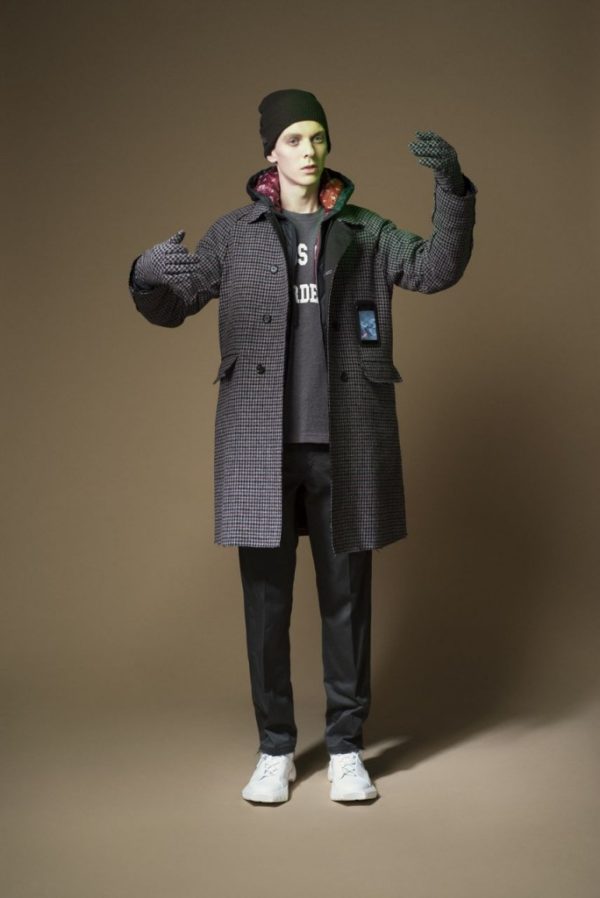 Let me get something out of the way – though my writing is critical more often than not, I don’t particularly enjoy blasting fashion. So, it is with a certain elation I would like to report that this past men’s fashion week in Paris was one of the strongest I’ve seen in a while.

For me it began last Wednesday night when Haider Ackermann presented his most convincing collection yet. Everything seemed to coalesce – from the muted but rich color palette to lush fabrics to nonchalant styling. It was presented at the Galleria museum, and the presentation and the clothes were just the right shade of decadence, a fantasy world of the rich and idle whose saving grace is impeccable education and impeccable manners.

My dandyism is of a different sort, but I don’t mind watching from the sidelines, and Oscar Wilde is not only a favorite writer, but also a favorite personage. Love it or hate it, Ackermann has a vision, and that a talented designer makes.

And something else – when we walked into that luxurious, red-carpeted hall, the models were standing in half-light. To the dismay of the audience, they could not snap pictures for their Instagrams. Their narcissism unsatisfied, the editors grumbled. But I thought this was clever.

The problem with Instagram is not that it allows you to share information, but that it’s an enabler for unbounded narcissism. The only Instagram filter that really matters is the “me” filter. It is not so much what you document but that it’s you who documents it.

If you have ever taken pictures at a fashion show, as I have for this magazine, you know that you are not actually SEEING the clothes, as your attention is focused on taking the shot. Ackermann forced you to look at the clothes. The show was his, not yours.

I skipped the Raf Simons show, which again was held god knows where on the outskirts of Paris. Holding shows at increasingly far-flung locations was a leitmotif this season, and I am struggling to understand whether it’s out of necessity or some kind of ego-tripping on the part of designers.

I hope it’s the former, but that does not make it easier on my writing brethren who often had to schlep half an hour each way, wait another twenty minutes, to see a ten minute show. There are few I’d do it for, and one of them is Dries Van Noten, who delivered another winner.

What never ceases to amaze me about Van Noten is not only his level of talent but also of professionalism. He consistently shows collections of forty plus looks, within which variations on the theme never bore. This was evident in the coats lined in quilt, turned inside out for the runway, and the three-piece suits, the third piece being an apron/kilt hybrid. Embroidery was toned down by using only silver thread. And so on.

Oh, yes, but before Van Noten there was Rick Owens, whose show was a dick move. The clothes itself were solid, and in the real world you will probably wear a long top underneath. If his goal was to implant his name into the minds of a new audience, he succeeded, as the likes of CNN, whose viewers are more probably familiar with Terrell Owens, were dutifully appalled to learn a new name. Though I am not sure Owens meant to take his place in the pantheon of collective consciousness of mass taste next to such luminaries as Ralph Lauren and Michael Kors.

When I encountered Michele Lamy a few days later she complained to me that the media did not focus on the clothes. While she had a point, the display of sexual organs, male or female, draws attention. I once saw a woman walking in Union Square with bare breasts. She was probably a member of a movement of women demanding the right to go topless wherever they please. But, believe me, it was not women’s rights I was thinking of when I saw her.

Speaking of great clothes without scandalous context, there was the outstanding Boris Bidjan Saberi show. He introduced a rich red, a cool gray, and new silhouettes. He mined his aesthetic deeper and he continuously pushes himself. The line is now grown up, and the messiness of dangling strings and excessive draping are thankfully behind him.

In my world it used to be the trio of Owens, Saberi, and the Japanese brand Julius that have conveyed a hard, industrial image. Increasingly, as Owens is becoming more feminine and Julius slicker, Saberi is taking possession of the hard-hitting niche.

At Ann Demeulemeester, Sebastian Meunier is getting more comfortable in the leading role with each season. “I have big shoes to fill,” he told me backstage. Indeed. But he did well, keeping Demeulemeester’s ethos largely intact but giving his own creativity liberal space, a tricky balance.

If the Comme des Garcons show looked strange to you, you should not be surprised. Kawakubo’s garments have to be examined carefully. One of the themes was spiral construction. Many of the blazers were made from one piece of fabric cut on the bias and continuously stitched without any side seams – a highly complicated feat of patternmaking.

What you also did not see, if you were only treated to front shots on the Internet, were the sinister prints by the South African artist Roger Ballen on the backs of white pleather biker jackets.

On the way to the Lanvin show Sunday I crossed Pont des Arts, which was groaning under the weight of love locks. It was ugly, made uglier by plywood boards that Parisian authorities installed to prevent further declarations of love (wouldn’t it be fun if when breaking up you were required to go back, cut the lock open and sink the lock into the Seine?). I thought about how tourists spoil everything, which led me to another kind of tourism.

Since street style photographers made some fashionistas into stars, a horde of fashion tourists has descended onto show venues. These are mostly children of rich parents with no particular occupation, outlandishly dressed, often without show invitations, who parade in front of show venues in hope of being photographed.

I witnessed some people slowly smoking cigarettes or fake-talking on their phones – anything that allowed them to conspicuously linger. It’s getting so bad that some photographers have made ban lists and will not photograph the worst offenders.

But if this fashion spectacle was not to my liking, the one put on by Thom Browne was. It began with a performance piece. The set was a white three-room apartment. A man in a white suit woke up, got up from his bed, walked to another room, had his morning coffee, walked to another room with a table and a typewriter. Lacking inspiration – not one keystroke, a writer’s hell – he changed into a black suit, turned his apartment black by pulling down fabric panels, got into his bed… and died. Finita la commedia.

What followed was a funeral procession of men dressed in black tailoring of all kinds of proportions, from the most classic to the most unorthodox. Black snow fell from the ceiling as each of them stopped briefly in front of the deceased to pay his respects. The show was again cerebral, with elements that wouldn’t quite match (what was a cute turtle-shaped bag doing at a funeral?). “It’s good to make people think,” Browne told me when I saw him the next day.

Besides shows, I’ve visited quite a few showrooms. I am happy to report that Takahiro Miyashita’s new(ish) brand, TheSoloist, is making a push for a wider market. The brand shared a showroom with Undercover, since both designers are friends.

TheSoloist collection was beautiful but difficult. It referenced Westerns and the military and though the palette was black and white, it relied heavily on embellishment. It was, as usual, meticulously crafted, with a lot of handwork, but it’s hard to imagine much of it will make its way into the closets beyond those of the die-hard devotees. And while there were more palatable pieces, a store that will buy solely into those will miss the essence of the collection.

The Undercover collection was more accessible, but as with past several seasons the creative energy that continues to imbue Takahashi’s womenswear is largely missing from his menswear offerings. They used to be more hard-edged and daring. As usual, there were clever details that only a meticulous mind like Takahashi’s could conjure, but they were not enough to carry the collection as a whole.

One neat thing – as a sign of friendship, both Takahashi and Miyashita made t-shirts with “NO (B)ORDERS” written on them. I hope this continues to be their motto.

From the smaller brands the work of Lumen et Umbra and Forme d’Expression stood out. The latter particularly should be lauded for not cutting corners in terms of fabrics and construction methods, when so many other designers do.

I also liked Thamanyah’s modern take on the traditional Bedouin dressing, done in luxurious Italian and English fabrics. The garments were voluminous, but the heavy fabrics made them drop just so.

Many of the designers I follow have abandoned the heart of Marais for its outskirts, because it’s been taken over by fake-goth brands. It’s disheartening, but I’ve ranted about it enough and won’t bore you further. Instead, rejoice in the fact that it’s time to start saving in time for the next winter.