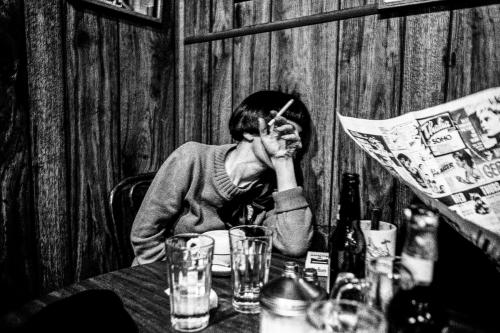 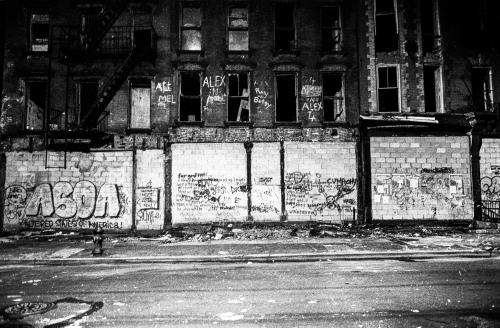 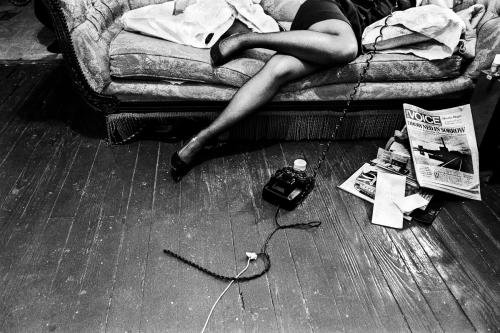 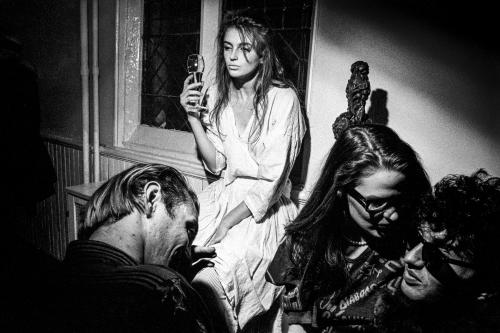 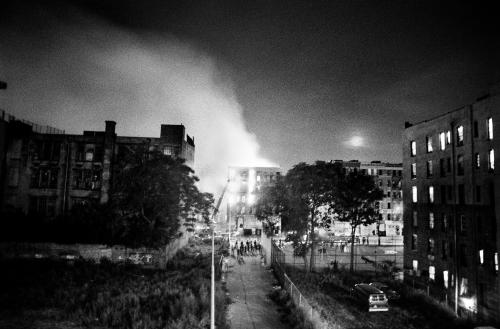 Coffee and cigarettes and newspapers – just part of the atmosphere back then, no more noteworthy than the air Schles breathed, but their prevalence strewn here and there indoors throughout Schles’ photographs was arresting.  You’d have to photoshop in cellphones and iPads for the newspapers today.  Indoor smoking has long been outlawed.

The streets and skies look darker then.  It could just be the saturated blacks but it seems that way.  Less streetlights per block (at least those blocks).  Less light pollution.

Schles’ photographs capture “downtown” New York at a time when that term was coming to be loaded with meaning.  The styles, looks, ideas, and the feel associated with the eighties is not really here: the young people photographed, their clothes, hairstyles, the drinks in their hands are somehow… not what you’d expect.  They almost look “classic.”

This is all to say that though Schles has titled his photographs so that we know what is going on in them, and photographed in legible, stark black and white, and from an intimate point of view, all in a milieu that (we think) we know, even with all that going in our favor, the photographs have a literary feel.  There are stories here, despite the street photographer shooting.  You can stare at the young girl in Limelight as she looks somewhere off the edge of the frame, half-lidded, her glass held aloft.  And stare.

Part of this may be a contemporary accident in that the show is actually comprised of two bodies of work.  One is Invisible City, the photographs that comprised Schles’ classic, out of print book of the same name (recently republished by Steidl, they smell of ink and are beautifully done).  The other body of work is Night Walk, which is comprised of film and prints of the same era that Schles revisited in working on the Steidl project.  Those photos comprise a new book and are interspersed on the gallery walls with the Invisible City work.  Taking the time to parse out to the two bodies in a sense divides up as a nastier downtown (Invisible City) and a sweeter though no less gritty vision.

The quotation from T.S. Eliot that opens Schles’ website (and is also quoted in his photobook Invisible City, if memory serves) aptly describes the vibratory tension in his (and perhaps all) strong photographs:

“Every experience is a paradox in that it means to be absolute, and yet is relative: in that it somehow always goes beyond itself and yet never escapes itself.”