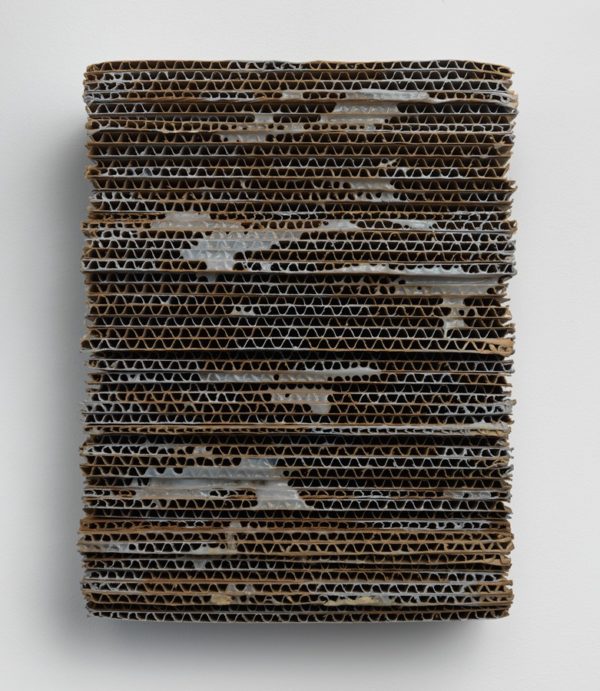 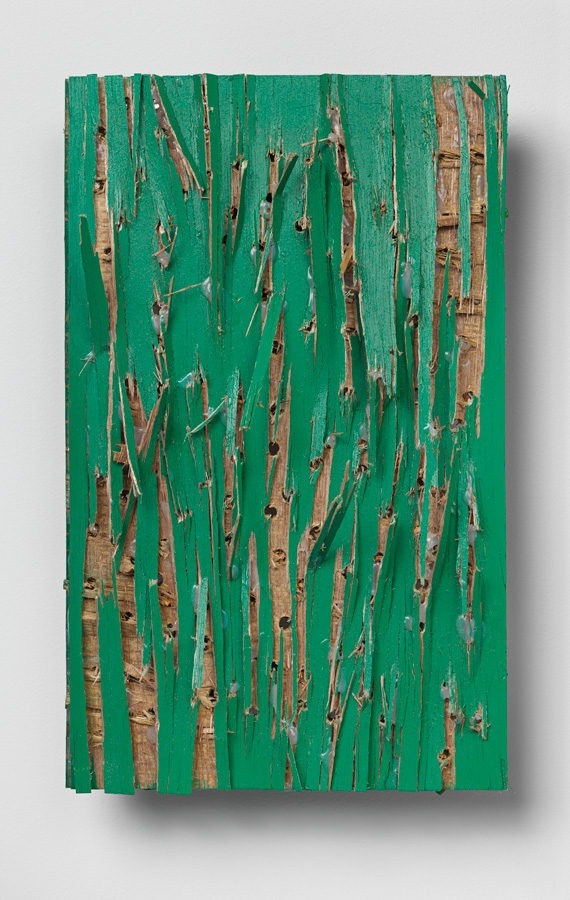 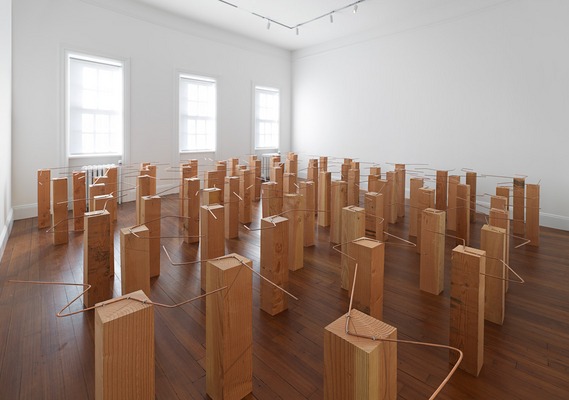 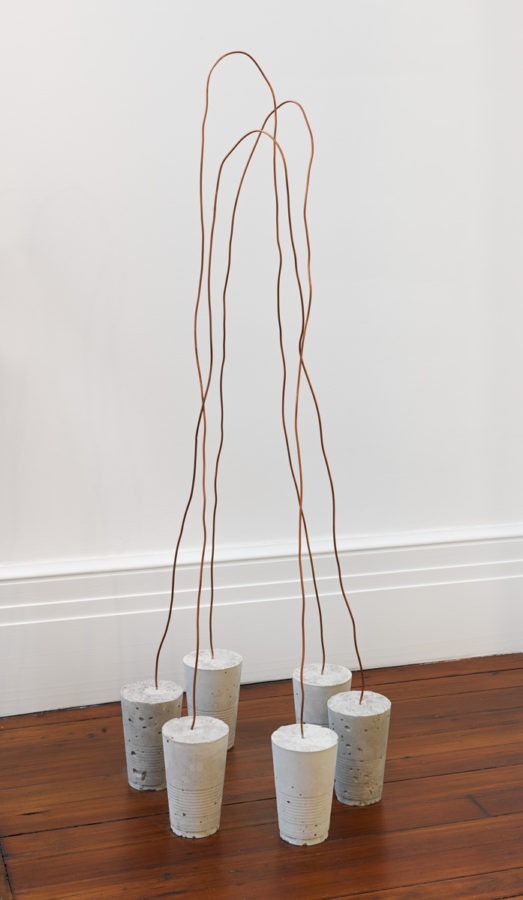 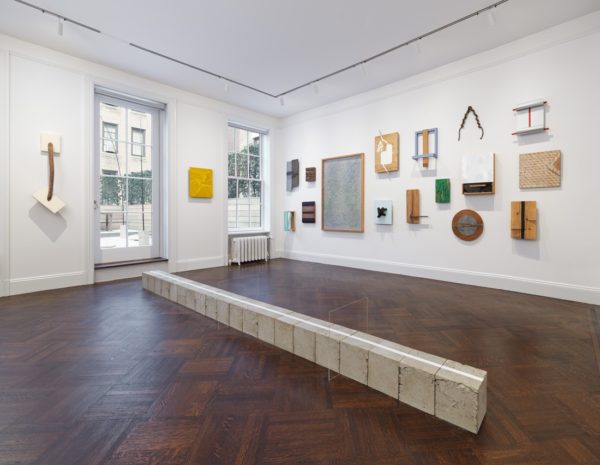 The Upper East Side outpost of L.A.’s Blum & Poe gallery takes up the top floors of an unprepossessing brownstone and is easy to miss. That said, you will most likely have the place to yourself, which is a special way to get to walk through the first New York solo show of Kishio Suga that takes up the gallery, including its courtyard-facing terrace.

Suga is one of the towering members of the loosely knit Japanese movement formed in Japan in the early 1970s that came to be called Mono-ha, literally School of Things. Like most art movement labels, the term was originally used as a put down but has come to stick and is apt.

One of the pleasures of this show is how responsive – adaptive, really – Suga’s works are to what were originally domestic spaces.   Two rooms are taken over with single installations (one to the gills). Another room contains a large concrete floor sculpture and nearly thirty small “paintings.”

The terrace off of that room showcases an installation of thick arching wires that rise from concrete bases and back down where they are pinned by stones at their other end (they have the scary tension of deep-sea fishing rods). Even the hallway and landings have been brought into the act to great effect with small sculptural assemblages (one of my favorites, Scenery of Space, 2010, wire, concrete) and “paintings.”

The scare-quotes are deliberately used, as a Suga painting can be comprised of many things and/or acts. The gallery terms them wall-mounted assemblages: “One room is dedicated to Suga’s wall-mounted assemblages, spanning the early 1970s to 2014. Made of all kinds of materials, these works reveal the spontaneous and intuitive character of Suga’s practice. The artist has variously tied, bound, stacked, cut, glued, painted, taped, wedged, leaned, peeled, nailed, carved, bent, and folded these materials into their current forms.”

Of the single-work rooms, those installations set forth Suga’s abiding interest in charging up the interrelations of things – the room, the material, the acts the material underwent, physical forces acting upon the material thereafter and the viewer: “horizontal and vertical tension, weight, and gravity,” as the gallery nicely put it.

As concrete, real, and intensely specific as Suga’s works, large or small, are, they are fascinatingly squirrely.Their point constantly shifts under interrogation.

Is it the materiality that is the focus? Suga’s works are remarkably legible in disclosing how they were made (for example, concrete molded in plastic cups with a wire arching from one concrete base to the other).

Or is it how they activate and make you aware of space? Multiple Latencies in Formation fills up the small room such that you cannot get much further than the threshold of the door and have to get on tiptoe to get a better angle.

Is it the concept that matters?

It is all and none of this.

In an essay Suga penned for his Works 1970-1978 Tomio Koyama gallery catalogue he starts off by saying, “Making things (artworks) appear entails a series of tasks. These tasks involve bodily movement. It may be possible to make things inside the head, but in most cases I perform labor to bring things into being in a way that can be seen with the eye. Sometimes it takes a long time and sometimes it takes a short time to complete these tasks…”

Some pages later, the essay concludes.

“At first, I spoke of events and my own acts, but now, after further thought I have come to call what I do ‘activation.’ This is because I am attempting to effectively express a relationship with living conditions of reality.”

All images courtesy of the artist and Blum & Poe.  Photography by Genevieve Hanson.