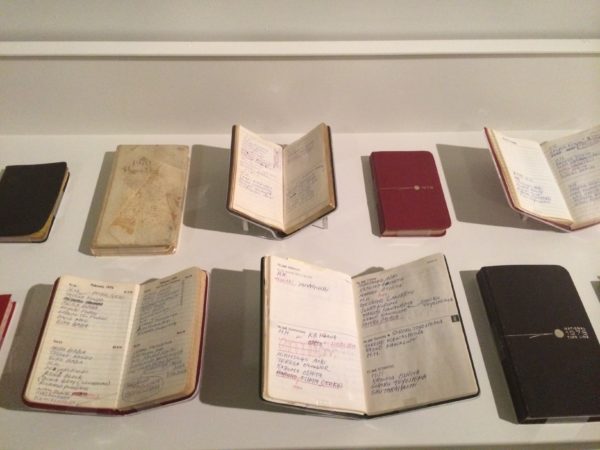 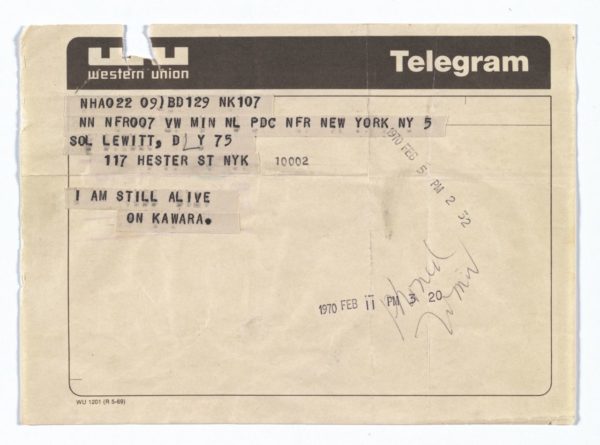 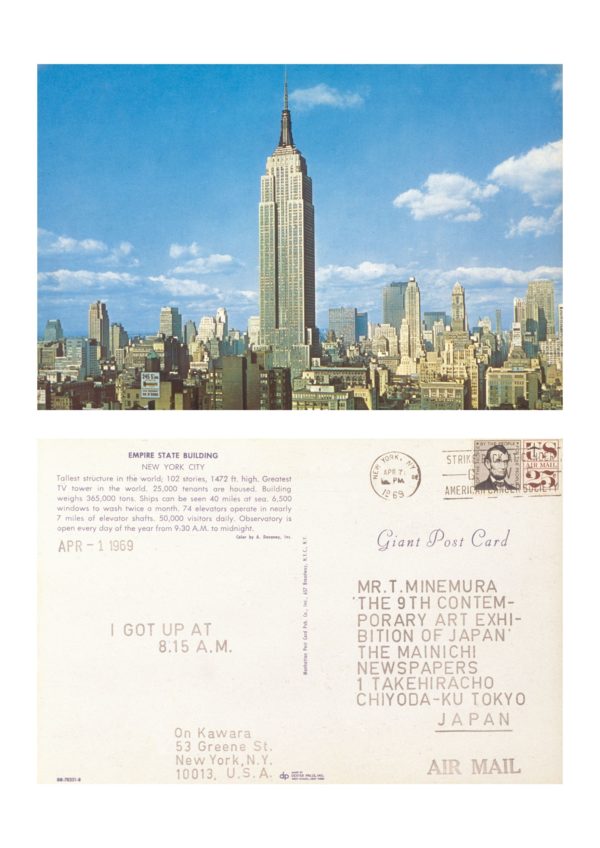 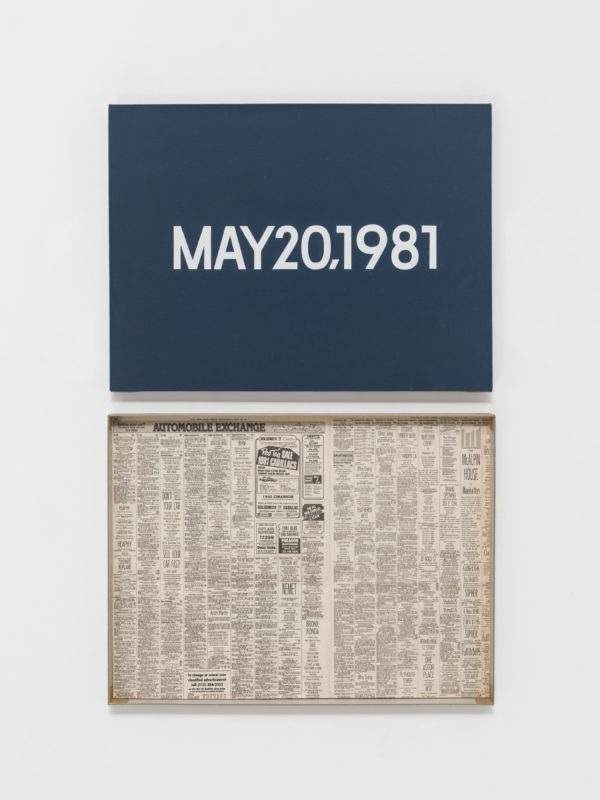 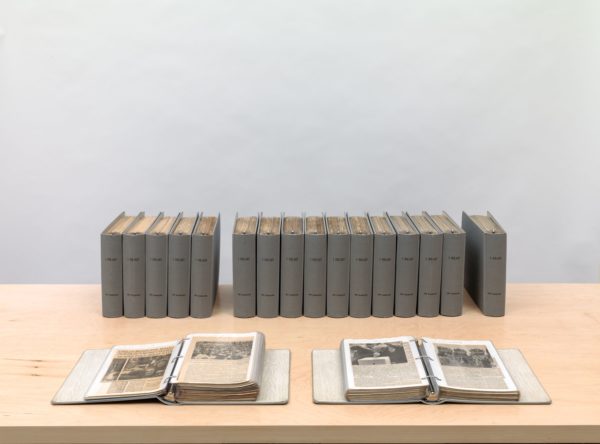 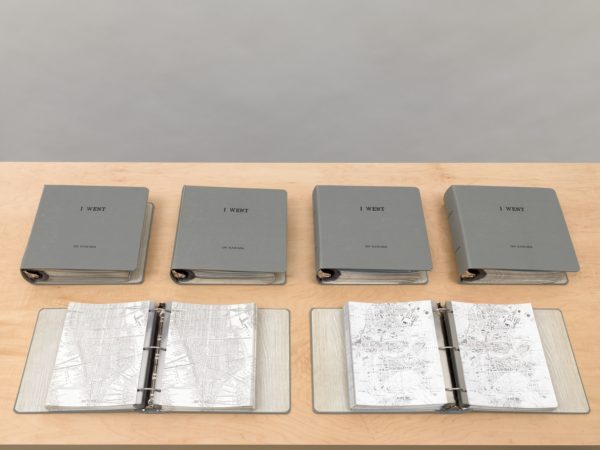 But the thing is, by the time you hit the top of the ramp, you too may find yourself marveling at the achievement that is this exhibition.

Kawara’s calm yet obsessive marking of time – his artistic subject as it were – in grids, rectangular canvases, typed lists, bound volumes and cardboard boxes has been beautifully installed and works perfectly on the Guggenheim’s notorious spiral ramp.  The peripheral glimpses caught of the artwork marching up the spiral provide the visual sense of time on the move.

Kawara belongs to that group of artists whose work needs to be experienced in mass to be felt full force (I put Nobuyoshi Araki, among others, in this category): only then does the physical relentless of the project become apparent and becomes more than conceptual or post-minimal conceit.  To have seen a single Date Painting is in a way to have seen them all but gotten none.

The complete series are on view:

telegrams (the I Am Still Alive series);

stamped tourist postcards (the I Got Up series);

city maps marked with the route taken by the artist on a given day (the I Went series); l

lists of names of people encountered that day (the I Met series);

newspaper cuttings (the I Read series);

a complete inventory of paintings (the Journals);

and vast calendars (One Hundred Years and One Million Years).

The museum, “As part of the One Million Years project,” will present“a continuous live recitation of dates from an immense ledger will occur three days a week during the run of the exhibition on the ground floor of the Guggenheim rotunda.”  That project and a touching piece involving kindergarten classrooms are the two pieces Kawara envisioned continuing beyond his death.

I like the just-the-facts description provided by Dia:Beacon of the Date Paintings.  It gives a sense of what Kawara was up to:

On Kawara is interested in time—its measurement in days, years, centuries, and eons. Each Date Painting in his Today series, the magnum opus that he began in 1966, is a monochrome field on which is written the date the painting was executed, in the language and according to the calendar of the country where Kawara was at the time. If he does not complete a painting by midnight, he destroys it. Some days he makes two paintings; very occasionally, he makes three; but most days he makes none.

Every painting in the series conforms to one of eight sizes, all horizontal in orientation, ranging from eight by ten inches to sixty-one by eighty-nine inches. For every painting the artist mixes the paint afresh, so that the color of each is unique. Tonalities in the brown-gray and blue-black range have dominated the last decades. Four or five coats of acrylic are evenly applied to the canvas, creating a dense matte surface. Letters, numbers, and punctuation marks are then built up by hand, rather than with the aid of stencils. Initially he used an elongated Gill Sans typeface, later a quintessentially modernist Futura. Variations in the letters or hues are of no symbolic significance, nor is the choice of a work’s color more connotative than its measurements.

Each painting is stored in a handmade cardboard box with a clipping from a newspaper published in the same city and on the same day that the painting was made. (Kawara has exhibited the works both with and without their boxes.) [The Guggenheim has many].  History as recorded in daily events, whether global or local, is bound together with a residue of individual activity… A constant traveler, Kawara has created Date Paintings in over 112 cities worldwide, in a project that will end only with his death.

Time is often thought of as the rate of change in things.  Here, it is also the small, daily accretions, the repetitions, the barely-there variation in daily routine, and the quiet, at times breathtaking, pronouncements comprised of simple action verbs: I got up; I went; I met; I read… I Am Still Alive.

Kawara’s official biography maintained on the David Zwirner website read, as of On Kawara’s passing: