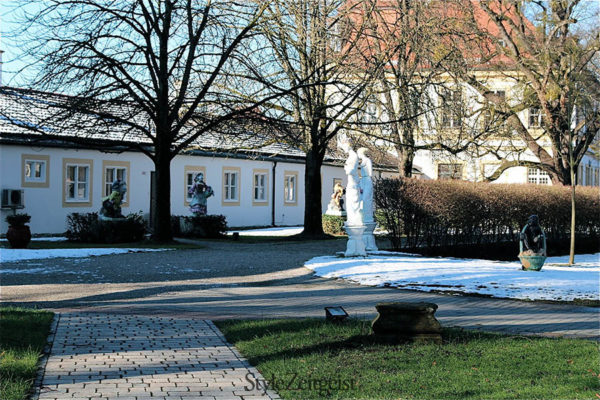 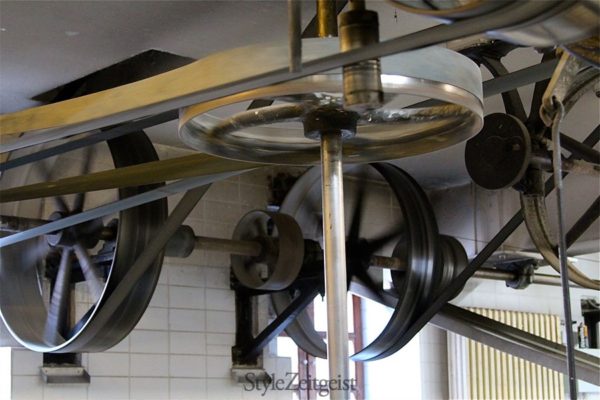 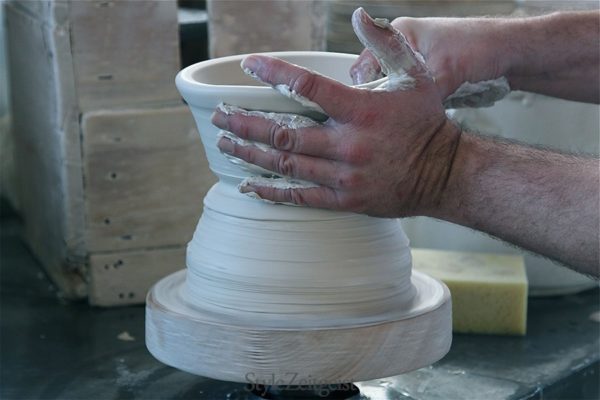 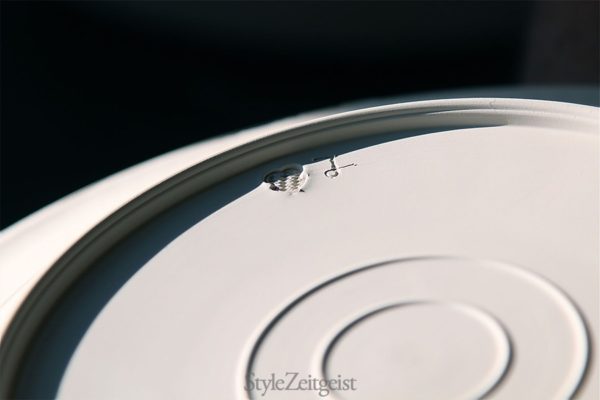 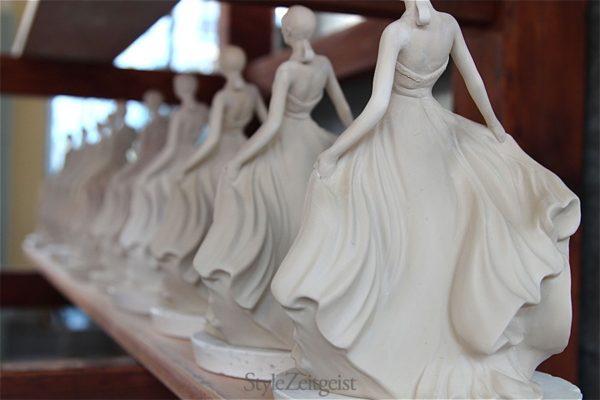 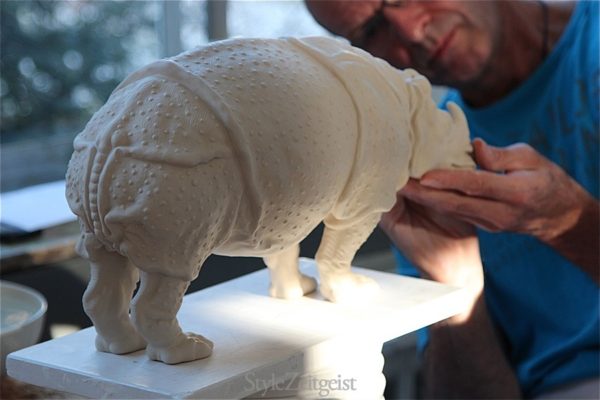 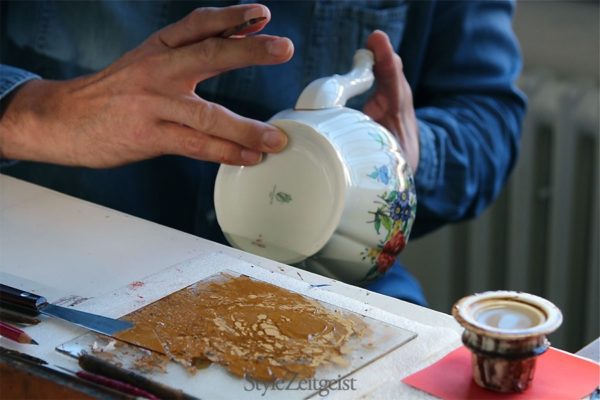 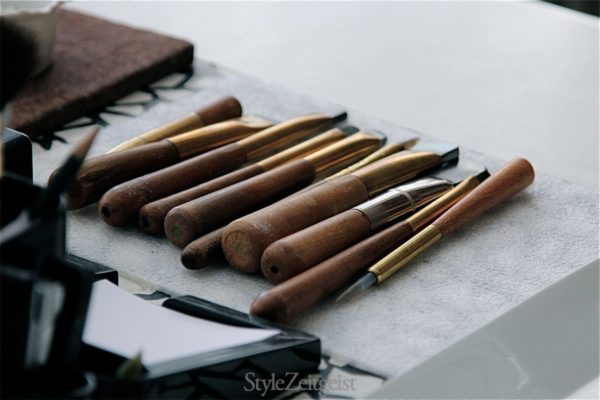 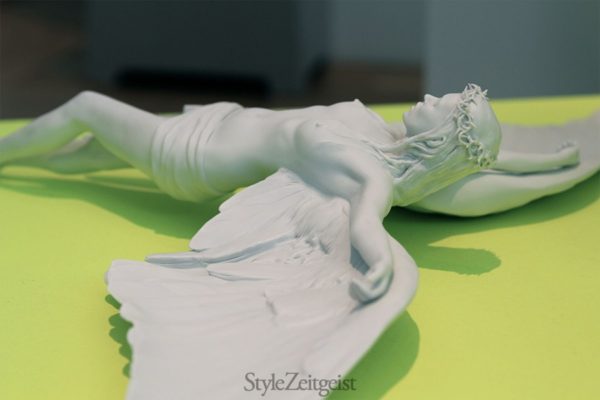 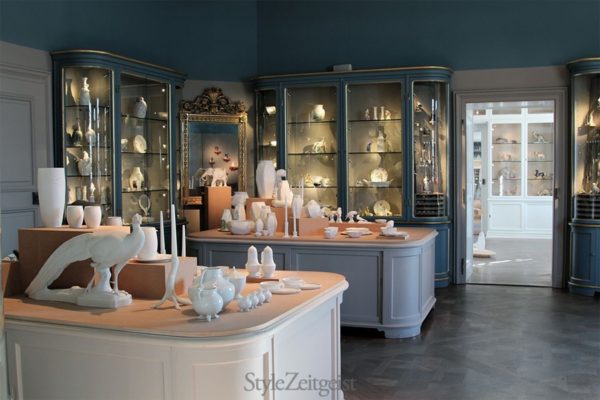 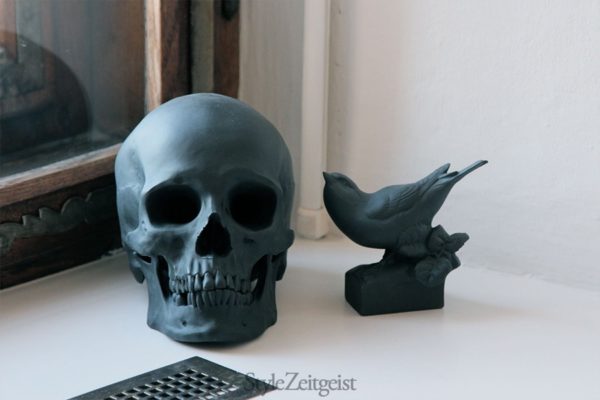 Every single object that comes out of Nymphenburg is made, finished, painted, and polished entirely by hand. In the world that’s groaning under the weight of mass production and consumption and where people are increasingly turning to products made with care, these methods take on new significance.

I found out about Nymphenburg by chance from the fashion journalist Tim Blanks when we ended up together in Antwerp at the shop Graanmarkt13, where Blanks bought a rhinoceros statuette by Nymphenburg.

Sensing my doubt at the wisdom of his purchasing decision (we had wine at dinner), he advised me to do some research. Almost a year later, after my initial skepticism was replaced by a quiet obsession, I found myself on a private tour of the Nymphenburg atelier.

Though the atelier is now supplied with electricity, all of its machines are still operated by waterpower from a fast-flowing stream that cuts across the atelier’s grounds, just like they were in 1747. Inside a building where the raw porcelain mixture is made and stored a system of belts and wheels was whirring nonstop.

All of Nymphenburg’s porcelain mixture is created by one man, a process takes thirty-two hours for each batch. The mixing of kaolin, feldspar and quartz has to be done with a jeweler’s precision (pretty much like everything else at Nymphenburg), because slight variations in mixture will produce defects.

The mixture is then stored for two years in a cool cellar, aged like wine to achieve the desired fineness, and only then it can be used to make porcelain. The cellar holds up to twenty tons of raw mixture, including the liquid porcelain that’s used for figurines.

The aged mixture then goes to the potter’s shop, where four artisans make the plates using the potter’s wheel.

I stood by one, named Josef, as he performed his magic. He put a plate mold on the wheel, then slapped some shapeless porcelain mixture on it, and then proceeded to shape it into a plate with alchemic skill. He thinned the base of the plate with a tool that allows him to make porcelain down to a thinness of 2 mm, and stamped it with the crown of Bavaria seal.

Each of the four artisans can produce a maximum of twenty plates a day. After the initial shaping, the plates dry for a day. Josef took down a dry plate and with a flick of a scalpel signed the plate with his initial, the way he does every single product shaped by his hand.

Scalpels are also used to cut out details in some products. There is no room for error in the shaper’s work, because porcelain is mnemonic material, which means that if you made a mistake and corrected it so it’s invisible in the raw product it will still show up after porcelain is baked.

After the initial round of baking the products go to the painter’s and detailing shop. Each and every piece of Nymphenburg porcelain that is painted, is painted by hand.

One time the atelier received an order for two hundred pieces from its intricately ornamented Cumberland line. It took three artisans ten months to do the painting.

After the products are painted they go back to the foundry where they are fired again. It takes up to eight passes for some products to be finished in the right away. Then they go to the polishing shop, which currently employs exactly one polisher (the second one retired last year and had not yet been replaced).

The polisher was a pleasant middle-aged lady with a jeweler’s eyepiece and her twenty polishing tools that wouldn’t look out of place in a jeweler’s shop. It takes a long time to paint one plate; it takes three times as long to polish it.

Though many of Nymphenburg’s offerings look traditional, with its glaze and elaborate ornate painting, the company is very well aware that we live in the modern world and that its esthetic needs to reflect that. After all, the world is full of mass-produced porcelain kitsch.

Nymphenburg maintains its edge by collaborating with product designers such as Ted Muehling and Ruth Gurvich. In its artists’ series, they also have done collaborations with artists Kiki Smith and Terence Koh, and fashion designers Karl Lagerfeld and Gareth Pugh.

Nymphenburg maintains a private room behind the shop where some of the artist series products are kept, its highlight being the porcelain Kate Moss with angel wings, a product of collaboration with the photographer Nick Knight.

The modern approach also extends to its regular products, like the Biscuit series of animal figurines, which are made of unglazed, matte, pure white or black porcelain (yes, black porcelain – they are not dyed). Though most of these were designed between 1908 and 1936 they do not look dated.

I exited through the gift shop, not minding it in the least. My visit raised many questions, about what we lose as places like this become increasingly rare, as craftsmanship continuously gives way to mass production and as slowness is replaced by quickness.

We are conditioned by the likes of Ikea and H&M to consume like mad, to create a throwaway culture. We want more and we want it cheap. What used to be normal prices are now luxury prices. We pay five dollars for a cappuccino and fifteen dollars for a pair of jeans without pausing to ask why. It’s normal. Only it’s not.

At the Nymphenburg shop I bought a figurine of a black raven. It reminded me of the Edgar Allan Poe poem by the same name. It cost 390 euros – not an insignificant sum for me – but I knew what went into making it, the care, the artisan’s pride, the painstaking labor. I hope to leave it to my daughter one day.
______________
All images by Eugene Rabkin and may not be reproduced without expressed permission.

Let the Death of Experiential Shopping Be Its Rebirth
Apr 29, 2022
Go to Top