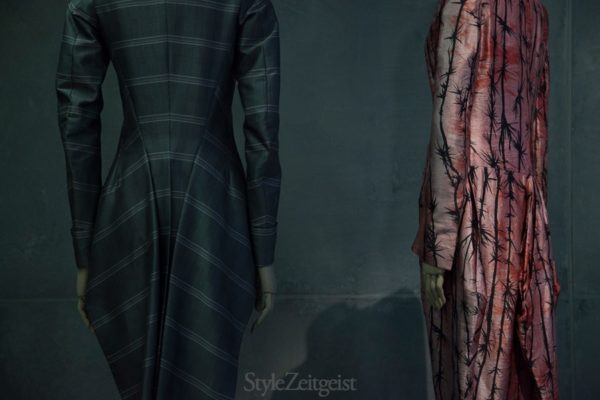 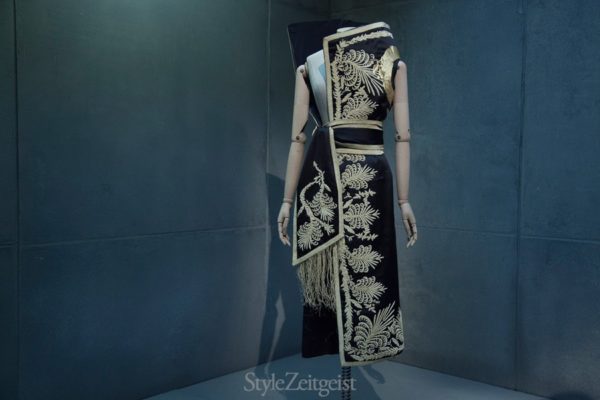 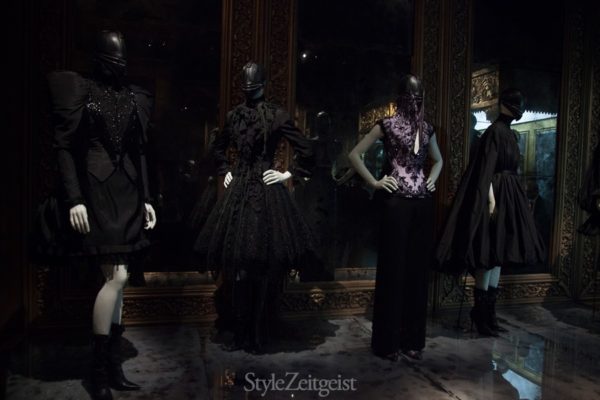 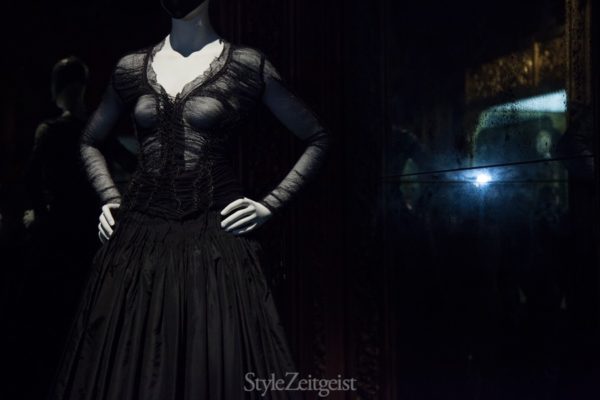 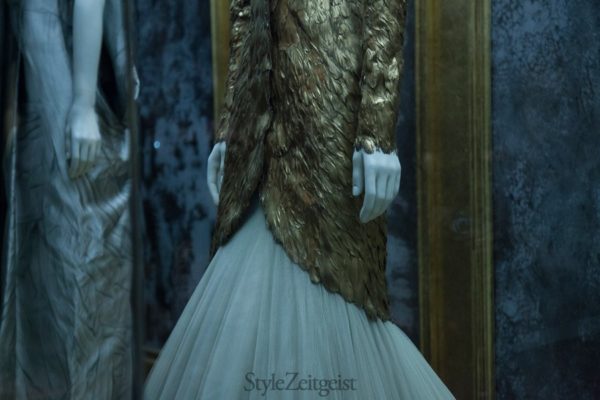 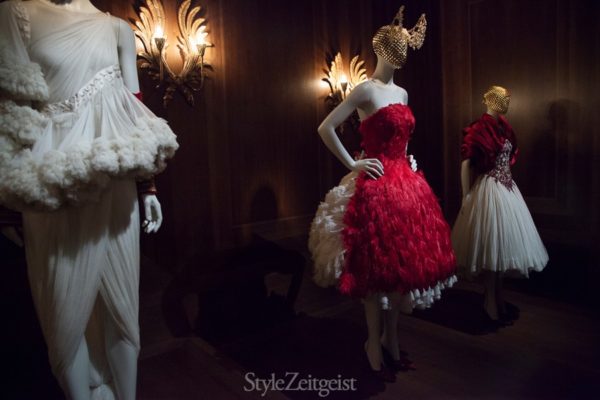 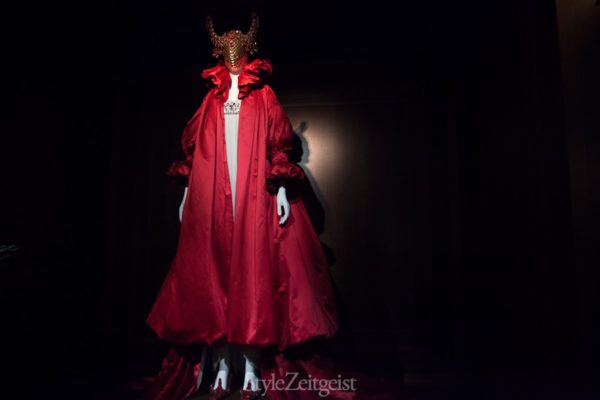 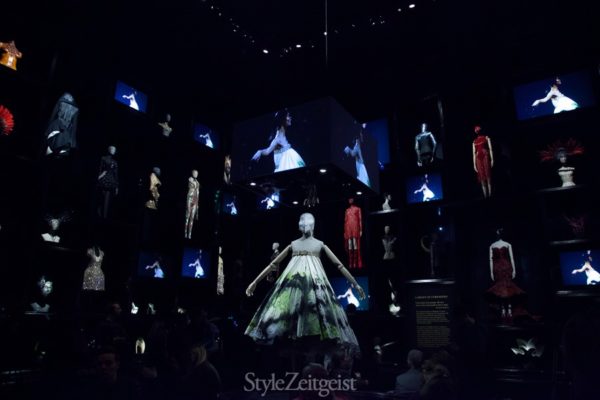 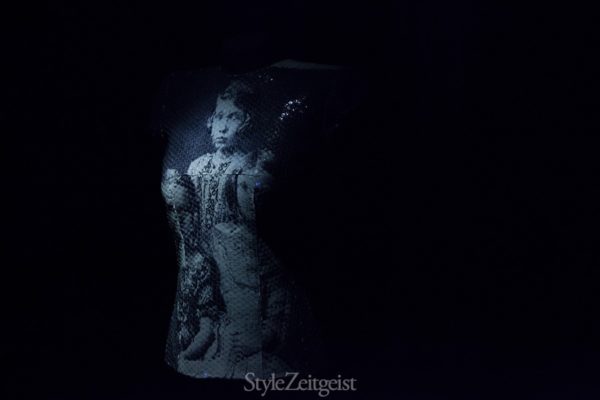 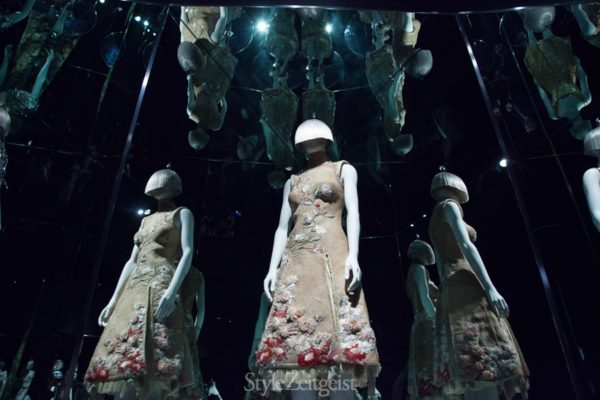 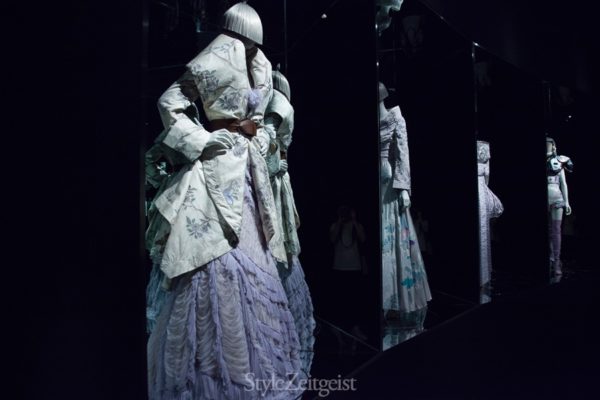 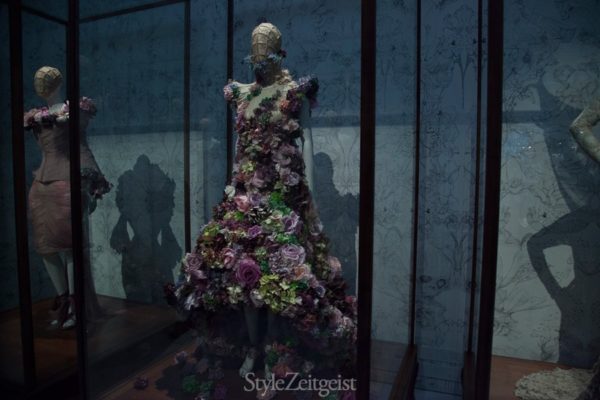 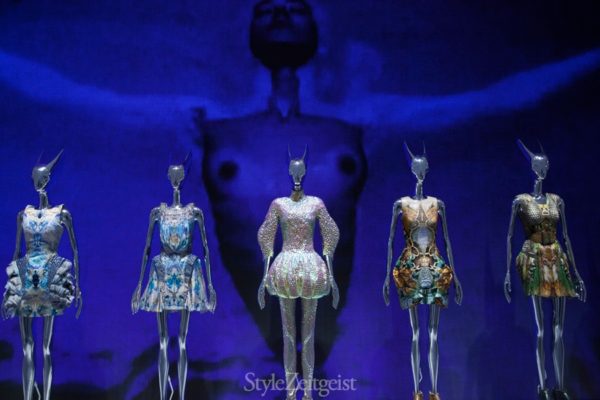 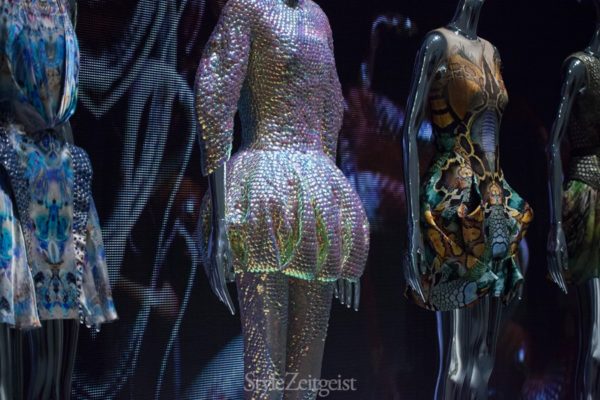 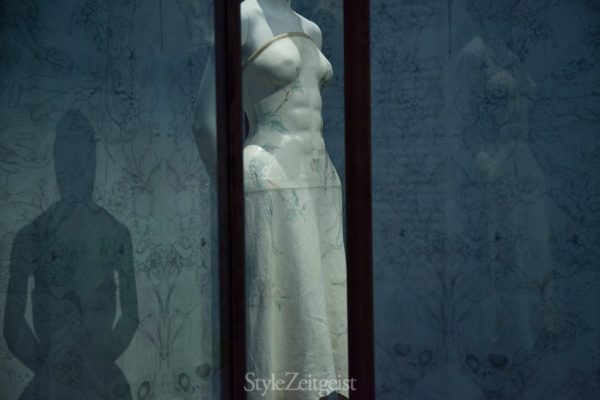 “How many times have you been here?” is the question people ask when they run into acquaintances at the Savage Beauty exhibition in London’s V&A. I encountered three within the course of one hour: A., an editor of a Russian fashion magazine, E., a researcher who has worked on the show, and M., an owner of a British menswear label – and they all asked me the same thing. Less than two weeks after the exhibition opening, the V&A had to order a reprint of the accompanying catalogue (which retails at £35), which has nearly sold out. Rumor has it that the museum will soon stop issuing tickets for the show as it’s booked months ahead – there are certainly no slots available for the entire month of April. Queues of lucky ticket-holders are winding around the V&A’s columns and staircases, waiting to be admitted.

The original show in New York’s Metropolitan Museum of Art four years ago caused a similar furor. It opened just a year after McQueen’s death, so the pain and shock of the loss were still fresh for many, and the news value of the show was sky-high. Seeing the queues in the V&A, it is clear that in 2015 it still resonates with an awful lot of people. Many of them, judging by their looks, have no connection to and very little interest in fashion, which means that McQueen’s work must be acknowledged as a broad cultural phenomenon that transcends the boundaries of fashion.

The four years that have passed between the exhibitions also appear to have made acquisitions easier for the curators. E., who has worked on the London show, tells me that some of McQueen’s close associates and friends, who did not want to have anything to do with the exhibition back in 2011 because they were still grieving, subsequently agreed to lend objects and give interviews for the second incarnation of the show.

Thus over 30 additional garments, including some rare early pieces, are now displayed in the V&A. According to the curator Claire Wilcox, most of them are one-offs that she had to “drag from people’s closets”. Many were made during the early years of McQueen’s career when he was working on a shoestring budget; because of this, they are all cheap fabrics and car paint and “a conservation nightmare”. They constitute a new gallery, called simply London, which has been added to the Met’s original line-up.

It is the first room in the show (not counting the entrance with its mesmerizing video installation, inspired by the designer’s interest in vanitas and memento mori themes) and it features objects from McQueen’s earliest collections, created while he was studying at St. Martins and shortly after graduation.

They are set against a backdrop of polished concrete, reminiscent of London’s brutalist architecture, on mannequins wearing muzzle-like masks, and immersed in a slightly unsettling soundscape of electronic noises and soundbites from McQueen’s interviews, processed in a way that makes them sound somewhat uterine and otherworldly. A giant screen shows footage of his early catwalk shows, in very slow motion and with slight distortions, thus adding to the feeling of suspense. These curatorial interventions reference McQueen’s fascination with horror films, such as Alfred Hitchcock’s Birds.

The layout of some of the following galleries is similar to that in the Met. There is Savage Mind, a gallery that concentrates on McQueen as a tailor; Romantic Gothic – a dark room with stained mirrors and gilded décor displaying designs from collections such as The Horn of Plenty (AW 2009) and Givenchy haute couture AW 1997 to the sound of baroque music; Romantic Primitivism, an even darker crypt-like space incrusted with skulls and bones featuring tribal-inspired designs from collections such as Eshu (AW 2000) and It’s A Jungle Out There (AW 1997), and with a curved screen on the ceiling displaying an underwater film shot by John Maybury for Irere (SS 2003).

The walls in the Romantic Nationalism gallery, home to Macqueen clan tartans from Highland Rape (AW 1995) and Widows of Culloden (AW 2006) collections, are clad with dark wood panels and lit with gilded hanging candelabras – a nod to the ever-so-slight tinges of pastiche in these collections. Other galleries include Romantic Exoticism, Romantic Naturalism, Pepper Ghost – a nearly-life-size replica of the glass pyramid featuring the haunting hologram-like image of Kate Moss from the finale of Widows of Culloden – and a stark white tiled room dedicated to McQueen’s last collection, Plato’s Atlantis (SS2010). Gainsbury and Whiting, the production company that collaborated with the designer in staging his catwalk shows, has been involved in the production of the V&A exhibition.

Nevertheless, A., the magazine editor who has attended pretty much every McQueen show since 1996, complains: “I don’t get the same effect here [as I did at the catwalk shows]. It’s great for design research – it’s amazing to see the cuts, the textures, the prints so close – and it explains a lot about his inspirations, but it doesn’t blow me away in the same way. I would really like to see it in a space like the Grand Palais, somewhere that would reflect the megalomania of his shows… It’s too cozy in here”.

The space is probably not really the issue; rather, perhaps, it is the lack of visceral response created by McQueen’s shows that A. is missing at the V&A. Many people recall that his catwalks were hard to watch. McQueen himself famously said “I don’t want a cocktail party; I’d rather people left my shows and vomited” – a quote that Andrew Bolton, the curator of the Met’s exhibition and consultant curator for the V&A iteration, reflects upon in his essay In Search of the Sublime in the book that accompanies Savage Beauty.

In another essay, Hard Grace, dress scholar Caroline Evans interviews models who walked the catwalk for McQueen; they report physical danger that accompanied wearing some of the pieces: Laura Morgan was told jovially, just before stepping on to the podium in a glass corset: “If you fall, you’re a goner!” – and falling was not out of the realms of possibility, since her skirt was extremely tight; Erin O’Connor, entrusted with the task of ripping her razor-clam dress when walking in the Voss show (SS2001), ended up with blood on her hands; and Rebecca Lowthorpe, who wore a plaster bodice in Banshee (AW1994) could not sit because the garment was very rigid on the hips, and had to lie down while backstage as it was too heavy to stand in. The models’ fear and awe certainly translated to the audience: at the press opening I overheard someone mentioning that she emerged after most of his shows in a state of emotional and physical shock.

Extreme weather conditions, like the hurricane wind in the Scanners (A/W 2003) show, piercing sounds, discomfort, danger and pain: none of this is translated into the V&A show. I wouldn’t go so far as to call it cozy, but it certainly is beautiful, glamorous and immensely likeable, rather than shocking or unsettling.

As curator and dress historian Lou Taylor remarked in her book The Study of Dress History, “the whole range of human experience attached to the wearing of clothes is inevitably lost on the static dummy placed behind glass”. Bodily awareness and visceral responses, as phenomenology teaches us, are closely linked with movement, and this is exactly what is so difficult to achieve in a museum context – especially one with such a classical background and rigorous preservation standards as the V&A.

Savage Beauty is visually superb, but sometimes lacks the involvement of the other senses. Maybe it could be colder. Maybe it could be darker, or noisier (Wilcox mentions constantly urging the sound technicians to turn the sound up), or, well, smellier (she admits, with a embarrassed laugh, that some objects, like a pheasant claw necklace by Shaun Leane, are quite odorous). Maybe the visitors should have been made to wear constricting metal armature frames and walk in water, like Debra Shaw in Bellmer La Poupee (S/S 1997) collection. Or corsets that cut into the body and make movement extremely difficult, like those described by models in Carline Evans’ essay, or dangerously high shoes, like Armadillos from Plato’s Atlantis or chopines from The Horn of Plenty. Or maybe we should have been stalked by menacing robots, like the models in Plato’s Atlantis or the ballerina Shalom Harlow in the famous spray-painting finale of No. 13 (S/S 1999).

And yet Savage Beauty is light years ahead of the majority of “academic” fashion exhibitions that are, as dress historian Christopher Breward once put it, “a book on the wall.” It is definitely the most immersive and experiential show I have ever seen in the V&A – an institution that, like others of its ilk, often puts historical accuracy before the visitor’s affective experience. It may not be as bewildering and disquieting as McQueen’s shows, but it’s certainly stunning and emotional. And the way it has translated research findings into exhibition values through non-verbal mediums – sounds, backdrops, light and so on – is nothing if not admirable.

This becomes particularly obvious in the Cabinet of Curiosities, the only room that achieves a sensory overload similar to that of McQueen’s shows. It’s a double-height gallery displaying objects produced by McQueen in collaboration with other creatives, such as the corset-makers Whitaker Malem and Kees van der Graaf, the jeweler Shaun Leane and the milliner Philip Treacy, interspersed with footage of nearly all McQueen’s catwalk shows and multiple soundtracks.
The space is mesmerizing: eight meters high, with lots of screens and numerous sounds, it is the centerpiece of the show, where one can wander for hours, discovering new details and references.

For instance, one of the sounds in the polyphonic soundscape is the tapping of an old-fashioned typewriter: Wilcox reveals this was her way of referencing the famous scene in Stanley Kubrick’s film The Shining (that, in turn, served as inspiration behind McQueen’s Overlook collection) where Jack Nicholson sits in the Overlook Hotel room typing “All work and no play makes Jack a dull boy”.

For those of us who have not had the privilege to attend McQueen’s shows, Savage Beauty is an unrivalled glimpse of his inquisitive, fantastical, dark and twisted mind. As for those who have had this privilege, the loss of a dynamic creative spirit cannot be replaced by an exhibition, however moving and inventive – just like a real person cannot be replaced by a monument, or a live show by a recording.

M., the designer I run into in the last room, says: “What an immensely inspiring exhibition. It just shows you that everything is possible.” Without realizing it, he is citing a snippet from an interview that is interwoven into the soundscape of the London gallery where McQueen says precisely that: “Everything is possible”. This is certainly the best conclusion one can carry away after attending a museum show.