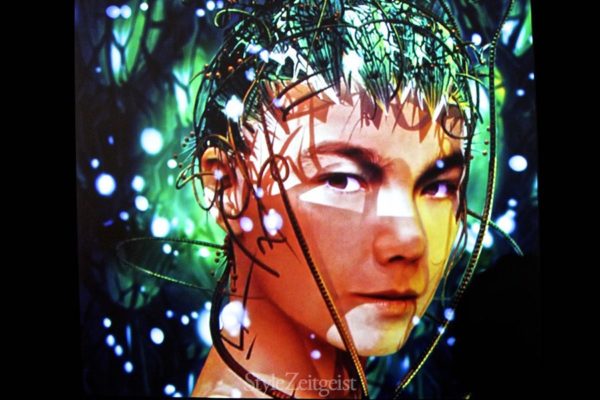 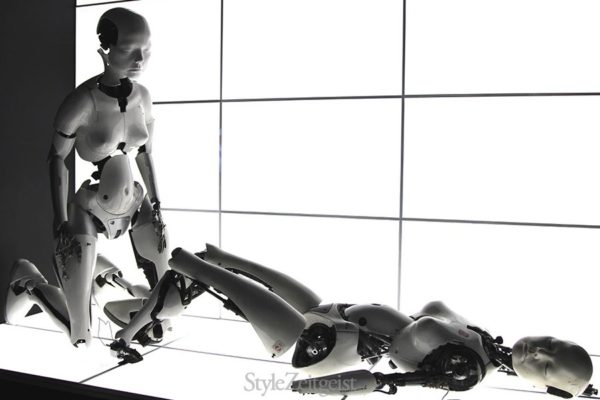 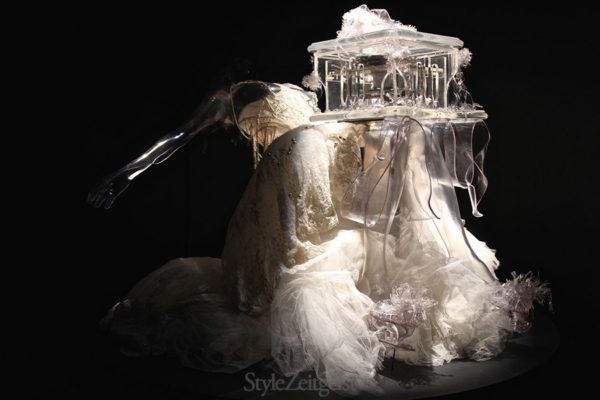 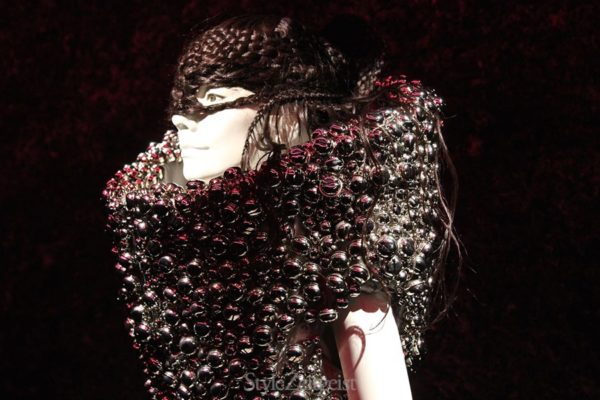 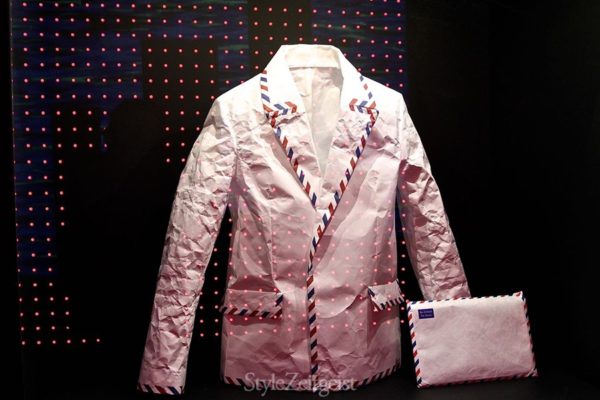 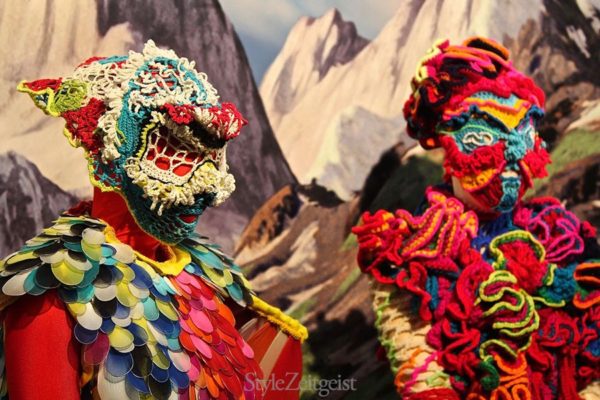 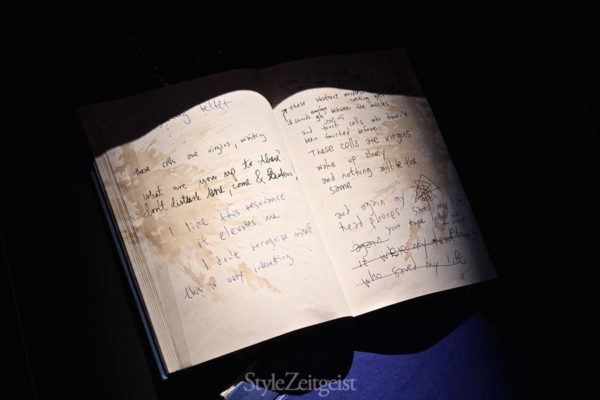 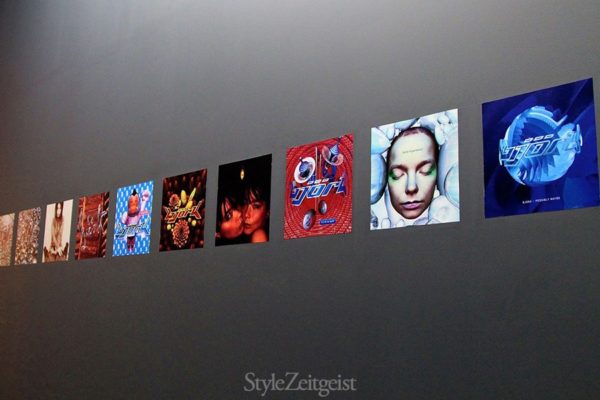 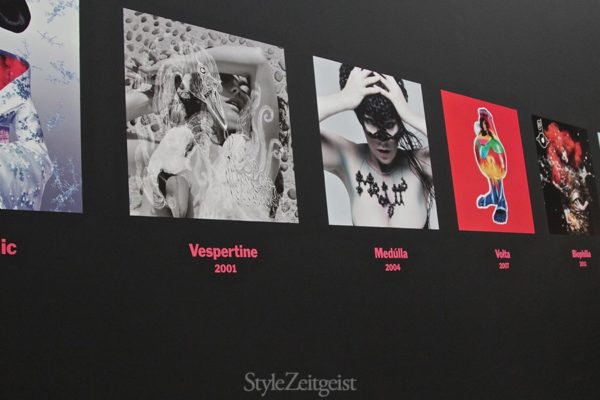 Though I am loath to draw comparisons, this time it is warranted, as I think we are witnessing a birth of the new museum exhibition genre. As museums are beginning to exhaust their fashion fetish, music is the next unchartered territory with enough material to last them a few decades. I’d like to see Madonna at the Met next.

Bowie’s exhibit was expansive. Bjork’s is intimate, perhaps too much so. This is especially evident in the main part of the exhibit, the mazelike pavilion called Songlines with chronologically arranged artifacts from Bjork’s career, which include artwork, notebooks, costumes and video props. Of these the most brilliant are the robots from the 1997 video for “All is Full of Love,” directed by Chris Cunningham.

The costumes are also noteworthy, especially the belled dress by Alexander McQueen, the iconic Airmail post Tyvek jacket by Hussein Chalayan, the Swan dress by Marjan Pejoski (of course), and the plastic dress by Iris van Herpen that Bjork wore for her 2011 Biophilia album.

Songlines comes with an audio-guided tour, which instructs you to linger in the maze for forty minutes. This is quite optimistic, considering that it took most journalists about fifteen minutes to examine the whole thing.

The audio-guide is one of the most misguided things about the exhibit. Unlike the one at the Bowie show whose synchronicity was akin to magic, this one just babbled on. I lost interest about two minutes in. It was supposed to be some fairytale like Bjorkian lore, which I doubt many listeners will take seriously.

Lingering is further complicated by the narrowness of the maze, which will certainly result in grumpy calls to move along. If a hundred or so journalists were feeling cramped, Songlines will certainly be challenging once the exhibit opens to the public.

The above, if you are charitable, can be forgiven as miscalculation of creative nature. What is unforgivable is the poor display of the artifacts – the constricting space does not allow you to properly take in what’s on display, and some things are poorly lit, an unforgivable technical mistake that simply should not be made by a major museum.

And whomever thought that the Bjork-like mannequins were a good idea should perhaps consider a career change. I suppose they were meant to give likeness to form, but they simply freak you out, Chucky style.

Downstairs from Songlines there are two soundproof rooms devoted to Bjork’s videos. Of these the first one plays the video for Black Lake from Bjork’s new album Vulnicura. The ten-minute clip was commissioned by MoMa and directed by Andrew Thomas Huang.

The video was filmed in 2014 in Iceland, a sort of homecoming for Bjork, who has spent a lot of time living and working in the US. In it, the singer, prowls the characteristically phantasmagorical Icelandic landscape in an Iris van Herpen dress. The song is about loss and redemption, as is the entire album, which Bjork wrote in the aftermath of her devastating break-up with her long time partner, the artist Matthew Barney.

Bjork showed up before the screening of the video, wearing a dress that covered her completely and looked like a cactus. We (I?) anticipated some comment on the video, but instead got a few PR-friendly, noncommittal thank yous.

This was unexpected, considering that the entire album is supposed to be an open wound, and I wondered why an artist who already expressed her willingness to share her deepest emotions on her record decided not to comment in any meaningful way on the work we were about to experience.

The next room screens a history of Bjork’s videos, which again seems ill-conceived. Wouldn’t you be just as well served by watching them in the comfort of your own home, provided you have a decent sound system, a TV, and an ability to fast-forward? Because to watch all the forty videos Bjork has produced you’d have to spend over two hours in the claustrophobic room.

We continued the exhibit’s review in reverse by descending to the lobby where two impressive instruments called gravity harps are installed. What they do I could only guess, because they made no sound (there are videos of them in action on YouTube though).

The exhibit is accompanied by a monograph produced by the venerable M/M Paris design studio, long time Bjork collaborators. In the introduction, the exhibit’s curator Klaus Biesenbach effused:

Artists work with the images, sounds, and forms that surround them in daily life… Music, images, film, video, words, and sounds are experienced in real-life social settings such as museums, galleries, concert halls, and theaters, but also online and in the media. Bjork is a groundbreaking pioneer in connecting many different creative practices in and around her work.

Undoubtedly so, and Bjork’s genius lies not only in being a gifted singer and musician, but an all-around createur. Still, ultimately, her music is what matters most. As I got on the train back home, I touched the play button on my iPhone and was dissolved into Bjork’s emotional voice and her emotive music. Somehow, after all the contortions of the MoMa exhibit, this seemed enough.

All photography by Eugene Rabkin and may not be reproduced without expressed permission.