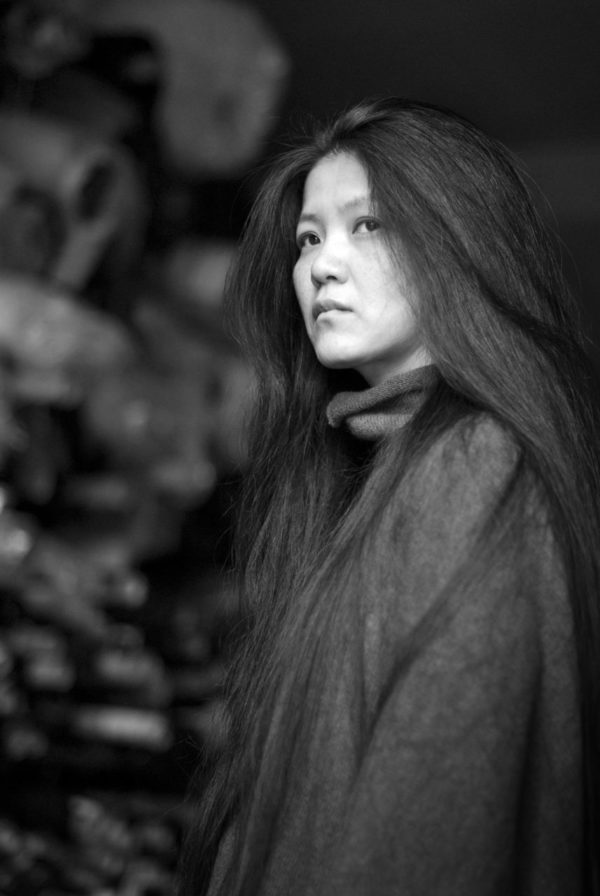 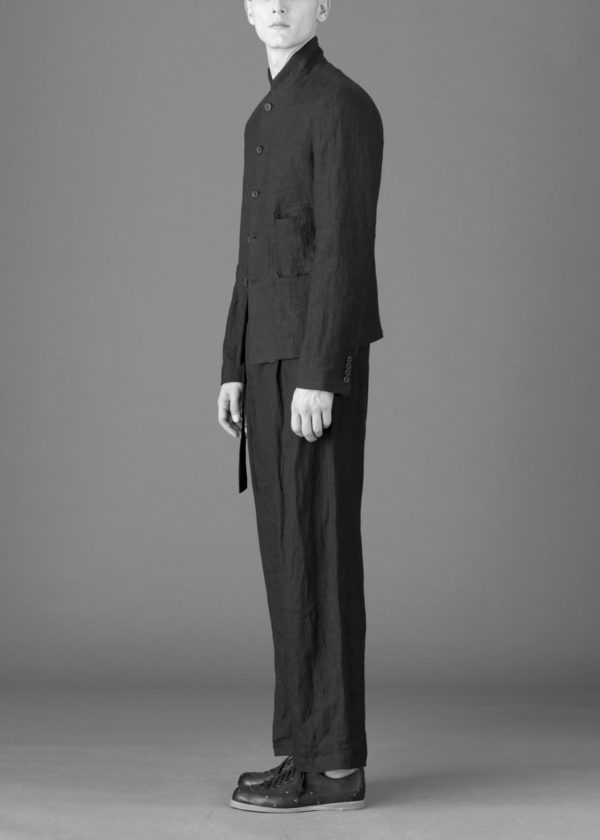 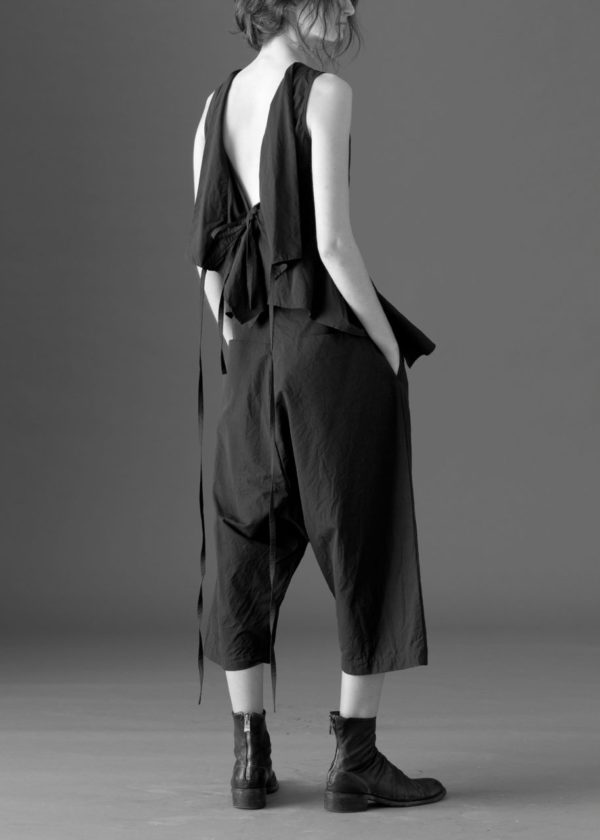 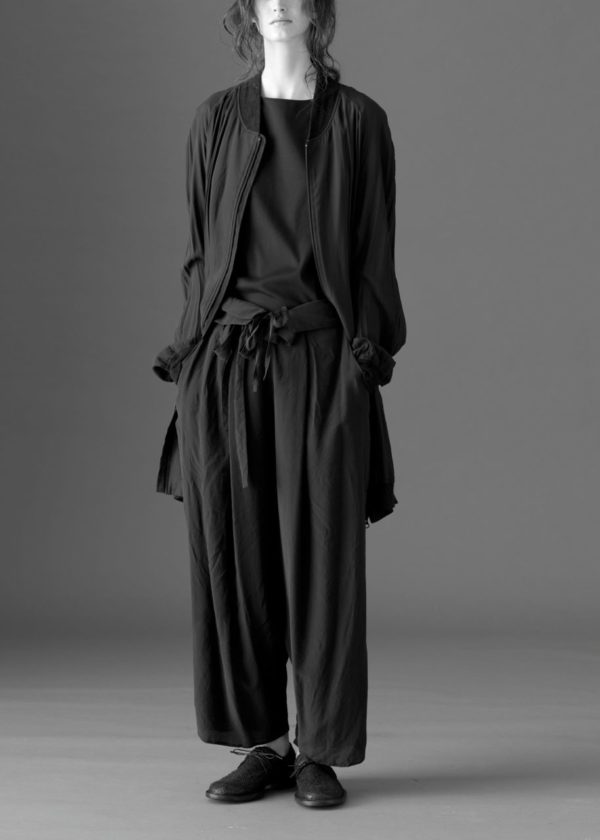 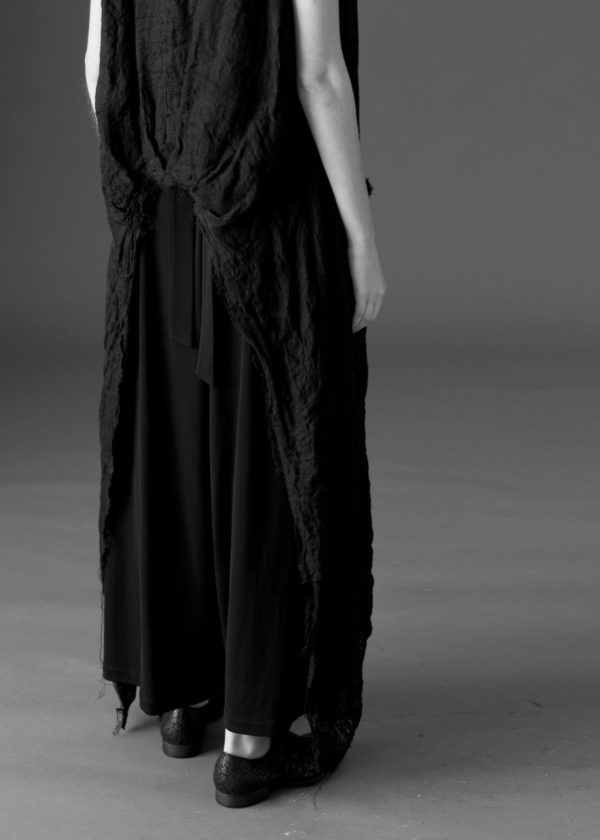 This past January during the men’s fashion week in Paris I, as is my habit, visited the showroom of forme d’expression. The label, which recently celebrated its tenth year anniversary, is designed by Koeun Park, who quietly works in Perugia, Italy on her men’s and women’s collections.

“Quietness” is the word that keeps resurfacing in my mind when I think of forme d’expression. There is quietness in its fabrics. They are luxurious, but never luxe. There is quietness of design; even when Park’s pieces are dramatic, and some of them definitely are, there is a certain restraint to them. When so many designers make their designs scream, forme d’expression speaks softly, and one needs to take care to slow down and listen. Which is absolutely refreshing in today’s look-at-me world that has become so obvious and thus uninteresting.

I think about a forme d’expression coat I own. A fairly classic coat at first glance, but also not, and you don’t know what makes it interesting until you look at it carefully. Then you may notice the way the collar is cut that makes it stand just so, and the two darts in the elbow area. You might also notice that the fabric falls on the bias and that there is just the slightest tone of beige underneath that gives the black its particular shade. Then you need to put it on to realize that it’s the slimness of the arms that completes its transformation from a classic item to a decidedly modern one. It’s a carefully thought out product, and careful thinking is the essence of good design.

When you to talk to Park, you understand where the quietness of her design comes from. There is a certain quietness to her, which comes not from shyness but from a no-bullshit attitude that she exudes and demands from others. She does the work and the work speaks for itself.

Quietness has its price, and Park, as we were sipping tea during my morning visit, expressed slight frustration about her work not getting sufficient recognition. Partially, the Internet is to blame, as her designs really need to be experienced in person. I have seen stores butcher her clothes through bad styling and subpar photos. But she will not be doing logoed t-shirts any time soon.

Park began studying fashion design in her native South Korea, moving on to Paris and then Milan. She began working early on, learning different systems of patternmaking. “I’ve spent about eighty percent of my daily life doing patterns,” Park told me before plunging into a monologue about the differences between Italian, English, and German patternmaking methods that she still actively studies.

Park’s career took off when she moved to New York to be with her husband. A week after she landed in New York, she got an interview at Donna Karan, and started the next day as Women’s designer for the main line.

Sometime later, Donna Karan announced a reboot of its men’s collection, which LVMH botched several seasons before, and Park was asked to design it. The experience was a total disaster due to the ineptitude of the company’s machinery. “I had around two months to pull together the men’s collection with a great mentor named Andrew Nipon, and that indeed was a turnaround for me. There were so many political and commercial obstacles, which made me realize that I need to go on my own, and that it didn’t require so much other than keeping one’s integrity in order to do something ‘big’ for oneself.” This was the last men’s collection Karan would produce and the last time Park would work for anyone. She quit and formed her own company. She called it “Factory of Faith” and the brand “forme d’expression.”

Part of Park’s duties at Donna Karan was working with Italian fabric suppliers and production facilities. She quickly realized the importance of personal interaction in an industry where so much gets lost in translation between the designers and the makers, who often work remotely. “Ever since I started working for brands I had no direct contact with these people,” she said. “You have to send out the sketches and wait maybe two weeks until the people will send back the first prototypes. Then you will get devastated because your idea was not transferred. The patternmaker will do their own thing, and the tailor will do their own thing. That caused a lot of frustration and that was the reason why I left. Why do I have to rush my thoughts because somebody did not understand me?”

So, when Park decided to start her own label it was obvious that she had to be close to the people who would realize her work. She packed up and moved back to Italy. For the first four years she had an office in Milan, commuting to see her suppliers and manufacturers. But even that was enough to satisfy her perfectionist mind, and she eventually moved to Perugia to be within a ten-minute drive from the people she works with.

These close relationships allow Park to produce exceptional work. Forme d’expression’s products become all the more precious in the world where so many designers cut corners and outsource work to increase profit margins. Park, on the other hand, tells stories of genius patternmakers, mad scientists that work with leather, and textile producers that make her fabrics with the same inflection others talk about their families.

Forme d’expression also stands out because Park is equally good at designing for men and women. This is no easy task, since many designers struggle with designing for the opposite sex, especially if they are independent and cannot afford to build a strong design team around them.

Park approaches menswear from a wardrobe perspective. The man she has in mind is someone mature, one who prefers tailoring to streetwear. He is grounded and not easy to impress with loud but ultimately facile ideas, the junk food of fashion. Park spends an inordinate amount of time thinking about the role of each garment. What does a man require from his pants? His shirt? His coat? She thinks about them so the wearer does not have to. “I want to make timeless and easy pieces that you don’t have to think more than two seconds before you say, ‘This is okay, I can just throw it on and it will look cool.’”

One such man is the journalist and fashion critic Angelo Flaccavento, who stumbled upon forme d’expression’s showroom in Paris during the men’s fashion week. “I saw the collection in the window and was drawn in by the purity of the cuts and the serenity it all oozed,” he said. “In Koeun’s work I like the unique approach to fabric – her choice of tactile, precious materials is a signature – and the fact that it is so sartorially refined. It can be perfectly integrated with my own wardrobe, which is actually a little more classic. I like her way with the double-breast and the cutaway, and how she manages big volumes without making you look bulky. “

Park’s approach to women’s wear is quite different, more visceral and emotional. “It’s all about shape, volume, and texture,” she said. “The approach to the construction in the garment is less calculated in microscopic measures, functionality, and logic.”

I asked Park if she imagines herself when she designs women’s wear. “I think I visualize myself as someone I wish I could be. I’m a very romantic person, even if I don’t sound romantic. When I see my clothes that look too romantic or poetic, I think that it’s someone that I want to be for a very special occasion.“

But the flipside of this Cinderella undercurrent is very pragmatic and it adds another layer to the essence of forme d’expression. “The common thing to approaching men’s or women’s is that whichever piece I create, it has to be really comfortable. Always. I try not to make women’s clothes that I would never wear.”

All images by Johan Sandberg