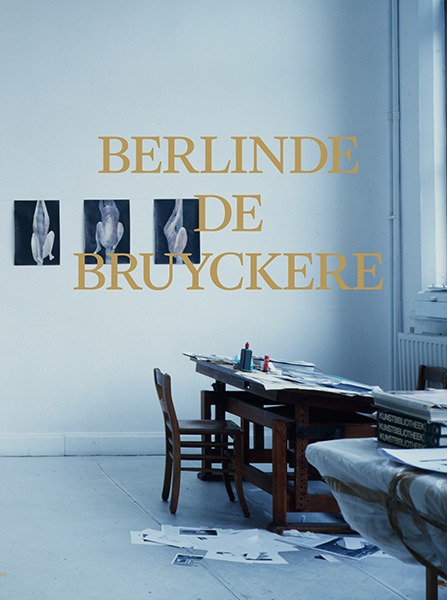 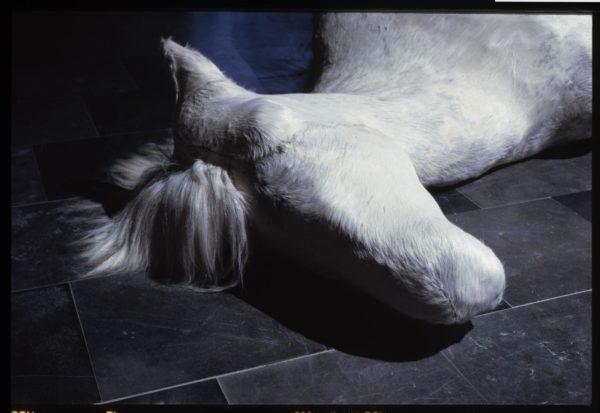 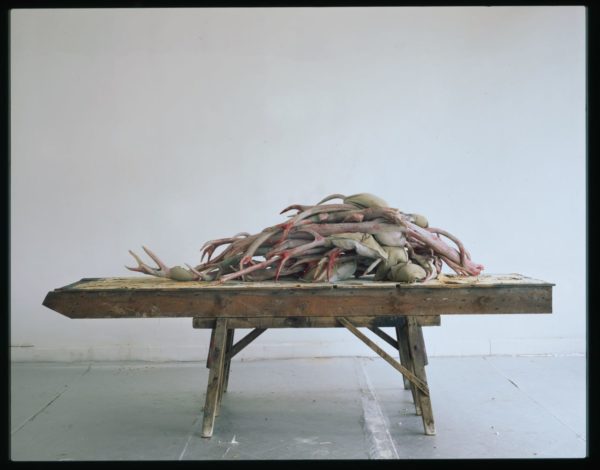 Published by Mercatorfonds in Belgium, the US version of this magnificent book is printed by Yale University Press ($95). At over 300 pages, the monograph contains over 200 high quality photographs. It was published in conjunction with the major De Bruyckere retrospective that finished this year in Ghent, the artist’s hometown (and which I missed by one day, a source of unending woe), and it provides the most comprehensive overview of the artist’s work.

And what work it is! – at once poignant and soft, full of pain, suffering, and empathy. Most of De Bruyckere’s sculptures resemble human and animal carcasses – flesh that is torn, punctured, and otherwise wounded. It looks bare and frozen, the way you see it at the butcher’s (more on that below).

The wax and epoxy that De Bruyckere uses with unparalleled skill allow for extremely lifelike representation, which the artist then puts at a remove by contorting the flesh and stripping it of all potential beauty. The results are not shocking or voyeuristic, but profoundly moving in its sadness.

The sadness is compounded when De Bruyckere choses to “sculpt” horses. The quotation marks are deliberate, because her horse sculptures are quite literal, made of preserved horsehide. “Lost II” is a sculpture of a horse’s head, its neck gently bent at a graceful angle, eyes removed. This is the gist of De Bruyckere’s work, empathy and horror entwined.

The book comes with the usual paeans by art curators, full of dead art criticism language that they can’t seem to shake off. Instead, this monograph would’ve benefited from a biography. When I was buying the Dutch version of the book in Antwerp earlier this year, the shop owner told me that De Bruyckere’s father was a butcher and watching him work on the carcasses left an immense impression on the artist as a child. This bit of information was more insightful than anything written in the book’s essays.

There is something in De Bruyckere’s work that must have a literary dimension, as all of the essayists invoke literature in order to explain her work. Unsurprisingly, these are authors who felt that the world is bleak and disorienting – Jean-Paul Sartre, Hugo van Hoffmansthal, Paul Valery. One quote of Valery’s is worth noting; “Nothing is deeper in man than his skin.” This would’ve made for a terrific book title.

The best writing in the book comes from the author J.M. Coetzee, a friend of the artist. He describes De Bruyckere’s work as having “The sense of beauty and strength in what has been left behind. A plea for the useless, the neglected.” The same can be said about Coetzee’s writing, and it is easy to see why the two have become friends. His writing is also the sparsest, and leaves you wishing for more.

Virtually all of the bodies that De Bruyckere sculpts are headless or faceless, covered with cascading hair. Headless bodies are a great equalizer, since faces give people their sense of individuality. In a perversely democratic gesture De Bruyckere takes this away.

The most monumental of De Bruyckere’s works is Cripplewood, which she presented in the Belgian pavilion at the Venice Biennale in 2013. This time the artist chose to represent not the animated body but that of a tree. The philosophical underpinnings of the work arose out of a letter exchange between De Bruyckere and Coetzee.

Here, Coetzee again lent his skills as a wordsmith. “Cripple: a word no longer in polite use. Rejected as unclean, it is dismissed back to the world from which it came and to which it belongs, a world of hovels and tenements, of open drains and coal cellars and horse-drawn carts and starving dogs in the streets. An unwanted world, pressed back, repressed, buried. The cripplewood tree grows out of the buried past into our clean present, pushing its knotted fingers up through the grate/gate behind which we have shut it.” Look and weep.

All images courtesy of Mercatorfonds Publishing