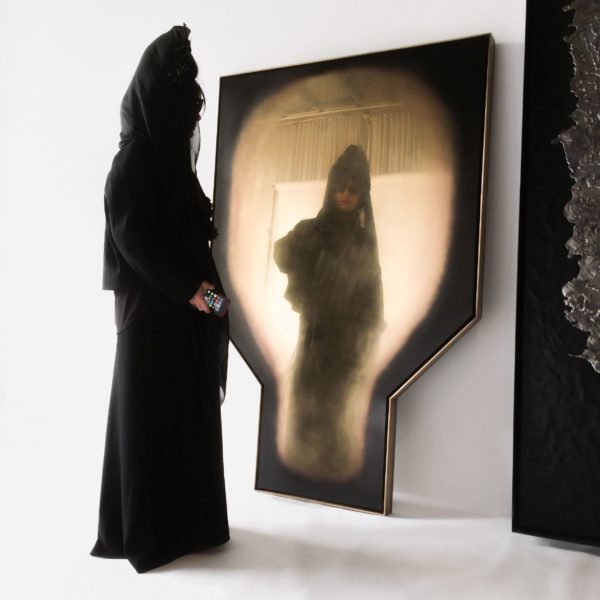 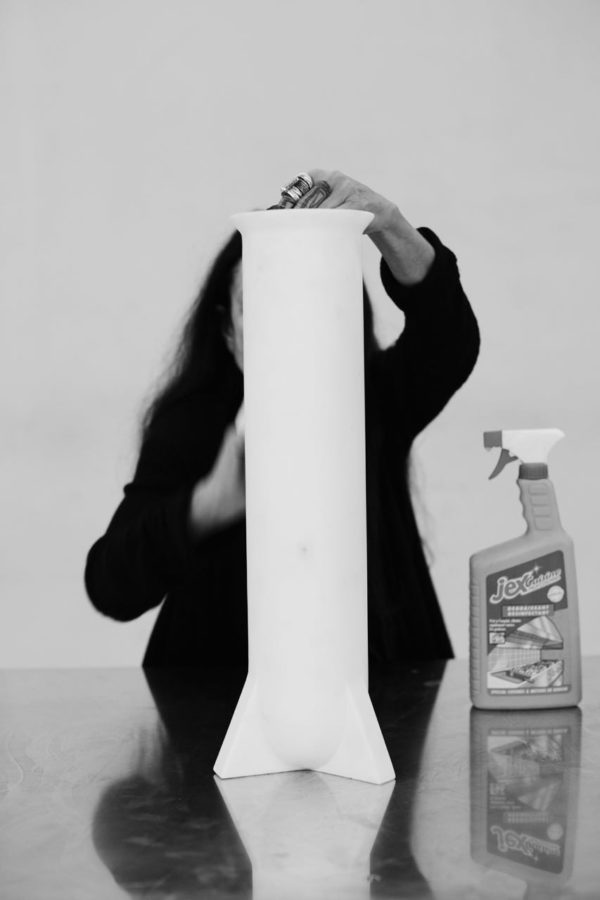 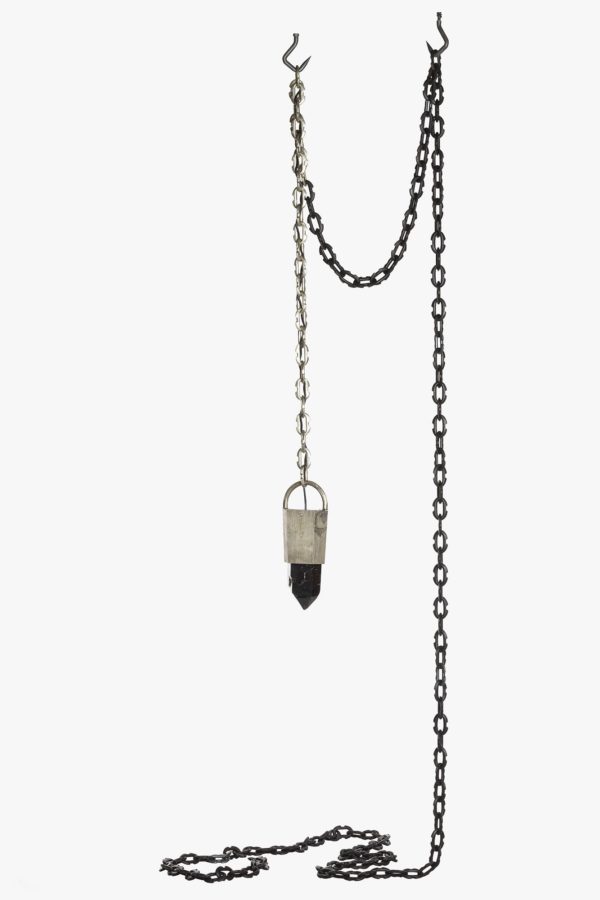 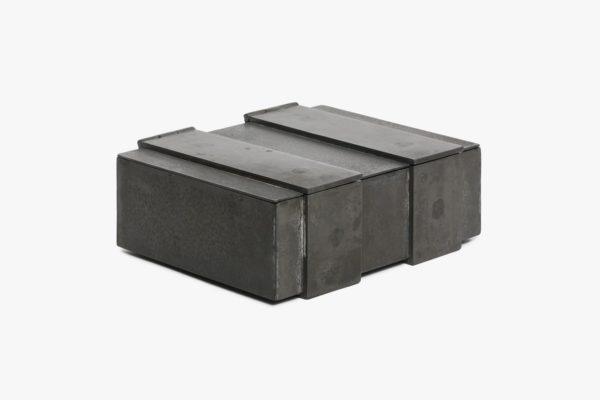 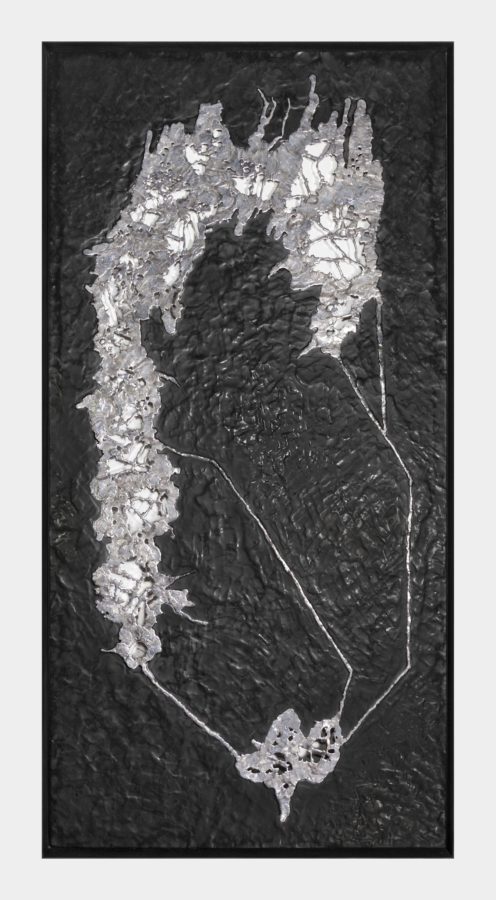 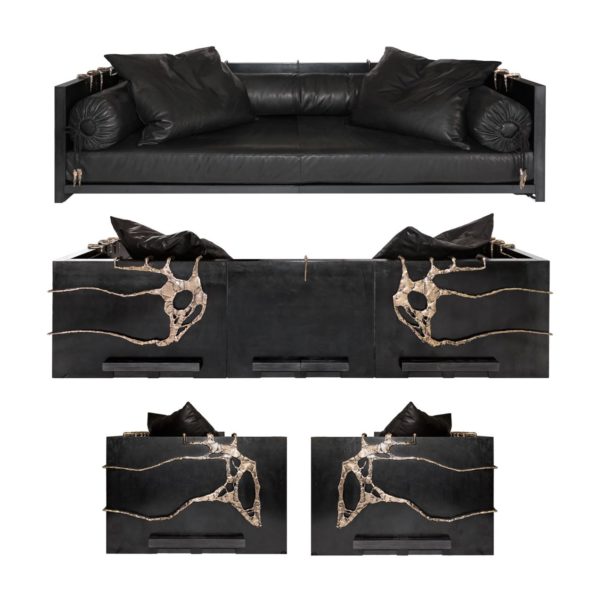 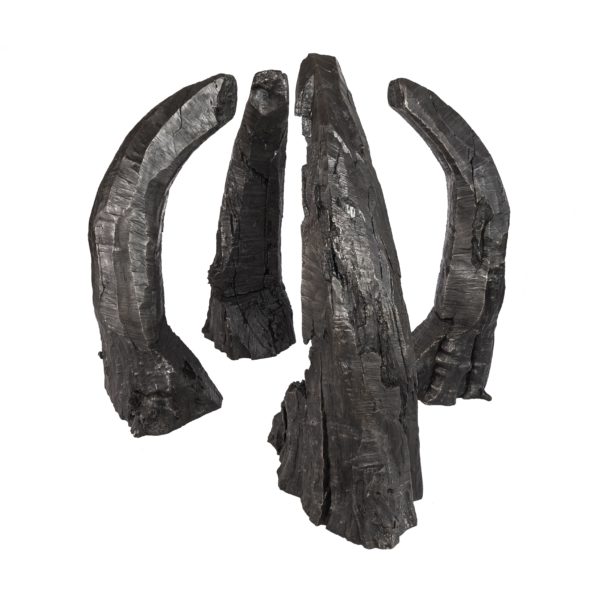 This impressive collection has come together in recent months under one roof, LMD (Lukas Machnik Design) Studio, but it is a result of years of work and aesthetic development. It was also a result of friendships that have been forged over the years, sometimes in a serendipitous way.

I first met Machnik and his partner White in Chicago two years ago. I was smitten by their house that contained their minimalist furniture and artwork of wood and steel rendered in the deepest shades of black.

At the time, Machnik, who has been doing interior design for fourteen years, completed a series of chairs and benches that he called “Monuments,” an homage to his favorite minimalist artists like Richard Serra and Donald Judd (who also dabbled in furniture).

His new piece for the fair is a mirror made entire of bronze polished to reflective quality that recalls ancient mirrors.

White, meanwhile, has already developed his signature technique of making abstract art by using melted metal instead of paint. His paintings look like a single silver fractal on a background of black or white.

Machnik and White are also fashion enthusiasts and for them fashion, art, and interior design are part of the same aesthetic universe. “At some point, when you have enough in your closet, and if you are truly into this aesthetic, you will start looking around at your house and wanting it to match what you wear,” Machnik said of his design philosophy.

Fashion designers have known this for a while, and we have seen the vulgar Versace home offerings, and the bourgeois minimalism from Giorgio Armani and Calvin Klein. Closer to home, Ann Demeulemeester has designed a table for the Belgian maker Bulo. But only Rick Owens has been able to fully translate his goth vision of fashion into furniture.

It only made sense for LMD Studio to carry Owens’s line of interior design. On one of his Paris trips several years ago Machnik befriended Michele Lamy, Rick Owens’s wife and creative partner. While the furniture line began as a project by Owens and Lamy when they moved to Paris and needed to furnish their place, by now it really has become Lamy’s baby.

Lamy gave LMD Studio a full range of the furniture and objects to sell not only in Chicago, but in the LMD gallery that will open in Paris this June.

“Such show of trust on Michele’s part is very rare,” Evan Sugerman, the designer of the jewelry line Parts of Four, told me while we were chatting on the massive sofa designed by White at the LMD Studio booth at the fair.

Sugerman is no stranger to the Owens/Lamy world. He was also a friend of Lamy’s, who once came to see his old clothing line Ernte in Paris. They hit it off and kept in touch.

At some point when Sugerman, a native of Los Angeles who now lives in Bali, was in a creative slump, Owens asked him to design some belt buckles. “I drew a dozen of them and sent the drawings to Rick thinking he’d pick one or two. He took them all,” Sugerman, who went on to design some of Owens’s jewelry, said.

When Machnik and Sugerman met at the Parts of Four showroom in Paris this past January, they struck up a conversation about interior design.

“After fifteen minutes of talking we felt like we have known each other forever,” Machnik said. “It’s these connections that make life interesting, because once you meet likeminded people that have the talent and passion for this specific lifestyle, it’s no longer a job. I think we would not be able to function in this society, in this world, if we weren’t doing what we’re doing.”

Sugerman wanted to get into furniture design for a while, but he didn’t quite know how to approach it. Machnik helped realize Sugerman’s ideas and P4H, Parts of Four Home, was born. The idea the designers had was to blow up the Parts of Four jewelry to epic proportions. Thus P/4 necklaces have become pendant lights and sconces, and jewelry cases were turned into tabletop boxes.

Everything is produced by the artisans in Bali who still use old equipment, though you wouldn’t be able to tell this from the perfectly machined light enclosures. The quartz crystals that serve as lampshades are sourced in South America.

But perhaps the most impressive thing is the massive, 20-foot linkless chain made for one of the pendant lights, hand-carved from a single piece of wood. It took me a while to process how it was made. I’ve never seen anything like it before.

The centerpiece of the LMD Studio booth is the oversized leather and metal sofa that was created by Lonney White III. White studied art in Montana where he made oversized sculptures.

When he moved to Chicago to continue his education at the School of Art Institute of Chicago (SAIC), the constraints of space made him rethink his approach to art.

“I didn’t have the large studio that I had in Montana,” White said. “The challenge for me was how to transform the 3D work into 2D.”

The answer was in making paintings using materials normally reserved for sculpture, namely metal. Each painting is painstakingly crafted by White out of melted metal, which is then covered with a combination of beeswax and tree resin. Looking at them reminds you of chaos theory rendered in steel.

Machnik was one of White’s admirers. “The paintings seem so effortless, but the process in making the spills is actually very complicated. It’s a lot of welding and shaping that pulls it all together,” he told me.

At some point White began to dabble in furniture. His first pieces were long modular tables made of blackened steel. Completely flat when disassembled they were ingeniously held together by the weight of their components.

But it is the sofa that marks White’s return from 2D to 3D, completing a creative circle. The steel frame of the sofa follows the same principle and can be easily disassembled. The components are held together by large bronze clips that mimic the fractal elements of White’s paintings, and the cushions are covered in black leather.

One of White’s heroes while he was in high school trying his hand at art was the Montana sculptor Phoebe Knapp, who was creating massive sculptures using found wood and a chain saw.

One time at a party fifteen years ago White plucked up the courage to talk to Knapp and she became his first mentor. They kept in touch and eventually Knapp decided to cast some of her wooden sculptures in bronze and show them at LMD Studio.

“Our relationship has come full circle, and it’s a wonderful one, because Lonney and Lukas were the ones who encouraged me,” Knapp said. “I work in wood because it has warmth and history, but it has issues too, in terms of these massive pieces being outside. But, I was hesitating to make the next step, until those two finally encouraged me.” Knapp cast four of her wooden sculptures, “The Beastie Boys,” in bronze. Put together the bent pillared figures look like some ancient wood quarterback huddle.

When Machnik and Co. go back to Chicago next week visitors will be able to view everything by appointment. And in June the P4/LMD will open a big underground gallery in the Marais in Paris during the men’s fashion week.

All images courtesy of LMD Studio