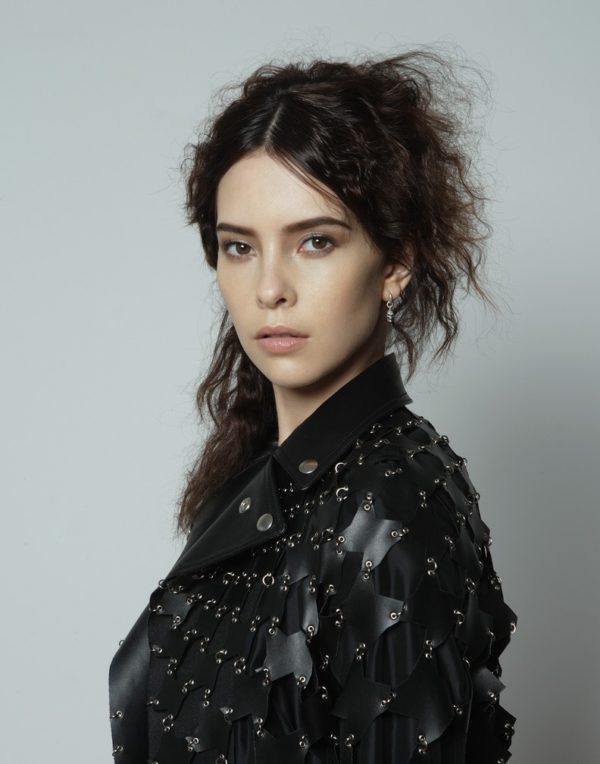 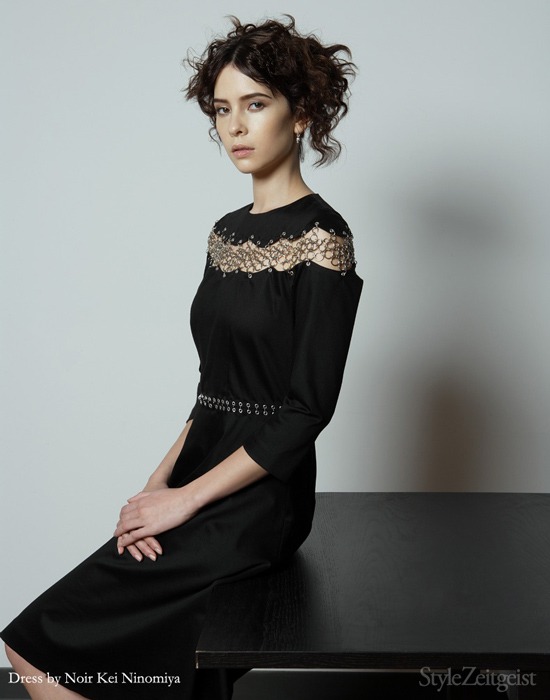 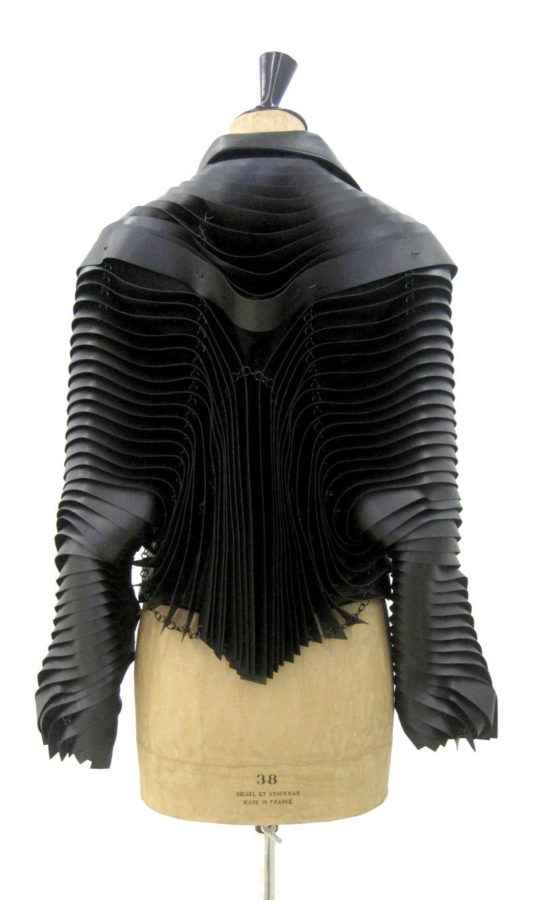 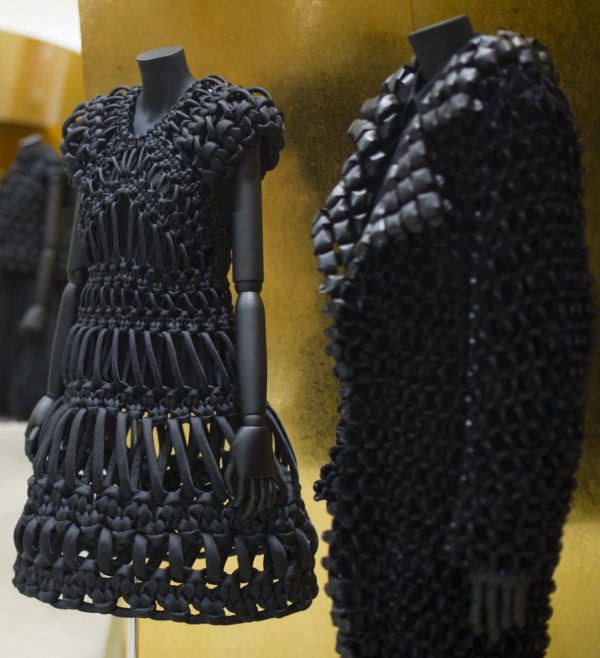 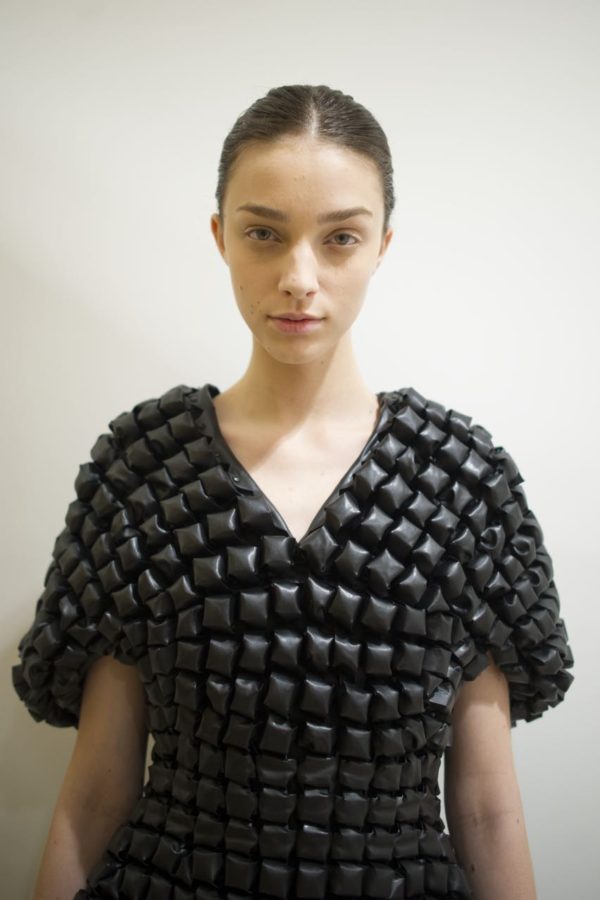 The defining characteristic of Ninomya’s work is the astonishing intricacy of his construction methods, which is quite hard to put into words. “Noir” is an apt name for the line, as Ninomiya sticks exclusively to black. This is not because he is a creature of the night or has listened to too much industrial music as a teenager, but because he spends so much time thinking about construction and silhouette that color is the last thing on his mind.

Ninomiya avoids sewing whenever possible. One of his signature construction methods is putting garments together by linking hundreds, or thousands, laser cut pieces of polyurethane, like some goth Legos. He fuses them with snaps or small metal rings.

As Ninomiya walked me through the Fall/Winter 2015 collection he was previewing the next day at the Comme des Garcons flagship in Chelsea’s gallery district, he showed me a coat that was made of something that looked like oversized computer keyboard keys. Four thousand of these three-dimensional pieces went into a single coat. Each coat is constructed over the course of four days by his assistant and patternmaker, Aya, who traveled with Ninomiya to New York.

Ninomiya also avoids sewing by using chains or tape instead of thread. Some garments are made from long strips of fabrics held together with snaps. The complexity of Ninomiya’s work is nothing short of arresting – it literally stops you in your tracks and demands your attention.

The work speaks for itself and it is easy to see why Kawakubo gave Ninomiya his own line after merely four years of his tenure as a patternmaker for Comme des Garcons. In turn, Ninomiya’s flights of fancy could hardly be realized outside of Comme des Garcons, whose contractors and producers are used to making the impossible possible. “Comme des Garcons the company values creativity,” Ninomiya told me in an interview for another article. “The factories it works with respect this and make efforts to do their part in the creative process.”

By now you might be imagining Ninomiya as some brooding genius, but he is nothing of the sort. He is shy but jolly once you get him talking, and he has a self-deprecating sense of humor. He talks as if he is still puzzled at his good fortune, wondering if the whole thing is a mistake and whether he should even be here, on the cutting edge of fashion. Ninomiya’s round face, topped by a generous mohawk, lights up when he discusses his work. He speaks in halting but good English, which he had to learn in order to pursue his studies at the Antwerp fashion academy.

Ninomiya’s career, besides his unquestionable talent, is a series of fortunate accidents. Before Ninomiya decided to pursue a fashion degree he studied French literature as an undergraduate. The choice was somewhat arbitrary. Ninomiya was a countryside boy who wanted to move to Tokyo to experience the metropolis. He liked to read books and he liked Surrealism, so he decided to apply to college for literature.

Ninomiya was already fascinated by Comme des Garcons, because there was a small CDG shop even in his little corner of Japan (Comme des Garcons reportedly has over 300 retail outlets in the country). But the real revelation came when he visited the Comme des Garcons Aoyama flagship in Tokyo. “The atmosphere, it’s completely different than the normal fashion,” he said. Upon graduating, Ninomiya decided to pursue fashion.

He applied to the Antwerp academy partly because of his interest in French literature. Ninomiya sent some sketches in, went to an interview, and was surprised when he was accepted. “I think they made a mistake, actually,” he told me with a laugh.

In 2008, during the summer break after his first year in Antwerp, Ninomiya was broke and he decided to look for a job. He took his portfolio to Comme des Garcons. He went through three interviews, including one with Junya Watanabe, and then with Rei Kawakubo herself. He got the job the same day, and he never went back to Antwerp. Four years later, Kawakubo offered him his own line. Hitherto, no one at Comme des Garcons has risen so fast.

Given the coherence of Ninomiya aesthetic (and his mohawk), I naturally wondered whether his work is informed by his cultural experiences, but it turned out to be nothing of the sort. “The most important thing for me is making something new, finding new construction methods, or making new silhouettes,” he said.

Hence, Ninomiya’s starting point is not an aesthetic idea rooted in culture, such as punk or romantic poetry, but the garment itself. It’s a very technical, nuts-and-bolts approach that may not sound sexy but is refreshing in the world where designers talk about their inspiration ad nauseam, while often delivering little in terms of final results. With Ninomiya, the situation is reversed.

The first thing about those garments is that they need to be experienced in person. They are not Instagram-friendly. They don’t have catchy graphics or slogans or other attention-grabbing, infantile (and infantilizing) gimmicks. What they do have is intricacy of thought process manifested in material. There was the aforementioned 4,000-piece coat, as well as a jacket version, to make the myriad of gold-colored studs visible.

There was also a hooded wool duffle coat, each pattern piece punched through with metal eyelets and held together with metal rings. Imagine if Frankenstein was not clumsily stitched together but bound like some extremely elegant spiral notebook and you get the idea.

A dress was made of long strips of fabric, vertically aligned and punched with studs. Its three-dimensional shape unfolded like a harmonica. One top was woven together by hand from a tube of black fabric. All of these would be presented the next day to a carefully selected audience who would be able to preorder the pieces on the spot.

It was Ninomiya’s first time in New York and he was staying in town only for a few days. He was planning to visit some art galleries. I suggested a Richard Serra exhibit a few blocks away. It seemed apt.

Images 1 and 2 from the StyleZeitgeist editorial, “Ophelia”

Other images are courtesy of Comme des Garcons