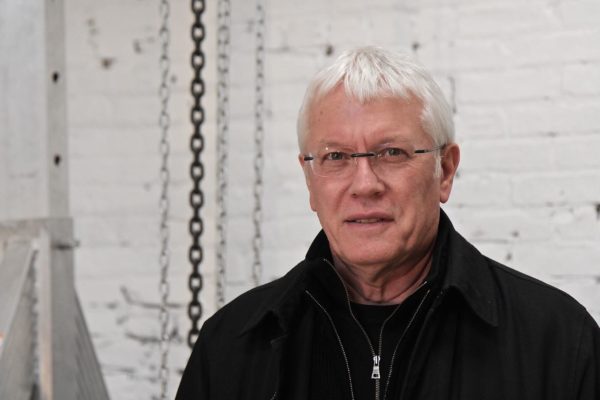 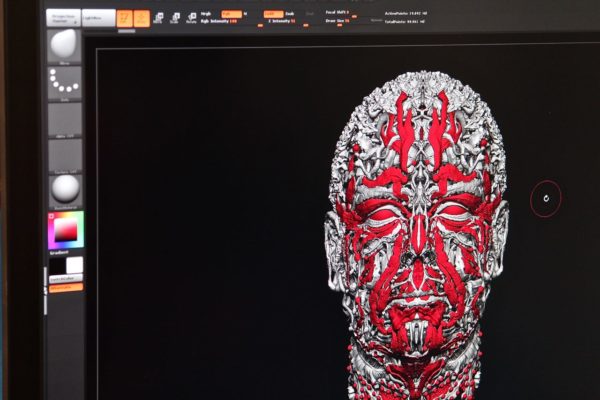 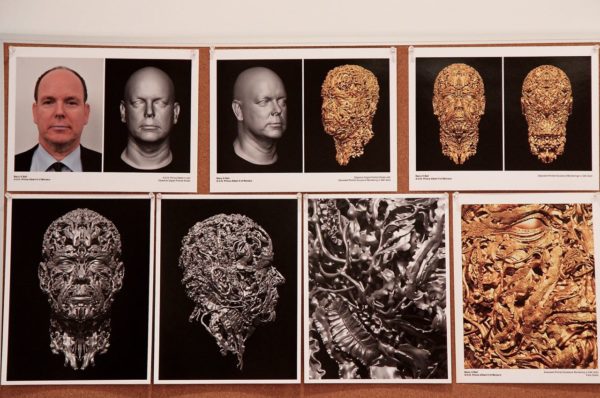 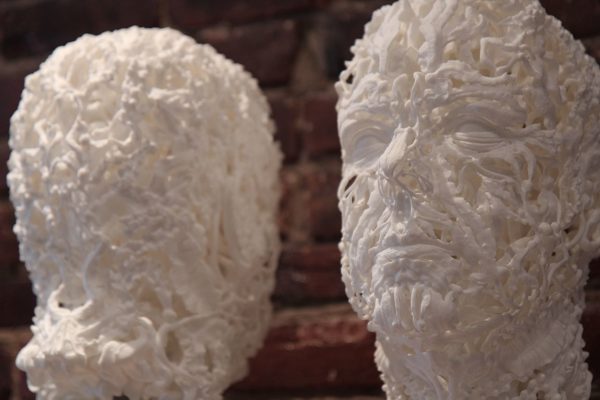 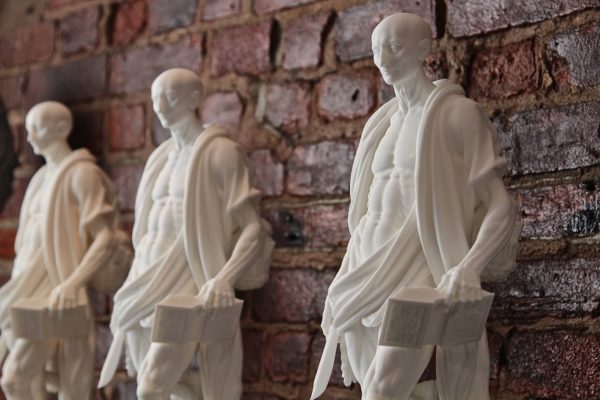 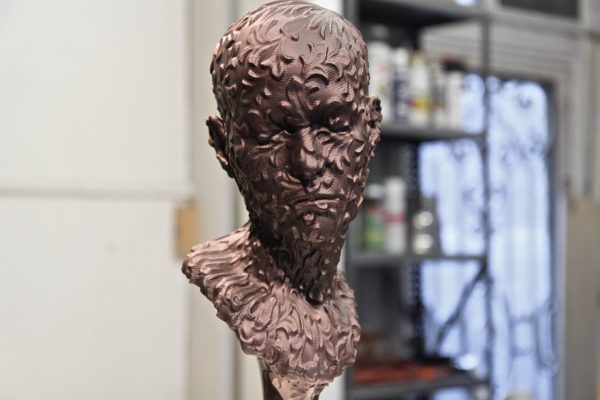 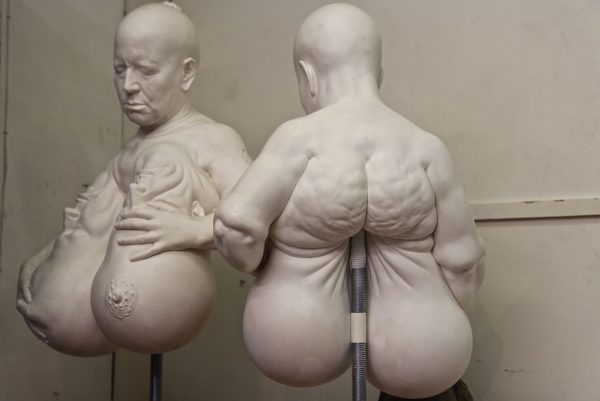 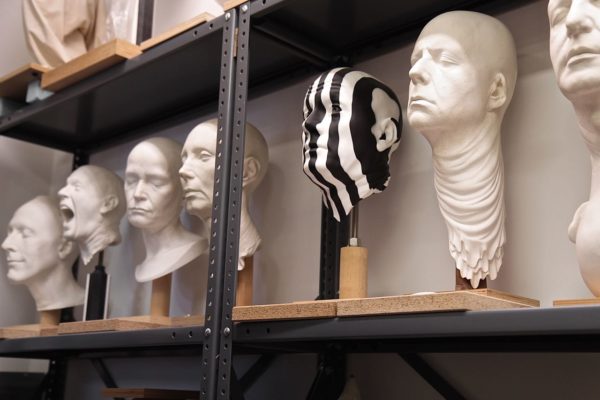 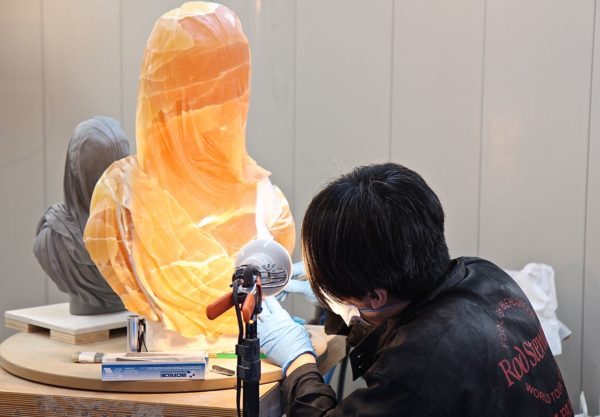 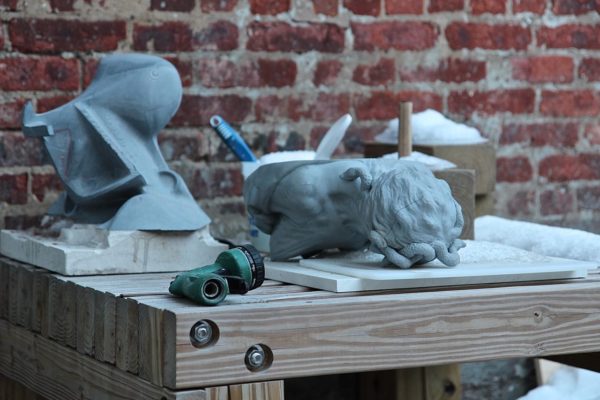 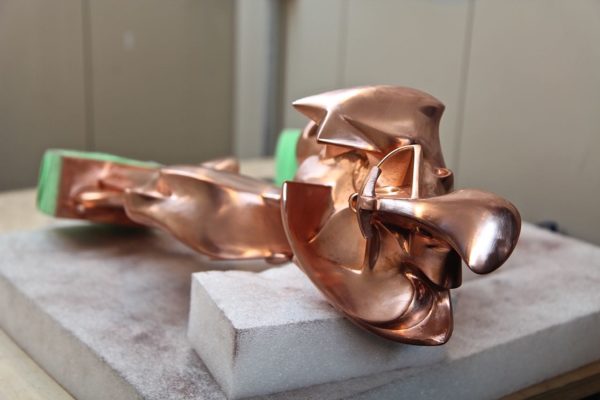 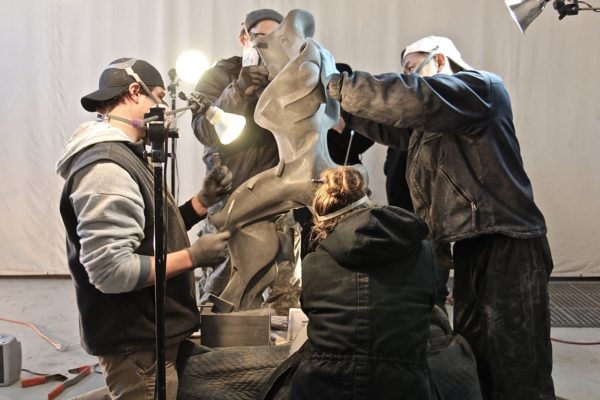 Ball, a Californian native, who grew up working with hands by tinkering with all kinds of machinery, has been making art for a long time. But it was only in the last decade that he really has come into his own, producing work of unparalleled complexity. His sculptures are now being bought by fellow artists like Damien Hirst and Zeng Fanzhi, and by the fashion designer Rick Owens, which is how we learned about Barry X Ball in the first place.

It happened when our editor, Eugene Rabkin, was stuck at Owens’s house waiting for a taxi in a snowed in Paris a few years ago. Owens’s showroom used to occupy the first floor of the house but was unexpectedly moved. Instead of rows of tables and clothing racks he saw two impeccably chiseled heads suspended by metal wires from the ceiling, staring at each other, metal rods piercing the heads from top to bottom. They also had faces on the back of their heads, forever memorialized in a screaming position.

One bust, as Ball told me later, was of the artist himself and the other of Matthew Barney, Ball’s longtime friend. They were perfectly awe-inspiring in their grotesqueness. Below them was a table with several art books. The artist’s name read “Barry X Ball.”

As a sculptor, a natural and necessary part of Ball’s language is scale, dimension, sizing things up. And, for those familiar with Ball’s work, it is highly labored over. To get from initial concept to finished piece takes Ball at least a year (if not years) of thinking, planning, organizing, gathering and making, not much different from putting up a world-class computerized 3D milling facility from scratch. This is work for the long haul and Ball, I learned, is by nature and necessity much more patient and persistent than you or I.

A charming yet otherwise inconspicuous brownstone in Williamsburg hides behind its front door Ball’s current studio, the modern equivalent of of what I imagine must have existed in the Northern or Italian Renaissance. Not in the sense that studio assistants sit banging out work that Ball, as master, will put a few finishing touches on, thereby imbuing the work with his authorship, but, rather, that hidden behind that door there seems to be at any given time half a dozen professionals plying their trades on sculptures in stages ranging from embryonic, still on large computer screens, to others being smoothed by hand with files held like pencils.

At the top of a flight of stairs one enters a small area where Ball’s office manager attends to details (and Ball is all about attention detail), surrounded by artist filing cabinets.

On the wall are framed prints of Ball’s work installed in Italian palazzos, which on reflection is not as jarring as it sounds. Much of Ball’s recent work takes as its material starting point sculptures of art-historical importance.

Ball’s most recent gallery show was in Stockholm at McCabe Fine Art. There, three sculptures where exhibited (representing practically an entire year’s worth of work) two of which, Purity and Envy, spring from Italian Baroque masterpieces by Antonio Corradini and Giusto Le Court, respectively, and the third, Perfect Forms, was a thorough re-imagining of the more familiar work by the futurist Umberto Boccioni, Unique Forms of Continuity in Space.

Off to one side is a small kitchen whose window gazes upon a New York City ubiquity, a construction site (“Some banker bought this,” Ball said with a tone of haplessness that let you know everything you need to know about what Williamsburg is turning into).

The rest of the small floor is taken over by offices, one for Ball, and two others where several studio assistants work shoulder to shoulder surrounded by miniatures studies and 3D printed samples of Ball’s work and its inspirations sitting on bookshelves. Two of these are head sculptures of Prince Albert of Monaco, rendered unrecognizably ornate. The assistants manipulate the three dimensional renderings of old sculptures that Ball scanned on sites in France and Italy, making them imperceptibly more perfect mouse-click by mouse-click. People talk about splitting hairs, but at Ball’s studio the assistants actually do something like that.

Ball took me into in his office where the architectural renderings for the new studio and production facility were spread out on a work desk. “The facility inside it will have – and this is the 2nd floor of the existing building – digital offices and, looking out over this,” he gestured, “this is a courtyard where the stone can also arrive and I’ll have 20-ton bridge cranes running along here and inside. Here’s a car so you can get and sense of scale and how large this place is. It’s going now already. We’re actually setting up a pop-up studio in this building while the whole permitting process is going on. We’re going to work on some large pieces just using the shell of a building for right now because we’re out of space here.” One of the reasons Ball is moving the studio is to give him the ability to make significantly larger sculptures.

What is going on is that Ball has managed to convince European authorities to allow him to employ the most advanced technologies to digitally scan in 3D their priceless patrimony on site – an impressive feat for anyone familiar with the European art bureaucracy. The resulting scans are then worked over to push and render the original pieces more extreme in their physical presence or more perfect, for instance, by re-imagining and completing them in the round in ways the original artist could not do or it did not make sense to do (because, say, no one would ever see the back of the sculpture anyhow).

The worked-over scans are then taken to a world-class computerized milling facility (fewer of those than one would be led to believe based on headlines blaring about our 3D printing futures).

There, after logistical hurdle, heaving blocks of stone, such as the rare Belgian black marble and the Carrara marble, that Ball has sourced internationally are milled. Over hours, weeks, even months of milling, the historical source material begins to become recognizable. This rough draft, as it were, is then returned to the studio where in the tenement courtyard, Ball’s young assistants spend days upon days in small sheds refining, shaping, polishing and perfecting the sculpture, hovering over each work like a dentist with a gas mask and ear buds.

That is what is going on in a literal sense. From the second floor offices we go down to the first floor, with its staging area of sorts for finished work and work in process, through a storage area of sorts piled ceiling high with casts of heads and wildly distorted sculptures. One of the sculptures, made out of a block of onyx, incorporated the little hands and arms of one of Ball’s children merged with the cast of an acquaintance’s head and onto a dwarf’s torso is a perfect example of Ball’s style – dizzying and grotesque.

We continue out the back door and onto a small courtyard with the finishing sheds, blocks of raw stone, and failed sculptures lying like dead soldiers, and then into the basement. This space is comfortingly old-school with tools on hooks and sculptural models and WWII era machinery where, in a sense, Ball’s career began. His life film runs in reverse, from the blueprints of the new in the light of day down to the basement machine shop where it all started, if not literally, some decades ago.

That is the what. The why is more challenging to address. Ball’s work is not easily boxed up in contemporary terms. The knee jerk reaction is that it’s all just a clever a copy, a lavishly produced appropriation, but the reality is much more complex and awe-inspiring. It is an homage, a result of Ball’s dissatisfaction with the vacuous world of contemporary art. But even more, the work represents the dialogue of an incisive contemporary mind, with its contemporary concerns, with the work of artisans who would have been peers centuries ago in technical skill, intellectual hunger and capacity to patiently handle large-scale projects over time.

All photography by Eugene Rabkin
Click on any image to enlarge