Veronique Branquinho: To Be Free 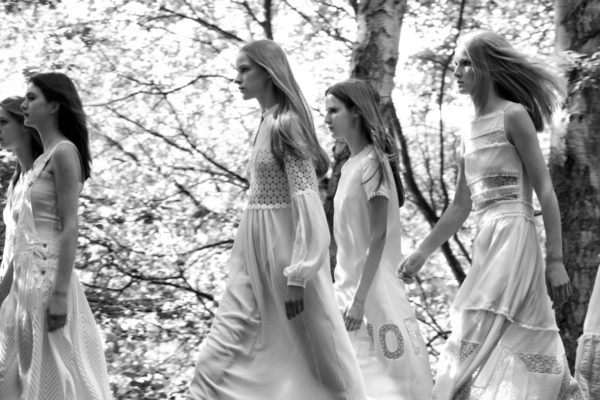 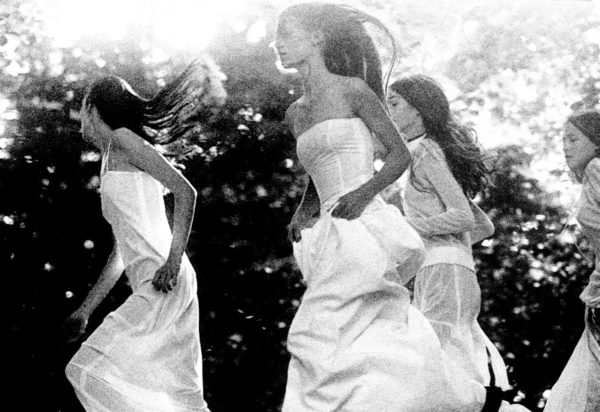 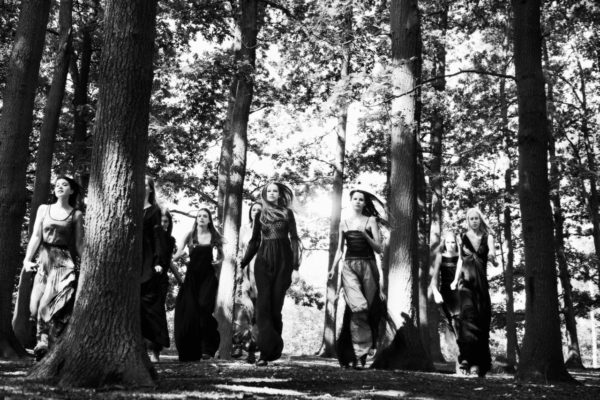 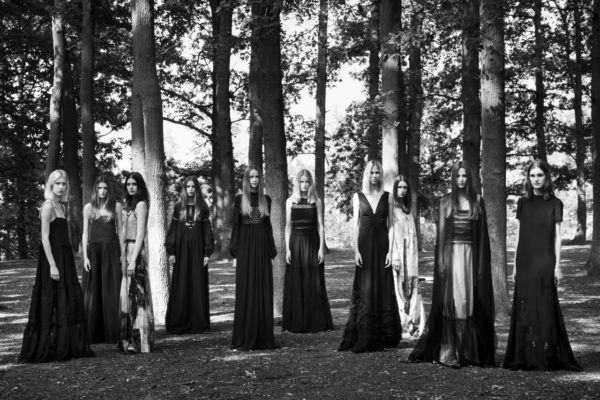 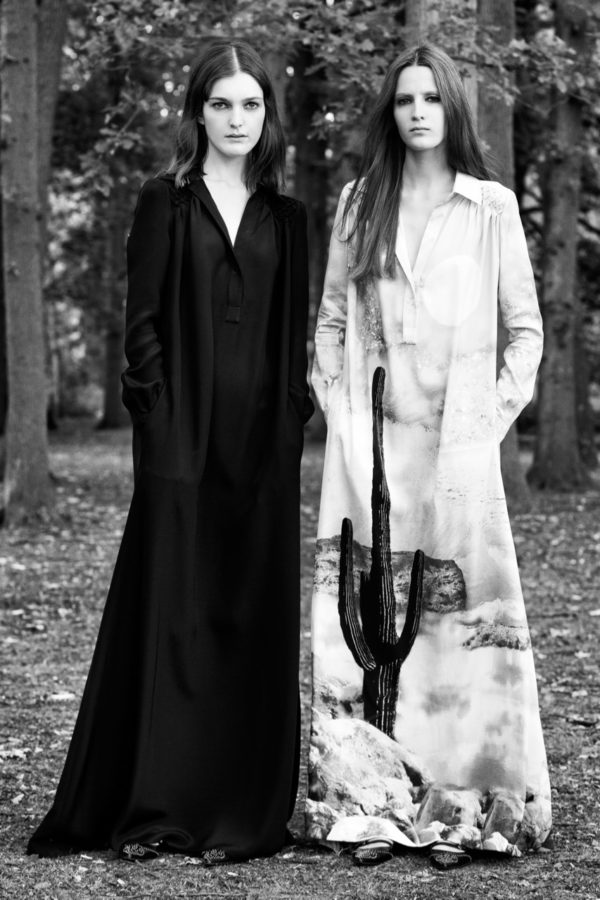 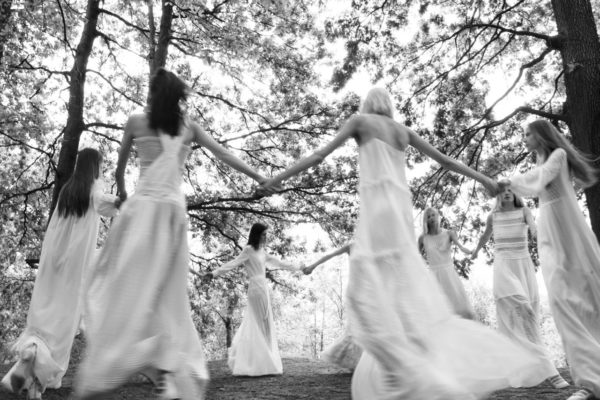 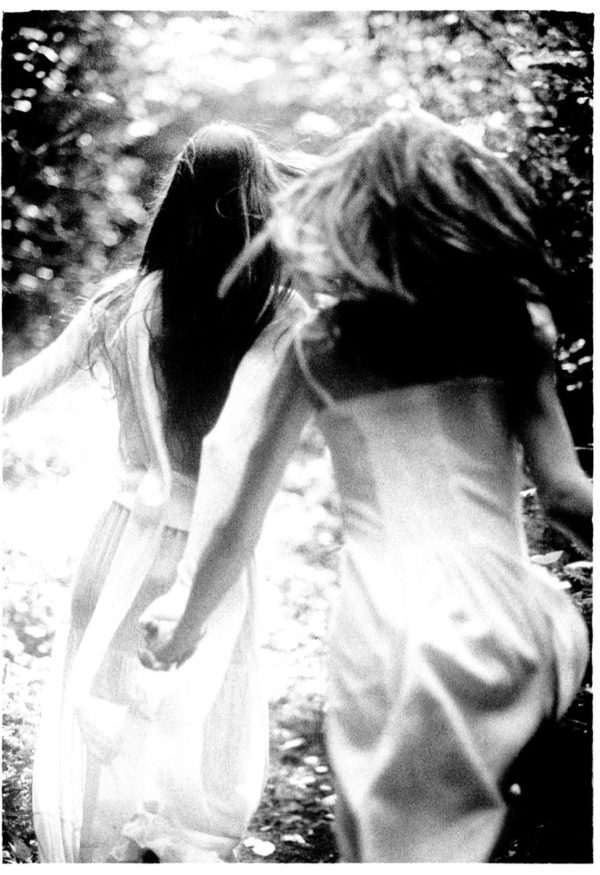 I meet Veronique Branquinho on the 21st floor of a high rise in Chelsea where she’s showing her pre-Spring 2016 collection. She’s in a corner suite with floor-to-ceiling windows that glance out over the Hudson, where industrial barges and cruise ships coarse by in clouds of spray and vapor. The evening is pearly grey and the room feels weightless, suspended up here in a box of steel and glass.

Weightless, too, is the effect of the collection: dresses, all white and long, draped on a sparse cluster of forms with a lone live model at their center. Her dress is black with leather straps and falls to the floor. I think of Greek columns and their counterpart in ancient draperies, where the cloth is suspended simply from the shoulders and takes shape only with the moving body.

On a single rack against the wall there is another group of dresses, but all in black. It’s a black that seems right especially in summer—deep, cool, and breezy. The high contrast of black and white resonates with a couple of dramatically graphic t-shirt dresses, set off to one side against a white pillar.

Throughout the collection, the bold uniformity of color and proportion pulls you into the details, a technique that is core to Branquinho’s mode of design. So, at first the prints seem to be natural vistas, but at second glance, you see their nature twisted: a cactus rises out of an ocean and a sunset is juxtaposed with the Milky Way. “Impossible landscapes,” they are meant to appear familiar at first, only to disclose their strangeness at a closer look.

Another pair of dresses conceal phrases in the folds of their skirts: “Wild at Heart” and “Love, Faith and Hope.” For Branquinho, these are not references but pure reflections of a free spirit: “For me, wild at heart is a state of mind. Free, free, free yourself, free your body. So, the lace encrustations, at first you think they are just a nice pattern on the dress, but then you walk and the message appears. The power of a whisper,” she explains.

On the walls there are large black and white images by Ronald Stoops, the photographer who Branquinho has been working with since the beginning of her career. They are new but I seem to recognize them—the girls with long hair in long dresses, striding through the forest.

They resemble the photographs, also by Stoops, that accompanied one of Branquinho’s first collections in the late 90’s. “Back to my roots,” she says, when I remark on this. The presence of these photographs that appear fresh and familiar at the same time brings to the room a certain intimacy—the intimacy of personal conviction that allows the past into the present.

We sit on the terrace to talk. The wind is blowing high from the river and it surrounds our conversation with a steady roar. She has a quiet voice that covers an undertone of intensity. She is wearing a narrow cut navy pantsuit, a soft blouse with an open neck, and tiny, punky hoop earrings. Her rather sharply manicured nails are vamp red. As we talk, I can’t help but notice her speech and gesture. They are animated by a tension I know from her work—a mystery that does not call out its mysteriousness, but diffuses itself in moods, layers, and details.

I ask her first about words, not only about the phrases inlaid in the dresses, but the poetry she incorporated into her autumn collection. “I’m not so good at ornaments,” she says. “I saw this poem I really loved and that for me really captured the essence of the woman I’m designing for. And I wanted to include it, in a way, but I’m not one who wants to have a slogan.” So the verse, found while reading Emily Bronte, was knitted into Fair Isle sweaters, such that at first glance they would appear to bear just the traditional pattern, but at second glance:

The painter, Mark Rothko, appeared with similar subtlety in the Pre-Fall collection. Rather than using the paintings as graphics–“I don’t like just a t-shirt with a print on it, it’s not me”– Branquinho absorbed them into the very structure of the clothes: the fall of a pleat, the slightly rectangular cut of a blouse, or the use of four different yarns to recreate the feeling of Rothko’s brushwork, “where he is very soft with the paint, where he is very clear with the paint.”

The persistent quietness of Branquinho’s work is as much a personal ethic as it is a style, a rare and daring stance to hold in the face of fashion’s demanding fluctuations. I ask what it’s been like to come back to the industry, after a three-year break following the closure of her label in 2009. What has changed?

She mentions the increasingly fast paced rhythm of the seasons and the pressure to produce pre-fall and resort collections, like the one she is showing now. “This collection was a reaction to all that. Why make what everyone expects? Why not make what I feel? This is what has changed in the last ten or fifteen years. There used to be more trust of the designer. People were more open to opposing ideas.”

A woman dashes out onto the terrace, accompanied by Veronique’s PR consultant, who wants to briefly introduce her. She is wearing a tight black leather sheath and a turban over her hair. Huge sunglasses. “It’s just a fabulous collection,” she gushes between breathless air kisses, “It’s what every woman wants to wear!” The moment is perfect– in its cliché, the interruption of fashion, its insistence on what everyone wants, just as Branquinho is talking about swimming upstream.

I walk home avoiding a ripped up stretch of sidewalk and another fresh-forming skeleton of scaffolding. I think about the words “freedom” and “mystery” and what they mean for identity and appearance at a moment when everybody is frantically constructing themselves through calculated social exposure.

Later that night, I read about the wildness of Emily Bronte and the way it was coupled in her person with a profound quiet and reserve. Wild at Heart: it’s a kind of refusal, really, a refusal to be anything but true. “I wouldn’t like to lie to myself,” Branquinho said, at the very end. “These are the things that are important to me and I want to do them in the best possible way.”
_______
VB portrait by Serge Leblon
All other photography by Ronald Stoops
Makeup by Inge Grognard

Megan Huston is a PhD candidate in Anthropology at Columbia University where she is completing her dissertation on fashion as a philosophy of history. She has taught at Columbia, NYU, and Parsons the New School for Design.