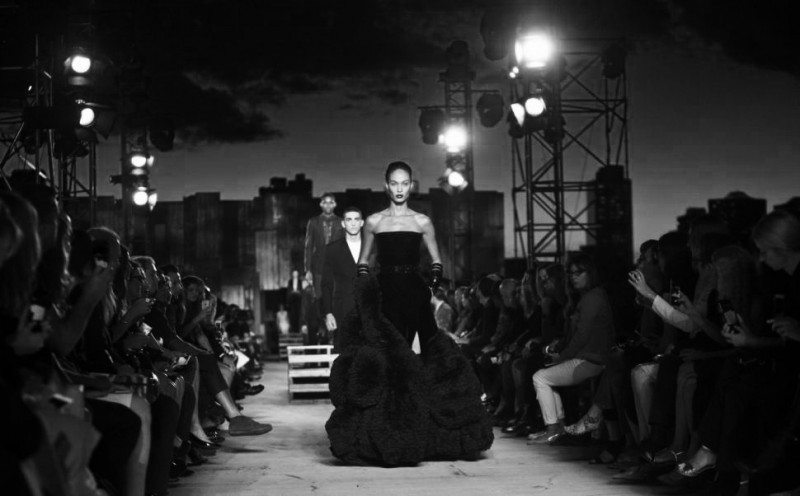 Last week marked the fourteenth anniversary of 9/11, a tragedy that radically changed the political landscape of the world. There were memorial services held in New York and across the United States.

The Givenchy Spring/Summer 2016 show was another unlikely place where 9/11 was invoked. The show was held at a pier in South Manhattan with a view of the new Freedom Tower, and was art-directed by Marina Abramovic. The presentation was supposed to pay respects to 9/11 and celebrate the spirit of human unity. The entire thing – from having an Italian designer who works for a Parisian house preaching to New Yorkers to Givenchy offering special guests tours of the 9/11 memorial – was tone-deaf, if not insulting. There was not a shred of the political in the clothes he presented, making the show’s art direction even more jarring as mere trappings.

The above fiasco is hardly surprising, because when fashion gets political – identity politics excepting – it usually produces cringe-worthy results.

Last year for its Spring/Summer 2015 ready-to-wear show Chanel staged a pseudo-feminist protest. For its Grand Palais set, Lagerfeld constructed a fake Parisian street block, in homage to the venerable tradition of Parisians protesting in the street. Models, fake humans for the purposes of the show, were holding fake signs, shouting fake slogans into megaphones. The most fake thing about the show, of course, was its supposed avowal of feminism.

“My mother was very much a feminist and I thought it was something right for the moment,” Lagerfeld told Fashionista. “I couldn’t care less if people are for or against. It’s my idea. I like the idea of feminism being something light-hearted, not a truck driver for the feminist movement.”

And there is the rub. Feminism is not light-hearted, and neither are politics in general. These are serious issues that affect people’s lives, and fashion, by its nature, is simply in no position to address, let alone solve these issues. Moreover, by co-opting the language and symbols of political movements they create an illusion of action, of effecting change, lulling people into believing they are doing something meaningful, when in reality they are doing nothing of the sort.

Fashion is frivolous by nature. By and large it is characterized by transience and, as Lagerfeld rightly pointed out, light-heartedness. This can be dispiriting in its pomp and circumstance, but it can also be refreshing, because it is something we can turn to when we are tired of being exposed to the constant political crises of the contemporary world courtesy of the 24-hour news cycle. In realizing our inability to do anything meaningful about these crises, we only feel guilty. And contrary to what our many moralizing societal forces maintain, no compassionate, morally conscious human being can feel guilty twenty-four hours a day. As a matter of fact, such a person needs respite precisely in order to keep her morality intact, in order not to become numb to the constant barrage of guilt. And that’s where fashion, if that is your interest, as it is mine, comes in. Its preoccupation with things that do not carry the weight of politics is a welcome diversion. This does not mean that fashion is uninteresting, but simply that its interest lies elsewhere.

Fashion has long played second fiddle to art, and art has long been thought of as capable of political impact. Perhaps this is where fashion designers got the idea that attaching political import to their work can be a way of expressing creativity and of putting a bit of meaning into what otherwise are a bunch of cocktail dresses and handbags. Fair enough. Some of the finest moments in the history of contemporary fashion, like the Raf Simons Spring/Summer 2002 show, with its young male models being wrapped in scarves and carrying torches looked like political statements. But, on further reflection, this show was not about politics per se, but about alienated youth. Its impact was cultural, not political.

The history of art certainly has no lack of political expression, from the paintings of Goya depicting Napoleonic slaughter to those of Otto Dix showing the horrors of World War I. But did their work have any real political impact? Hardly. In his book Culture of Complaint the art critic Robert Hughes rightly noted that though Picasso’s “Guernica” is undoubtedly a great work of art, it has not stopped a single shot during the Spanish Civil War. And whenever art was used for political purposes by dictators, it quickly stopped being art and devolved into kitsch or propaganda.

Again, by its nature, fashion, for all its creativity, is not as potent as art, simply because the designer’s tools are severely limited. There is only so much you can express with fabric, thread, and scissors. Even with a fashion show, the semiannual chance to make a statement, a designer can only go so far. There is a high risk of being misinterpreted. Alexander McQueen’s Fall/Winter 1995 show, “Highland Rape,” was about the subjugation of the Scotts by the English. But to many critics it looked like he was glorifying rape. “It is McQueen’s brand of misogynistic absurdity that gives fashion a bad name,” wrote Sally Brampton in the Guardian.

At the end of the day fashion designers are in the business of selling expensive clothes to well-off people. You can emblazon your garments with slogans and images all you want, but your message, even if it is heartfelt and genuine, is ultimately futile. What’s more, it can quickly become laughable. When Jean-Charles de Castelbajac put a portrait of Obama on a dress and Sonia Rykiel put his name on a sweater, the Telegraph classified both under “tacky Barack Obama memorabilia,” and rightfully so.

This is not to say that fashion is entirely facile. The mistake most people make is one of building a binary world – if whatever you are doing is not serious, this means you are not serious. But the world is more complicated than that. Just because fashion is apolitical, does not mean it’s anti-political. Fashion can be frivolous and fun without it necessarily being shallow and infantile. But by attempting to be political fashion makes itself into a fraud and turns away attention from political problems by creating an illusion that putting a few models on the runway with signs or scrabbling a slogan on a t-shirt it can engender political change. Instead, it does disservice to both fashion and politics.

Karl Marx once wrote that history repeats itself, first time as tragedy, second time as farce. Fashion is farcical enough without engaging politics. It’s high time fashion and politics got a divorce.