I began to follow Vervoordt’s work, coming across his art gallery booths at Frieze in London and the Armory show in New York, reading articles about his interior design and real estate projects. His work popped up in the interiors of architects I respect, like the minimalist Vincent Van Duysen, and in interviews with the likes of Rick Owens. Our worlds were inevitably intersecting.

I was struck by the aesthetic coherence with which Vervoordt wove the East and the West, the old and the new, together, teasing out continuity and universality from seemingly disparate spheres. There is an earthiness to everything Vervoordt does, to how he puts things together, the Lucio Fontana painting – whose work he’s been collecting for over twenty years – next to Gutai art, next to a washed linen chair of his own design, next to a beautifully aging farmhouse table from Japan.

Vervoordt is, of course, one of those rare people who have the resources to realize his vision. He owns the real estate he likes, which he can morph, furnish, and accessorize to his taste, and finish it with the art he champions.

Though Vervoordt is well-know in the interior design world, when we recently spoke on the phone he told me that art, from the newly rediscovered ZERO group, to Lucio Fontana, to Gutai and others, still constitutes about eighty to ninety percent of his business. “I love discovering great artists before others, ones that I know will be considered great again ten years from now,” he said. “But the art I love is never dogmatic – it has to be minimal, humble, warm, and serene.”

Vervoordt certainly also has the power to make such artists. It is no coincidence that the German mid-century art collective, the ZERO group, is now being rediscovered and that the long overlooked Japanese Gutai movement is gaining recognition.

Vervoordt’s many celebrity clients put almost blind faith into him. When Robert De Niro tapped Vervoordt to design the penthouse of the Greenwich hotel in New York that rents for thousands of dollars a night, he made it look like a Japanese farmhouse, its luxury was so subtle that you’d have to have deep knowledge of materials and art to understand it all. And yet, according to Vervoordt, De Niro was moved when he saw the final result.

No matter how famous the client, Vervoordt will work with them only if they can relate to his aesthetic worldview. His goal is to give new perspective to their environment, and ultimately to their lives. “I’m like a portraitist – people rediscover themselves,” he told me.

Though he refused to define his approach to interior design and art purely in aesthetic terms, Vervoordt was never shy to talk about values that drive his vision. “Nothing that I touch is merely decorative,” he said. “It has to have a soul, silence, and space.”

When earlier this year I was visiting Belgium, the product designer Michael Verheyden offered to arrange a tour of Vervoordt’s private residency (it’s a castle), and his most ambitious real estate project to date, the Kanaal.

We drove some twenty minutes from Antwerp to the sprawling Kanaal, a serious of buildings that was a former distillery that Vervoordt bought some years ago and is now busy converting into an office and apartment complex that will also house the Vervoordt Foundation museum. That part is still under construction, but the main office of Vervoordt’s company is already operational.

There are also plenty of rooms that house Vervoordt’s collection of art, objects, and furniture. Wondering through the maze of these rooms is a transporting experience – you do feel “soul, silence, and space.”

Vervoordt’s leitmotif of combining his favorites recurred – there was a Lucio Fontana painting, opposite one by Tsuyoshi Maekawa, the oversized chairs made in Vervoordt’s atelier and farmhouse furniture. Everywhere, the textures led the way – each groove, each crack, and each wavelike wooden surface seemed to matter. “I look for things that are impossible to repeat,” Vervoordt told me. “I follow the material. I am its servant.”

Vervoordt’s channeled eclecticism is even more apparent in his home. The castle, where Vervoordt lives when he does not travel, is comprised of two main buildings – the main one is Vervoordt’s living quarters and the adjacent is where a lot of work gets done.

On the castle’s grounds are also Vervoordt’s horses and the workshop where all of his furniture is made. “I started making furniture because I could not find what I wanted,” Vervoordt told me. The materials range from industrially produced wood to one of a kind found 600-year old Japanese maple.

In the main building, where Vervoordt resides, the amalgam of styles follows from room to room. There are traditional European rooms – with redwood carved furniture, Flemish painting, and heavy chandeliers, which might be followed by a room that is positively Spartan in its wabi-sabi minimalism – unadorned, unpolished wooden floor, unpainted walls, an old trunk, a chair and a fire place.

The last room on the top floor is Vervoordt’s personal sanctuary, and that is where the essence of wabi-sabi resides. Just a raised wooden platform from raw stone floor, circumscribed by a row of cushions and two large, weathered vases that took me back to that book that drew me into Vervoordt’s world.

_________
All photography by Eugene Rabkin and may not be reproduced without expressed permission. 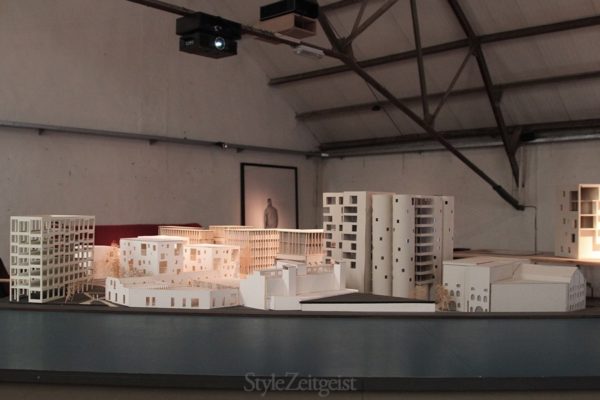 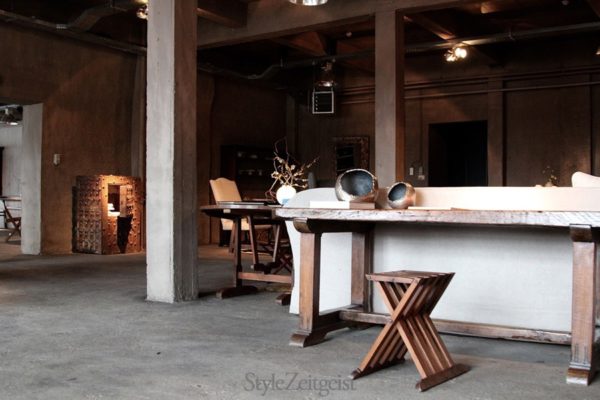 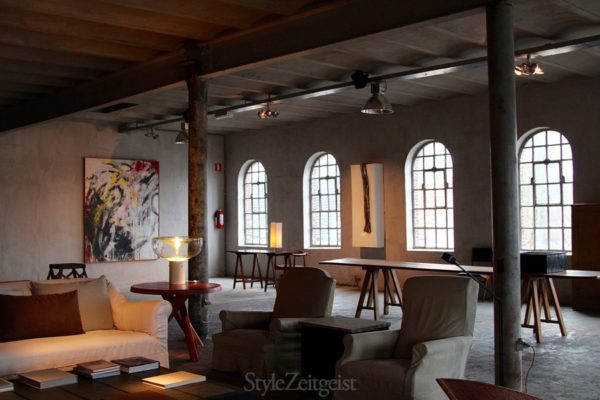 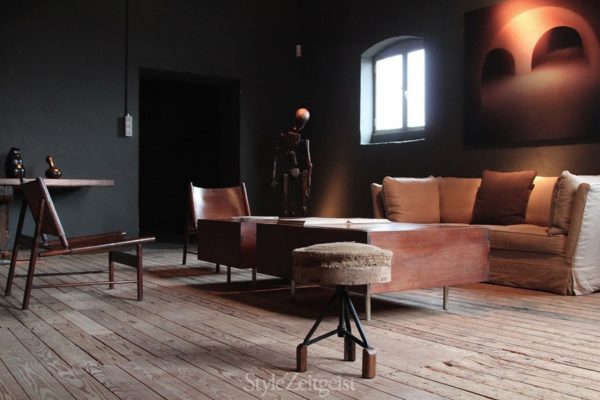 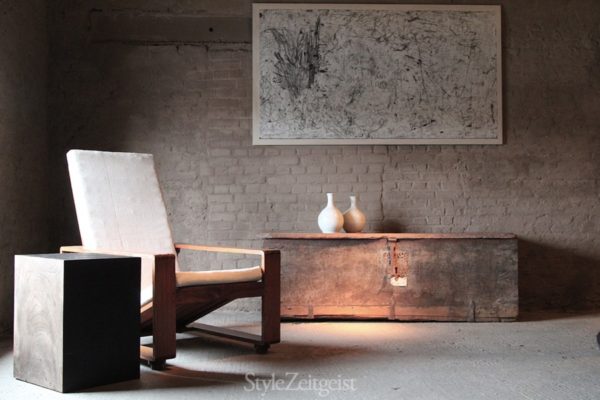 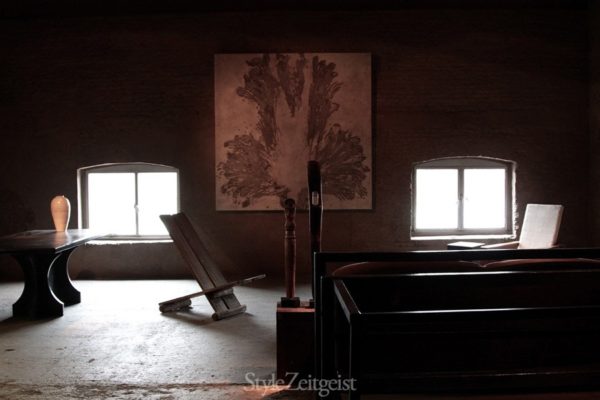 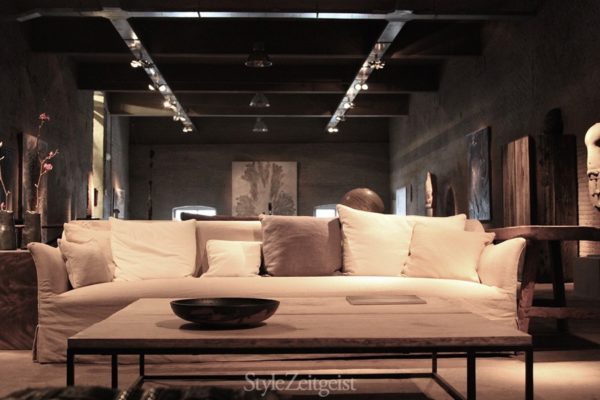 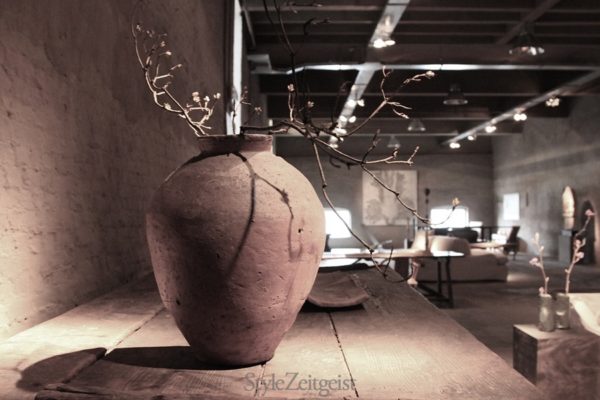 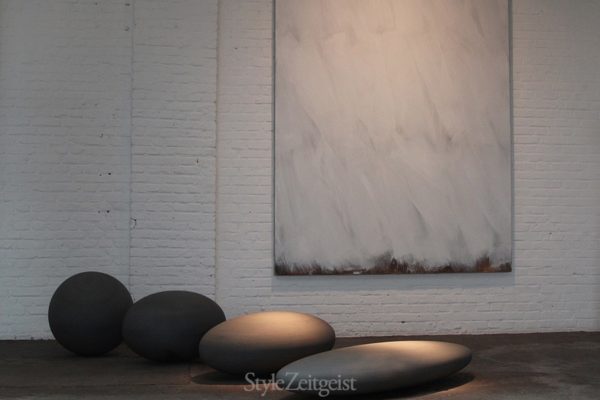 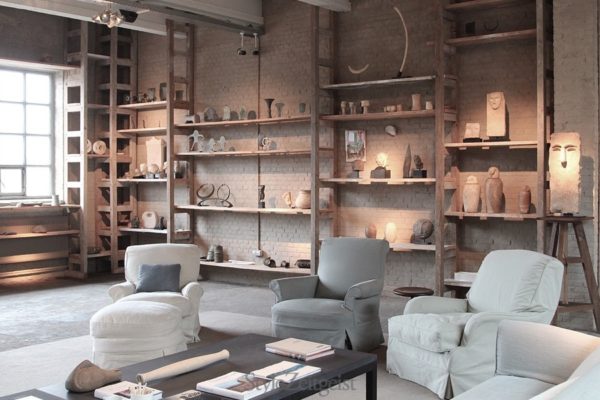 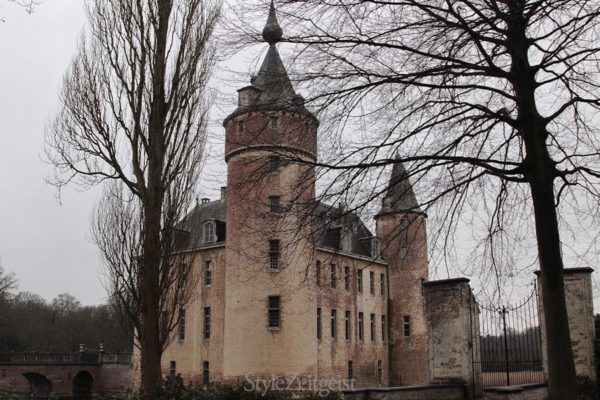 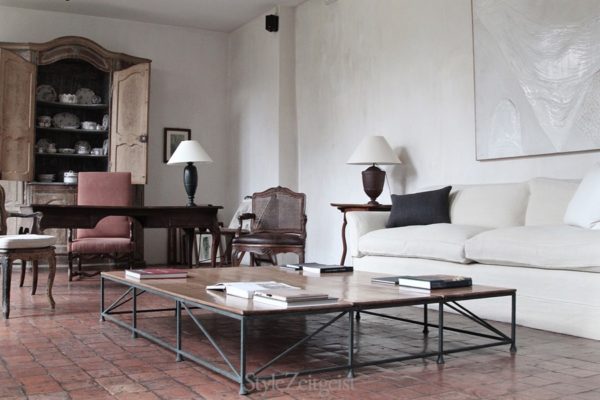 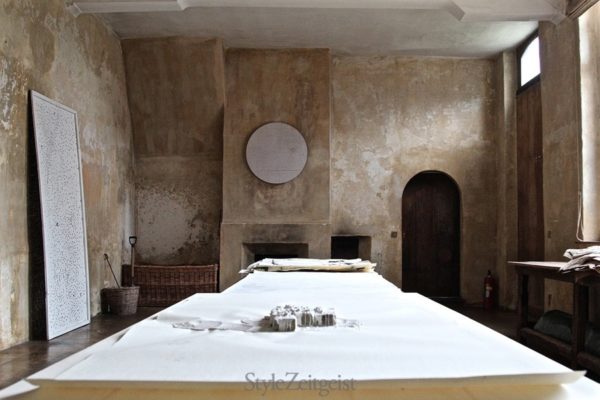 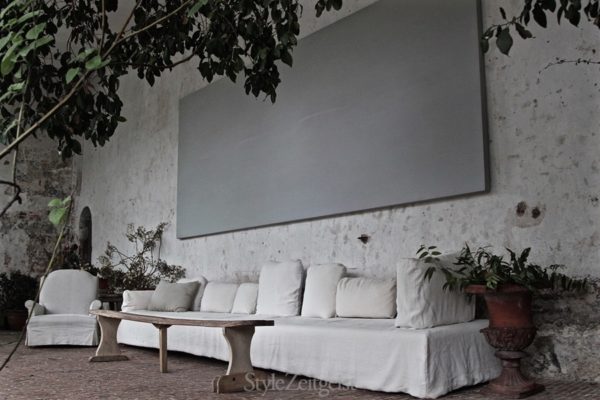 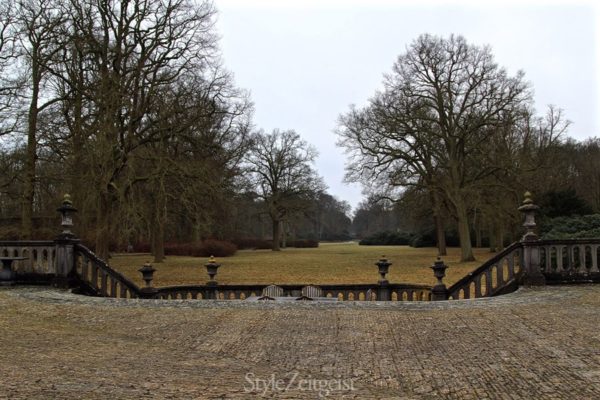 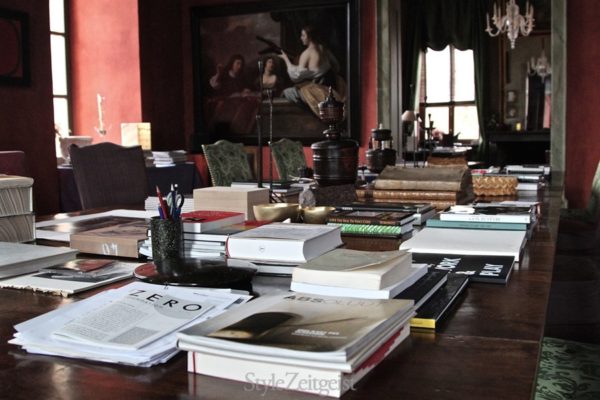 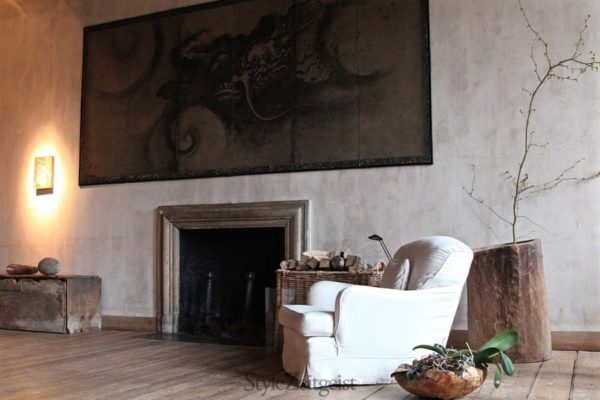 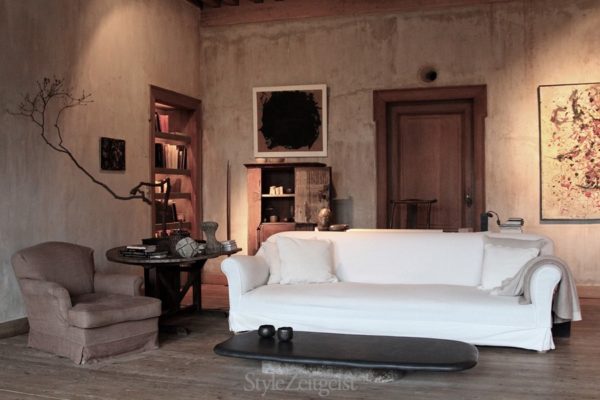 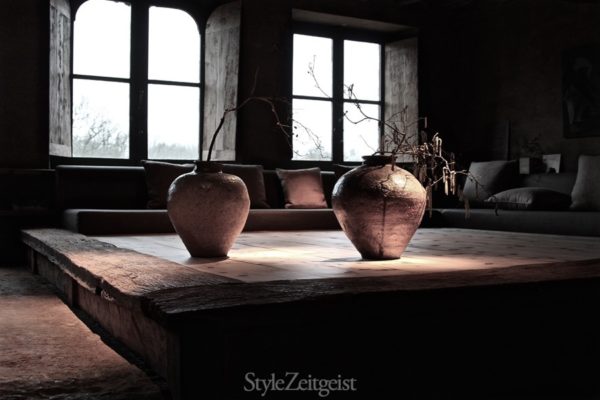 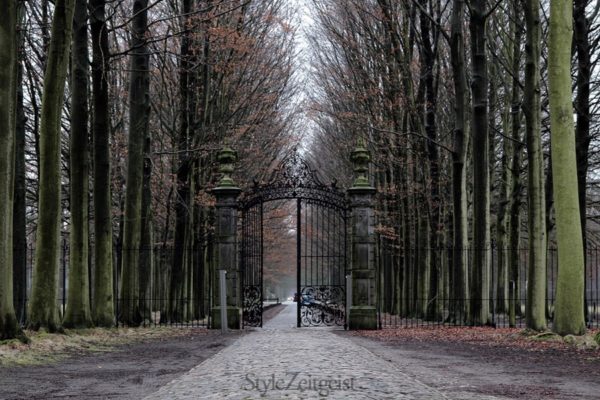