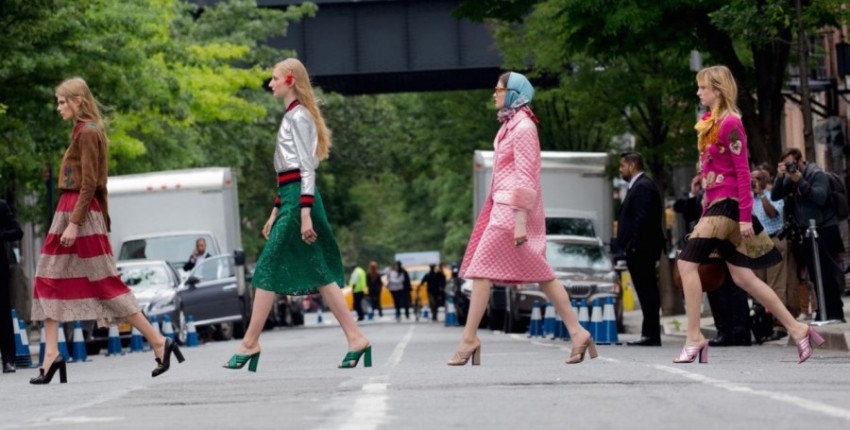 This year is drawing to a close and a lot has happened in fashion, most of it not so good. I am not talking about the departed: Raf Simons from Dior (good for him), Alexander Wang from Balenciaga (good riddance), and Alber Elbaz from Lanvin (good lord!).

I am talking about the arrivistes: namely, Gucci under Alessandro Michele and Vetements under Demna Gvasalia. And not just about them, but about the reaction on the part of the fashion media to their work.

These two brands under these two designers have been the most critically acclaimed developments of 2015. The adulation that has been bestowed on them by fashion journalists has been bewildering. I am not talking about fashion magazine editors whose job it is to like everything and whom no one takes seriously anymore. I am talking about that rare breed of writers who still have a modicum of critical thinking left in them.

Now, Gucci and Vetements are two different beasts. Gucci is part of Kering, a huge fashion conglomerate with serious marketing muscle and a honed PR machine. Kering has mastered the careful engineering of a brand turnaround, most prominently by bringing Hedi Slimane to Saint-Laurent in order to, in one critic’s words, make dumb clothes for the world full of dumb people. The transformation was so phenomenally successful that it came no surprise that the floundering Gucci was next.

And so it happened that Frida Giannini was fired and Alessandro Michele, the designer who worked under her, pushed forward. Which is fine – sometimes fashion houses need a shakeup. This time though Kering opted out of hiring a prissy star designer and relied on their marketing power to ramp up the hype machine. And it worked splendidly. Cowed by Kering’s advertising power, fashion editors lined up to praise a resort collection of ugly grandma gear presented in New York as a pre-collection. More inexplicable were praises bestowed on the collection by major fashion critics. Could it really be that fur-lined slippers are the best thing that happened in fashion this year?

I hate to be uncharitable towards my colleagues, but I think one reason for the overwhelming pile of praise they bestowed on Michele’s mediocre collection was the fact that they were flown in to New York at Gucci’s expense. Fashion journalists are underpaid, but are supposed to lead fabulous lifestyles. Increasingly, a handful of houses that can afford to do so, stage pre-collection shows in far-flung locales, shuttled editors to and fro in business class, put them up in posh hotels, and wine and dine them, all on the house. It’s hard to write a negative review after that, an act of ungratefulness of sorts.

Unlike Gucci, Vetements is presented as fashion’s underdog, a bunch of scrappy talented young designers schooled in Antwerp, the cradle of fashion’s creativity, and reared at Margiela, the king of the fashion avant-garde, and who are taking on the bloated, boring fashion system with their unconventional, cerebral designs. I thought their first two collections were interesting, though they presented nothing that Margiela has not done already many years ago. Still, it felt relatively fresh in the new-is-the-well-forgotten-old kind of way.

Sadly, Vetements is getting boring quickly and the hype surrounding them is not helping. You can only do so much with reworked clothes. There is something missing here, a continuity of direction. Maybe the time and place is not right for continuous rehashing, or maybe the label is quickly getting bogged down in a one-trick-pony mentality, but Vetements lacks the depth of Margiela’s thinking, along with his ability to turn what could be seen as mere tricks into something lasting.

The hype around Vetements has reached its pinnacle earlier this year when Demna Gvasalia, the head of the collective, was hired to helm Balenciaga (Kering strikes again). And though it is obviously a classic case of Kering jumping on the hype bandwagon, the fashion press dialed-up ebullience to the n-th degree. Alexander Fury, usually an insightful and brilliant critic, wrote not one but two gushing articles in the Independent about the appointment, claiming in one that Gvasalia’s appointment is “triumph of design over marketing hype.”

What’s going on here? Are the fashion critics simply this gullible, easy to please, and cowardly in the face of potential advertisers? In part, yes. (Example: Remember that Louis Vuitton art foundation building in Paris roundly praised by fashion critics? Well, it was roundly disparaged by art critics, whose magazines don’t depend on LVMH advertising.)

But I don’t think it’s that simple. Intelligent, opinionated fashion writers still exist, though fewer and farther between. Part of the story is that the fashion industry has let them down. We have more designers than ever, but less interesting design. Stylists, celebrities, and children and wives of rich people are all designers now. It’s the new glam thing to do. And, unlike music or sports, it requires no discernable skills because they can hire a design team to do the actual work. As Hussein Chalayan, designer par excellence, told the journal Vestoj, “We’re suffering from a design overdose right now. Being a designer has become fashionable. I don’t know any other business where a rich man’s wife can employ a team to work for her and declare that she’s a designer with no prior training. It cheapens our industry.”

Indeed, it does. In such a climate, fashion critics will grasp at straws just to stay positive. And Gucci and Vetements have one big fat straw to prevent the poor fashion critic’s brains from drowning in mediocrity. The name of that straw is quirkiness. What unites Gucci and Vetements is that their collections are quirky. Which is fine, again, but there is one problem with quirkiness. Like irony, it has a short shelf life. It can only be a feature, an appendage, but not the main thing. Michele at Gucci may ride it for a few more seasons. With Vetements it’s already beginning to look tired.

But fashion journalists seem to confuse quirkiness with genuine talent. Quirkiness hits the right buttons – it seems cerebral and humorous and therefore worth thinking about. And it is, but only to a point, and that point is not that far from mere surface.

Again, it’s hard to blame fashion critics, when we have Saint-Laurent crammed down our throats on daily basis. Who wouldn’t praise anything resembling talent in such a climate?

So, here is a New Year’s resolution for you. Dear fashion industry, gives us something worth praising. Dear fashion critics, don’t squander your writing talent on cheap thrills/frills. You don’t have to go to Gucci for that, a thrift store will do.