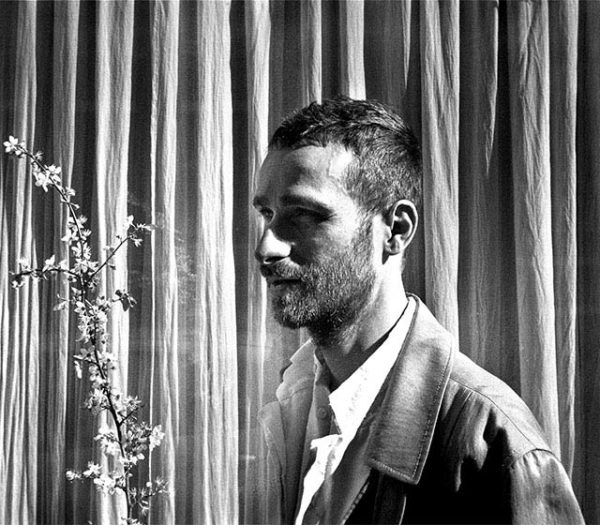 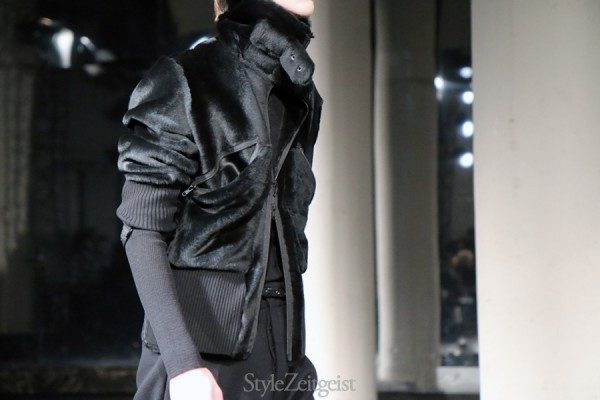 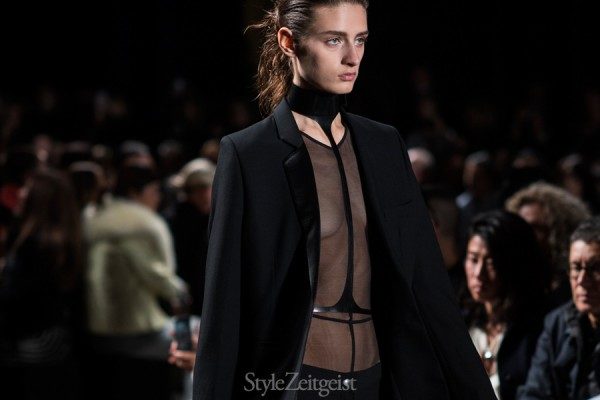 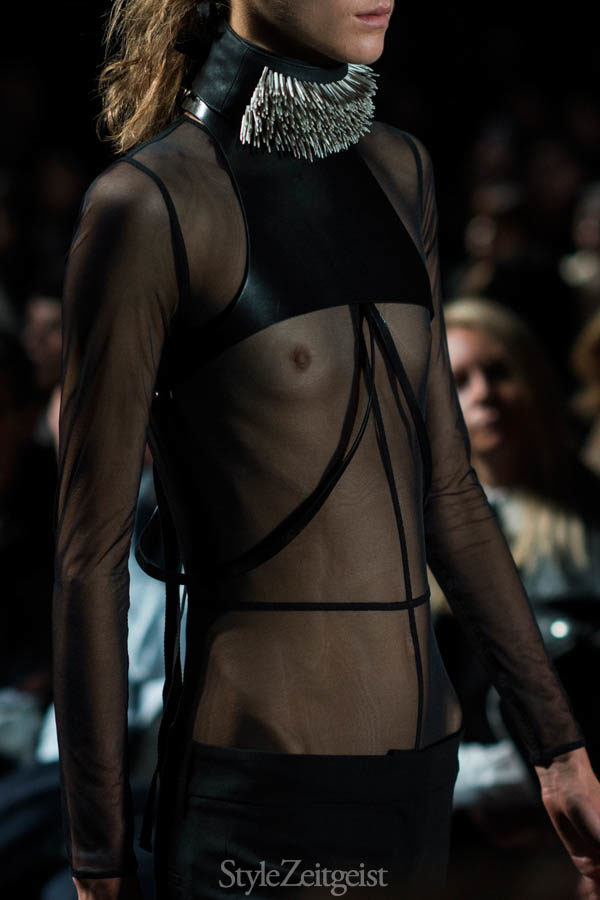 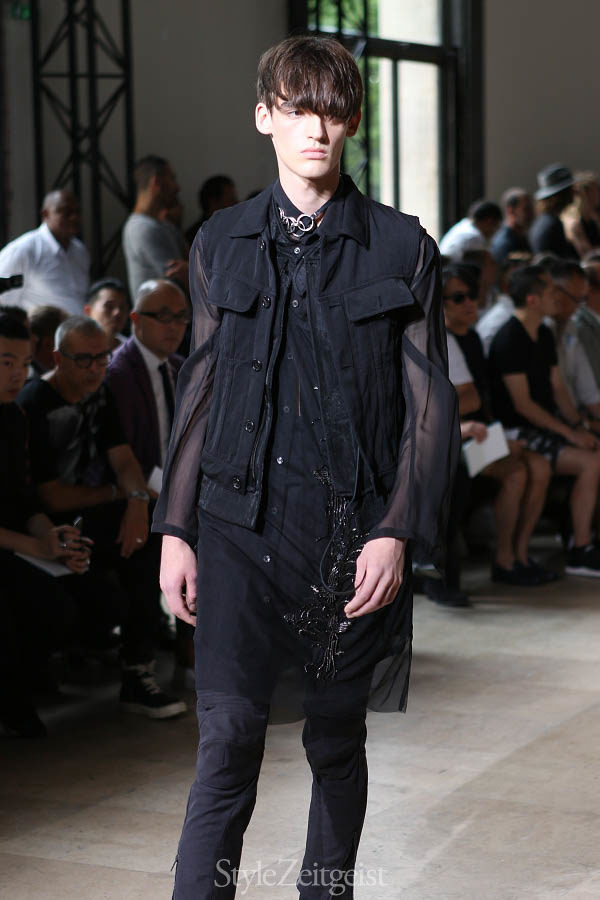 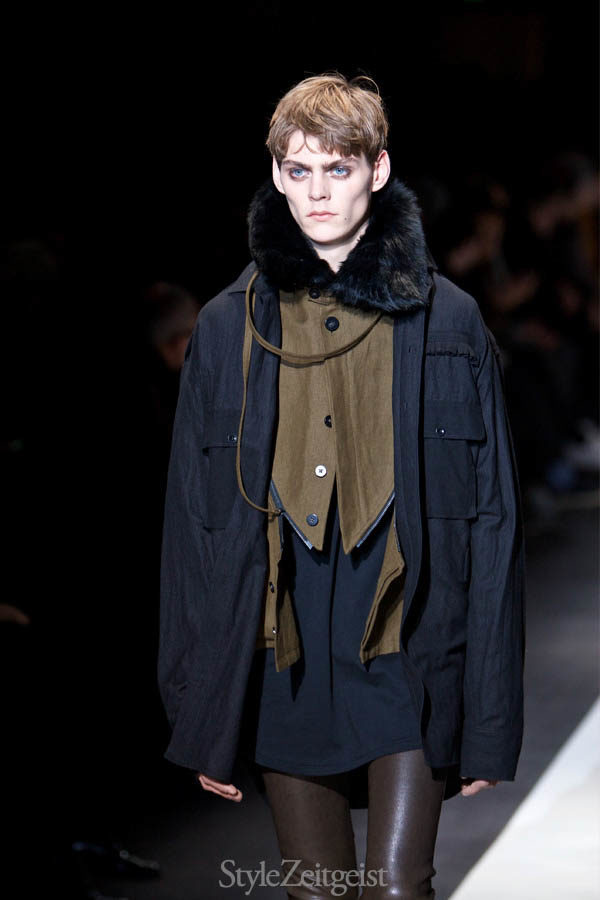 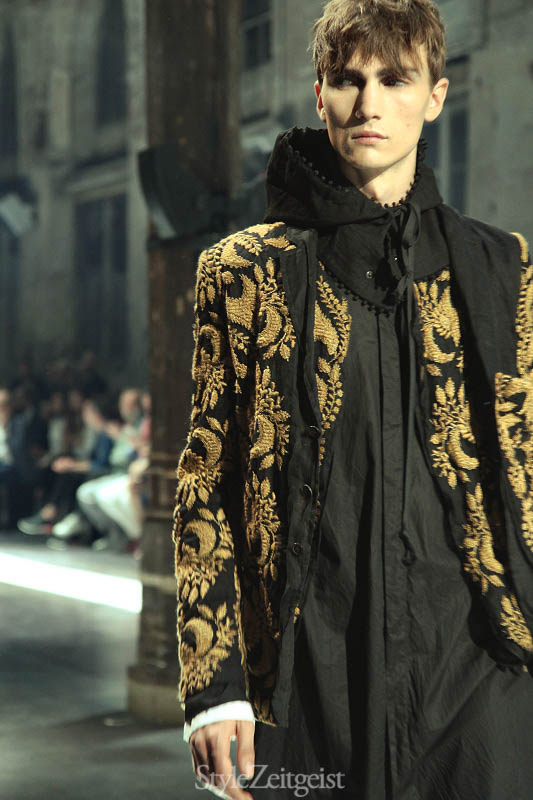 A little over two years ago Ann Demeulemeester announced her retirement from her signature label. After the initial shock subsided, the question of succession inevitably came up. That’s when Sebastian Meunier, a Parisian designer who has had a long tenure at Margiela before joining Ann Demeulemeester, stepped out of the shadows.

Meunier spent two years at the label before Demeulemeester’s departure and has worked closely with her. But the big question remained; how could anyone fill the shoes of a designer whose style was so clear and who was so inextricably linked to her label? In other words, could there be Ann Demeulemeester without Ann Demeulemeester?

Meunier’s taking over the brand looked seamless enough at first, but gradually he has gone beyond merely putting his own touches on the brand. This past men’s show was the boldest departure from Demeulemeester’s signature monochrome, rock’n’roll-infused designs. It was full of color, plaid, and silhouettes that seemed like a definitive break with Demeulemeester’s aesthetic.

Many fans were not amused. And yet, it is clear to Meunier that the label needs to find new fans, even while risking alienating the old ones. Doing this, while realizing his own creative vision was on Meunier’s mind as we spoke at Café Charlot, a favorite Parisian fashion-crowd haunt, a couple of days after the men’s show.

Let’s begin at the beginning. How did you get into fashion?

I am originally from Versailles, and I studied fashion at ESMOD in Paris. My work has been selected by the Hyeres festival, where I won the main prize in 1998. After the festival, the Parisian designer Jean Colonna asked me to work for him. I did not stay long there, because I wanted to do my own collection, which I showed in Paris for a year. In the meantime, in 2000, I was hired by Martin Margiela to work as a knitwear designer for his women’s line. They liked what I did, and I ended up spending ten years there. I started on the women’s and then moved over to the men’s.

And how did the move to Ann Demeulemeester happen?

It happened in 2010. At the time Ann Demeulemeester was looking for a designer to help her with the men’s line, and she was familiar with my work at Margiela, so she contacted me.

I met with her and her husband in Antwerp and we spent the whole day together. I was still in Antwerp, waiting for my train back to Paris, half an hour after our interview, when Ann called me on my cell phone and said that they would like to hire me. I immediately said yes.

It was a good time for me to make the move, because I had been working at Margiela for ten years, and I felt like I accomplished all I could there. I finished my last men’s collection for Margiela, and the day after the show I quit.

I worked with Ann for two years, before the day she invited me to dinner and told me that she would be retiring and that she wanted me to take over the women’s line as well. It has definitely been a learning process.

Was it scary or exciting for you to step out of Ann’s shadow and take a bow at the end of the show?

It was both exciting but also very…quiet. I try not to think too much about it. I work day-to-day – designing is what I concentrate my mind on. If I start thinking about all the people who are waiting behind the curtain, I get frightened. I would rather block it out.

The first time I had to take a bow was actually when we were at the Ann Demeulemeester store opening in China. Ann was technically not with the company anymore, but she worked with Patrick, her husband, on the design of the Shanghai shop. We worked together because she was doing the shop, but I was the one who had to take a bow after the show we did for the store opening. I had to do the interviews. All the journalists asked me if I was stressed. And then I was stressed.

Ann Demeulemeester is a clearly defined label aesthetically, and it has a hardcore following. Did you feel the weight of responsibility to stay true to Ann’s vision?

That’s a very tricky thing, for sure. The brand’s fans want it to always stay the same. Honestly, I think today it’s quite impossible. You cannot constantly redo what was done by someone else. That’s really hard.

What unites Ann and me is that we are both romantics. But, I have to think about what I want as a designer. I still do some romantic clothes, but I design them my way, and the elements are not the same. The dark, black poet, it’s not me.

Also, fashion moves fast. What was good twenty years ago may not be good for today. I have to take the company forward. Of course I don’t want to lose old fans of the brand, but they can only stay if they want. Ann’s fans are very sensitive and I respect that.

The first two seasons after I took over the women’s line I started quietly. I respect Ann a lot, so I began to make changes step by step. But I also have to show that I am here and that I have my own artistic vision. I trust my instincts, and of course I need to be happy with myself and with my work. I cannot do something that I will not enjoy, something that is not me.

I always start with fabric. I also have in my head the beginning of the process, the idea. I am the kind of designer who does not like to be tense when making a collection. I draw ideas from my own life, from love and lovers, from friends.

I don’t have lasting influences, the way Ann does. I love some artists, of course, and I reference them, but I am not a fan. It’s about my own thinking and living. Inspiration is in my gut feeling, and it can come at any moment. I start to investigate a certain story, a certain piece of art or whatever. When I have that down, I see how I can use the fabrics. That is when a collection starts to become concrete. Then, keeping the fabric in mind I quickly start to sketch. I am very specific about that because I can sketch the collection in one week. I become obsessed.

How did the idea for the men’s collection you just showed come about?

It was inspired by the Bernini statue of Apollo and Daphne. I was with my friend at the Palazzo Borghese in Rome, and we were right in front of the statute and that is when it hit me that I want to do a collection about that myth. It is such a beautiful and tragic story. Apollo is in love with Daphne because he is pierced by Cupid’s arrow. Daphne does not want his love, because she is pierced by an arrow with an opposite effect. It’s not their fault.

And again, it reminded me of my own life. I don’t fall in love easily, but when I am in love, I am deeply in love. In the end, I like to express romanticism, regardless of whether it concerns men or women.

Going forward, what do you hope for?

I want to have the ability to realize my creative ideas within this company. It’s as simple as that. This is my work, to convince everyone. To be myself.