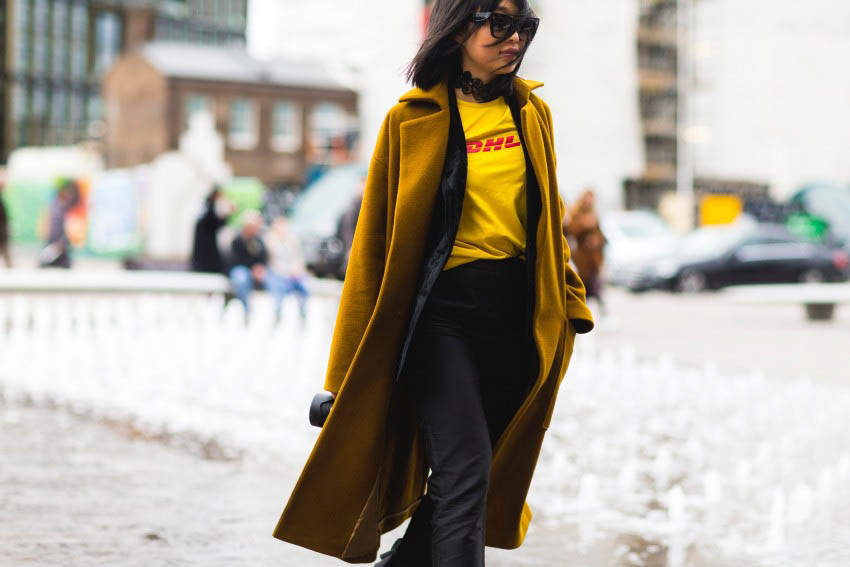 Photo by Nabile Quenum of JAIPERDUMAVESTE

What we are witnessing is the rise of the fashion hipster – a new consumer class that in its self-image and purchasing habits is not driven by the notion of luxury but by characteristics normally associated with hipsterism – irony, camp, and insider humor. They are as self-conscious in their status markers as the Veblenian leisure class, but their status is not stamped with the Chanel logo on cashmere, but with “Vetements” in Champion font on sweatshirts. And they have the disposable income to buy designer fashion, at least on the lower end of its price spectrum.

The two labels that are capitalizing on this new consumer class most are Vetements and Gosha Rubchinsky. In their first collection, presented merely two years ago, Vetements did not have a single logoed garment. The label was well received by the fashion press, but few people could afford their deconstructed jeans at $1,400.

A year later, however, the Vetements offerings contained two items of note, the cut up Antwerp t-shirt that you could buy (as they did) in any souvenir shop in that city for ten euros (retail price on the Vetements version – $225), and an oversized raincoat that resembled the ones security personnel wears at stadiums. Instead of “SECURITY” it said “VETEMENTS” and it retailed for $185. The two items sold out in the matter of weeks.

Their relatively low price allowed young people to buy into the hot new brand. The jacket has all the characteristics for fashion hipster appeal – it is instantly recognizable to the selected few through the logo, signaling that you belong to the well-informed in-club at the forefront of fashion, but signaling nothing to the masses. It possesses a sense of irony – it is a security jacket but not. And it has an element of campy humor – it’s so bad that it’s good.

Vetements quickly realized they were onto something and their next collections were full of items with logo appropriation, that of Champion, the American sweatshirt maker, Everlast, the maker of boxing gear, and DHL, the shipping company, just to name a few. These were not intellectual, because that’s too hard to digest, but quirky. “Irony is [the] draw. If you haven’t quite honed yours to Jane Austen wattage, then how about wearing that DHL t-shirt? And telling everyone you bought it first,” commented Lisa Armstrong, the fashion director of The Daily Telegraph.

On the runway, the DHL t-shirt was modeled by none other than Gosha Rubchinsky, who in his own label mines post-Soviet nostalgia of the 90s. One of his bestsellers is a sweatshirt that appropriates the Tommy Hilfiger flag, only now with “GOSHA RUBCHINSKY” on it. Since I am also a product of the post-Soviet youth, let me help you trace this circle of irony – the Tommy Hilfiger flag would have been copied on the fake sweatshirts in Russia for the kids who could not afford a real one, and subsequently put on the runway by Rubchinsky, only now as real fashion to be consumed by the hip Westerners.

What Rubchinsky does is interesting in a way the brand operates. It has all the markers of a fully-fledged fashion brand – the backing of Comme des Garcons, which produces and distributes the collection, and a runway show in Paris. This June he will be the guest designer at Pitti Uomo, the Florentine men’s trade fair that firmly keeps its pulse on the fashion zeitgeist. But his prices are approachable – his t-shirts sell for around $75, which allows young people to buy into the brand. Unsurprisingly, they routinely sell out at shops like the Dover Street Market in New York and Union in Los Angeles. “It’s a very good fit here,” said Chris Gibbs, the owner of Union. “Our store walks the line between streetwear and fashion, and Gosha does the same. We often sell out.”

In addition to hitting all the right cultural notes, what Gvasalia and Rubchinsky also have in common is a kind of exoticism that hipsters love. Both hail from the former Soviet Union. Both are approachable but remote enough from the mainstream.

There are a couple of things worth noting about the rise of the fashion hipster. First, because information travels fast, the fashion hipster is a global phenomenon, no longer confined to the East End and Brooklyn. Several weeks ago, by happenstance, I rented out my parents’ apartment for a photo shoot for GQ China. They were looking for a post-Soviet nostalgia theme, and it was all about Vetements and Rubchinsky. At SVMOSCOW, a prominent Moscow boutique for the local fashion cognoscenti, Vetements is the top-selling label.

Second is that fashion hipsterism is not entirely innocent and not without socio-political connotations. One must tread carefully with logo appropriation. The Vetements security raincoat and the DHL t-shirt are appropriated from the lower middle class, whose members usually live from hand-to-mouth. What does it say about fashion when the Vetements DHL t-shirts retail at $350? Armstrong writes in the Daily Telegraph, “Previously worn by workers on low wages, they’re now a fashion insider’s status marker, having been talked up, with zero irony, as a rebellious response to the corporate greed sucking the creativity out of fashion.”

Lastly, fashion hipsters tend to move on in their tastes quickly – they have to, so as to be ahead of the masses – and therein lays the danger. Vetements started out as a promising brand with an interesting concept, infusing fresh energy into fashion. But, it could quickly become the flavor of the day, because of logo fatigue and because today’s masses follow the cognoscenti fast (see the GQ China reference above). Remember Hood By Air? Two years ago it was all over the streets of New York and used as bait for street style photographers during fashion weeks. Today, not so much. And, during this past Paris fashion week the street-style photographers were already talking about dumping their Vetements on eBay.