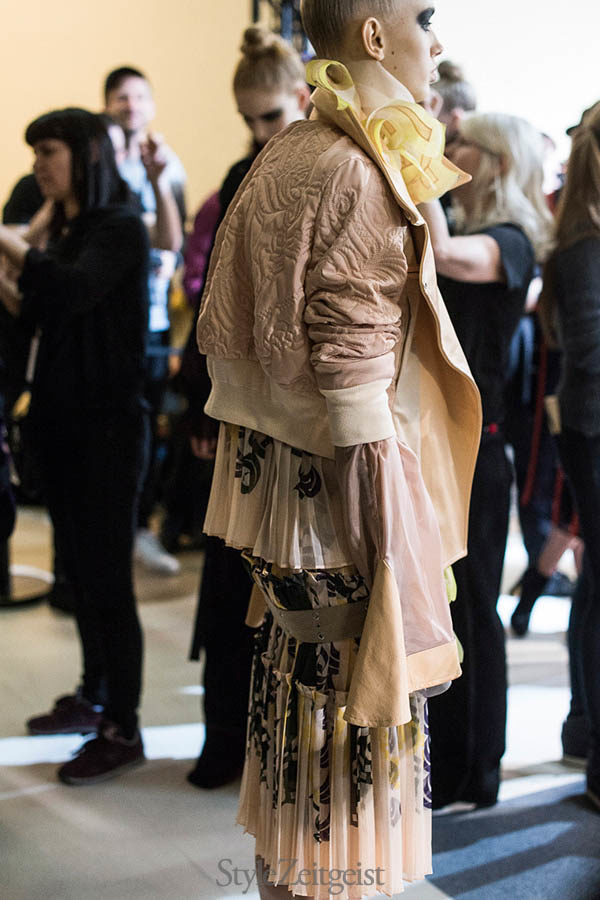 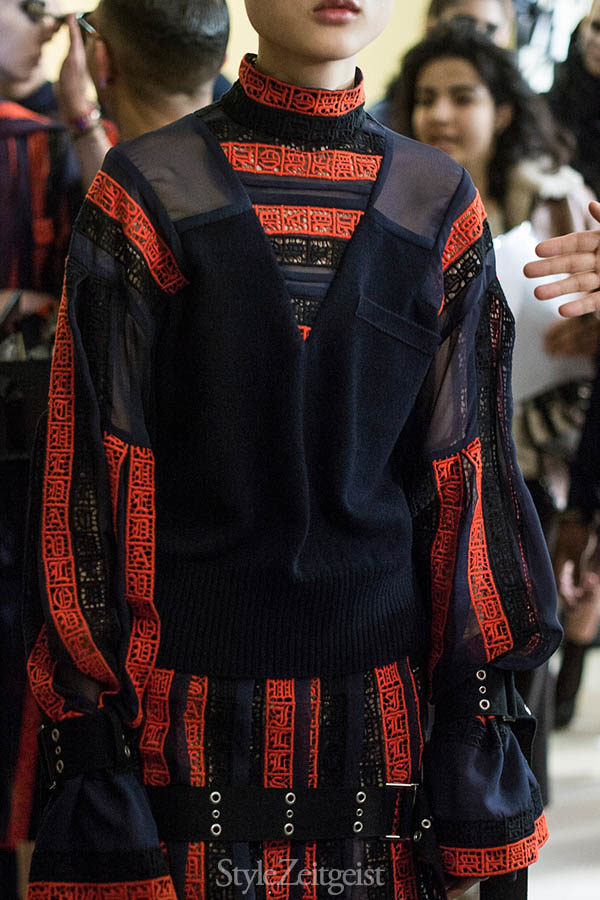 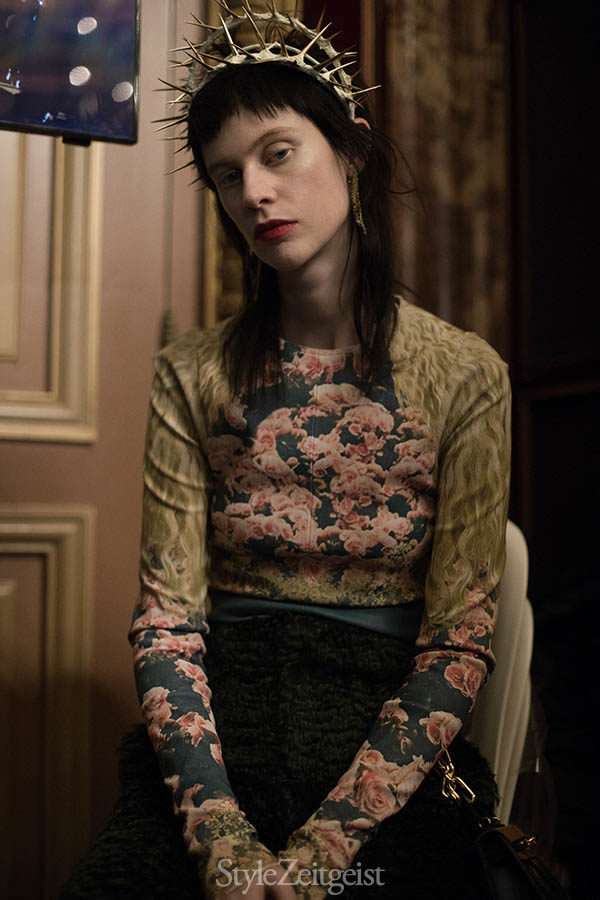 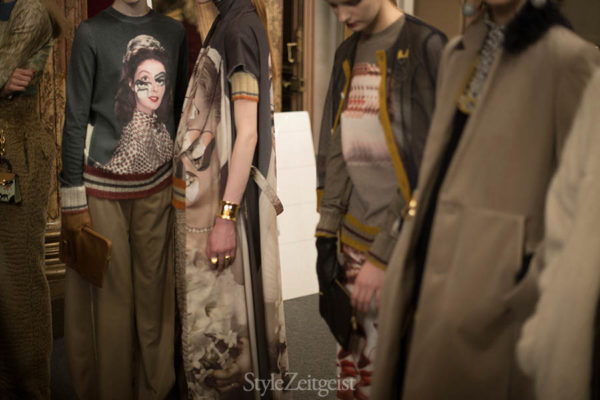 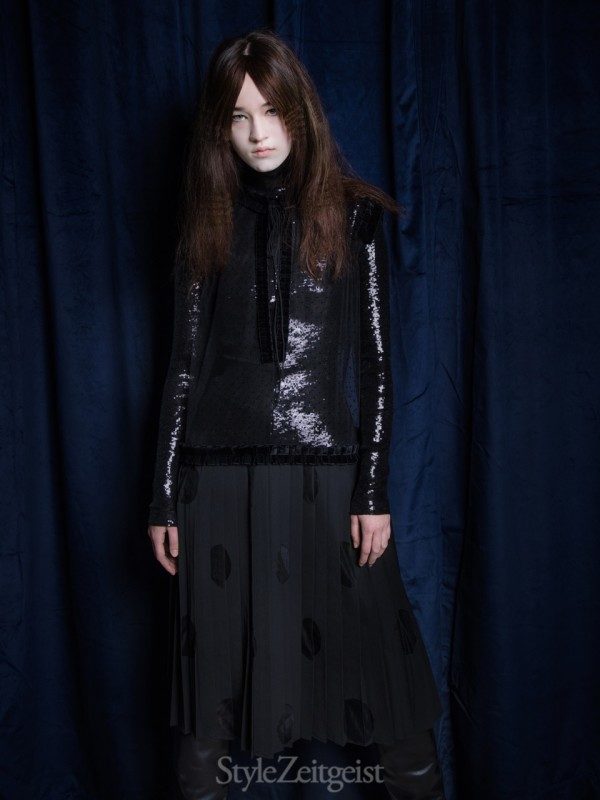 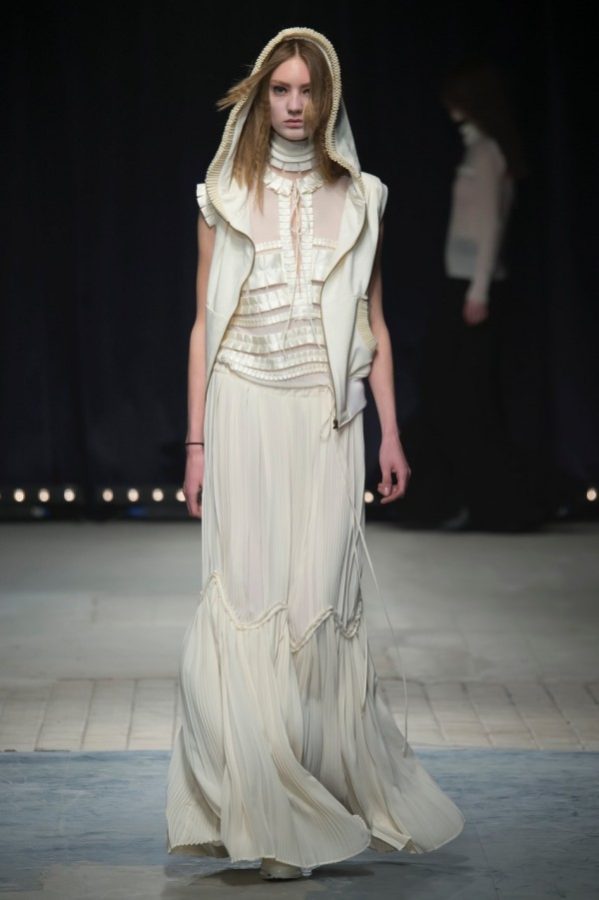 I landed in time to catch the Undercover show – my first – and it was a worthy premier. Held in the ballroom of the Westin hotel, it was as sumptuous as shows go. Titled “Perfect Day”, after the Lou Reed song, it was all about comfort – a kind of lazy Sunday rendered in furry mohair, cat prints, and lush oversized coats. There were models of all ages – from the young to the 38-year old Hannelore Knuts to the lady that was in her 60s (if not 70s). The show’s embrace of age was touching, but Takahashi’s talent for the surreal made real was the thing that drove the show. He is a true auteur, one of the few left in fashion – and by auteur, I don’t mean a tyrant like Hedi Slimane, but a creator capable of building an aesthetic universe that is uniquely his own.

Speaking of auteurs, later that day Yohji Yamamoto presented a show that was so calm and assured that it has quieted the audience into a kind of a serenity a true master can transport you into. Some say that Yamamoto has lost his pulse on the hand of fashion. I say, good riddance. The man is certainly no weather vane.

If you are into the wind currents of fashion though, as I am professionally obliged to be, you would’ve heard the word “Vetements” repeated ad nauseaum. Its influence is inescapable, for better or worse. Well, for worse. Vetements began as a good idea – its first collection felt fresh, though it owed obvious debt to Martin Margiela. There was nary a logo in sight. But the fashion hipsters have jumped on it following the label’s embrace by the fashion media. Fast-forward mere three seasons and what Vetements presented on the runway was a barrage of logoed sweatshirts and tees. Before you object, let me define what a logo is in the age of Instagram – any immediately recognized, hashtag-friendly graphic design that can be adapted by a group of people. Gvasalia saw the writing on the wall, took it down, and put it on sweatshirts. Vetements may make some interesting clothes, but all I see are those idiotic security jackets with the name’s label on the back and $650 printed sweatshirts. And, yes, the winner of the season was the one girl who wore the $350 Vetements t-shirt with the DHL logo on it to the Iris van Herpen show.

Gvasalia’s debut at Balenciaga was no better, and its sycophantic embrace by the fashion media even worse. With one stroke Gvasalia took down the edifice of elegance that Ghesquiere has built and that Alexander Wang was too timid (or lazy) to touch. The show was a mix of Tootsie-on-acid office gear and blatant Margiela references with a bit of Comme des Garcons thrown in. Oh, and there were ski jackets. At Balenciaga. And if you did not like that, let me tell you what you did not see – those ski jackets had “BALENCIAGA” stitched in big letters on the back of the collar. Guess what will be the best-seller when this collection hits the stores?

In the spirit of full disclosure, I did not go to see the Balenciaga show and I don’t like basing my judgement on full-frontal runway photos alone, because they can be misleading. But, I did go to the Balenciaga showroom. Things looked a bit better there, but not by much. I did realize though that part of the runway fiasco was Lotta Volkova’s subpar styling. Those jackets and coats that were falling off the shoulder actually looked good when completely closed. The trick was an ingenious zipper placement, and it looked first-Vetements-collection interesting once fully zipped. There were also intricately constructed trench coats and shearling jackets. And there was plenty of logoed filler.

I believe that Gvasalia’s intention is to do to Balenciaga what Slimane has done at Saint-Laurent – take a venerable luxury house, tear it down, and dish it out to younger audience that cannot relate to gabardine and cashmere, but love their ironic denim. The thing about Gvasalia is that he decidedly speaks to the young audience at this point, a young audience that has enough disposable income for luxury-level-pricing cool.

Ok, now that the above is happily out of the way, I can go back to shows in chronological order (more or less), because the next day morning my first show was Junya Watanabe. It was full of three-dimensional manic lego construction, and it’s hard to get behind this approach that Watanabe has taken lately. It’s becoming less and less relatable. It’s neither wearable enough nor crazy enough, and I feel like a designer would find more success doing either. I fear if Watanabe continues in this vein, he might end up like Hussein Chalayan.

Watanabe’s godmother, Rei Kawakubo, seems to understand this well, because later on that day she sent down a collection of batshit crazy outfits that one could not even categorize as clothing. Cintra Wilson once described Comme des Garcons as “post-reason,” and I doubt anyone will ever provide a better definition. Whatever we saw was definitely that, and it was glorious in its disregard for anything anyone thinks. Kawakubo loves challenging accepted notions, and this time she seemed to be taking on a friend of mine who once remarked that wearability is a state of mind. I believe that state of mind has limits and Comme des Garcons has reached them.

I consistently feel bad for the buyers that have to stock Comme des Garcons and Watanabe, but at the showroom for both designers the runway madness was successfully translated into things non-Iris-Apfels of this world can don. It was especially satisfying at Comme des Garcons, where those gorgeous rose prints were smeared with black and rendered on coats and smoking jackets.

And then there was the still little-known Noir by Kei Ninomiya collection, where the young designer continues his gravity and logic defying experiments with construction. Kawakubo has not given him his own show just yet, but I am sure she will in the near future. He’s worth it.

In-between Watanabe and CdC there was also Haider Ackermann, whose show, like most of his shows, was all about luxe and sex. Ackermann’s unapologetic stance on what fashion is for – to get you into bed – somehow seemed honest amidst a lot of hot air that has permeated Paris. No one else has done this so convincingly since Tom Ford ended his Gucci tenure, but Ackermann’s take on sex is much more seducing in its lushness.

Monday morning I found myself reminded at Sacai why I love fashion. Chitose Abe’s show was nothing short of thrilling. Her talent for combining materials and colors is undeniable. I’ve always liked it, though in the past it often veered into “kawaii” territory. With the last winter’s collection Abe began to toughen up, and this time she absolutely invigorated her collection with bondage straps, high collars, and just the right amount of asymmetry. The result was absolutely stunning. It was the kind of clothes that make you stop dead in your tracks.

I was still under Sacai’s spell when later on that day I attended the Veronique Branquinho show, which only lifted my spirits higher. Set to a thundering Nick Cave soundtrack, the long, flowing silhouettes straight out of fairy tales showed on languid models was quintessential Branquinho, a return to form since her return to fashion.

My fashion week ended with the show of Iris van Herpen. It was a grand finale for a few reasons, not least of all because the Dutch designer always reminds me that there are still creators out there who are serious about the transcendental and the sublime. Her intricately constructed dresses were awe-inspiring. One was made of five thousand small 3D printed pieces, all sewn by hand. It is this kind of uncompromising work that brings fashion close to art. You can keep your logoed sweatshirts.