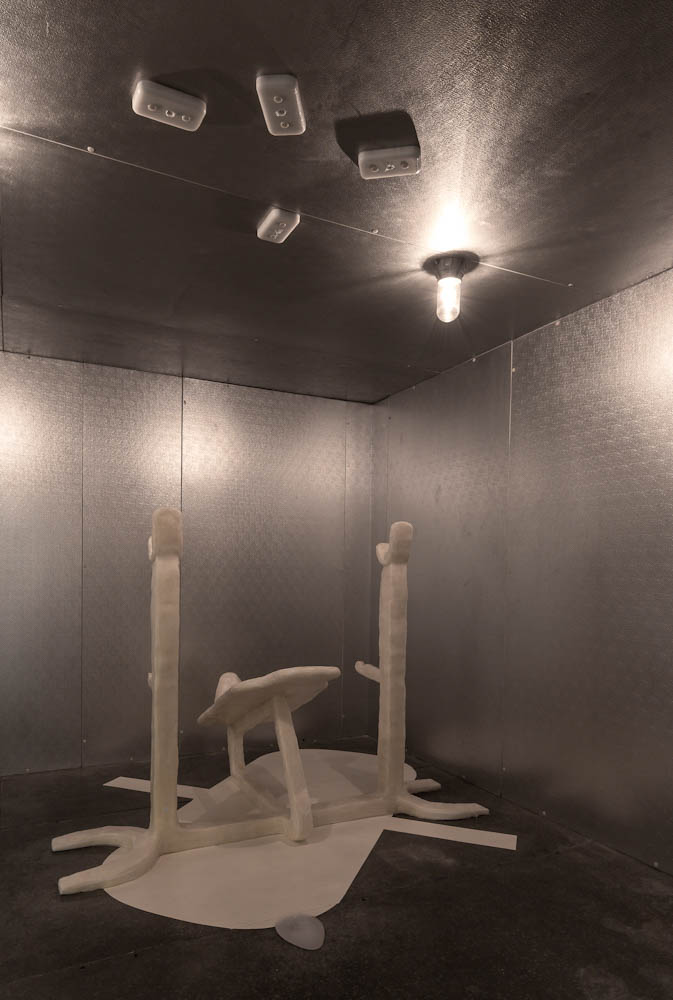 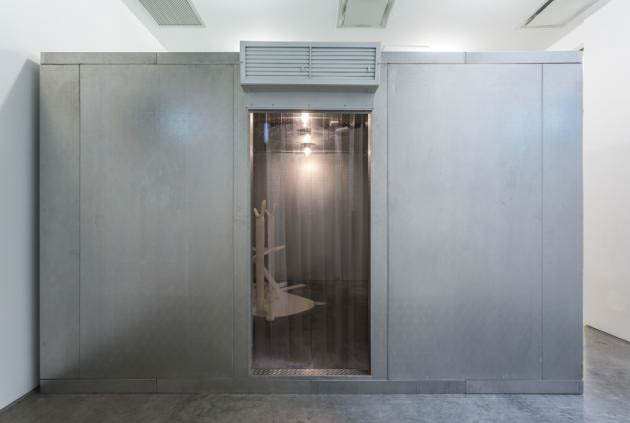 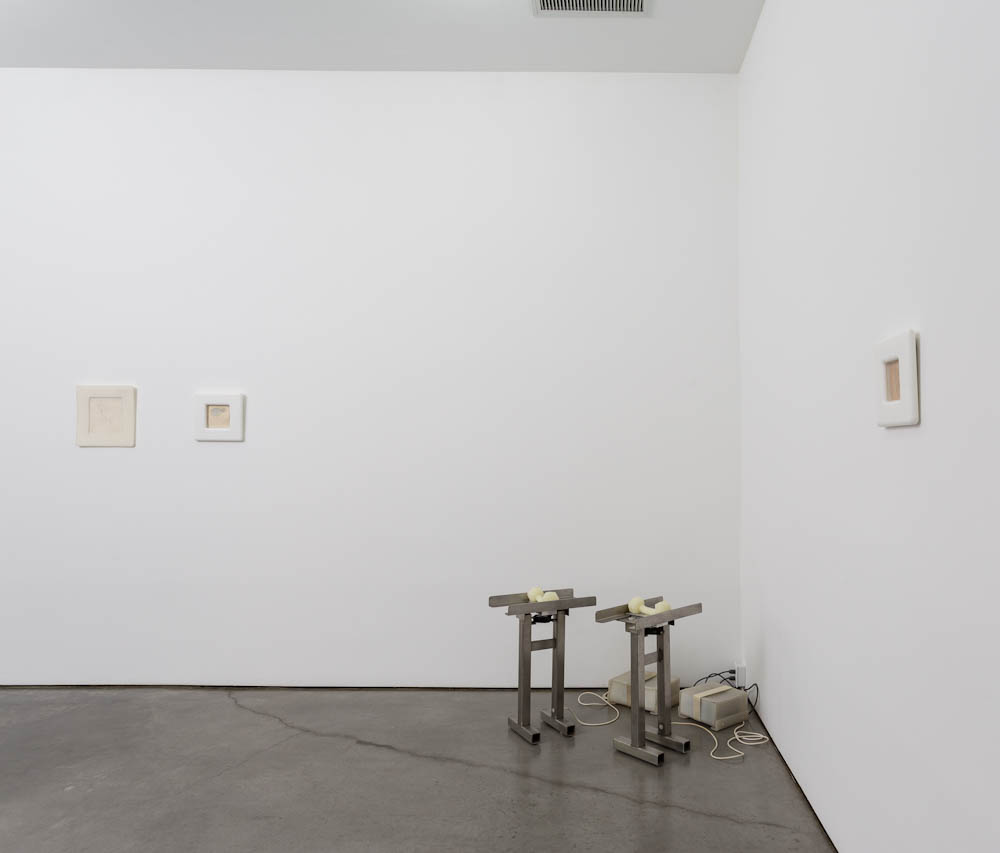 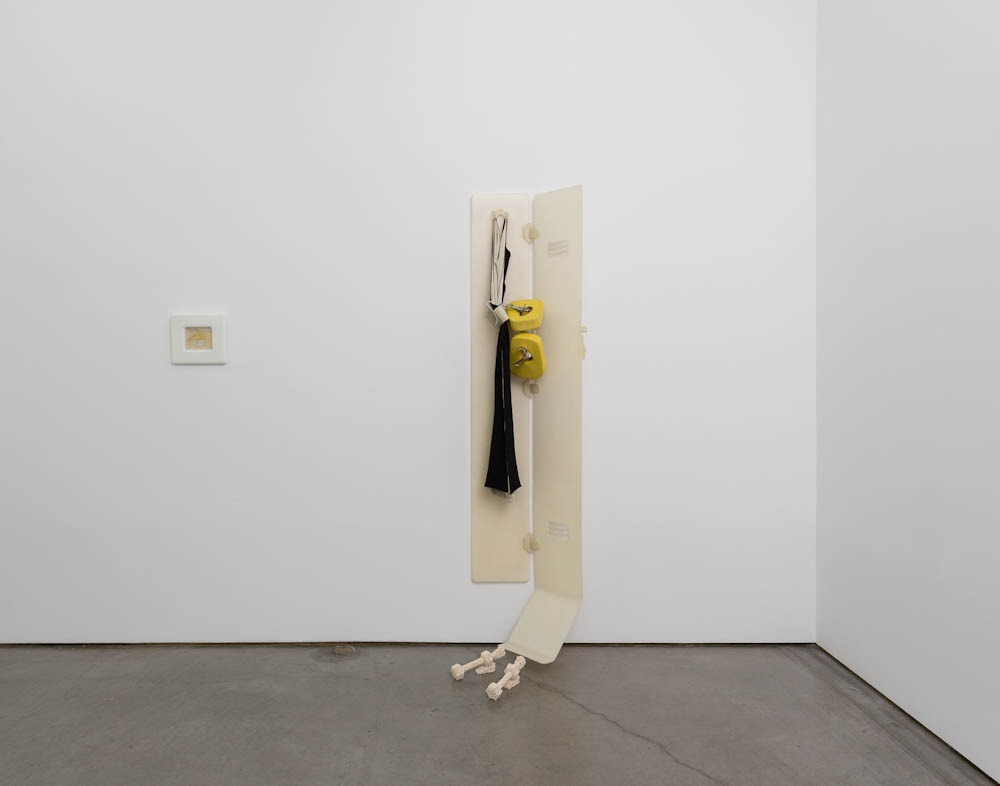 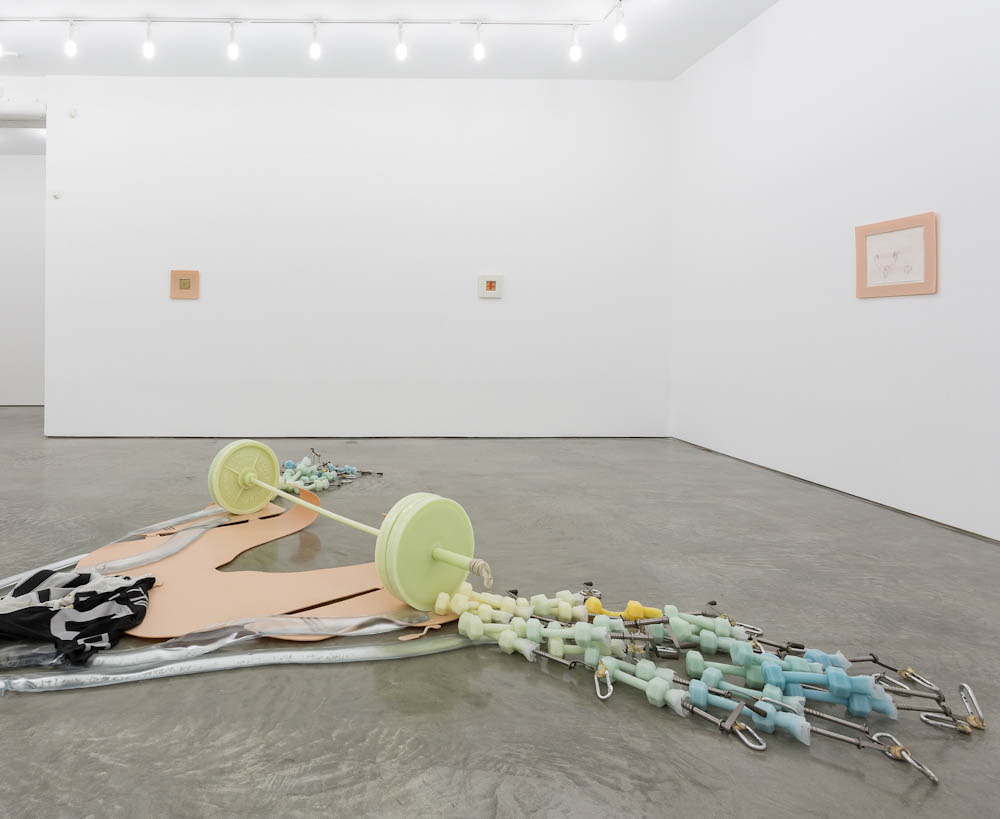 Facility of DECLINE at Gladstone Gallery reunites installations, sculptures, videos and drawings from Matthew Barney’s 1991 New York debut from when the gallery was on Greene Street in SoHo for the first time in twenty-five years.

Per the gallery, the presentation “mirrors the original moment, but does not replicate it.” Based on the years of exposure to Barney’s film works and given the vintage and premise of this show, you might expect it to come off as static and predictable but you’d be wrong: it comes off as fresh and, like a horror movie, bypasses the intellect and goes to the gut. It is strange, the petroleum jelly, prosthetic plastic, tapioca, cast sucrose and the menacing vibe conjured up by the weaving of Harry Houdini, Oakland Raider Jim Otto and the amorphous, menacing anatomy lab/locker room vibe.

The installation incorporates along the ceiling and walls the climbing grips that Barney used during his now famous three-hour, naked climb up and along the original gallery’s ceiling and walls. By virtue of the use of the gallery ceiling in addition to the floor and walls the gallery space comes off as charged and enveloping in a way that feels entirely appropriate to the intent of the work though no less weird for that.

Individually installed, it’s questionable whether each of the sculptures, installations, videos or drawings would hit as hard. For example, I could see coasting past a couple of Barney’s petroleum dumbbells dutifully installed in a greatest hits museum procession after spending a minute with them and the wall text But en masse, the effect is creepy and the pieces together hum.

Even though we know we know to what heights Barney’s artistic career attained after his debut, Roberta Smith’s October 1991 New York Times review readily captures, still, the feeling of walking through this show:

“Taken one at a time, his objects can seem rather ordinary and sometimes unresolved, despite their odd materials and suggestive implements. It’s hard to know quite what to make of big wedges of molded uncooked tapioca or glucose, a blocking sled (used in football training) from which hangs a huge specially made chunk of yellow and white candy, or a glass case containing twisted eight-pound dumbbells made of wax, metal mouthguards and a gynecological speculum.”

“Yet,” she continues, “there’s a fully dimensional quality to the interaction of video, object and actual space that goes beyond Mr. Barney’s 70’s influences. Ultimately, the gallery itself becomes a kind of body that the artist moves through, like an enzyme in the digestive tract or an infant being born. Mr. Barney’s work takes wild swings between the obscure and the sensational, but it has already outlined an unusually rich arena in which to act.”

It’s all there and still as contemporary and befuddling as it was twenty-five years ago.

And, though I did not get to flip through it, the exhibition is accompanied by “Matthew Barney: OTTO Trilogy,” a publication probably worth serious consideration that traces three of Barney’s early projects:  Facility of INCLINE, Facility of DECLINE, and OTTOshaft.

All images courtesy of the artist and Gladstone Gallery.