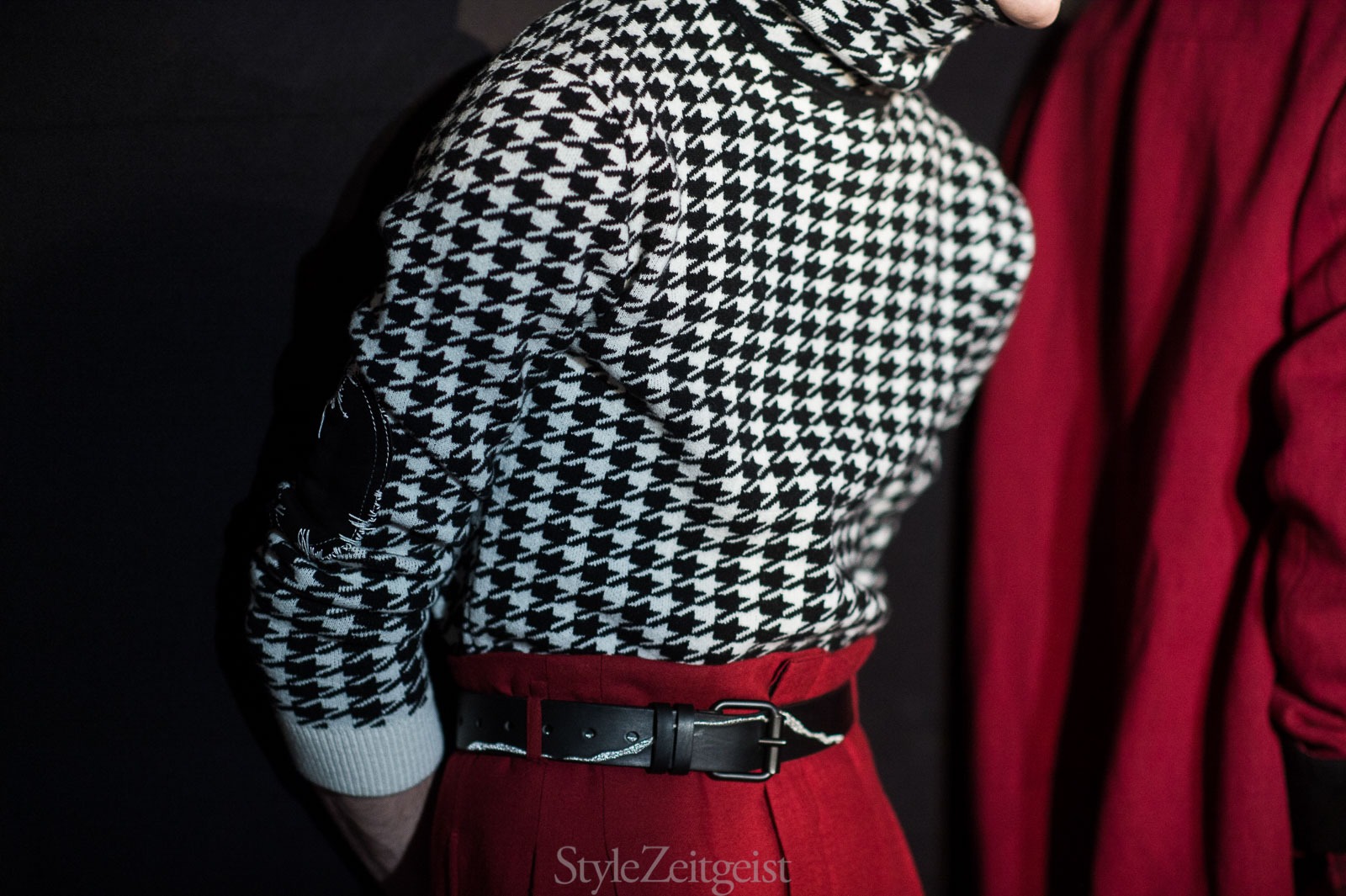 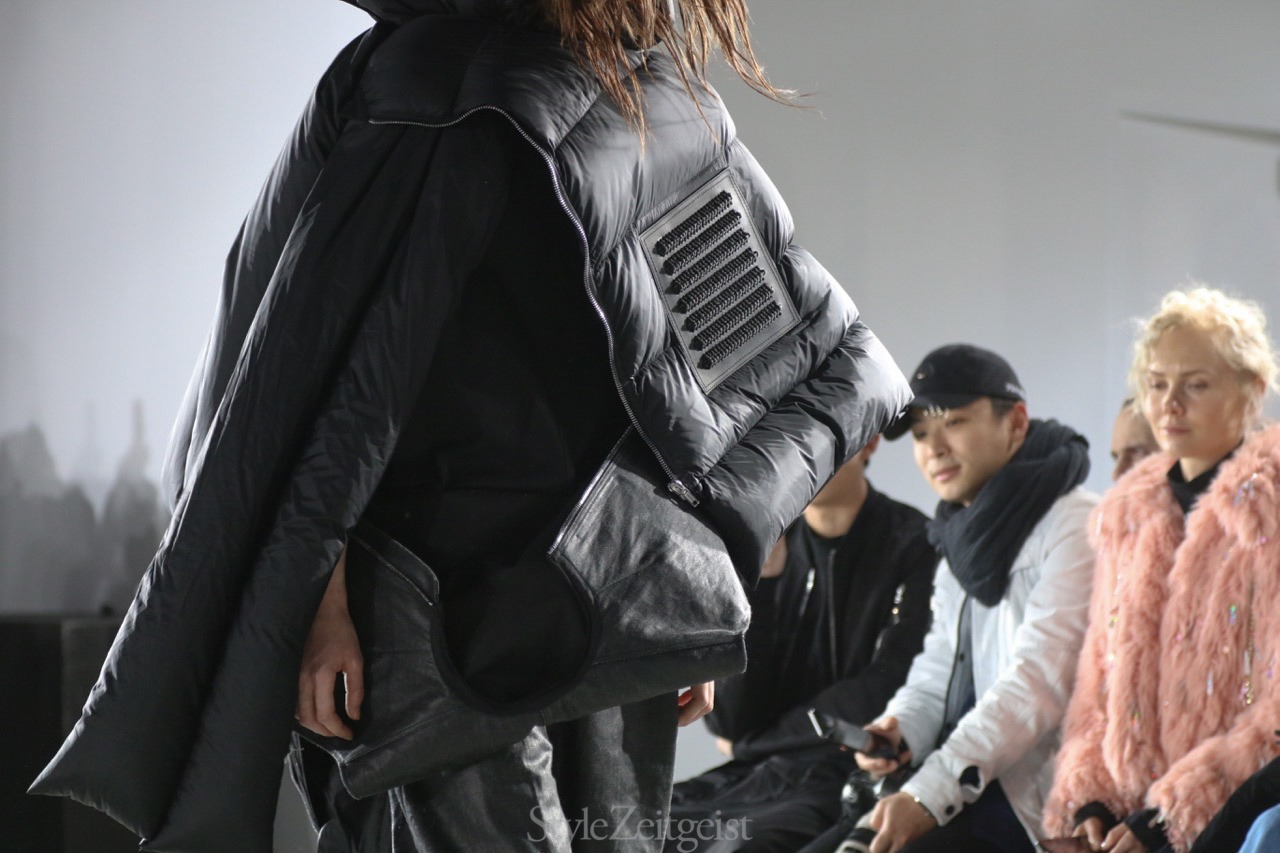 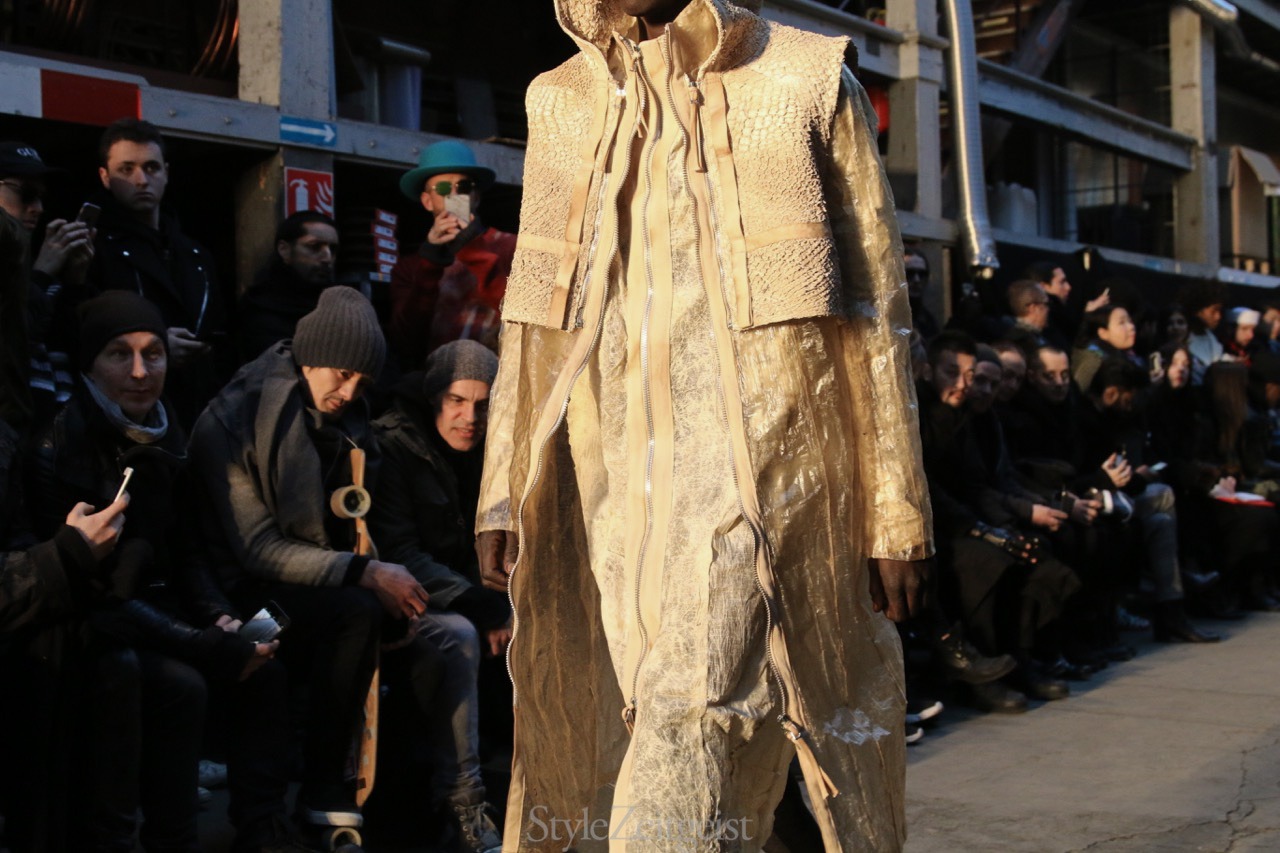 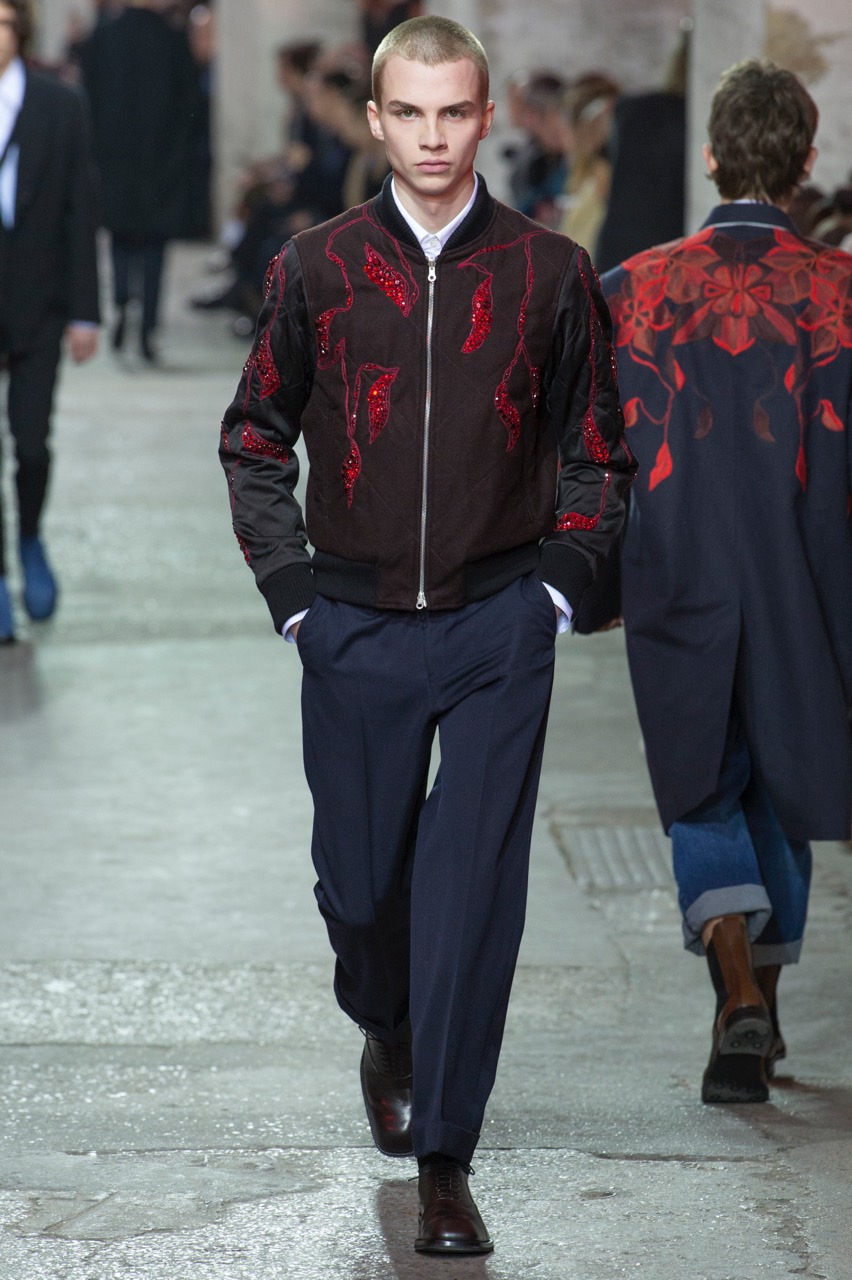 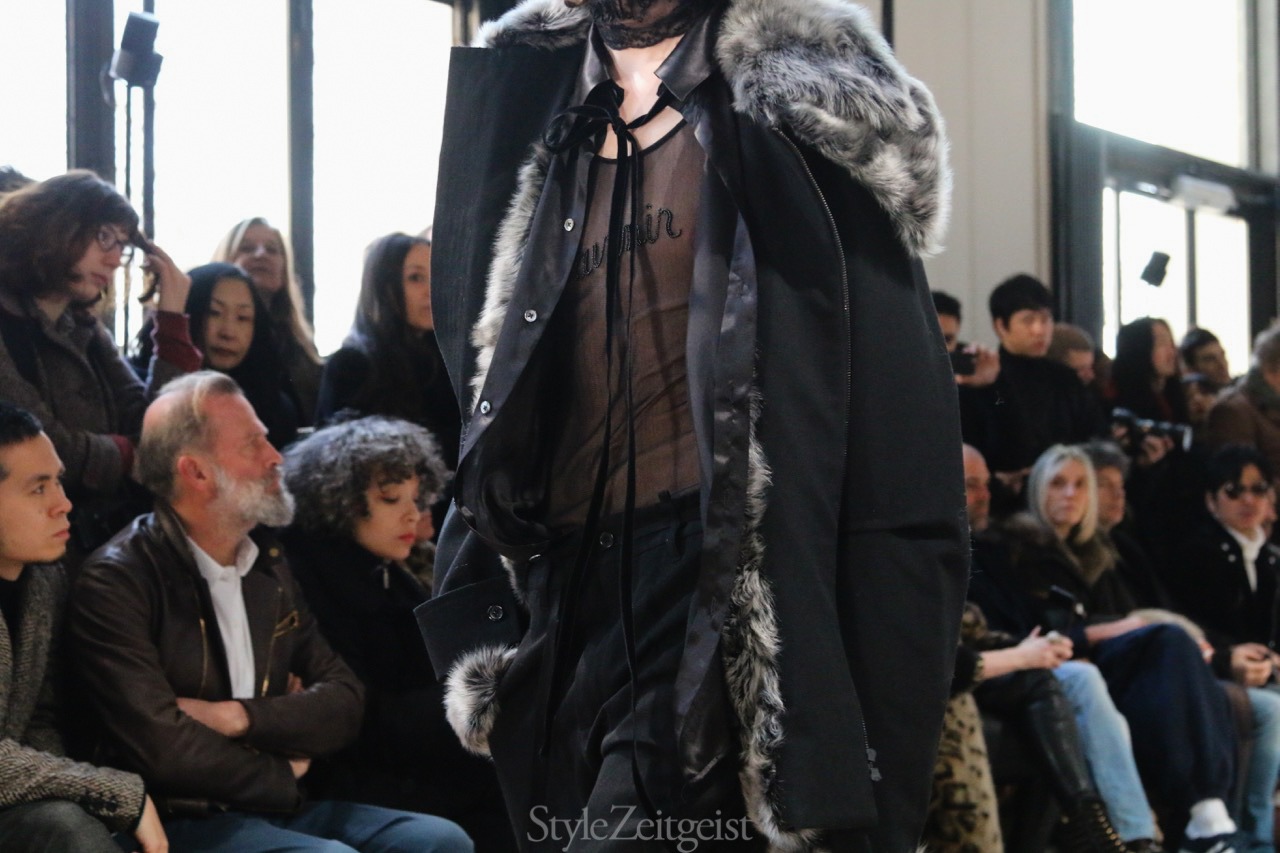 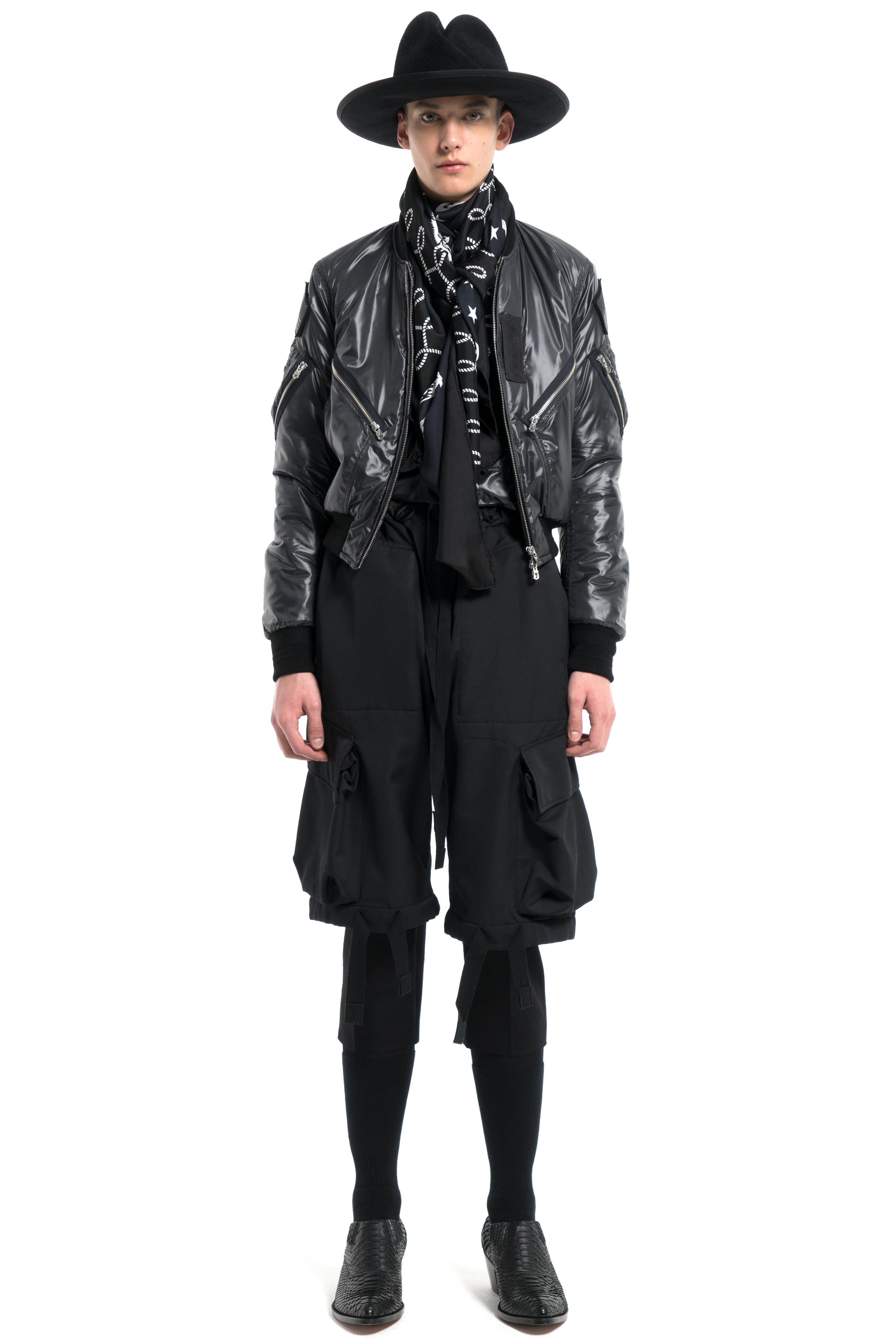 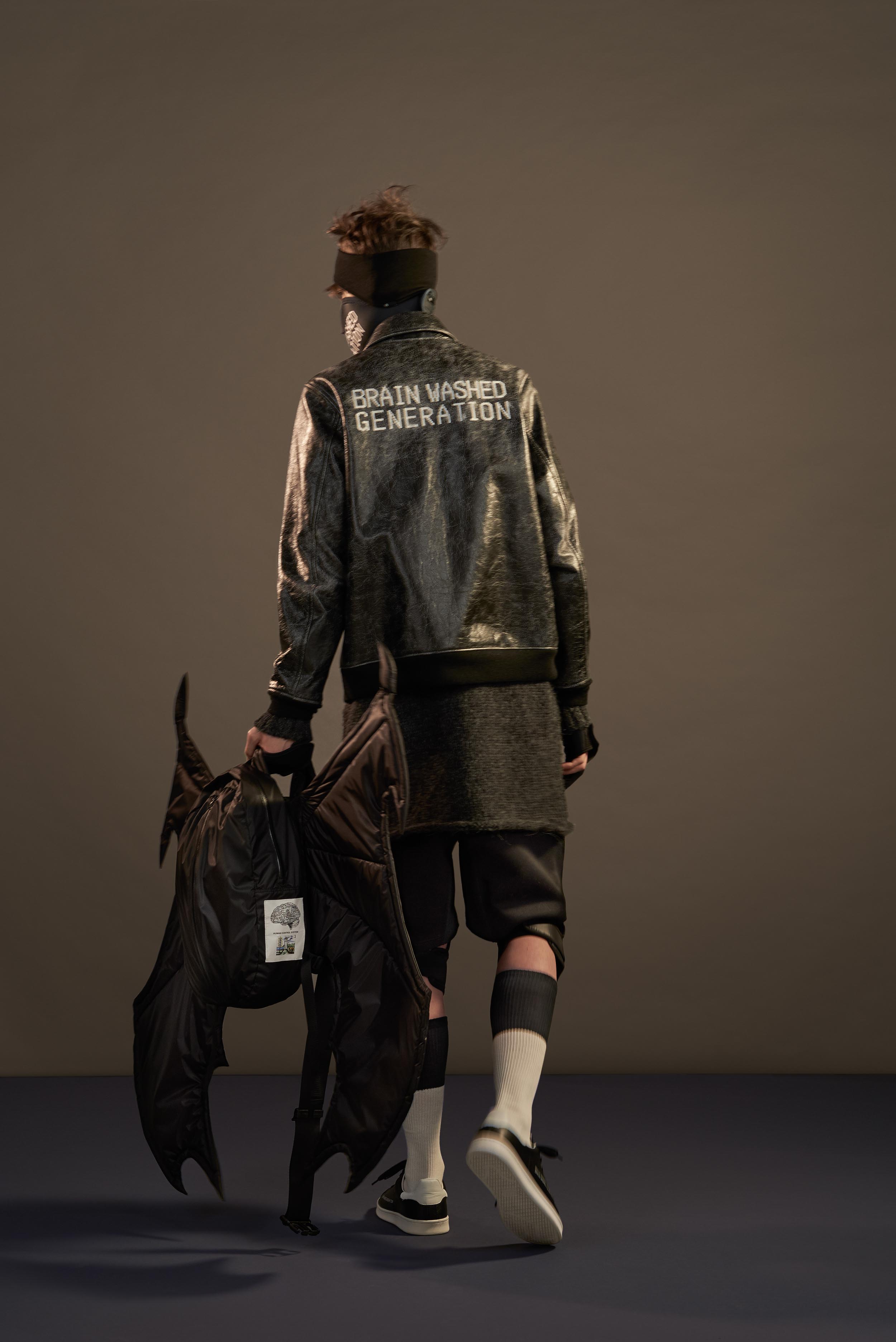 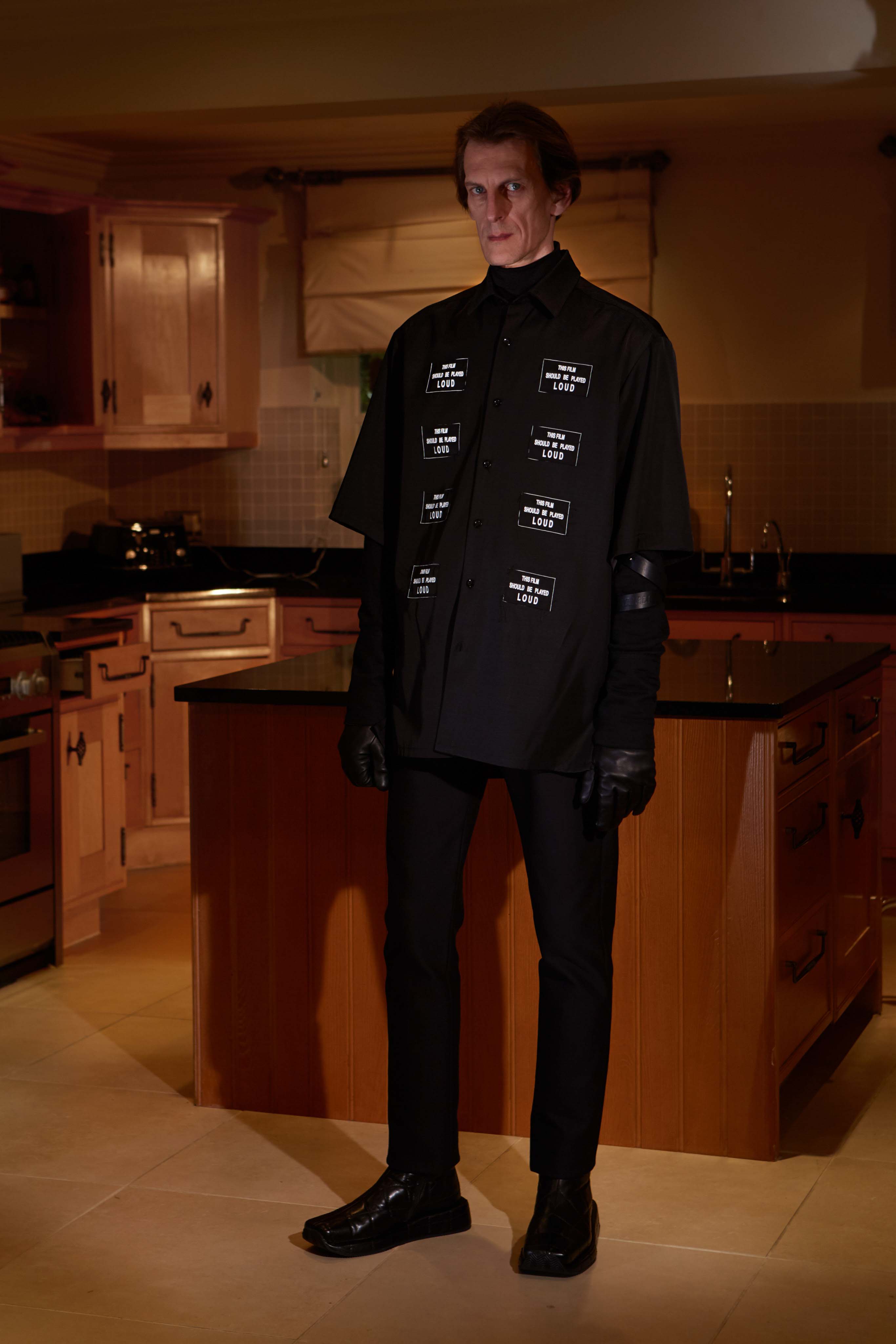 It seems somewhat silly to write about fashion these days, given the disgraceful political situation in the US, and I’ve probably had more conversations about the Orangutan in the Oval Office than about fashion proper over the week I spent in Paris. But, write I must, and so here are my impressions of a season that was mostly flat and that made me think that menswear is just spinning its wheels. There were a couple of marketing exercises so obviously aimed at creating hype that they felt more forced than clever. The smaller of these were Demna Gvasalia putting a simple white hoody with a Kering logo on the Balenciaga runway. Kering is the luxury conglomerate that owns Balenciaga, Gucci, an YSL, among others. In a clearly orchestrated PR move Gvasalia explained to Business of Fashion why he put the logo of his employers on the hoodie that had zero design merit otherwise. He blabbered on about logos no longer meaning anything, and how artsy it all is. But a logo is a symbol and symbols have meaning, and Gvasalia’s PR contortions don’t make it otherwise. And a Kering logo is a symbol of a powerful corporation that pays Gvasalia to put its logo on a sweatshirt.

Then there was the Supreme x Louis Vuitton collaboration that Kim Jones unveiled for the LV men’s collection. Or is it Louis Vuitton x Supreme? Because these things matter, since I don’t know a single person who buys Louis Vuitton menswear, and I doubt that you do. This was clearly a feat of accomplishment for Louis Vuitton to bring some attention to Jones’s work, but I struggle to think how Supreme would benefit from this except financially. For anyone who is not a fuccboi or who possesses more than two brain cells, it should be obvious what Louis Vuitton the brand is – a housewife’s dream, a status symbol of the bourgeoisie. That Supreme as a brand has stood against this for more than twenty years seemed to be on no one’s mind. I mean, someone at Supreme must have sat at a round table and agreed that this was a good idea. By right this label should be losing half of its street cred right about now, but of course none of the sort will happen. With this collaboration Supreme told everyone that it thinks it can do no wrong, that they know that the consumer sheep will line up for anything with Supreme logo on it. Much has been said lately about how the fashion consumer today has become smart. But the fashion consumer continues to be as dumb as ever. He has become savvy about shopping, sure, but that is very different from being able to string together a few thoughts about what it is exactly he is buying.

As for the rest of shows I saw (or didn’t), sadly there is not that much to write home or to you about. I began with Haider Ackermann’s show last Wednesday night, which to me seemed simultaneously too little and too much. Too little because I saw little innovation in his cuts, and too much because each garment seemed to have that one extra design element that was unnecessary. Ackermann usually knows perfectly well when to stop, but this time he did not. He seemed to have left all his reserve for his debut at Berluti, which was fantastically elegant, and in my other life, one where I would live in some grand house in Milan doing nothing in particular, would turn me into a Berluti customer stat.

Next morning I began with Rick Owens, and whereas the last two seasons of him going bonkers with volume and maximalism left me indifferent, there was something about this show that felt right. You had to be there to be swept away by the elegiac music, the slowly moving models who carried all that oversized mess with unprecedented dignity. With this show Owens continued his wearability-be-damned march. In the showroom there were some wearable pieces that will make your wallet cower in fear, but it’s exactly the kind of thing for which you build a cult.

Then it was onto the Boris Bidjan Saberi show, which saw the designer confidently continue doing what he does, digging deeper and progressing without abandoning the core of his style. Saberi is one of those designers who works from the heart, and whose motto is “I can do no other.” I wish I could say the same about Tatsuro Horikawa’s Julius, which showed the night before. I knew I did the right thing by skipping the show when I saw the pictures. It was a directionless mess of Vetements and Hood by Air that you’d expect from a B-brand, but not from one who has built such clearly defined house codes before. It was the final nail in the Julius coffin as far as this reviewer is concerned, and frankly it makes me wonder about the Horikawa’s authenticity even in the label’s glory days.

There was more of the same at Yohji Yamamoto the same night. The invitation said Working 24 Hours Every Day, perhaps implying that Yamamoto is tired. And the collection certainly felt tired.

At the Dries Van Noten show that followed Yamamoto’s, the designer surprised his audience somewhat by largely doing away with embellishment and color play that he’s so good at it. Perhaps that’s why it felt a bit underwhelming. But there was also an endearing element in the show when Van Noten decided to take the logos of his fabric suppliers and put them on the outside of his garments. It was a celebration of artisans, of makers, of people whom we fashion consumers hear nothing about, but who are paramount to fashion. If we should be celebrating anything, it should be them and not fashion’s corporate overlords.

The next morning there was the Junya Watanabe show that left me utterly perplexed. Most of the garments were jackets done in collaboration with North Face. On these, the logos took up half the torso and my entire mind, leaving nothing else to process. Well, except the sweatpants that were Balmain knock offs. Watanabe is not exactly known for humor and irony, but maybe that’s what this was? I have no other explanation. I hope he makes them really expensive, if he’s indeed making a gesture. Since plenty of idiots buy $900 sweatpants from Balmain, I say double the price and take their money.

The Ann Demeulemeester show that took place at noon that day was ethereal and one could sense that Sebastian Meunier is finding the balance between maintaining house codes and subtly pushing his version of romanticism. Or not so subtly, as men clad in fur and semi-sheer flowing shirts walked down the runway.

My last show of that day was Comme des Garcons, where Rei Kawakubo stuck a bunch of toys on the back of her suits. The whole thing was silly, or perhaps a clever commentary on how adults are the new children – in this case it would be an astute observation, indeed.

On Saturday morning I debated whether to go to the Sacai show, which was held god knows where. Holding shows god knows where seemed to be the theme of the season. Given the terrible cold spell that gripped Paris, plenty of attendees grumbled about having to schlep to far-flung Paris locations and risk being mugged in the process. I went anyway, and I am glad I did. It seems that few designers today feel as confident about being firmly in the saddle as Chitose Abe does. She has found her aesthetic and it allows for seemingly infinite permutations. In this case it was camouflage shaved into fur contrasted with pleated navy wool, herringbone and olive gabardine, and FOR ONCE a handful of collaboration pieces (again with North Face) that looked absolutely great.

Sunday morning Lucas Ossendrijver produced a confident show at Lanvin. It’s evident that since Elbaz’s departure, Ossendrijver is taking the Lanvin man in a sportier direction, this time as far as bonafide ski parkas. It’s fine by me, because Lanvin’s secret remains the stellar execution of its garments, with quality of construction and materials next to none. The show also made me realize that all my life I have wanted a scarf that says “NOTHING” on it.

Now, onto the designers who don’t put on shows. Of these TheSoloist by Takahira Miyashita gets first mention. He presented a very strong collection, where one of the central ideas was making linings into garments. These were turned into unlined (for obvious reason) jackets without lapels an with tassel closures, and a very desirable wool ripstop coat lined with fur. The pockets were accessible both from the outside and the inside, and all seams were finished with leather piping. The quality of materials, construction, and finish of these garments was so impeccable that I spent more time than I had examining everything. It will be expensive, but you will know what you are paying for.

I wish I could express the same level of excitement about Undercover, whose lookbook looked interesting mostly due to clever layering, but whose end product was, with a few exceptions, largely uninspiring this time around. Still, Takahashi is a true auteur, and so he gets to own his failures along with his successes, and I respect that. The name of the collection was BRAIN WASHED GENERATION, and that certainly seems apropos vis a vis today’s fashion consumer.

Then I was off to Yang Li, who presented his best menswear collection yet. The showroom was full of great pieces, from oversized hoodies (that looked nothing like Vetements) to tailored coats with patches that should hit just the right note for any adult who never gave up his youthful idealism. I also liked his side project SAMIZDAT, which is merchandise for a band that does not exist, and because the band does not exist Li can change its genre from season to season. If you cannot tell yet from the clothes, you should know that Li is a huge music fan, and now he has the means to create the merch.

There was also plenty to want at the showrooms of Forme d’Expression, Label Under Construction, and m.a.+. And though one may complain about the lack of progress from these designers, their close attention to garment construction and their impressive fabric sourcing skills always leave me wanting. Besides, this season each of these did introduce new garment styles and their fans will certainly have something to add to their wardrobe.