Five years ago, a colleague of mine told me about a young Belgian designer in New York who worked at RLX, the Ralph Lauren’s technical sportswear collection, and who was showing his first collection under his name at his apartment. I made an appointment, which got derailed by a blizzard. The designer’s name was Tim Coppens, and though we didn’t meet then, I have closely followed evolution of his work. It took a trip to Florence for Pitti Uomo, the premier mens trade fair, where Coppens would be presenting his latest collection as its special guest. Coppens is consistently underrated, and the American fashion press has done shamefully little to change that. Perhaps the Pitti Uomo show would be where Coppens would get his due.

Coppens’s work is somewhat autobiographical and is inevitably connected to his cultural experiences. A good designer is able to process culture through his unique prism and in turn create something meaningful. Coppens was and still is an avid skateboarder and reinterpreting skateboarding culture into a sartorial vision where sportswear is combined with tailoring and synthetic materials with natural ones is his way of creating a style of his own. Streetwear has long been accepted as fashion, and plenty of designers have done lazy streetwear – slapping logos on sweatshirts – but few of them have been able to elevate it the way Coppens has done. He is good at combining materials and of taking garments out of their normal context (say, making parkas using virgin wool rather than polyester).

I met Coppens in a hotel on the outskirts of Florence the day before his show. His skeleton crew has taken over the hotel’s meeting room and was frantic with preparations. Coppens bounced around the room, while out of a lone speaker boomed the show’s soundtrack, which included a remix of a Nine Inch Nails track. There is a relaxed, drama-free air about Coppens, which seems to extend to those who work alongside him. What you see is what you get.

Coppens was born in a small town in Belgium near its Dutch border, halfway between Antwerp and Ghent. He made his own clothes since he was a teenager in the late 80s and early 90s. He made utilitarian clothes for skating. He created his own prints, and when he started going to concerts he made his own band t-shirts.

Everything Coppens did centered around skating. Back then Coppens was not exposed to a deluge of images the way we are now, which was a blessing in disguise. “I needed clothes that were part of what I listened to because they were not available. You kind of had to make it up because we had video only later, so the only way of seeing skateboarding was thinking what it was like. And a little picture here and there, but that was about it,” he said. “I wore a gray flannel suit with a pair of eS (niche skateboarding brand), and I would skateboard in that. I remember buying the first Sex Pistol record in a shop in Dusseldorf, and it was a huge influence on me. That’s when I also encountered the art of Joseph Beuys.” 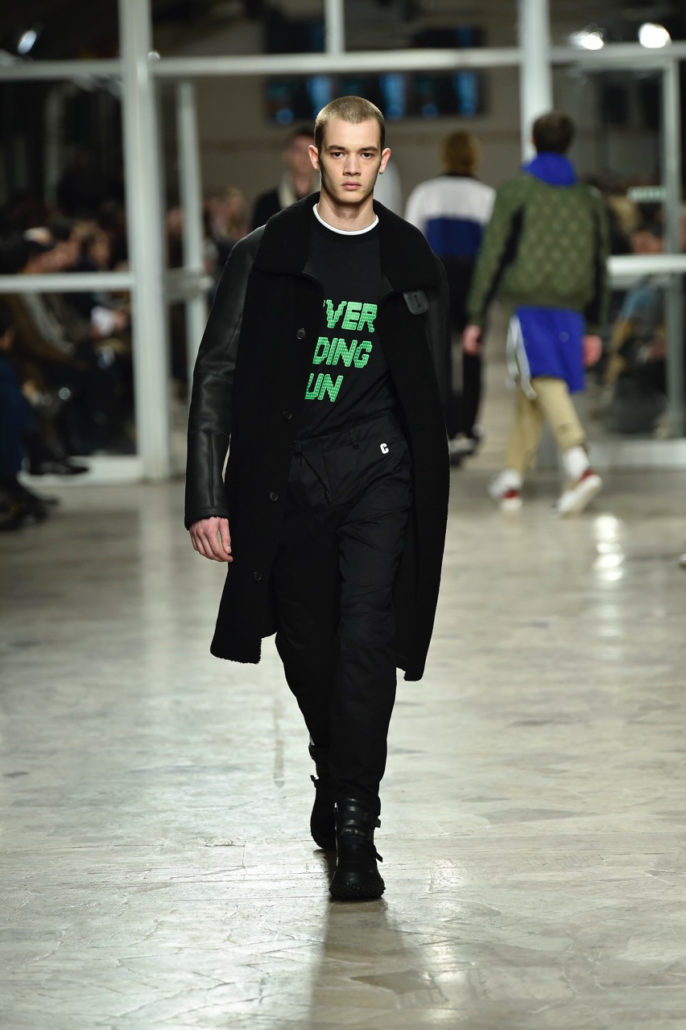 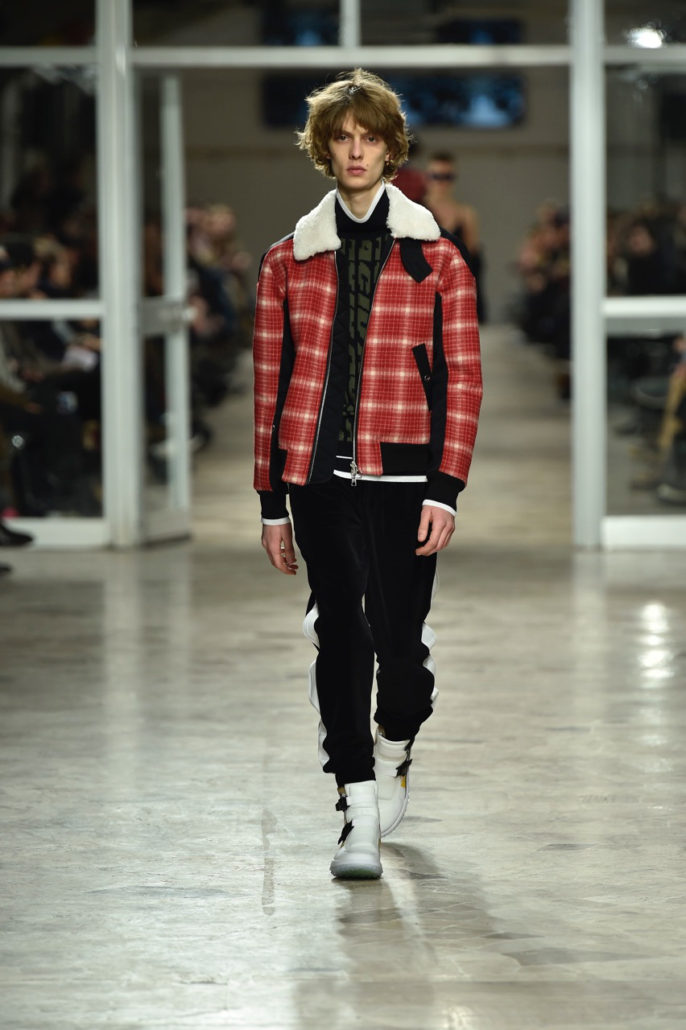 After Coppens graduated from the local high school he was advised to enroll in an architecture program in a university in Ghent. But Coppens quickly realized that he’d be studying math and physics for a long time before doing anything creative. He dropped out after a few weeks and moved to Antwerp. There for a year Coppens worked on graphics and skated with Raf Simons’s models in his free time. “They were not necessarily in fashion, but were hanging around and going to parties and were connected through people that were in fashion,” said Coppens.

After a year of drifting he enrolled into Antwerp’s Royal Academy of Art fashion program. It was a good class that produced Haider Ackermann and Kris Van Assche, among others. The freewheeling teaching style of the program suited Coppens just fine and he coasted through the first years, until Linda Loppa (the school’s director) called him into her office and told him that if it wasn’t for Walter Van Beirendonck, he would’ve gotten kicked out and that he’d better shape up. “So, I was like, I need to make a collection,” said Coppens laughing. “And I did, and I am very grateful that Linda and Walter gave me a chance. In the 4th year you are a lot more freer to do your own thing, and that certainly worked for me. My collection was my world, with the music, the graphics, and everything else. I graduated with something that was very individual, very much my own.”

Coppens was one of the seven students that graduated that year, out of the class of seventy that were initially accepted. But as soon as Coppens finished school, his stubborn, freedom-loving nature won out. He refused to go the regular route of moving to Paris and assisting at a fashion house. He packed up his skateboard and some clothes and moved to Barcelona instead. “Knowing what I know now, maybe I would’ve gone a different route. But there was no one around to point me in the right direction,” said Coppens.

In Barcelona Coppens did a few consulting gigs before moving to Munich to design for the German ski company Bogner. He worked there for a year before moving back to Antwerp to do various projects with his friends. At some point Coppens took a job at Adidas. While working there Coppens visited New York and he fell in love with the city. He moved to New York as soon as he could an got a job designing for RLX. “It was a good experience, but after a while it was hard to deal with the corporate structure and I decided to try my own thing.” Unlike me, the menswear buyer from Barneys did not miss his appointment with Coppens. Barney’s was the first store to buy his collection, allowing Coppens to strike out on his own.

Coppens spent the first few years hammering down his aesthetic and trying to figure out what it is exactly that he wanted to say with his work. “In the beginning I was like yeah, we can make good clothes, and I’m sure you know what it is about, but actually nobody knows what it’s about if you can’t communicate it,” he said. “But at the end of the day, I love making product, just designing. It’s the same journey I started on when I was growing up, making a pair of pants that I needed to go skating.” For Coppens the utilitarian aspect of clothing is still key, which is why he equally loves the original designs of Helmut Lang and the products at army surplus stores. 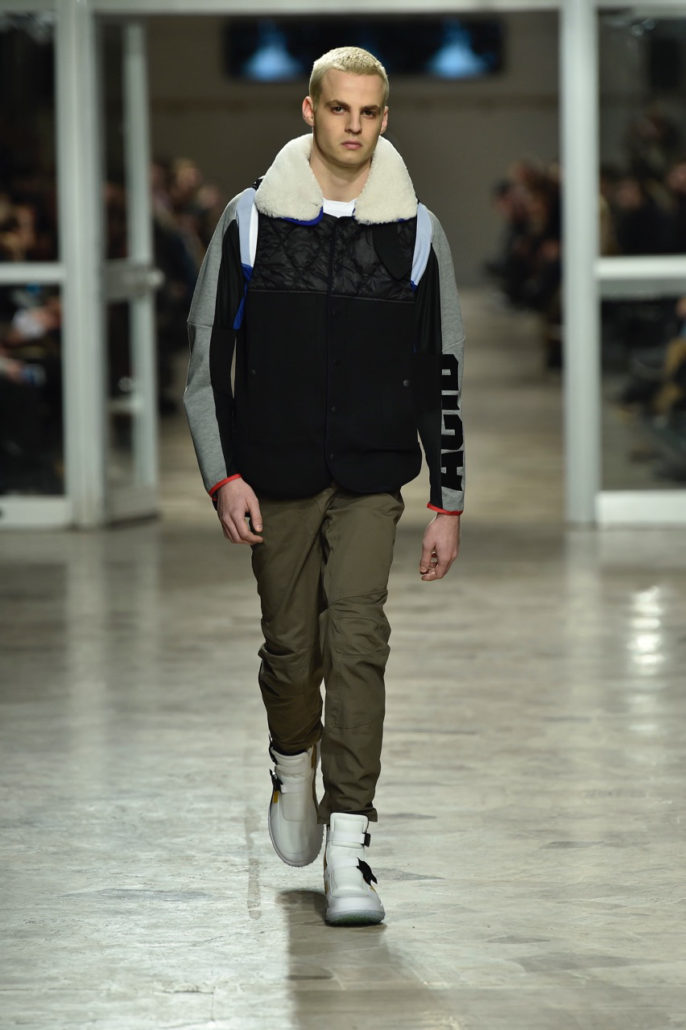 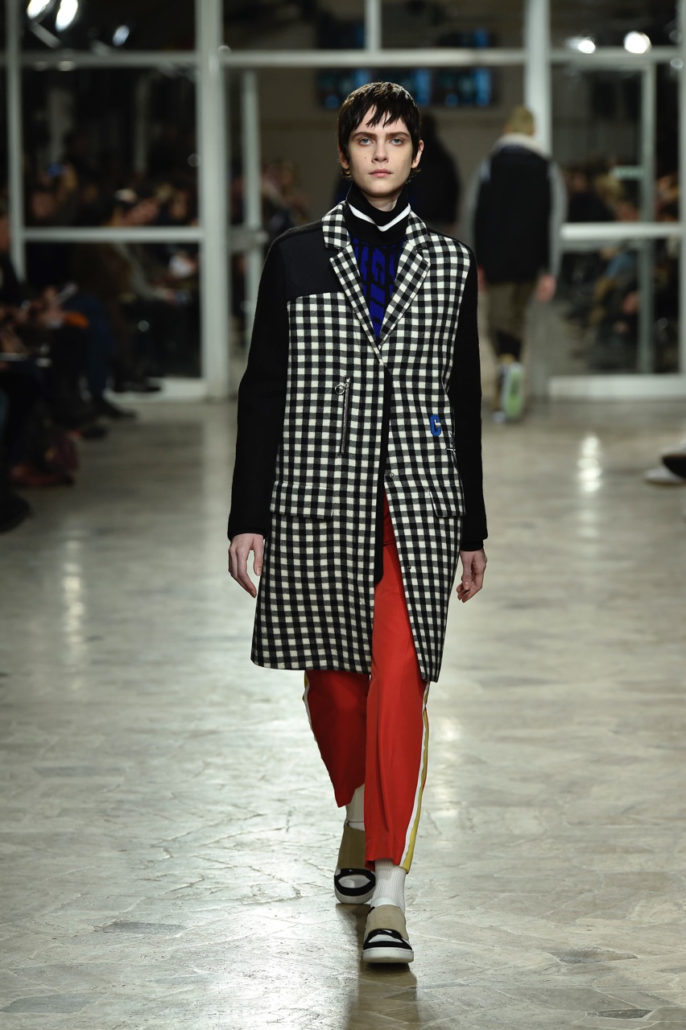 Another of Coppens’s central design ideas is elevating the utilitarian aspect of clothes. There is a lot of painstaking detail in his work, which reflect Coppens’s knowledge of tailoring. “A lot of detail in my clothes people don’t even notice. But they give depth to the garments, and that’s the important part,” said he. “The piped seams and the carefully chosen virgin wools that are blended with linens are there because we have to achieve all that. That’s the sartorial knowledge that I have built up and it’s important to show because that’s that artisanal beauty of the product.”

The collection Coppens would present at Pitti Uomo the next day is based on a story of Max and Tequila, a man and a woman who fall in love and flee the post-apocalyptic New York for Belgium. It is part fantasy and part autobiography in reverse. It also reflects Coppens’s increasingly dark, politicized mood of an expat living in America that will officially be under Trump’s rule in just a few days. “I don’t want to overestimate the importance of clothes that people wear,” said Coppens. “At the same time I put a lot of what I have experienced over the past 20/30 years into my clothes. It’s not just what I see right now, or some art book that I have that is important, it’s the baggage of my life that I carry. That accumulation right now is my reality, but I also look back to my early 20s, hitchhiking from Antwerp to Barcelona, hanging around, and not giving a fuck. And that’s the spirit of the collection.”

Because Coppens draws so heavily on his life experience, authenticity is important and comes easily to him. Everything eventually goes back to skating. Fashion’s pretensions that decouple meaning from aesthetics and turn everything into mere gestures don’t sit well with him. “What does it mean when you see a cover of a magazine with a model holding a skateboard?” Coppens mused. “Though it’s not much different when I was growing up. There were also kids walking around with skateboards under their arms. The community of people that skate is a real community. There are amazing kids out there who have the passionate spirit of being a skater. Going out there, time after time, freezing cold, super hot, practicing that one trick again and again. And I know people who are older than me who were in that world and now have jobs, and they have the same spirit in what they do in life also.”

After six years of working on his own largely under the fashion’s radar, it has taken a sportswear company to provide Coppens with additional recognition and reward. Last year he was approached by Under Armour, the American athletic apparel manufacturer that markets itself as the one for true athletes. The company offered Coppens the position of its creative director. This suited his obsessiveness with construction and detail just fine, and he took the job. Because of its financial rewards, Coppens can breathe a bit more freely and worry less about making it from one collection to another. One can only hope that after the show at Pitti Uomo, which draws a significant number of international buyers and press, Coppens will reap additional rewards.