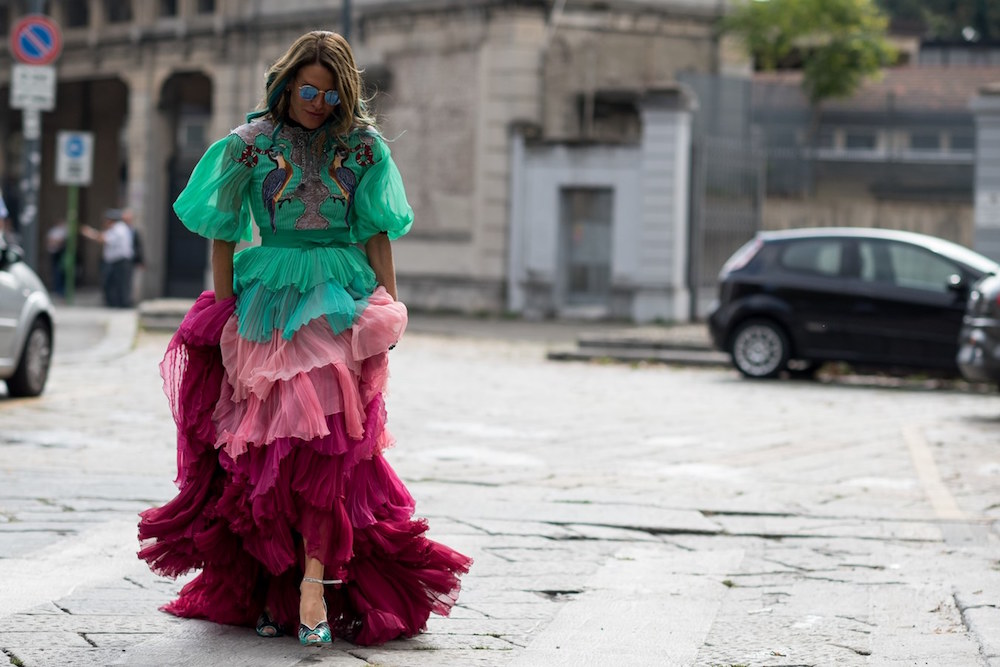 One of the most persistent questions I have gotten over the past two years is what I think about Alessandro Michele’s Gucci. I’ve been asked this so many times that I decided to put something in writing, if only to put my thoughts in order on this subject and answer the question properly.

Simply put, I find Gucci infantile. Of course its infantilism is the crux of its popularity, because much of the fashion audience today consists of adult-children who have zero interest in anything beyond its cloying surface. The glory days of, relatively speaking, serious fashion that lent itself to analysis has been left in the last decade when Helmut Lang and Margiela stopped designing, and Raf Simons began spreading himself thin. The new audience for fashion is a mass audience, and mass audience is not interested in the subtleties of a designer’s thought process. Just look at the poor Hussein Chalayan, who was the intellectual darling of fashion in the late 90s and early aughts, and whom that same scene has rendered irrelevant by now. Today, fashion is a big market, in which few people are genuinely interested in design, and no fashion business executive in his right mind, especially in a conglomerate like Kering, which Gucci is part of, would want them to be. It’s go mass, or go home. So, in a way, Gucci has captured the zeitgeist perfectly – they are shallow clothes for our shallow age. 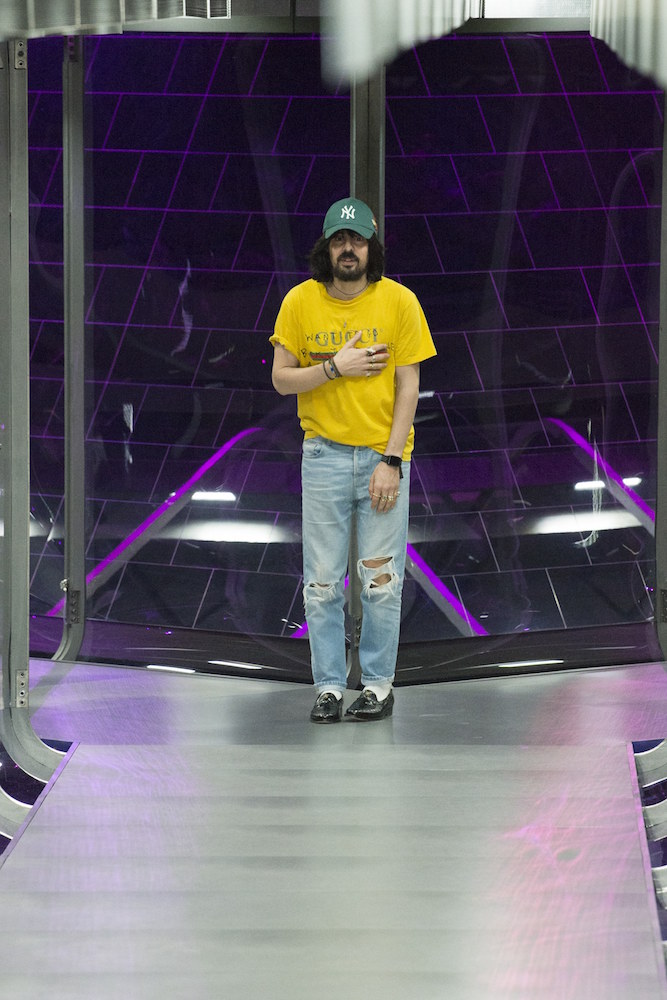 Michele wears his infantilism on his puffy sleeve (and front, back, and any other place where he can stick a glittery snake or a rose or any other number of banalities). His clothes are not beautiful – true beauty requires a certain degree of sweep – but cute, pretty. Its surface is sickly sweet, like coffee with too much sugar in it. It hides lack of design in the overload of ornamentation. It’s supposed to be “fun,” the way I assume Disney Land or Las Vegas must be fun for the hordes of people who go in for such things.

Besides the fashion victims, Gucci taps well into the prevailing mode of the fashion cognoscenti, who consume fashion with campy irony (the fact that it appeals to both the casual consumers and the insiders is some new level of meta-irony). Much of Michele’s output is calculatedly inelegant, which plays very well with the in-club, whose prevailing modus operandi is “it’s cool because we say so,” since they don’t need to back up their opinion in the postmodern world that has demolished all markers of merit when it comes to taste, thereby rendering any argument about taste meaningless. You can look no further than Michele himself, who came out to take the final bow at the end of last show in Seinfeld-jeans and a reissue of a retro Gucci tee (retro is integral to camp). When Obama wore such stylish denim he was roundly ridiculed for wearing “Mom jeans,” but no one would dare say that of Michele, the fashion insider par excellence, for fear of seeming to not “get it.”

What’s left when you cannot talk about the clothes in any meaningful way is shopping. And the amount of product Gucci puts out under Michele is staggering. The last Gucci show – granted it combined men’s and women’s – featured one hundred and twenty over-styled looks. The everything-and-the-kitchen-sink approach to styling is another trick in obfuscating Michele’s lack of ideas. The pressure to put out product must be enormous – according to Marco Bizzarri, the new Gucci CEO, Kering has invested “billions – not millions – of euros” into overhauling the company’s image, including redecorating its 500 stores. Bizzarri, a former executive at Accenture, a management consulting firm, also let it be known in his recent interview with the Financial Times that he ensures that product sales data flows from stores straight to his and Michele’s desk, which means that product dictates design, and not the other way around. The pricing on this stuff reflects no discernible rhyme or reason. Last week I checked the Gucci rack at Bergdorf Goodman – a disheveled looking cotton hoodie with a retro Gucci logo retailed for $1,290. The profit margin on a piece like that must be staggering.

Some say that Gucci is breathing fresh energy into fashion. And it may seem new, though it owes an obvious debt to Prada and Miu Miu (nothing wrong with being influenced, by the way.) But I am not convinced that newness is a value in itself. Newness is, of course, important for fashion business and its relentless pursuit of selling us stuff we don’t need. But in critical terms, newness has to come accompanied by something else, namely good design. Make it new only works so long as it merits examination and lets a train of thought depart from station A.

The contrary is true about Michele’s work, which is Warhollian in its flatness, all surface and no substance. One of Warhol’s dubious achievements was that his work was so lowest-common-denominator bland that its very emptiness allowed the so-called critics to fill it with whatever meaning they wanted, aiding and abetting the said critics to satisfy their own ego in producing obscurantist verbal diarrhea (despite Warhol telling them straight up that he is not interested in anything but surface – they never bothered to take him at his word).

Still, Gucci remains relevant, only if it serves as a mirror of the sad state of affairs in today’s fashion industry. It’s just not a mirror I want to look in. 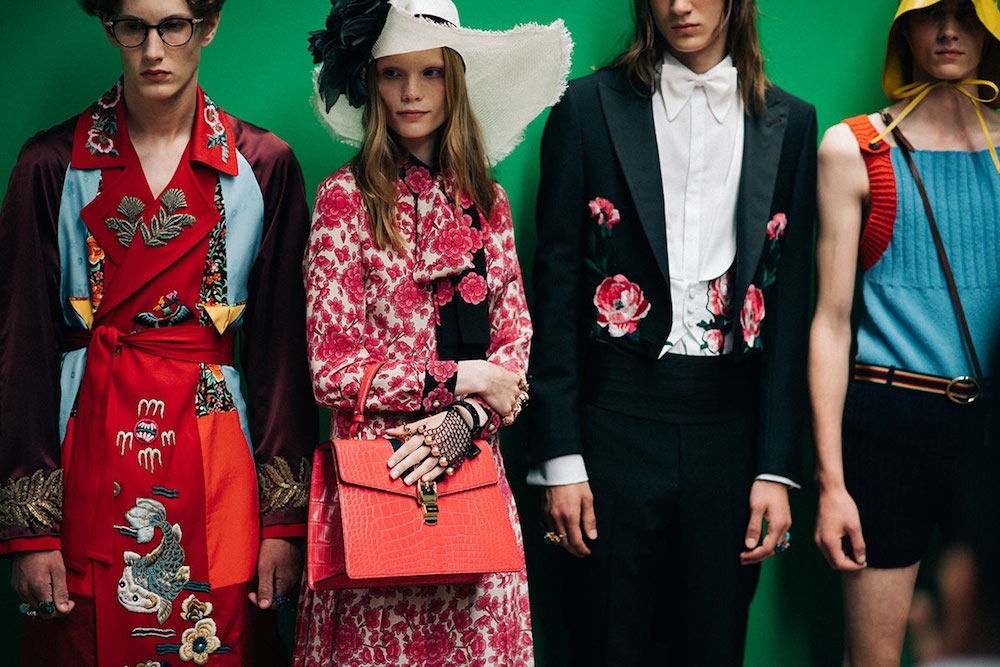