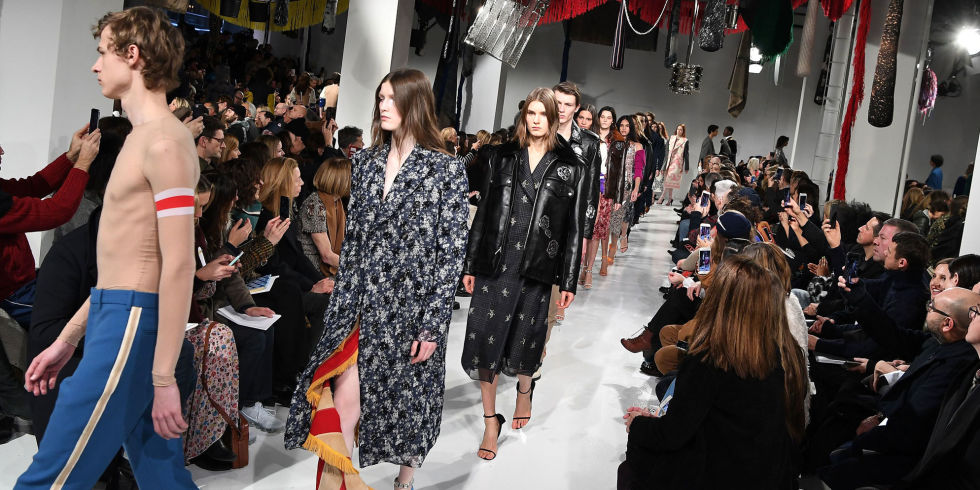 Two weeks ago the Business of Fashion published my Op-Ed lamenting the exodus of creative labels like Thom Browne and Proenza Schouler, who decided to move their shows from New York to Paris. I pointed out certain shortcomings of New York Fashion Week and New York fashion in general – its blandness, commerciality, bloated schedule, and so on. I also offered potential solutions – not all of them immediate, comprehensive, or easy, but solutions nonetheless. The point was to start a discussion about what could be done.

I also named some culprits, among them the Council of Fashion Designers of America (the CFDA). Last Thursday, the Business of Fashion published another Op-Ed, by Ed Filipowski, the co-chairman of a powerful fashion PR agency, KCD Worldwide, which represents the CFDA. In this incoherent and meandering article, titled “NYFW: Stop the Negativity,” Mr. Filipowski spoke ominously about some unnamed backseat drivers who dare to be critical of the fashion industry. He thought they were bitter. He wondered why “they” don’t do what the largely defanged fashion press always does, close ranks and keep their mouths shut. He referred to the recent scandal involving Lucinda Chambers, the former editor of British Vogue who criticized her former employer in an interview with the Paris-based fashion journal Vestoj after being fired by the incoming editor-in-chief. What this has to do with New York fashion week, I cannot fathom.

Finally, Mr. Filipowski got to me. He said he read my Op-Ed “with amusement.” I assure Mr. Filipowski and everyone else that amusement was not my goal. New York Fashion Week is moribund and in urgent need of fixing. It has become a lifeless and seemingly endless parade of boring sportswear and cocktail dresses, one in which seemingly anyone who is willing to pay can put on a fashion show. It is an open secret in the fashion industry that out of the major fashion weeks, NYFW is the most unexciting one.

What was the criticism that Mr. Filipowski aimed at my article, as well as the one by Bridget Fowley, the editor-in-chief of Women’s Wear Daily, who can surely hardly qualify as a backseat driver? That we were too negative. His solution essentially boiled down to this – “Be positive!” A vague, meaningless slogan only a PR person could offer. As an editor of a New York-based independent fashion magazine, I sorely wish I could be positive. This is my city and I want to be proud of the type of fashion, with the capital “F,” that it puts out, but I am not. Time and again, I have to hang my head in shame in front of my European counterparts in Paris, London, and even Milan.

The only concrete exception Mr. Filipowski took to my article was that I wrote that New York teaches its designers that commerce is the most important thing. Mr. Filipowski’s response was, “To say some scale of commercial success is not a goal for the majority of designers or brands is, well, just not American. It is who we are and we should be fiercely proud of it,” even though in my Op-Ed I explicitly pointed out that there is nothing wrong with commerciality per se, but that commercial success at the cost of creative one is a major problem for New York fashion. I never denied “some scale of commercial success” to anyone. I am too old for such idealism.

So, fundamental problems remain. Meanwhile, IMG, the NYFW’s producer is turning it into a consumer-friendly circus for high net worth individuals. “With a new service called ‘NYFW: The Experience,’ shows will now be open to loyal customers and high-end corporate clients, with a full package including VIP access to the shows, a serviced hospitality suite, and in person contact with the designers and models,” Dazed Digital reported earlier this month. So, NYFW is about to become a type of entertainment, a nightclub for the rich. What’s next, bottle service in front row?

Instead of being on the defensive, I would like Mr. Filipowski and the CFDA to understand that my criticism is meant to be constructive. To his credit Mr. Filipowsky was a gentleman and expressed admiration for the work we do at my magazine, though something tells me it was the first time he has heard of it. Such is the kind of treatment the independent fashion media gets in New York (another part of the problem, but I’ll leave it for another day). I truly wish one day I can return the favor of complimenting Mr. Filipowski and the CFDA on doing good work, once they make New York a true fashion capital.