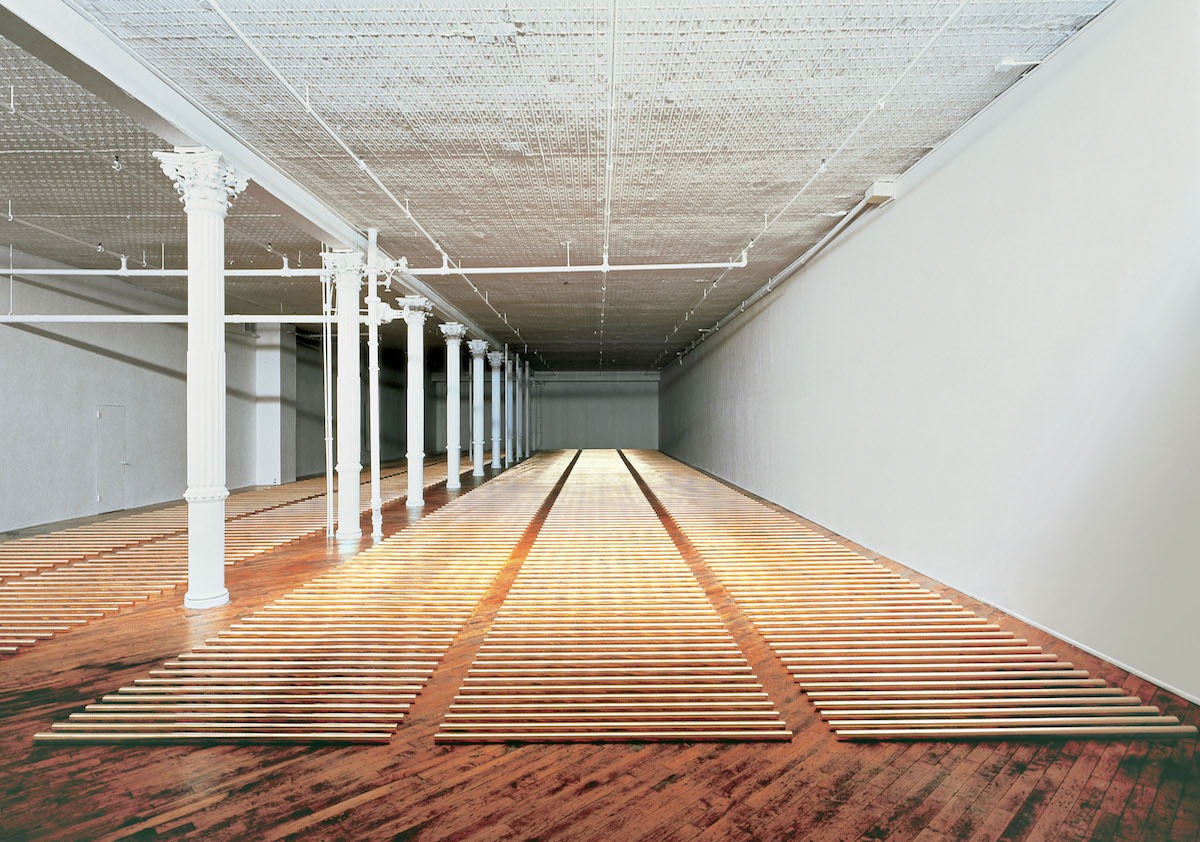 Up on the 2nd floor of a Wooster Street loft building The New York Earth Room by Walter De Maria bides its time, with hardly a building placard to announce its presence among the retail shops of Soho.

Though consummately of the art world and maintained in pretty much its current state since 1980 by the Dia Art Foundation, cursory internet searches on it mostly produce hits geared to NYC tourists or old reviews. De Maria died in 2013 and his passing, along with (primarily real estate articles) about the 1920 four-story, 16,400 square foot studio and home on East 6th street (a 1920s Con Edison substation) he left behind triggered a flash of renewed web traffic about him, this sculpture and his other permanent installation, The Broken Kilometer. That sculpture has taken up a street-level storefront on lower West Broadway since 1979 and it too is maintained by the Dia Art Foundation. Like the New York Earth Room, it barely announces its presence to those on the street. You’ve probably walked past it any number of times and you wouldn’t be blamed for doing so.

Of the two, The Broken Kilometer, is the more approachable in that it behaves the way we expect minimalist art to behave. The spare description provided by Dia skips on any attempts at the meaning of the work or even how it was made and instead provides a dry recitation of facts:

“The Broken Kilometer, 1979, located at 393 West Broadway in New York City, is composed of 500 highly polished, round, solid brass rods, each measuring two meters in length and five centimeters (two inches) in diameter. The 500 rods are placed in five parallel rows of 100 rods each. The sculpture weighs 18 3/4 tons and would measure 3,280 feet if all the elements were laid end-to-end. Each rod is placed such that the spaces between the rods increase by 5mm with each consecutive space, from front to back; the first two rods of each row are placed 80mm apart, the last two rods are placed 570 mm apart. Metal halide stadium lights illuminate the work which is 45 feet wide and 125 feet long.

This work is the companion piece to De Maria’s 1977 Vertical Earth Kilometer at Kassel, Germany. In that permanently installed earth sculpture, a brass rod of the same diameter, total weight and total length has been inserted 1,000 meters into the ground.

The Broken Kilometer has been on long-term view to the public since 1979. This work was commissioned and is maintained by Dia Art Foundation.”

The only things missing from the description is that you are not permitted to walk around among the brass rods and there is not much by way of natural light. You take the work in from the front of the room, as lit from above. From that prescribed vantage and under those unchanging lighting conditions, the work is somehow monolithic despite the rods being only 2 inches high and there being 500 of them. Even with the description provided in hand, it is challenging to mentally grasp the work and it remains stubborn, in no way budging from the realm of physical experience. Apparently, the rods are placed further and further apart to manipulate perspective so the lines stay parallel front to back rather than converging at some point into a vanishing point.

The New York Earth Room is less well behaved as a sculpture simply because it is unique. There aren’t, for me at least, other art analogues to use as a mental crutch in thinking about this sculpture. Again, a just-the-facts description from Dia:

The New York Earth Room, 1977, is the third Earth Room sculpture executed by the artist, the first being in Munich, Germany in 1968. The second was installed at the Hessisches Landesmuseum in Darmstadt, Germany in 1974. The first two works no longer exist.

The New York Earth Room has been on long-term view to the public since 1980. This work was commissioned and is maintained by Dia Art Foundation.”

So, what you’ve got here is literally a Soho loft full of dirt that over the years has become sterile (there is a charming interview from years back with the sculpture’s caretaker here in which he relates harvesting the mushrooms that used to pop up). A three foot tall glass partition boxes off the viewing area and also allows you to see how deep the dirt is.   The dirt runs pretty much wall-to-wall, so your vantage point is fixed, there is no walking around the sculpture. You stand in place to take it in and crane your neck left and right to try to see it all. Like The Broken Kilometer, this choreography forces you to experience rather than grasp. The physicality of it overwhelms any possession of the facts.

It is hard to pinpoint the allure of both of these sculptures, but especially The New York Earth Room. Do they haunt because they stay unchanging in a city predicated on relentless change? Do they astonish because they hunker down on really valuable real estate while remaining economically useless? Maybe they attract because they harken back (like ruins) to a time of foment and artistic visionaries (think Heiner Friedrich, who helped establish Dia) that seems inconceivable, even mythical, compared to New York today? Is it that they are doggedly heroic in an age that seems to champion noise and shameless self-promotion?

Like other American classics — Moby Dick, The Adventures of Huckleberry Finn, Taxi Driver, you name yours — these two artworks deserve to be and reward being visited and revisited. As we perpetually chase the new this Fall, these two 40-year old sculptures may be the freshest things you encounter all year. And, lucky for us, we don’t have to move at lightning speed to catch them. 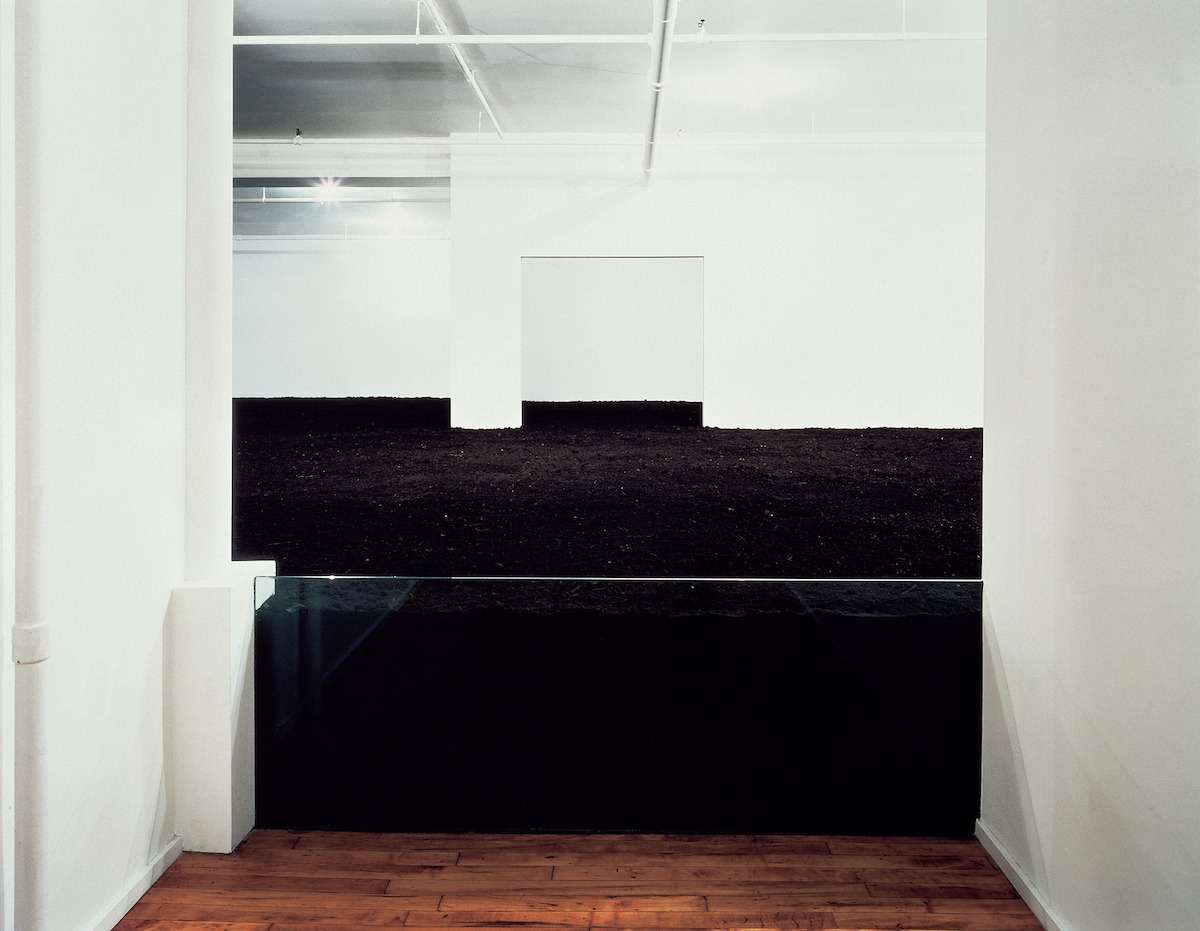