YOUR OLD BAND TEE IS A LAME TREND 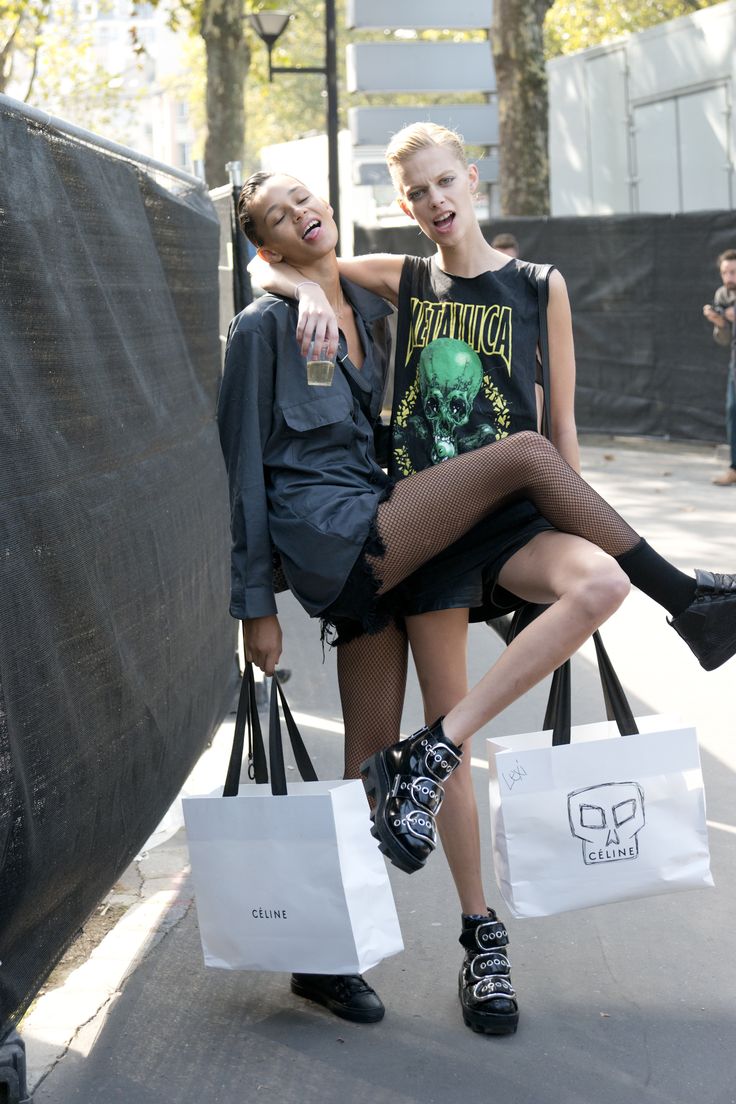 This past June in Paris I was sitting in the lobby bar of the InterContinental hotel after the Haider Ackermann menswear show, catching up with an owner of a prominent boutique. She was in dour spirits. “How am I supposed to sell fashion when even people who go to shows don’t wear fashion?” she asked ruefully and rhetorically. She was referring to the way the continuing casualization of style has been taking a toll on designer fashion at large. She was right. Today, one can see fashion insiders sporting Adidas track pants or a Nike jacket worn by a so-called “fashion person,” as likely as say a Rick Owens leather or a Celine bag. Last season, Instagram feeds of street style photographers were flooded with images of fashion people in Thrasher magazine t-shirts. This time the trend seemed to pivot in another direction, as time after time I spotted attendees in various band t-shirts – Hole, Pink Floyd, Nirvana, and so on.

Rock music, and especially heavy metal, from Iron Maiden and Slayer to Metallica and Guns’n’Roses, has given birth to a rich array of graphics. It used to be that you would only get street cred for your band tee if you bought it at a concert you actually attended. Which meant that you were a casual fan of the band at worst, and a hardcore one at best. Seeing your favorite band tee on someone else forged a sense of community and belonging, and fed into the rich tradition of youth subcultures. They were the not-so-secret handshake; they let you fly your colors and signal to others that perhaps like them you held certain cultural values dear. As you wore the tee and washed it, it aged, frayed, and became part of you.

This is no longer the case. Today, anyone can buy a band tee anywhere. A cursory look at the website of Urban Outfitters, the storied caterers to your average mall urchin, reveals tees from Kiss and Soundgarden, Misfits and David Bowie. Some of them are prewashed and pre-distressed, rendering the time and effort that gave that old tee a patina of authenticity obsolete. The website for Hot Topic, another teenager instant-personality emporium, yields 864 search results under its music t-shirt category. One of tees on the first page is that of Joy Division: Unknown Pleasures, surely the world champion of egregiously overused design. Oh, and you can also buy band merch at H&M.

In downtown Manhattan it seems that one cannot throw a brick without it hitting some model wannabe in a cut-off Slayer or Motorhead t-shirt. This past August at the Osheaga festival in Montreal I observed a member of the Weeknd’s entourage, who was sporting a Marilyn Manson tee with red track pants and a pair of Nike basketball shoes.

It’s not exactly news that band merch has been overused by all kinds of empty people, starting from the reigning champions of cultural vacuum, those who shall not be named but start with “K.” As early as 2015 fashion glossies ran articles with titles like “Band T-shirts: The Ultimate Hack For Cool Girl Dressing.” What’s strange is that fashion people, who usually don’t wear the kind of stuff they fling in their insipid style advise columns, have gotten on the bandwagon as well. It looks like some of them are trying to differentiate themselves by hunting for vintage concert tees, as opposed to going to Hot Topic, but at this point it hardly matters. None of the several people I casually tried to engage on the provenance of their t-shirts were actually familiar with the band’s music, let alone been to their concert.

Fashion people have their own reasons for wearing band tees to runway shows – street style photography and Instagram. As the pre- and post-show pageantry keeps getting out of control, the fashion people are increasingly driven by image anxiety to wear something that could potentially make them stand out. A band tee fits the bill. Not everyone is impressed. “I saw a lot of band tees this past men’s season,” Nabile Quenum, the photographer behind the popular street style journal J’ai Perdu Ma Vest who regularly shoots fashion show attendees, told me. “But I refused to take any pictures of people wearing them. To me it felt like cultural appropriation.”

The companies that handle band merchandise seem to be cognizant of new ways to monetize cultural capital they sit on. Since the likes of Vetements and Supreme have showed us that scarcity is the surest sign to success, they are looking for ways to elevate merch. For example, Bravado, the merch division of the Universal Music Group, has released limited edition merchandise for the Weeknd through eight carefully selected high-end designer boutiques in the United States, instead of wholesaling it to large retailers.

What’s driving all of this momentum is the continuing ascendance of the image, aided and abetted by social media. Of course this is no news; images have been driving culture since the days of photography and television. The problem is this – it used to be that the image had meaning. There was substance, a certain cultural weight that images were the emblems of. This is, increasingly and alarmingly, no longer the case. In the world of rock and roll image went together with the music. In a recent interview Takahiro Miyashita of TheSoloist pointed out to me that if you listen to early Nirvana, it sounds a lot like heavy metal, the genre that predated alternative music, and the one it opposed to, but also has borrowed from. So did the Smashing Pumpkins – listen to some of their early songs and you cannot tell much of a difference. Their image, and that included band merchandise, is what set them apart in their message of revolting against and ultimately discrediting hair rock.

The fans who purchased the merchandise surely agreed. When I bought Rage Against the Machine tees at their concerts, which the band pointedly sold for ten dollars, half the price the other bands offered theirs at, I was signaling my dissatisfaction with American capitalism, which the band captured in their work. I could not walk around New York with a RATM CD in my hands, but the t-shirt did the job. Meaning was everything.

Today, the band tee is simply becoming just another aesthetic statement decoupled from its meaning, another contribution to the continuing impoverishment of contemporary culture. And fashion people are at the forefront of its erasure.

(This article was originally published in Them magazine in Japan)