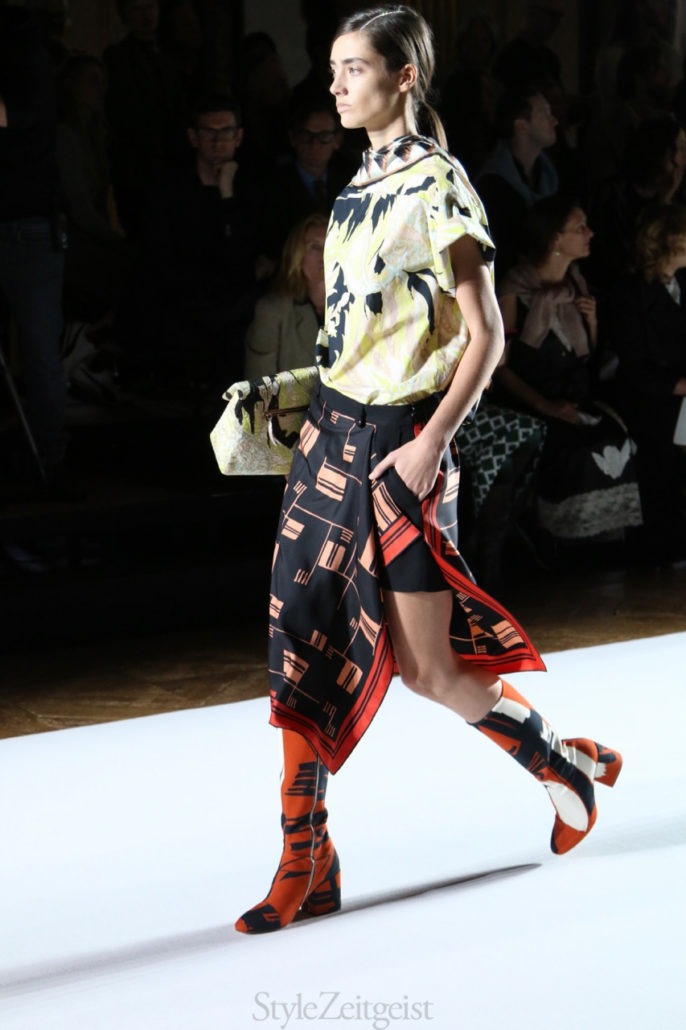 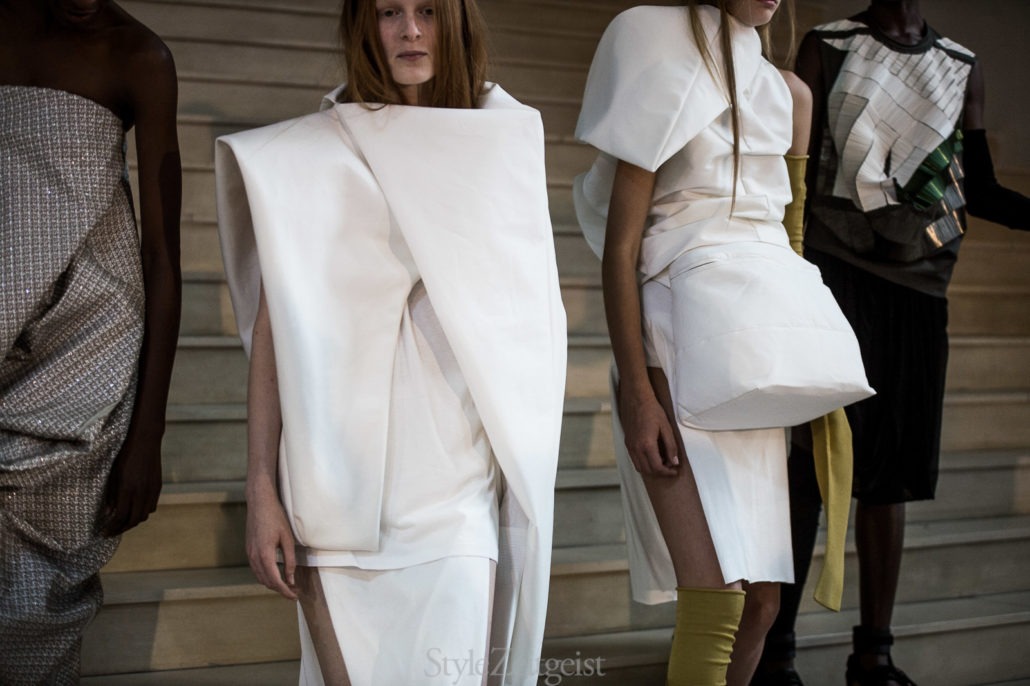 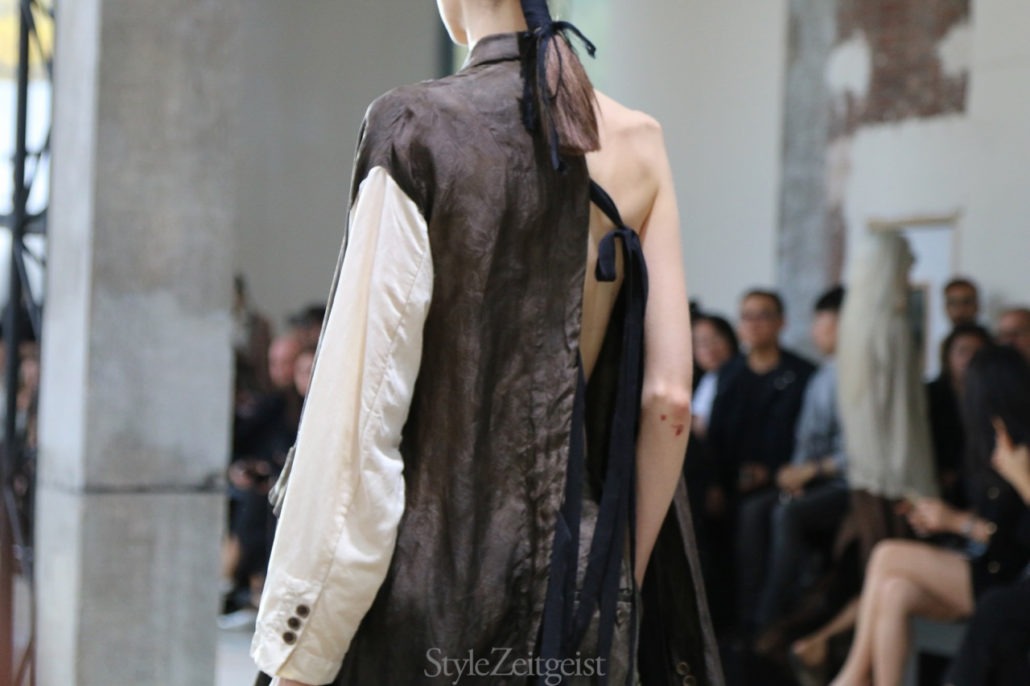 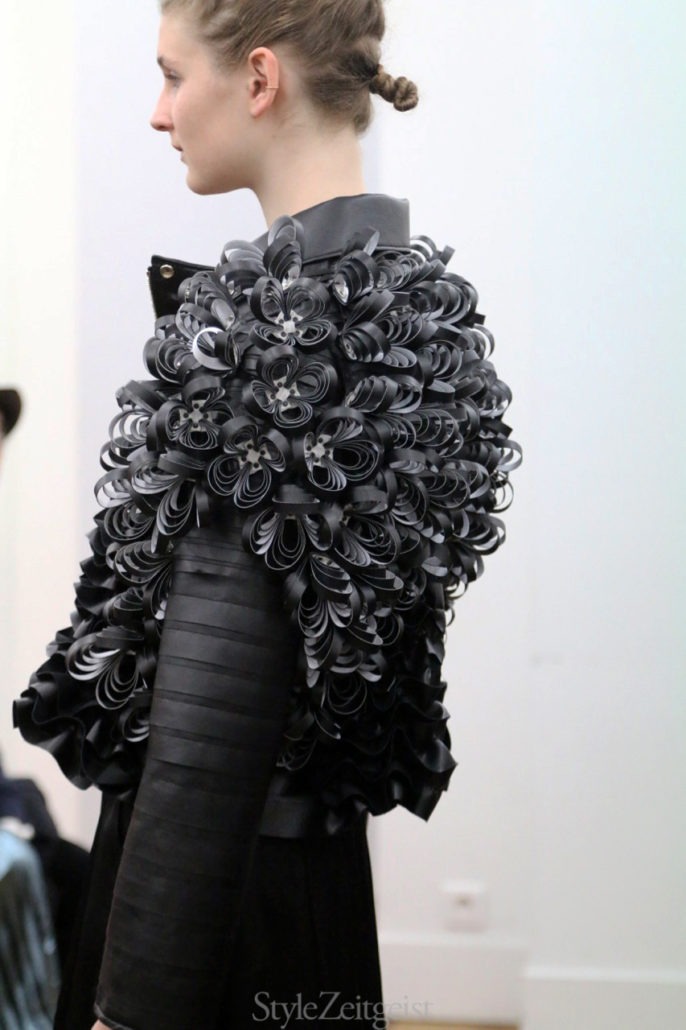 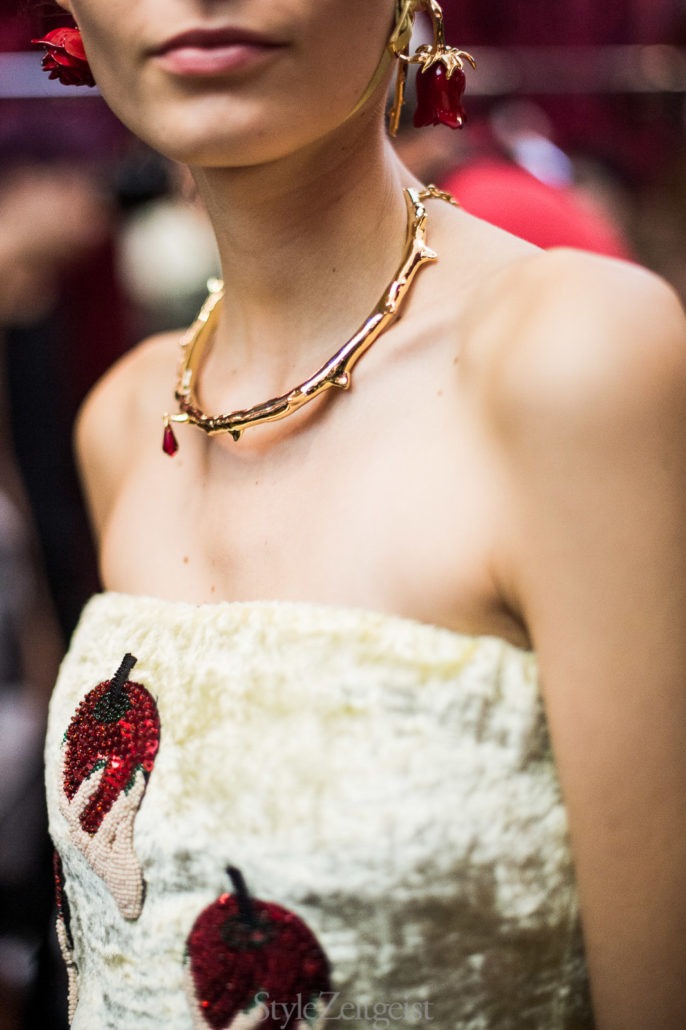 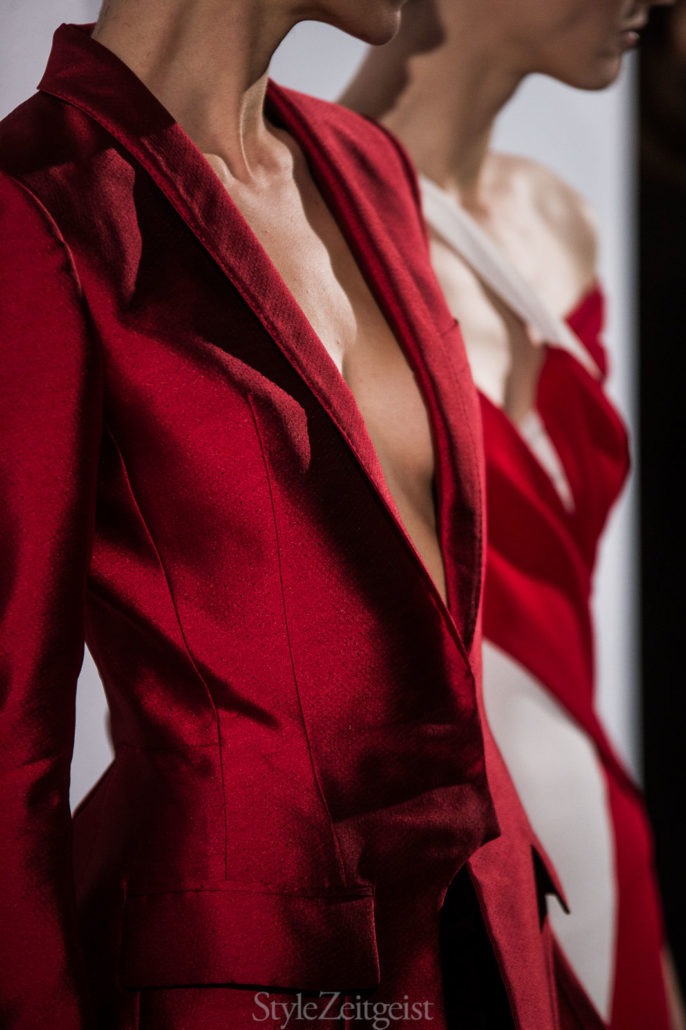 New York Fashion Week has become such a dispiriting spectacle of banality and celebrity entertainment that I did not go to a single show. So, on to Paris, the home of real design, or, more accurately, a place where real design is shown. My first show was Dries Van Noten, and It was all pretty, pretty, pretty – without cheap pretensions or sloganeering (see: Dior) – fashion as fashion. Van Noten’s explosions of color were gratifying as usual; though my favorite looks were where he cut colorful inserts into the black or had otherwise matched the monochrome with the colorful. The clash was visceral, no questions asked, no answers needed. Van Noten is one of the few designers whose main business is clothes and not accessories, bags, and perfume, and he has shown us why for the 101st time.

If there is an heir apparent to Helmut Lang, it’s most certainly not Shayne Oliver but Yang Li. This season Oliver was tasked with reinterpreting the work of that avant-darling of the 90s, the period when people still took fashion seriously. What came out was cheap trash. What Oliver does not get, or does not care about, is that Lang’s kink lay in subverting formality, and that’s what made it so delicious. Instead, what we got was Hood By Air but with a different logo. Li, on the other hand, completely gets the Lang vibe. Not that Li needs to be compared with anyone, as his own design lexicon grows stronger with each season. This collection saw a stab at prints that were simply magnificent. That they were rendered on tailored dresses and coats and not on cheap sweatshirts made them all the better. The studded shoes and studded bracelets that coiled around the models’ biceps added to the menace below the tailored surface.

Li is one of the few designers who have been successful at marrying fashion and music, and in this he goes a step further than simply printing lyrics or album graphics on garments. Music performances are becoming a Li signature. In the past it was Genesis P-Orridge of Throbbing Gristle and Blixa Bargeld of Einsterzunde Neubauten. This time it was Michael Gira, of the Swans, who performed an acoustic set, as models mingled with the audience. Fashion is most interesting when it has a cultural dialogue with other creative media, and that’s what Li brings to the table.

My next day began at Ann Demeulemeester, where I am sad to say Sebastian Meunier looked like he was spinning his wheels. I thought that he has found his stride during the past two seasons in putting his own stamp on the brand DNA, but striding means moving ahead. I could not tell much difference between this collection and the two before, and I would like to think that I am no stranger when it comes to discerning the subtleties of the Demeulemeester code.

Rick Owens was case in point, showing a collection in which he continued to build on his dress-as-sculpture direction. Everything did seem sculpted, not draped, on the models, and I particularly loved the pleated garments, which looked very fresh. As far as the runway goes, wearability does not seem to weigh heavily on Owens’s mind these days, and by the end of the show he went full-on Comme des Garçons with a series of towering creations that could not exactly be called clothes. A lot of what Owens showed were not exactly dresses, nor skirts, nor tops, but something in-between. That sly in-betweenness is very Owens indeed; his clothes are often pretty hard to frame, and I think it’s deliberate, a part of Owens’s playful-serious creative dichotomy.

Friday morning the Chinese designer Uma Wang presented an utterly ethereal collection at Palais de Tokyo. What I like about Wang’s work is how she makes heavy brocades look light and airy, which is quite a feat. As far as colors go, this time the accent was on olive, and Wang seemed happy to play with its many shades. Like Yamamoto, Wang is also good at making things sexy by hiding instead of revealing, which makes her clothes all the more alluring.

I anticipate few shows with the kind of trepidation I reserve for Undercover. When you get bored with fashion Jun Takahashi has an uncanny ability to pull you back in. And so it was this time. Takahashi sees that our world is upside down – the fools are in power everywhere from politics to pop culture to the media, and, yes, fashion. Or, rather the world is inside out. And so Takahashi made an entire collection made of pieces that were not just reversible, but literally two garments in one. Each pair of models he sent down the runway was wearing the same  exact outfit, only one of them was turned inside out. It was not only a technical achievement, but also a conceptual one. Twins and dopplegangers, the products of duality were on Takahashi’s singular mind, in the twins from The Shining, visually immortalized by Stanley Kubrick, and Cindy Sherman, the performance artist who has made a career out of slipping in and out of multiple personalities. “Cindy, she has a double life; there is her as an artist, and then there is her in real life,” Takahashi said backstage about the artist whom he has met for the first time six years ago and has remained on friendly terms since.

At Yohji Yamamoto later the same night the mood was elegiac, or sleepy. You cannot tell whether Yamamoto was serious or just messing with us, which was in tune with his character. It was 9 p.m., and the tired audience was treated to a long, slow-paced show set to strumming acoustic guitars at low volume. Many of us perhaps would have fallen asleep if it wasn’t for the lushness of the clothes Yamamoto presented. The old master has proved for the umpteenth time his ability to dig deep into a vocabulary that would have rendered a lesser designer hapless a long time ago. It was signature black and red as far as the “color palette” goes, and the multitudes of buttons and eyelet closures made the clothes sexy if you have imagination enough. Yamamoto has said in the past how much beauty and sex appeal he has found in a woman’s back, and some outfits with their covered front and exposed back confirmed as much. It is still rare to see a straight male designer create clothes for women, and even less so one who is unafraid to show both his respect and desire for them at the same time.

Things were much more overtly sexier at the Haider Ackermann show next morning, where the designer toned down his slouchy rolled-out-of-bed-like-this appeal in favor of body-hugging cropped tops. The change was welcome, the direction less so. But that was the second part of the show. The first part was full of fantastic structured coats in red-and-white and red-and-black that were beyond fabulous, and Ackermann is probably the only designer who can make me write the word “fabulous” without cringing.

But before that there was the Junya Watanabe show, where the Japanese designer has managed to make the Finnish company Marimekko, known for its domestic cuteness, look punk. I was glad to see Watanabe move away from his experiments in origami and into something more relatable, and this worked well. On a side note, believe it or not, Comme des Garcons was relatable as well – not on the runway but in the showroom, where Kawakubo’s fantastical creations were subdued into shapes that were both wearable yet intricate. I don’t know what they feed the pattern-makers at that company, but their genius never ceases to impress.

The pattern-making-as-art Comme des Garcons trifecta continued next morning when Kei Ninomiya showed his Noir collection at the company’s showroom on Place Vendome before forty or so guests. No soundtrack, no lighting, just the clothes constructed with mind-blowing methodology. There were dresses that were made of black elastic rings stuffed with white tulle, harnesses macramed from PVC, jackets cut from strips of vinyl that were intricately twirled that they seemed to be blooming. Backstage Ninomiya explained that he was using white for the first time in order to highlight the black as construction base. Why this stuff isn’t in museums yet is beyond me.

And so it continued with the Japanese feats of construction until the end, my last show being Sacai. Chitose Abe is of the CdsG school of sartorial engineering, and her signature contrasts in fabrics and aesthetics were on full display. I favored the first half of the show more, in which she juxtaposed the hardness of camouflage and denim with the softness of silk and lace. The second part of the show veered off a bit too much into the kawaii territory with florals galore, but it was not a buzzkill.

And that is that. It was a solid season, one in which the designers once expects to deliver did just that, and in today’s seen-it-all fashion climate that’s a good thing.

HOW I STOPPED WORRYING AND LEARNED TO LOVE WOMEN’S CLOTHES
May 11, 2020