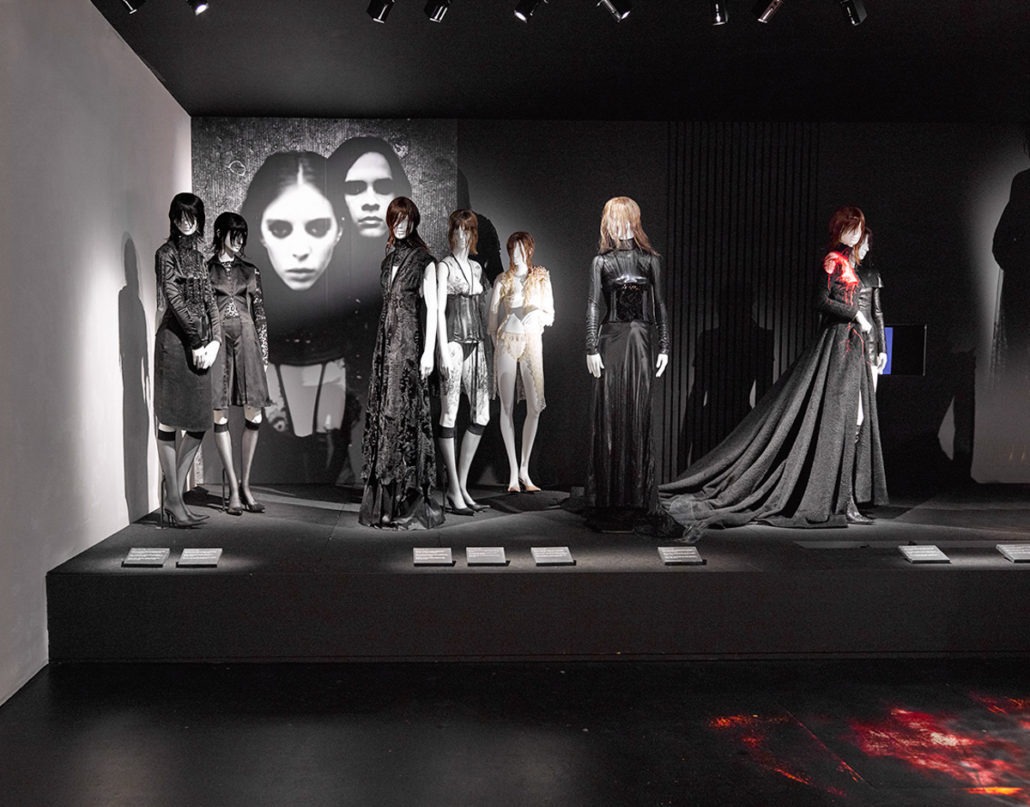 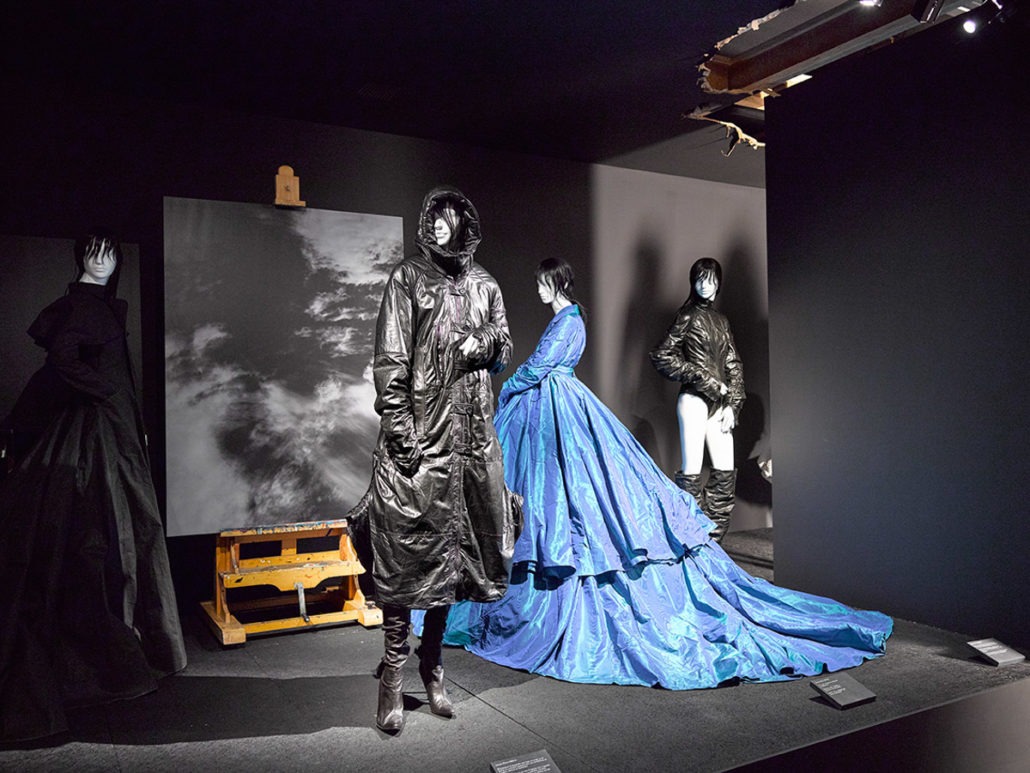 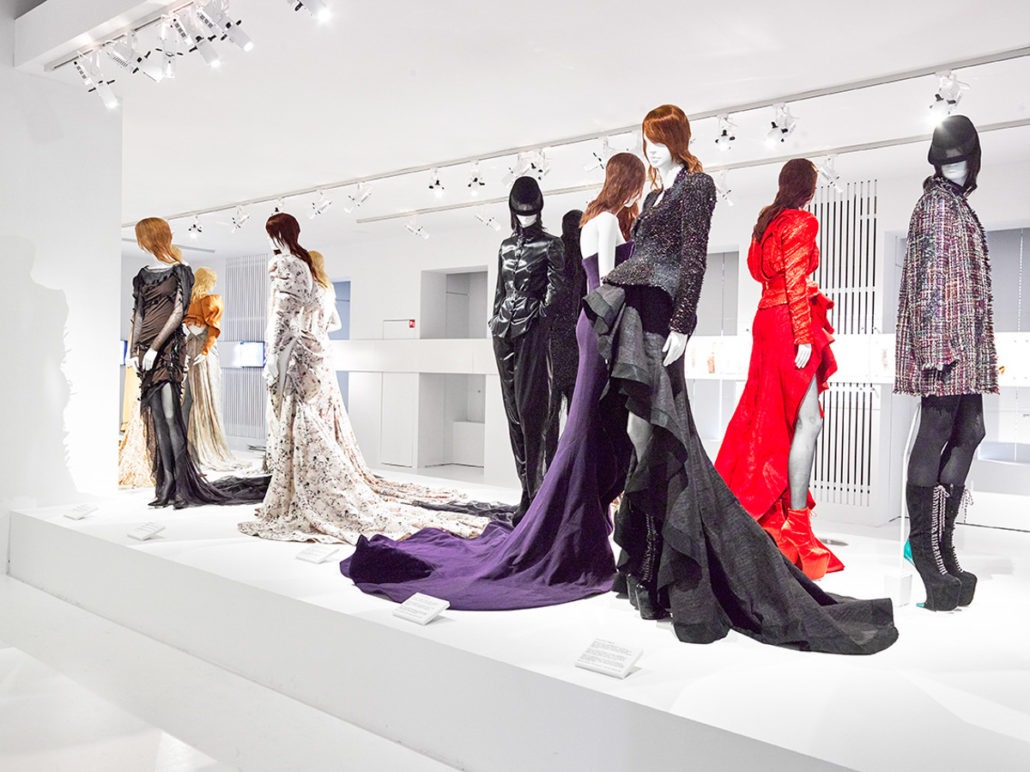 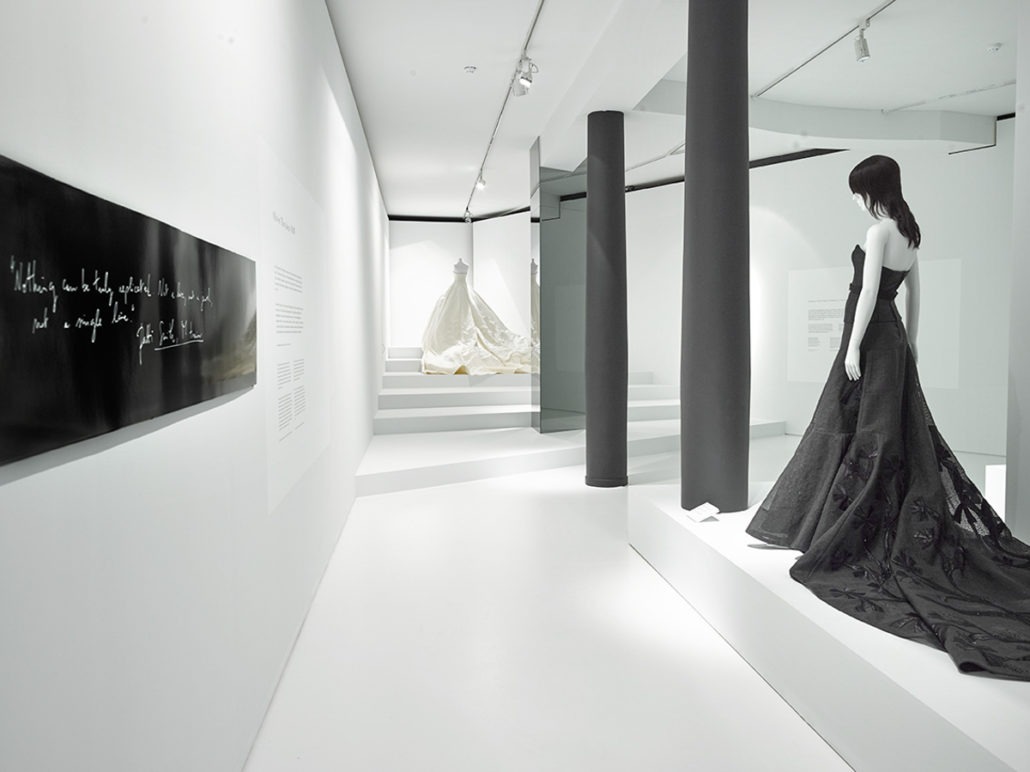 Theyskens, who began designing in the late 90s, followed firmly in their footsteps, the fact that he willingly admitted in a conversation in Brussels the day before he walked us through his exhibit in Antwerp (that’s the beauty of living in a small country). At one point in the conversation he mentioned McQueen opening the floodgates of creativity by giving those ball gowns a gothic edge. The fact that Theyskens was so free about acknowledging another designer’s influence made me think about two things. One, how unnecessarily hung up we get about, to borrow a term from Harold Bloom, the anxiety of influence in fashion. Two, how secure Theyskens must, and should, feel about his own achievements.

I say “should,” because Theyskens’s own work is so fantastically strong, and seeing so much of it in one place only reinforces that feeling, especially for someone who has only seen it in pictures. The MoMu exhibit is organized chronologically, which is a no-no for most museum fashion shows, as that branch still desperately longs for acceptance in the larger museum community. Art curators still sniff at design curators. Fashion museums are still at the bottom of the museum hierarchy. And so, themes are needed and needed desperately. Elaborate explanations and academic theories are needed desperately.

But, sometimes, looking at phenomenally beautiful clothes is enough. Therefore, unlike some critics, I have no qualms with the chronological order of the exhibit. Nor do I have qualms with its disarmingly simple idea reflected in the title “She Walks in Beauty.” Because beauty is at the center of Theyskens’s exhibit, just like it is at the center of his work. Such a straightforward approach seems somehow if not exactly radical than refreshing today, when so much in fashion is based on the ugly-made-pretty irony. There are no shaved heads or ill-fitting bluejeans on display, no oversized hoodies with logos and no “Dad” sneakers. Instead, what you see is the awe-inspiring skill of a true dressmaker who dragged haute couture into the 21st Century.

Theyskens’s talent was recognized early on. Madonna was an instant fan of his sweeping, gothic gowns. So were the Smashing Pumpkins. Singlehandedly, Theyskens made hook-and-eye closure into the sexiest thing fashion had to offer. My favorite piece in the exhibit is a black silk gown with two slits on the chest that make a cross, held together by hook-and-eye.

Sometimes early success can be a double-edged sword. Theyskens was actively courted in the early aughts, when fashion conglomerates were busy resuscitating moribund legacy brands. After seeing McQueen and Galliano succeed at Givenchy and Dior, hiring Theyskens was a no-brainer. And so he went to Rochas, discontinuing his brand in the process, and then to Nina Ricci. Both of these stints are represented as sections of the exhibit, and if they don’t quite rival the cultural relevance of Theyskens’s early work, they do so in their execution.

When his contract at Nina Ricci came to an end, Theyskens unexpectedly and to much chagrin of fashion critics and many of his fans, went to design for Theory in New York. This was widely seen as a waste of Theyskens’s formidable talents, and it was made even worse by the fact that even though he was often able to translate his haute couture vision into everyday wear, you couldn’t actually find those clothes in Theory stores. His collections seemed like marketing exercises that let Andrew Rosen peddle bland office-wear that was now supposed to magically acquire designer edge. Understandably, the Theory part of Theyskens’s career gets short shrift in the exhibit, with only a couple of outfits on show.

The exhibit ends with some looks from the resurrected Olivier Theyskens brand. Theyskens is back to being his own boss, and he now faces a serious challenge. Fashion has largely moved on from where it was when Theyskens did his most brilliant work, and he’ll have to find a new balance in order to remain relevant. You can see that in the clothes displayed, the paired down, subtler versions that are undeniably stamped with his signature. For now the most pressing question remains, if you rebuild it, will they come?

Oliver Theyskens – She Walks In Beauty, MoMu Antwerp, through March 18th, 2018. All images by Stany Dederen, courtesy of MoMu