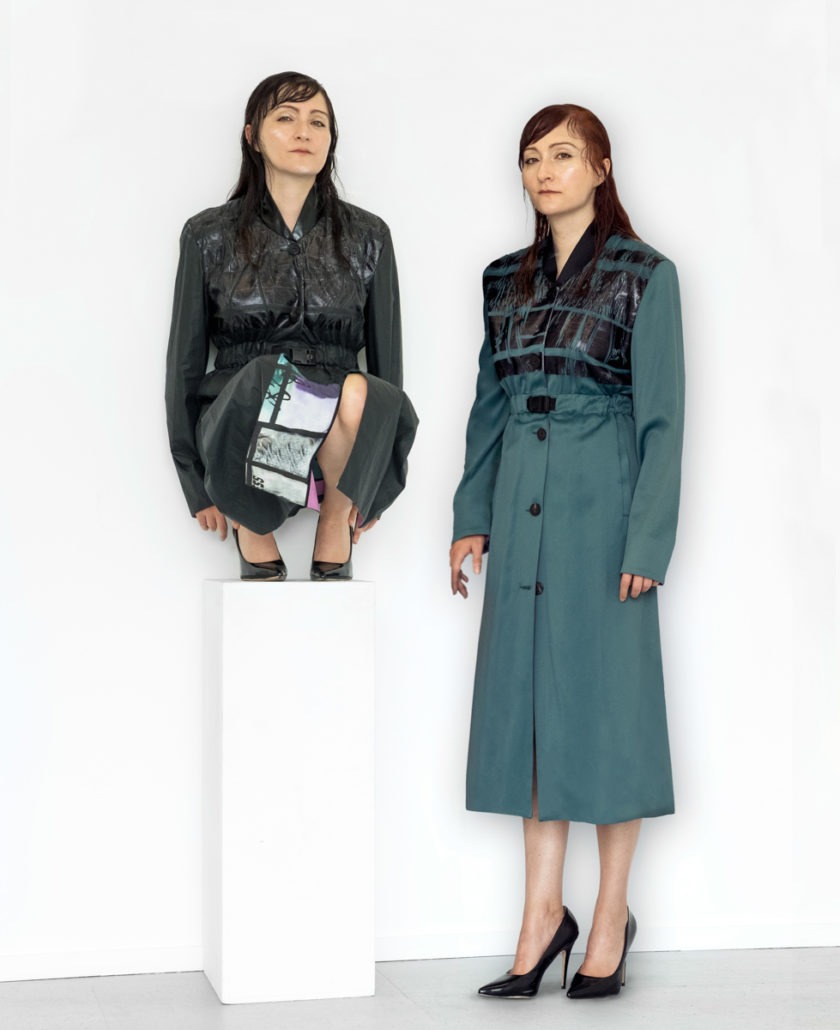 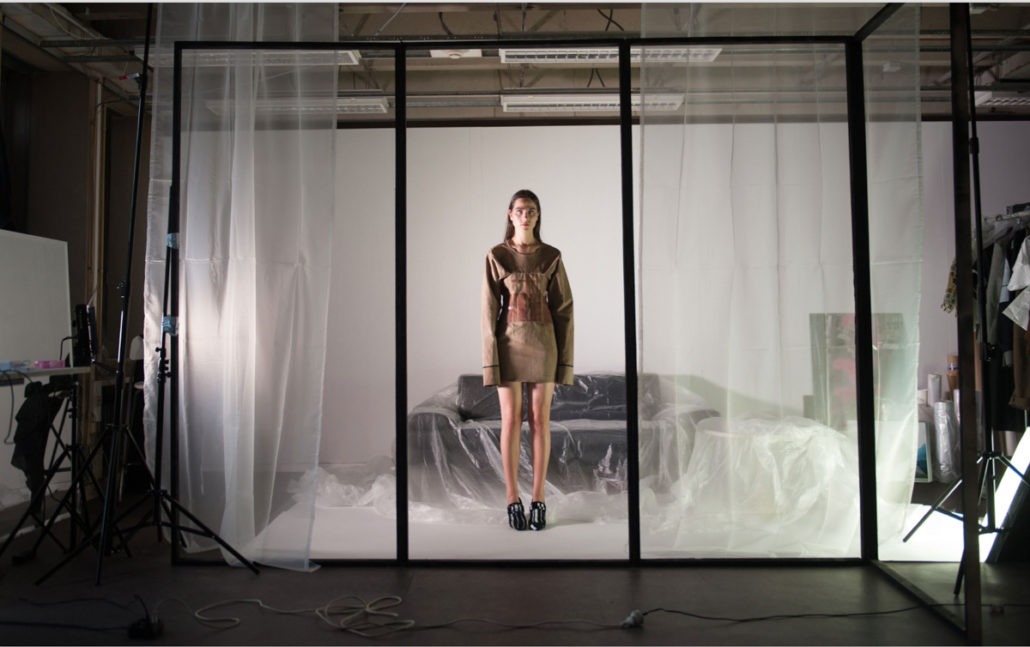 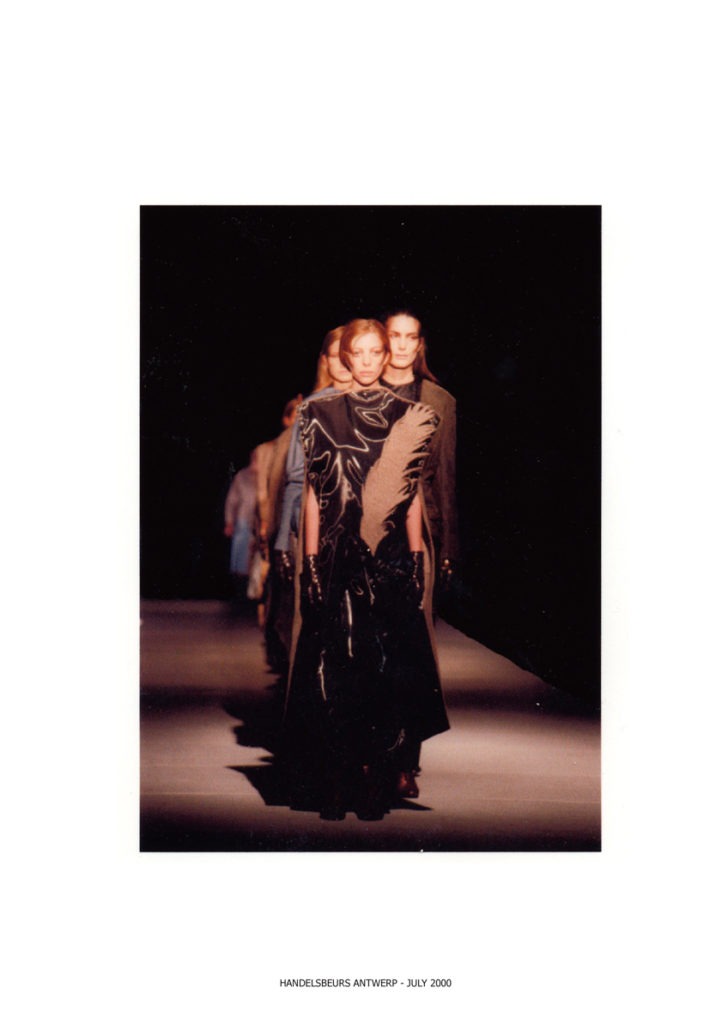 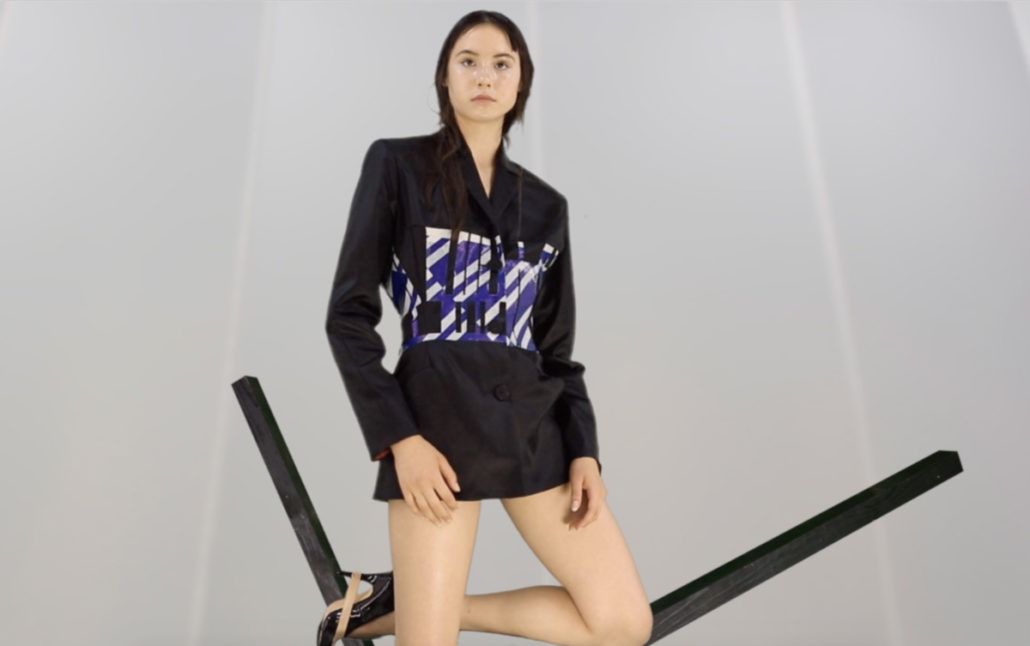 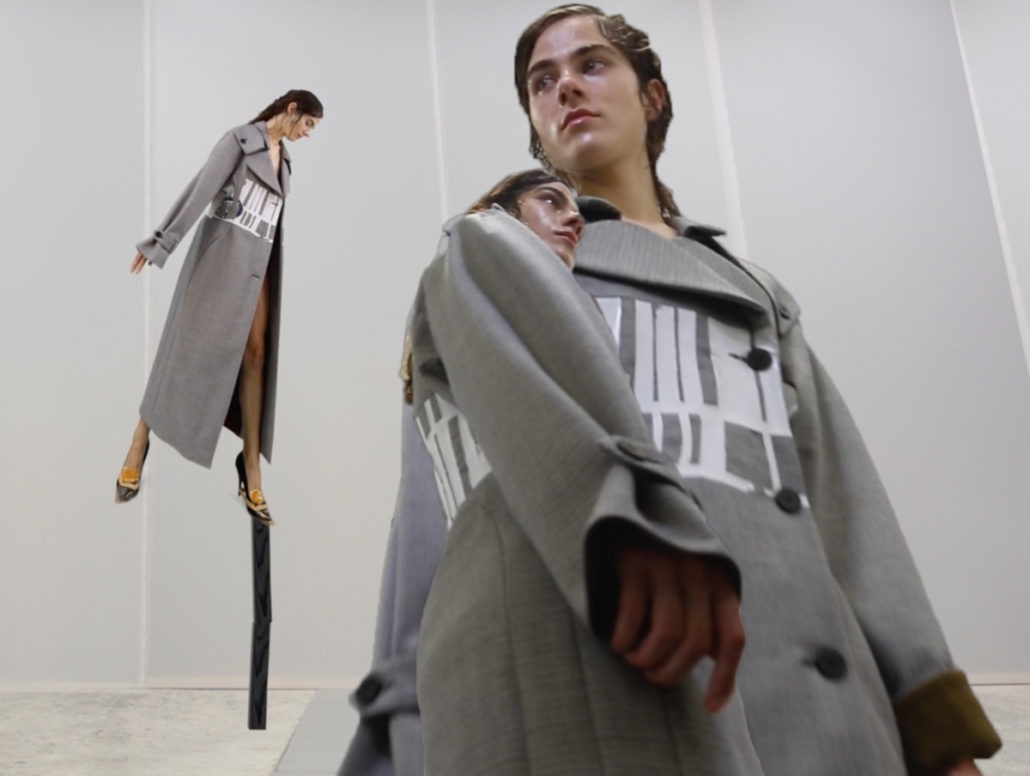 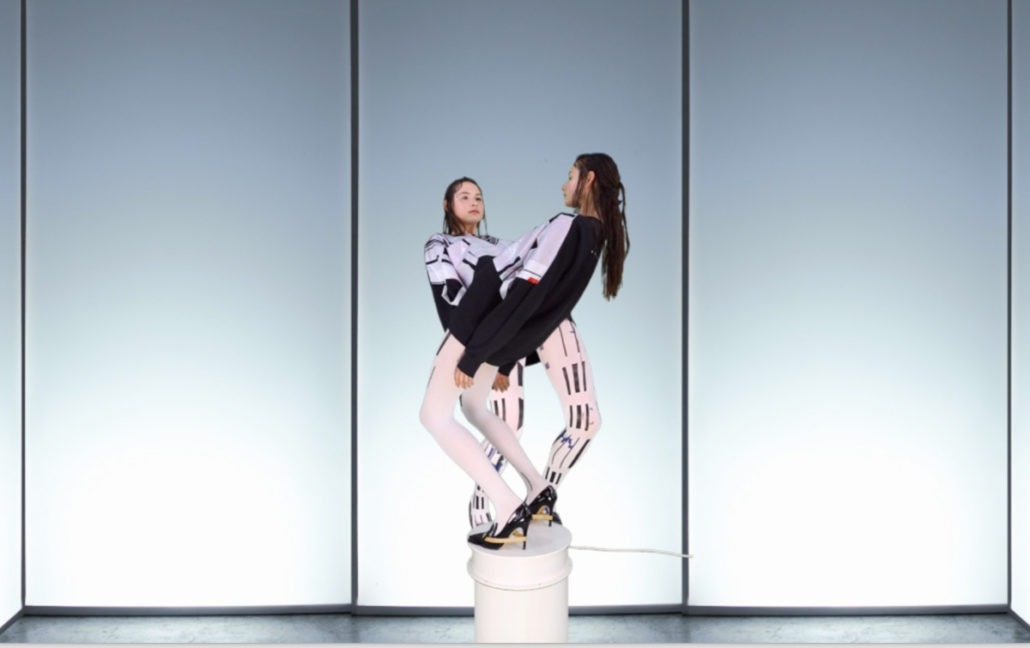 The Capara sisters work on their fashion line in a brutalist building in the center of Antwerp that the city’s government rents out to designers and artists. The Bosnia-born twins, Olivera and Vera, run a skeleton crew, with two assistants and a couple of interns for their women’s line, CAPARA, which ranges from complicated, off-kilter tailoring to sweatshirts and tees produced in collaboration with Fixmer/McCarthy, the industrial techno project from Douglas McCarthy, the frontman of Nitzer Ebb. On a recent visit in November, the bare space contained several long tables and a couple of racks with Capara’s latest “drop.”

For the past year the design duo eschewed the traditional seasonal fashion model, offering capsule collections of eleven pieces they release in limited edition on the 11th of every month on their website. Besides designing, the Capara sisters pour most of their resources into image making that accompany each drop. Their website is refreshingly different from the cookie-cutter e-commerce platforms that the Internet is awash with and is a testament to the sisters’ creativity that has long been known in Antwerp’s tightly-knit fashion community, but rarely outside of it.

It’s hard to describe CAPARA’s clothes in words, except to say that they demand closer inspection. They are neither paired down in that tired “classic with a twist way,” nor complicated for complexity’s sake. Rather, they look like a product of long, deliberate thought process. “We often start with one idea, an image, and work from it. And the image can be completely mundane, even banal,” says Olivera. In the current series of drops the sisters were fascinated by an image of a man surrounded by plastic bags. The quotidian nature of plastic struck them as very much out of line with what fashion should be. “We want to combine our love for something very dark with something very classic. We like to take luxury and fuck it up,” says Olivera.

At the same time, there is also something gentle about their work – it’s far away from the cheap sex and glamor that so much fashion still revels in, and it’s refreshingly far away from the logomania that’s now back with a vengeance. These are not clothes made for Instagram, but for women. “We like working around the garment, something we learned from Martin Margiela,” says Olivera. “We don’t want to make clothes just for show. It’s a product that has to work.”

The Capara sisters were born in Sarajevo, but grew up in Germany. As teenagers they were enrolled into a high school that specialized in sports and science and they studied biochemistry. “No one in our family or our surroundings had a creative bone in their body,” says. “We felt like we had to do something different. But there was one saving grace in our high school education – our teachers stressed that we should be ourselves.” The twins found refuge in electronic music and techno clubs of Stuttgart. Their first concert was Depeche Mode, from which they went on to The Cure, New Order, and Front 242.

Before graduating high school the sisters began wondering what they should do next. They were in the process of deciding between architecture and fashion, when they stumbled upon an article about the Antwerp Six and then saw a Martin Margiela on TV. “The article impressed us very much, and Martin’s show just blew us away,” says Vera. “The choice became very clear.” The twins enrolled into a fashion school in Germany and then took a job at a German sportswear company.

But it was all very technical, and they wanted more. The Antwerp Royal Academy’s fashion program was ground zero for fashion talent, and so they applied and were immediately accepted. “We had an amazing time at the academy,” says Olivera. “There were such interesting designers around – Bernard Willhelm, Veronique Branquinho, and Haider Ackermann. Walter Van Beirendonck was our teacher, and Linda Loppa was brilliant as the head of school. Everyone was searching for their own creative voice.” Antwerp was still incredibly intimate, a time when you could meet Raf Simons at a party at an artists’ squat, like they did. The sisters showed their graduate collections in 2000 – there were nine graduates out of the incoming class of over seventy. Their collection was very gothic – Olivera took her inspiration from cemetery statures and Vera from stained glass imagery in churches – full of leather, brocade, and felt. Two weeks later they got a call from Dries Van Noten offering them a job in his design department. “At first I thought it was a prank and I hung up on him,” says Vera. “So, he called again, and of course after realizing that it was really Dries, I was totally shocked.”

After working at Dries Van Noten, the sisters left in order to present a collection at the Hyeres fashion and art festival in France, which they subsequently showed in Paris. Around the same time Jenny Meirens, Martin Margiela’s partner, was scouting for new talent in Antwerp, when she came across the twins’ work. She hired them to design Margiela’s artisanal line, arguably his most prestigious and iconic work where existing garments were reworked by hand into new ones. “It was really a dream job,” says Vera, citing Margiela as one of the major inspirations. “Working with Martin was so easy – he is such a nice, down to earth person, and creatively we were on the same page. We would go to all these flea markets and clothing recycling shops to hunt for old clothes.” The sisters worked with Margiela for four years. One of their most memorable creations was a jacket made from the uppers of orthopedic old lady sandals.

But it was a time of upheaval at Maison Martin Margiela. The company was sold to Diesel’s Renzo Rosso, and everyone knew that Margiela himself would leave as soon as his contractual obligations expired. The sisters departed the maison in 2007, two months before Margiela’s retirement. They went to New York for a while, planning their next move. One day Vera received an offer from Raf Simons to work at Jil Sander on its leather products. She took the opportunity, having known Simons from his early days in Antwerp. Olivera also returned to Europe, taking a design position at Delvaux, the storied Belgian maker of luxury leather goods.

At last, in 2010, the sisters decided to go on their own. They returned to Antwerp, to where the fashion terrain was intimate and familiar. It was exhilarating to work on their own line, but there were also hard and swift lessons to learn. “What we did not realize while at the Academy and working for others, is how easy it actually is to work within an existing structure, versus doing everything on your own,” says Vera. It was especially tough in 2010, when it seemed that the only successful brands were those backed by major fashion conglomerates. The few Belgian success stories, like Dries Van Noten and Ann Demeulemeester, were created twenty-five years prior. The second golden generation of Belgian designers of the 90s was decimated – Jurgi Persoons, Veronique Branquinho, Xavier Delcour, and Dirk Schonberger were among those who closed their doors. But the Capara sisters persisted, with help of a friend who invested in their brand.

Last year the designers decided to change their business model from the usual seasonal deliver/showroom display. Instead, they decided to deliver capsule collections each month, selling them through their website. They have poured significant resources into the CAPARA website, which serves as not only their e-commerce platform, but also as their B2B channel. All clothes are presented digitally – stores have an opportunity to view the clothes two weeks before the end customer. Fabric swatches are delivered simultaneously in order to make the selection easier.

John Skelton, the founder of LN-CC, was one of the early supporters of the brand. “Somebody mentioned there was a brand from a couple of girls who were ex Margiela/Raf, and that I would most probably like it. The references were obviously of interest to me personally, so we went and had a look. As soon as I saw the collection and met the twins I knew this was my kind of brand. So we moved forward without hesitation and wrote an order,” he said. Skelton and the twins have recently reconnected and he now helps them with occasional advice. “There is no doubt they come from great fashion stock,” said Skelton when I asked him about his attraction to the brand. “Their work is detailed, extremely considered and consists of a lot of pre-development work before a piece is even constructed. I have said it from the moment I saw the first piece; this is extremely intelligent product. You have to have a certain understanding of clothing to actually understand what it really is. But when you do have that understanding the pieces just sing to you. And I loved the sound of what I heard.”

It’s still too early to tell whether the drop model will be a complete success, but the Capara sisters remain sanguine. “We now feel optimistic about independent designers. So much fashion looks the same today; I think it’s time again to create things in a personal way,” says Vera. “We have learned to create our own reality, instead of waiting for it to happen to us.”

All photos courtesy of Capara.